VIII. The Struggle for Glory 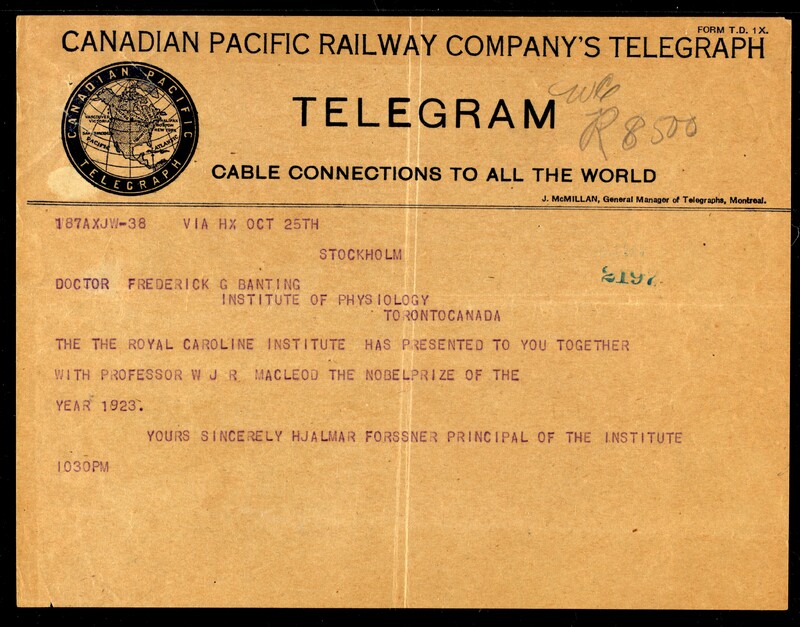 "If every discovery entailed as much squabbling over priority etc. as this one has it will put the job of trying to make them out of fashion,” an exasperated Macleod wrote in 1923. The problem was not just that three of the members of the insulin team were young Canadians who had a tendency to behave under pressure like hockey players. It was not just that the pressure was almost unbearably intense, with human lives and scientific immortality clearly at stake. It was not just that Banting’s personal insecurities and scientific inadequacies predisposed him to dislike Macleod and imagine conspiracies everywhere. The problem was inherent in the discovery process itself.

Afterwards it was clear that many extracts of pancreas used by researchers, in Toronto and elsewhere, contained the internal secretion. Banting and Best’s certainly did. So did most of the extracts used by Zuelzer in Germany, Scott and Kleiner in the United States, and Paulesco in Romania. What did it mean to “discover” something you already had?

Basically, it meant supplying convincing proof that an extract contained the internal secretion. Reasonable people could disagree about the stage in a research project at which convincing proof had been supplied. Banting and Best and those who felt they were the sole discoverers of insulin, later claimed that the blood sugar tests on dog pancreas in the summer of 1921 were adequate proof of the discovery. The problem with that line of argument was (a) lack of evidence that others found Banting and Best’s work convincing; (b) the fact that other researchers, notably Paulesco and Kleiner, had previously done as much or more with their extracts as Banting and Best did. By that standard, they rather than the Canadians should be credited with the discovery. (Many Romanian scientists do believe that Paulesco was the real father of insulin). To most of those involved in diabetes research at the time, proof of the value of the Toronto work came at a later stage — possibly as early as Collip’s glycogen experiment, certainly when the clinical testing on Leonard Thompson succeeded. If this was the discovery of insulin, it was clearly not simply Banting and Best’s work, but rather a collaborative process, drawing on contributions made by all four members of the team.

If Banting and Best’s extract had succeeded on Thompson on January 11, their exclusive claim might have been strengthened, but it did not. Their longevity experiment on dogs was also important in buttressing their claims, but was not a success. The first dog died; the second lived on extract until after the Thompson tests, but when killed was found not to have been completely depancreatized — it might have stayed alive without injections.

The insulin research was a process that began with a crude and unphysiological idea and evolved through increasing stages of sophistication to successful clinical trials. In retrospect, and in comparison with the situation of other researchers, the Toronto workers were able to draw on impressive resources. Banting got supervision and help from one of the world’s experts in carbohydrate metabolism. He was given skilled student help, precious experimental dogs, and laboratory facilities among the best in North America. At a critical stage in the work an absolutely first-class biochemist was added to the team. Money and supplies were never a problem. Improvements in methods of doing serial blood sugars, worked out by researchers in other centres, were crucial in making the Toronto research possible.

The discovery of insulin was not the work of unfunded and unappreciated geniuses working under intolerable conditions. It was a frontal attack on the problem of the pancreas using first-class facilities, personnel, and techniques. The people of Toronto, Ontario, and Canada, had funded a great national university in the hope that just such breakthroughs might emerge. Banting did not appreciate that when he walked into Macleod’s office that day in 1920 he had found a field of medical dreams.

Banting was utterly determined in 1922-23 not to be upstaged by his senior colleagues. His dislike of Macleod had turned into a view by January 1922 that the physiologist, possibly in league with Collip, was taking over the work. Hence Banting’s insistence on making the extract first used on Thompson. That humiliating failure, combined with news of Collip’s brilliant success in purifying the extract, set the stage for the worst breakdown of the team. Banting and Collip came to blows one night in the lab when Collip refused to reveal the secret of the purification process. All members of the group had to sign a kind of “peace treaty” on January 25 to ensure that the work would go forward.

Personal relations were never fully restored. Banting and Best were not present in Washington in May, for example, for the ovation at the Association of American Physicians. While insulin progressed from triumph to triumph, a highly-political, deeply-byzantine struggle for credit, influence, and support played itself out within the University and in Toronto, Canadian, and even international medical communities. It involved Banting’s struggles to emerge as the clinician who controlled insulin, his friends’ determination to have him honoured as the principal discoverer of insulin, and Macleod’s stubborn insistence on the importance of his and Collip’s contribution to a collaborative discovery process. Officials at the University responded with caution and discretion to the pressures on them. When the Chairman of the Insulin Committee, Colonel Albert Gooderham, asked Macleod, Banting, and Best to supply him with their versions of events, he received three conflicting accounts. They were suppressed for many years.

The campaign of Banting’s friends led to a decision by the government of Ontario to create for him a special Banting and Best Chair of Medical Research at the University of Toronto, the first research professorship in a Canadian university. The government of Canada, in recognition of the discovery of insulin, granted Banting a lifetime annuity of $7,500. Everyone thought he would be in line for a title from the King if Canadians were ever allowed to receive titles again; when they were, in 1934, he received a knighthood. 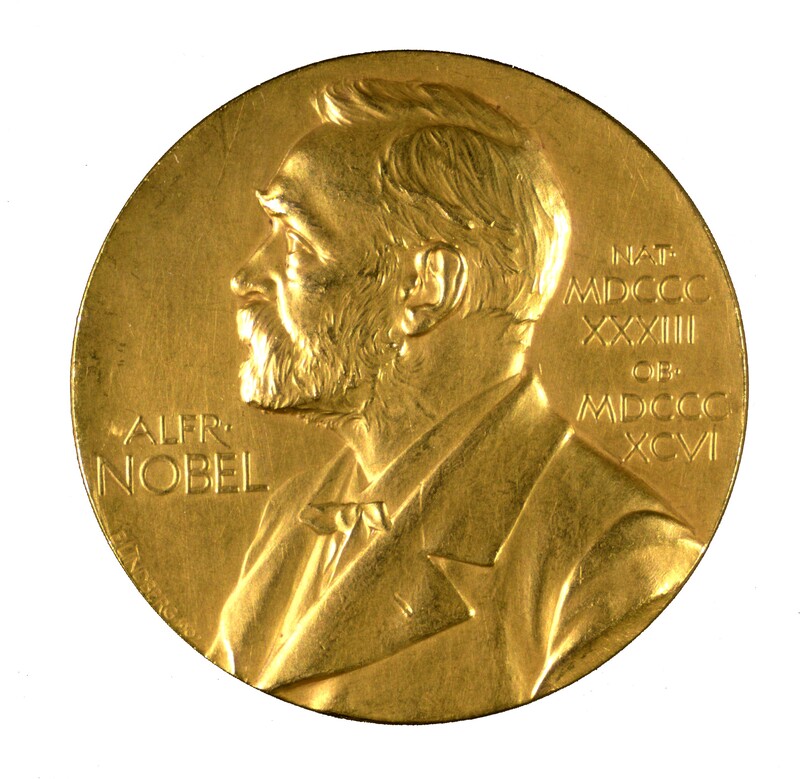 Several distinguished scientists who were invited to nominate candidates for the 1923 Nobel Prize in Physiology and Medicine put forward the names of either Banting or Macleod. Dr. August Krogh, a Danish Nobel laureate who had visited Toronto in the autumn of 1922 (where he learned how to make insulin, leading to the very successful Danish manufacture of the product), nominated both Banting and Macleod for the Prize. Krogh argued that Banting would never have reached insulin without Macleod's contributions. He noted that Collip had made an important contribution, but did not recommend him for the Prize. The Nobel Committee of Stockholm's Karolinska Institute looked into insulin and its discovery very carefully - it was and still is almost unheard of to honour a breakthrough with a Nobel Prize so quickly - had a special debate on Macleod's role, and decided to give the 1923 prize to Banting and Macleod.

Charles Best had sometimes been the odd man out in the struggle for honours. He was by far the most junior member of the team, a handsome, relatively carefree student assistant who had found himself suddenly part of a great medical adventure. He had been involved at virtually every stage in the work, including playing an important role in the rediscovery and manufacture of insulin in Toronto, and he had given vital moral support when Banting was on the brink of collapse and was drinking heavily. Unlike Banting, Best did not have powerful friends or patrons at the University to advance his claim to an equal share in the fruits of the insulin work. Best became increasingly disgruntled when the honours were not equally divided, but had no choice except to rely on Banting’s generosity.

Best was lecturing at Harvard on October 26, 1923. On hearing of the award of the Nobel Prize to Macleod and himsel, Banting telegraphed to Best’s host, Elliott Joslin:

At any meeting or dinner please read the following. I ascribe to Best equal share in the discovery. Hurt that he is not so acknowledged by Nobel trustees. Will share with him.

Macleod received the news at sea, en route to Canada from Britain. On November 7 he announced that he was dividing his share of the prize with Collip. "It would be invidious and quite unnecessary to try to dissect or divide up the work on insulin among the various men who were engaged in it," Macleod told the press. With Banting in a very sour mood about being linked forever with Macleod in scientific immortality, it was possible that enterprising reporters might have revealed the whole story of the fighting among members of the insulin team. But the best-placed reporter covering the story was a young journalist for the Toronto Star who hated the city and wanted to get out of it and make his name as a writer of fiction. Ernest Hemingway later was involved in his own Nobel Prize story.

The University of Toronto awarded Banting and Macleod special honorary degrees at a special dinner for its Nobel laureates, Canada's first in medicine or any other field, on November 26, 1923. One of the distinguished guest speakers, Dr. Lewellys Barker, captured the right note on remarking, "There is in insulin glory enough for all." 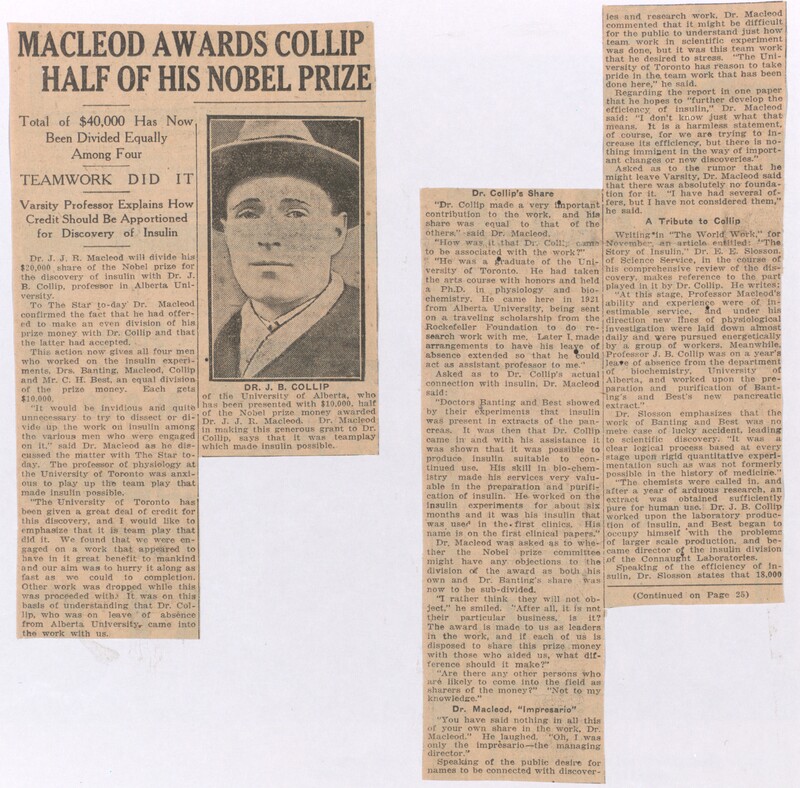