In January 1922, at age fourteen, Leonard Thompson (1908-1935) became the first diabetic to receive injections of pancreatic extract at Dr. Campbell's clinic at Toronto General Hospital. He first received Banting and Best's preparation on 11 January, and then Collip's purified extract on 23 January.

Toronto General Hospital. Patient records for Leonard Thompson. January 1921. (Reproduced from the originals held by The Toronto Hospital)
These records document the first trials of pancreatic extract on a diabetic patient. Leonard Thompson had been admitted to Toronto General Hospital on December 2, 1921, suffering from acute diabetes. By early January he was close to death.

The entries record the first test of extract on Leonard Thompson on January 11 and the dramatically successful second test on January 23.

The extract used in the first test had been prepared by Banting and Best (but is called Macleod's serum in the notes). Although it caused a slight lowering of blood sugar, it contained contaminants which caused an abscess to develop at the site of the injection. The extract used in the second test had been prepared by Collip and appeared to be more potent and purified. After the second series of injections Thompson's blood sugar dropped to normal in one day and his condition showed an immediate improvement.

The extracts were administered under the direction of W.R. Campbell, chief clinician. 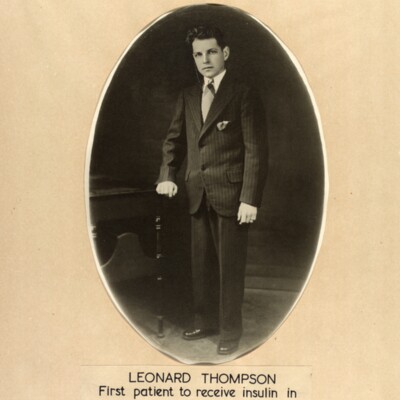 Leonard Thompson lived for thirteen years on insulin. He died in 1935, at the age of twenty-seven, of broncho-pneumonia and complications from his diabetes.