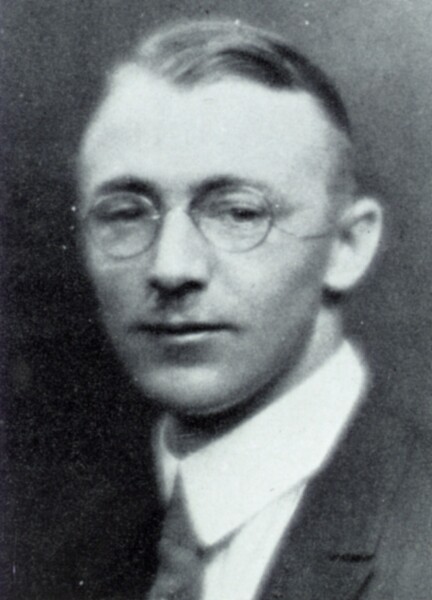 Joseph Gilchrist, one of Banting's classmates, became the first human diabetic to receive the pancreatic extract manufactured by Banting and Best. On December 21, 1921, the extract was administered orally and presented no beneficial results.

Later on, Gilchrist would try each new batch of the extract on himself after it was tested on rabbits, referring to himself as a "human rabbit." 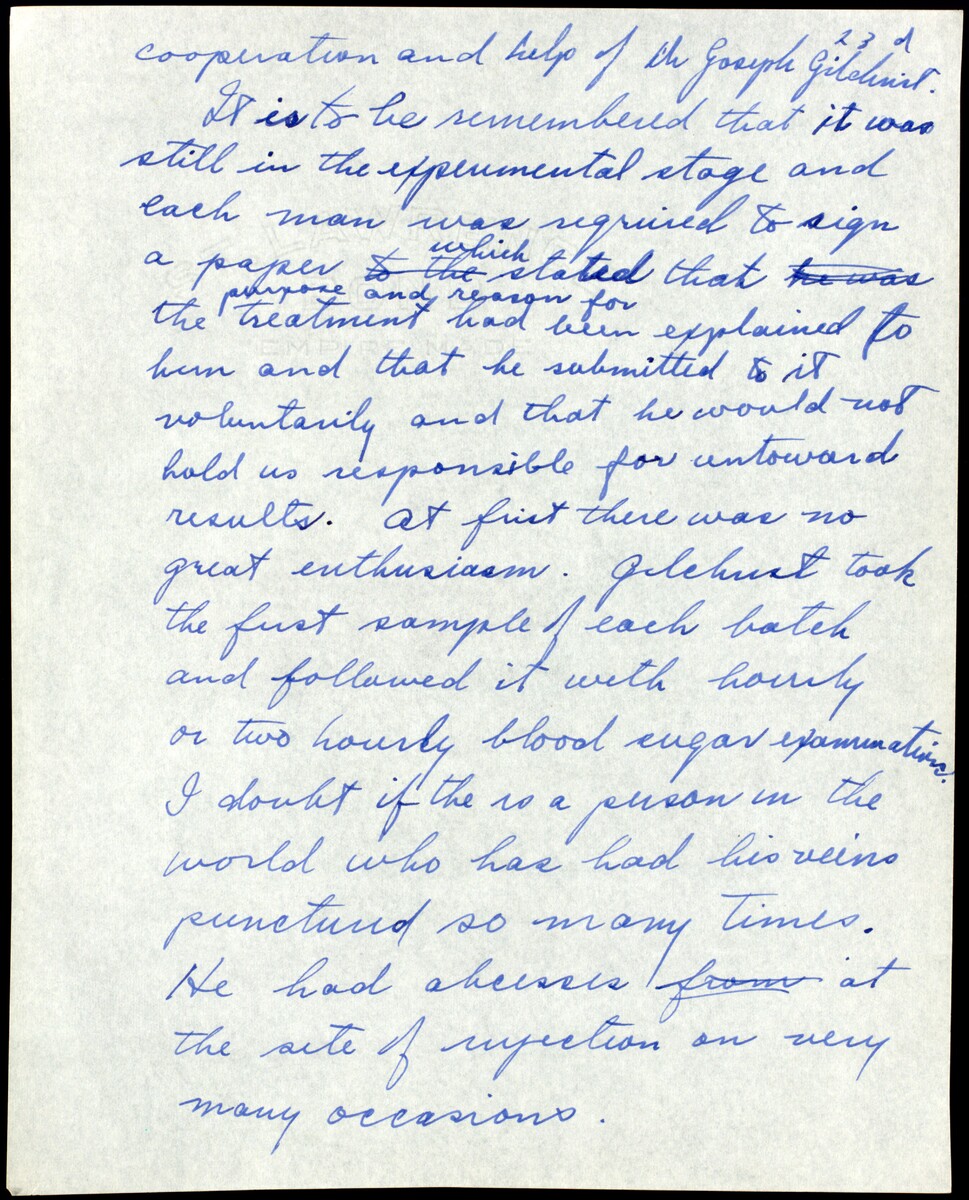 F.G. Banting's personal account: 'The Story of the Discovery of Insulin.' Page 23D.

In Banting's account of the discovery of insulin, he writes: "Gilchrist took the first sample of each batch and followed it with hourly or two-hourly blood sugar examinations. I doubt if there is a person in the world who has had his veins punctured so many times ... He is thus the person now living who has been on continuous insulin treatment for the longest period of time." 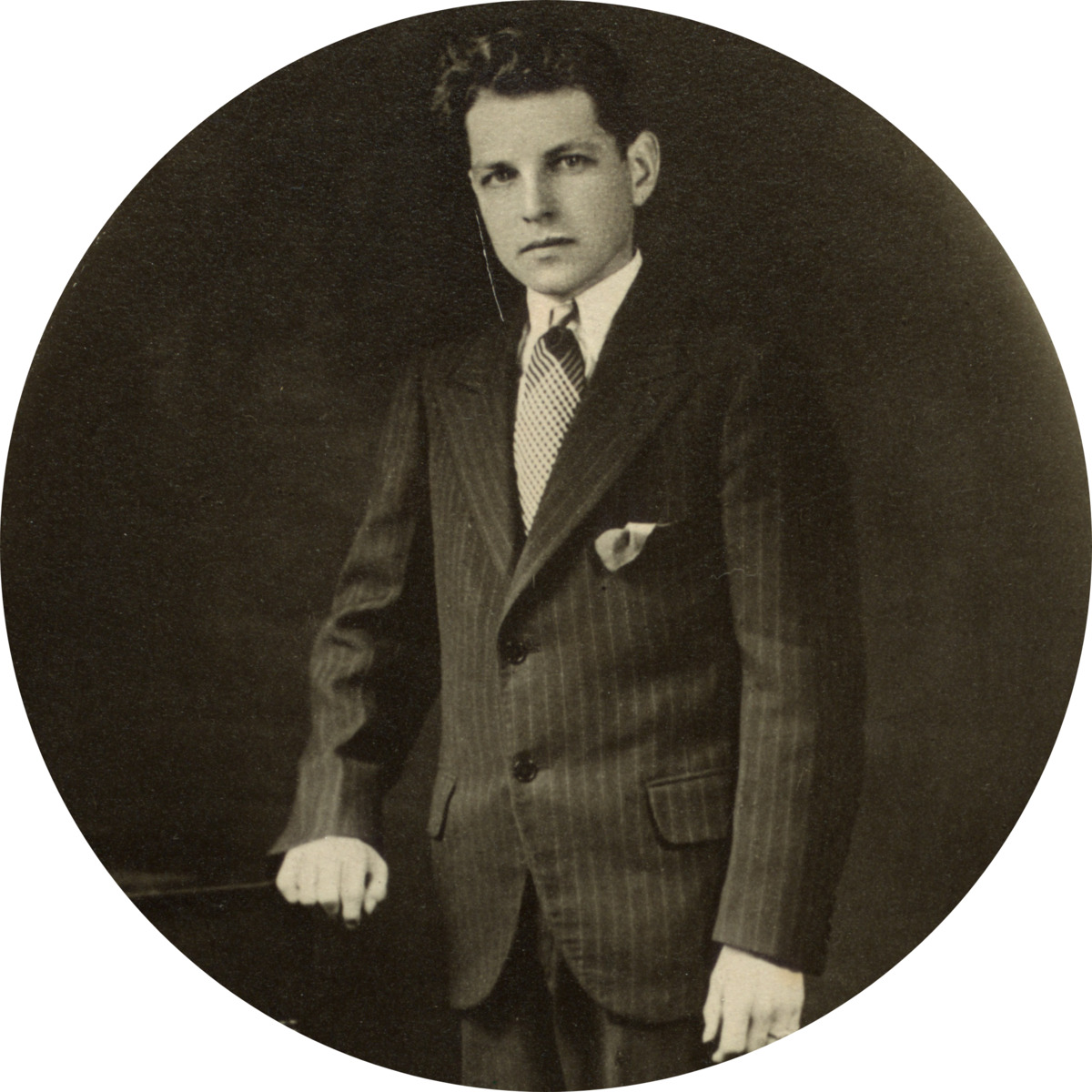 Leonard Thompson (1908-1935) was the first diabetic patient to receive injections of the extract. Thompson, who was fourteen at the time, was a public ward patient in the diabetic clinic Dr. Walter Campbell had founded at Toronto General Hospital under Dr. Duncan Graham's supervision.

Thompson weighed 65 pounds on admission to the hopsital on December 2, 1921. He was pale, his hair was falling out, his abdomen was swollen, and he had the distinct smell of acetone on his breath. A report by Banting, Best, Collip, Campbell, and Fletcher titled Pancreatic Extracts in the Treatment of Diabetes Mellitus (Canadian Medical Association Journal, 1922) further states: "he was dull, talked rather slowly, [and] was quite willing to lie about all day." As Thompson's condition continued to worsen, Dr. Campbell urged his father to let him try Banting and Best's new extract. Thompson's father agreed.

"Best and I carefully tested a batch of extract and calculated the dose for a human. We went to the hospital and remained in the corridor while a houseman injected it into the patient ... We waited around for the first specimens and could hardly contain our suppressed excitement. This was in reality the first human diabetic to be treated " (pg. 52-53).

The extract Thompson received was described as "a murky light-brown liquid containing much sediment, which dissolved to a considerable extent on being warmed" (Macleod and Campbell, 1925).

The first injection given to Thompson on January 11 was administed by Ed Jeffrey, the house physician under the supervision of Dr. Campbell and Dr. Graham. It was not as concentrated as was needed, so other than a slightly lowered sugar excretion and a 25% fall in the blood sugar level, no clinical benefit was evident.

On January 23, Dr. Campbell gave Thompson five cc. of a new extract made by Collip. Daily injections of this extract were made from January 23rd to February 4th, with two exceptions. This resulted in immedate improvement.

This typescript for the second major paper by Banting and Best outlines their experiments from mid-November to the end of January and the conclusion of their longevity study with Dog 33. It was published in the Journal of Laboratory and Clinical Medicine, vol. 7, no. 8 (May 1922).

F.G. Banting, C.H. Best, J.B. Collip, and J.J.R. Macleod. "The Preparation of Pancreatic Extracts containing Insulin." Reprinted from the Transactions of the Royal Society of Canada, 1922.

This is one of five papers by members of the research group presented at the May meeting of the Royal Society of Canada. Two separate methods of preparation are outlined, the earlier method used by Banting and Best and the one used by Collip for the first successful clinical trials.

F.G. Banting, C.H. Best, J.B. Collip, W.R. Campbell, A.A. Fletcher, J.J.R. Macleod, and E.C. Nobel. "The Effect Produced on Diabetes by the Extracts of the Pancreas." Reprinted from the Transactions of the Association of American Physicians, 1922.

J.J.R. Macleod, as spokesperson for the whole research group, delivered this paper on May 3, 1922 to the annual meeting of the Association of American Phsyicians in Washington, D.C. The evidence outlined here convinced the audience of medical specialists that an effective treatement for diabetes had indeed been discovered. This was the first widely publicized announcement of the discovery and also the first time the extract had been referred to publicly as "insulin."