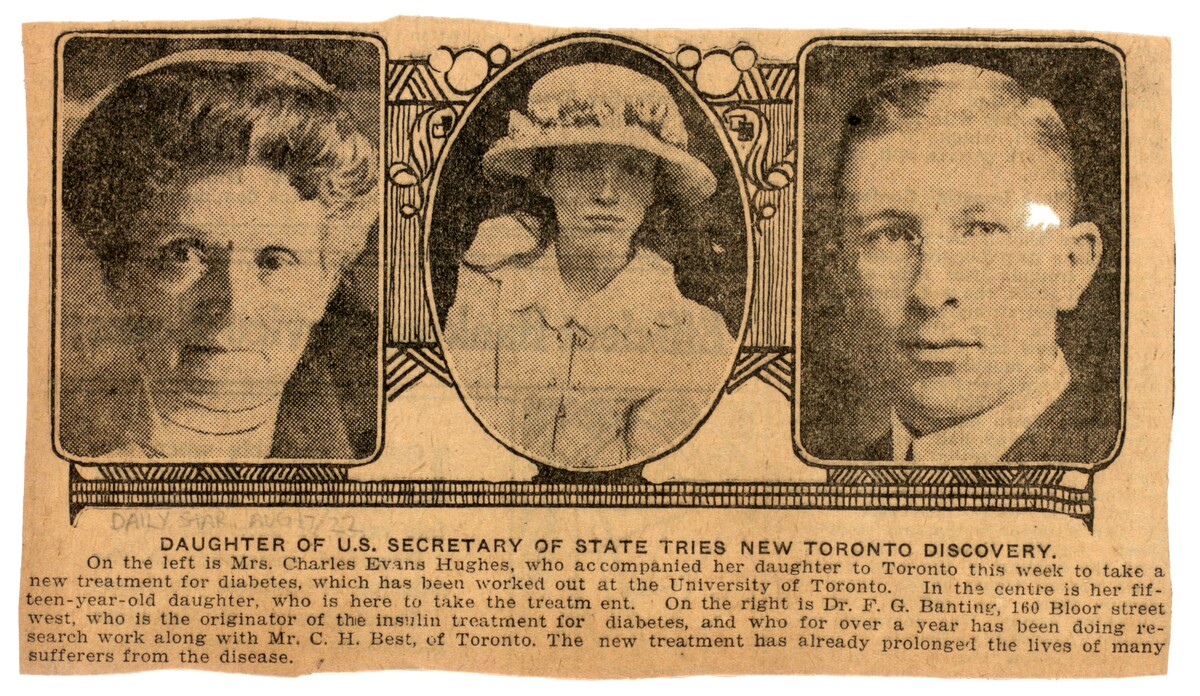 Antoinette C. Hughes, Washington, D.C. Letter to F.G. Banting, July 3, 1922.
Mrs. Hughes wrote to Banting to ask him to treat fourteen year old Elizabeth, who had suffered from diabetes for the past three years.

"She is pitifully depleted and reduced. She is five feet tall and weighs less than fifty pounds ... She is a model patient having never once in these three years, gone over her diet ... we feel that this strength of character – which her nurse considers quite unusual – is, of course, much in her favor."

Banting refused Mrs. Hughes initially, citing the shortage of insulin, but by August agreed to treat Elizabeth in Toronto. She would become one of his greatest success stories.

She was treated initially by Dr. Frederick M. Allen at his special clinic, the Physiatric Institute in Morristown, N.J. Dr. Allen put Elizabeth on a strict diet and continued to monitor her condition over the next three years while she lived at home with a private nurse. 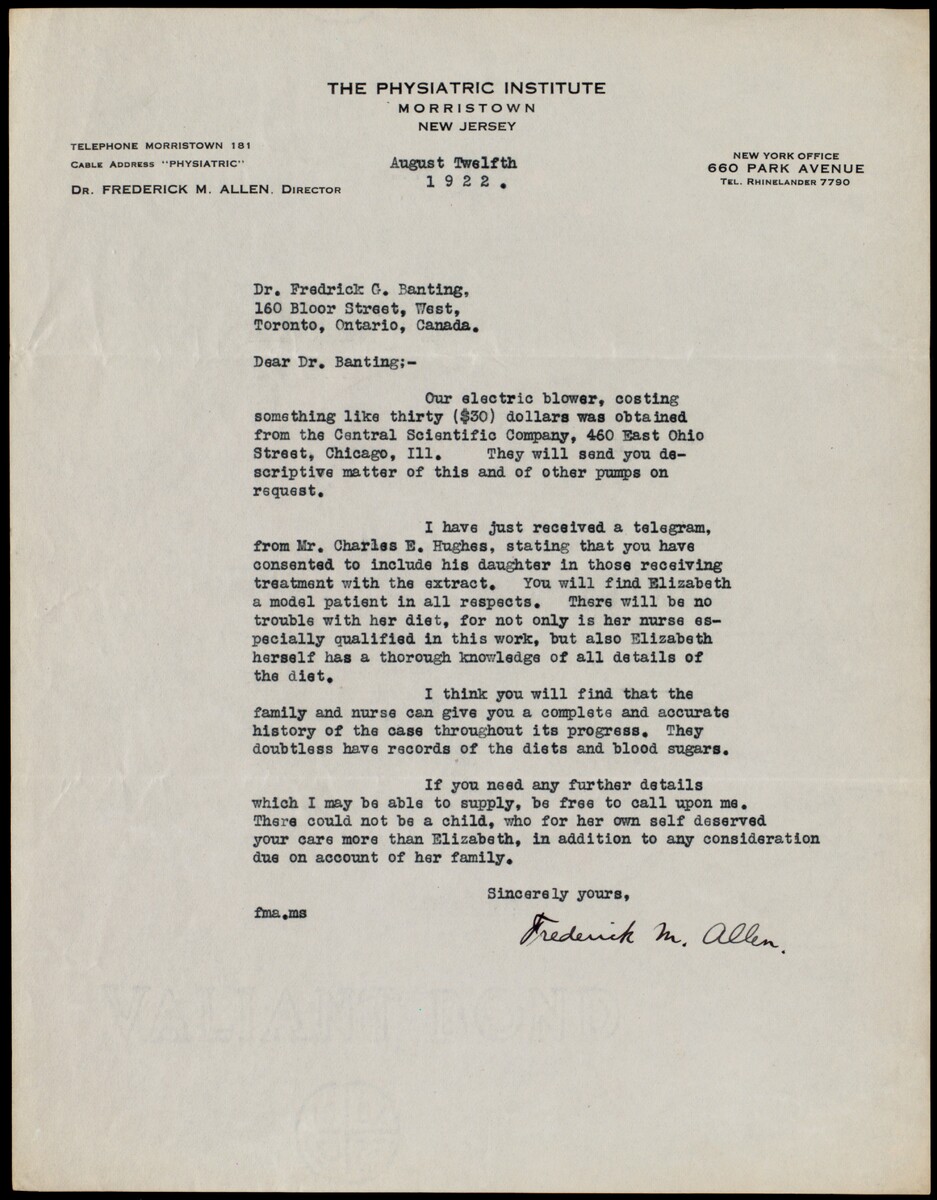 "You will find Elizabeth a model patient in all respects ... There could not be a child, who for her own self deserved your care more than Elizabeth ..." 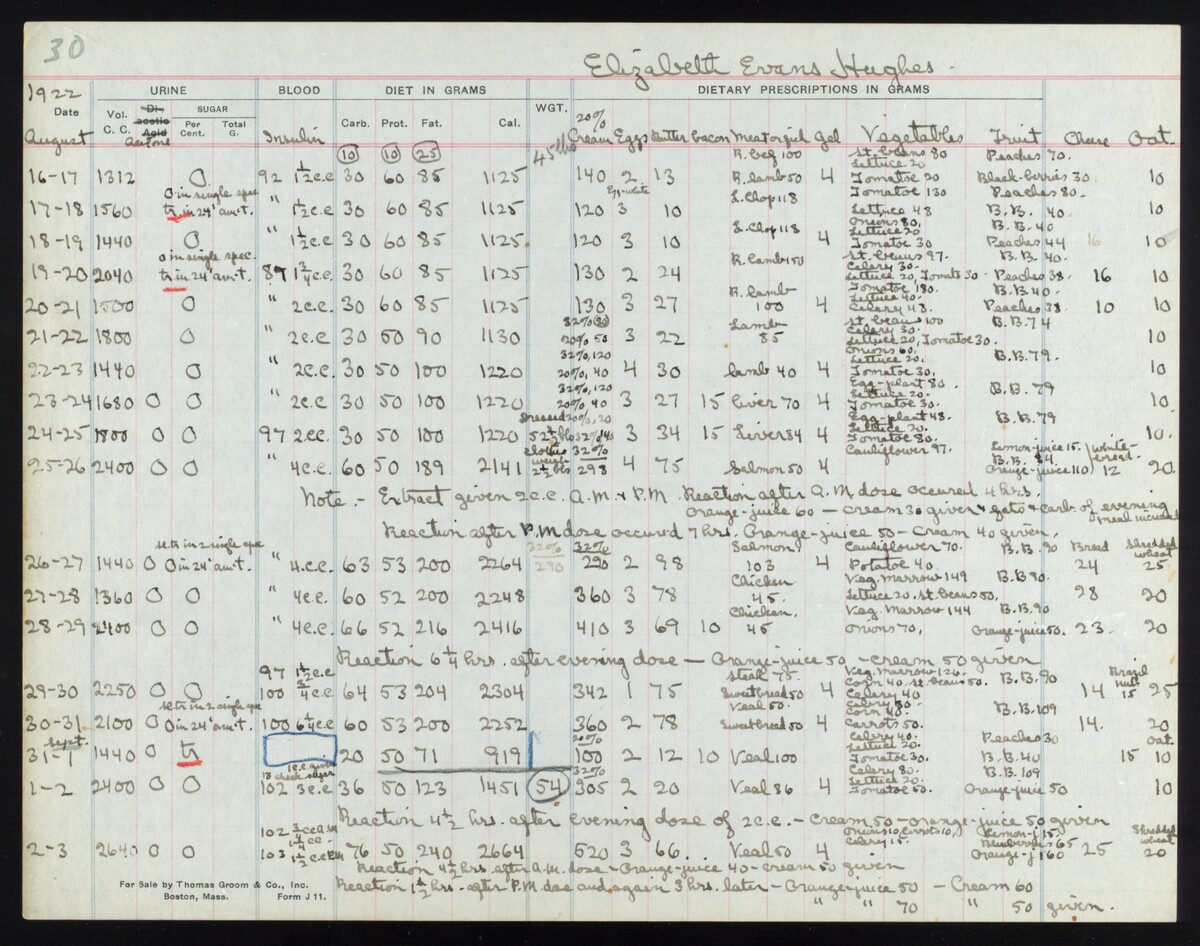 These entries record Elizabeth's treatment, medical condition and diet from August 16/17, when she received her first injection of insulin, to her departure from Toronto on November 30. During that time her weight increased from 45 to 79 pounds and her average calorie intake went from 1125 to 2512.

The entries are in Elizabeth Hughes's own hand. She had been keeping charts like these since she was first diagnosed in 1919, and continued her meticulous record-keeping over the next two years, regularly forwarding the charts to Banting with her letters describing her progress. 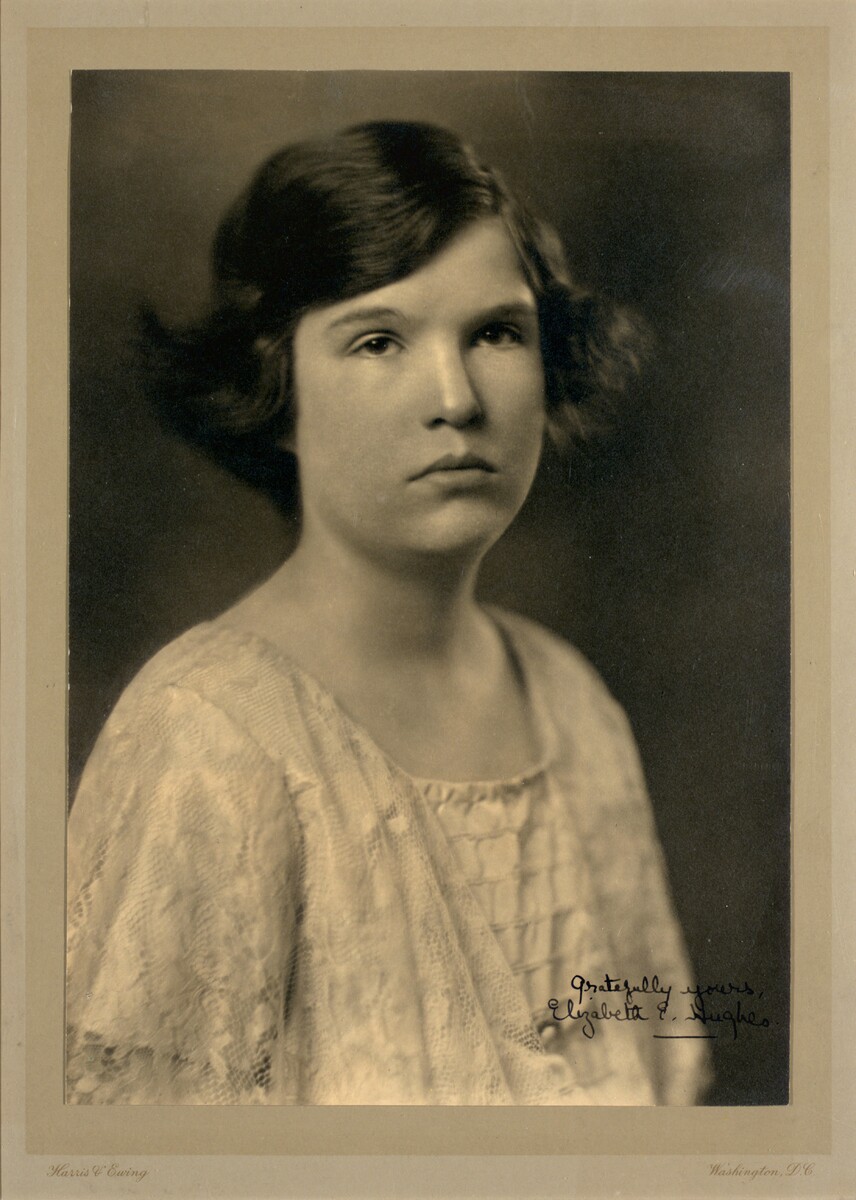 "I weigh 84 3/4 pounds now ... I ride horseback for an hour three times a week and am thinking of swimming in our fine Y.W.C.A. pool here the other three days. I am beginning to take two courses at school on Jan. 9th and I am eagerly looking forward to it."

"As for myself I am so well that I am afraid I have nothing much to report ... This year I am continuing my course at Barnard College and I am working full time in the hopes of receiving a degree in a couple of years. I am up at College from nine in the morning to six at night and lead as normal of a life as any girl up there." 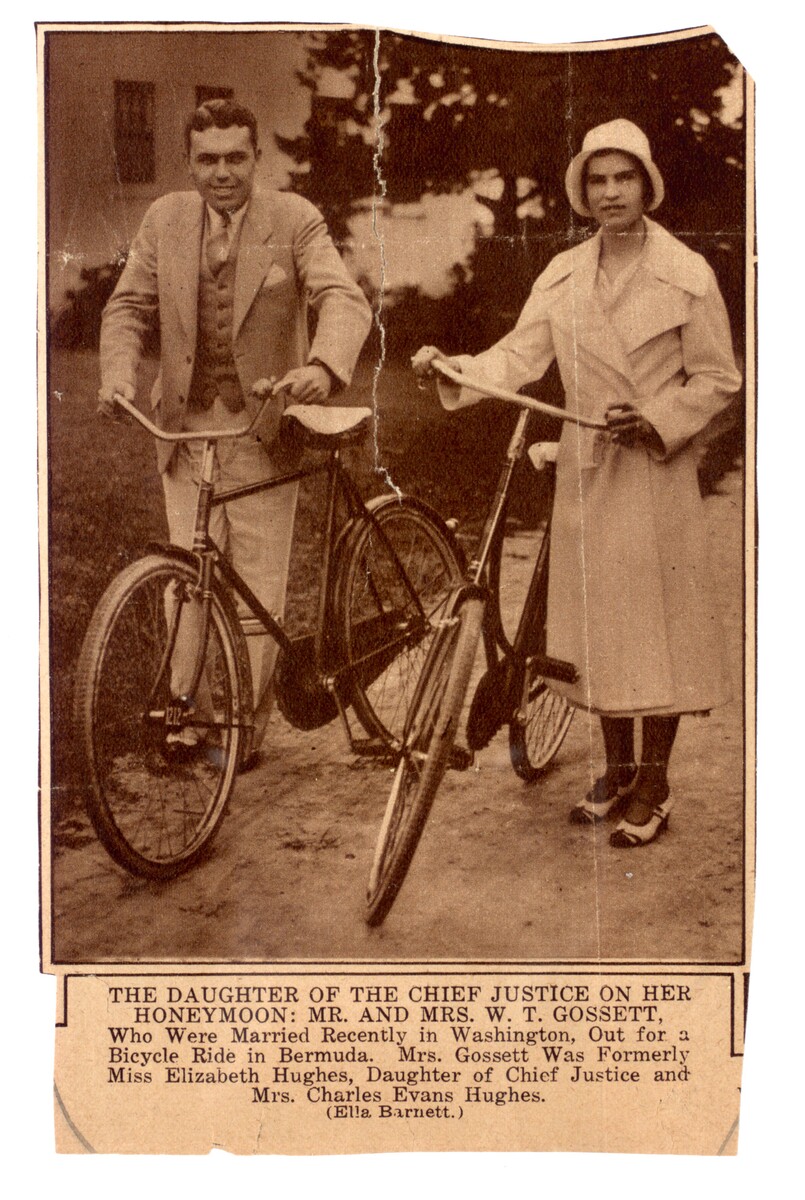 Newspaper clipping from F.G. Banting's Scrapbook: "Daughter of the Chief Justice, on her Honeymoon: Mr. and Mrs. W.T. Gossett Who Were Married Recently in Washington, Out for a Bicycle Ride in Bermuda" [1930]

Elizabeth Hughes graduated from Barnard College in 1929 and in 1930 married William T. Gossett, a young lawyer in her father's law firm. They had three children.

In later years Elizabeth became a Trustee of Barnard College, and a founding Trustee of Oakland University in Rochester. In 1972 she founded the Supreme Court Historical Society and served as its President for many years. None of her friends or associates ever knew that she suffered from diabetes.

Hughes lived until she was seventy-three and had lived for fifty-eight years on insulin. 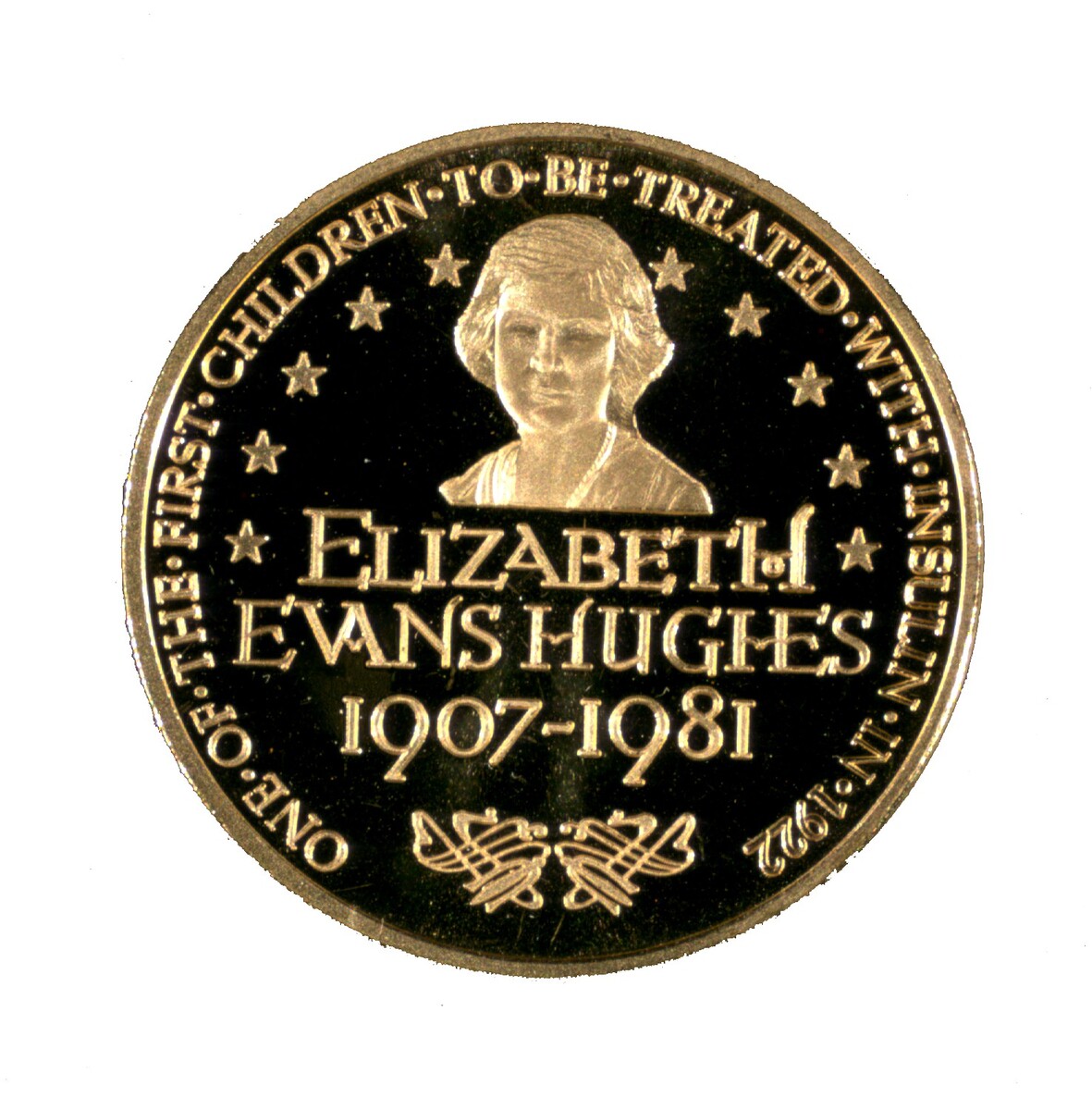 In 1995 the Eli Lilly Company commissioned a number of Welsh Insulin Medals to honour Welsh diabetics who had lived with the aid of insulin for fifty years or more. The medal honours Elizabeth Evans Hughes as "one of the first children to be treated with insulin in 1922" and commemorates her Welsh background. Elizabeth's Welsh middle name, "Evans," was a family name she herself used in her signature and on her stationery.