The Manufacture of Insulin

Once the clinical trials began and it was proven that the discovery had therapeutic benefit for human diabetic patients, the plan was to manufacture insulin in large quantities.

The Connaught Anti-Toxin Laboratories was set to finance and administer production, with J.B. Collip in charge of directing insulin manufacture. This process came to a halt when Collip found that he could not produce insulin in large batches using the method he had previously developed. The result of this failure to produce the extract led to an "insulin famine" in Toronto during the spring of 1922, forcing the team to rediscover the process of making insulin. In doing this, they realized that there needed to be some fundamental changes in the policy regarding the handling and development of the discovery.

In 1922 the members of the research group wrote to President Falconer to propose taking out a patent on the process for making pancreatic extract under the names of Best and Collip, "the two lay members who have been mainly responsible for the detailed work on the preparation." The patent would then be turned over to the University of Toronto. Such an action would safeguard the preparation process from any attempt to patent it for private gain.

"The patent would not be used for any other purpose than to prevent the taking out of a patent by other persons. When the details of the method of preparation are published anyone would be free to prepare the extract, but no one could secure a profitable monopoly." (Banting, Best, Collip, Macleod, and Fitzgerald to Falconer, April 12, 1922).

F.G. Banting, C.H. Best, and J.B. Collip. Assignment of the patent for the preparation of the extract to the University of Toronto's Board of Governors for the sum of one dollar. January 1, 1923. 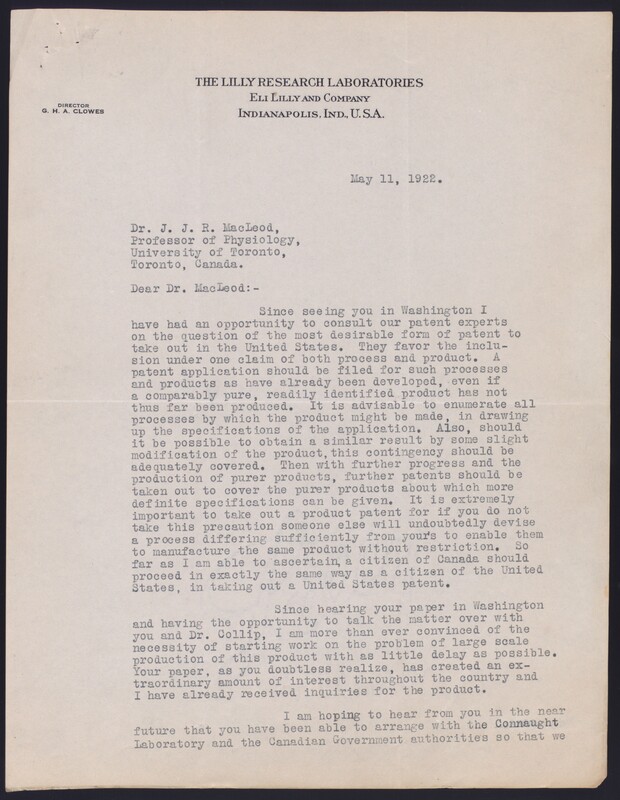 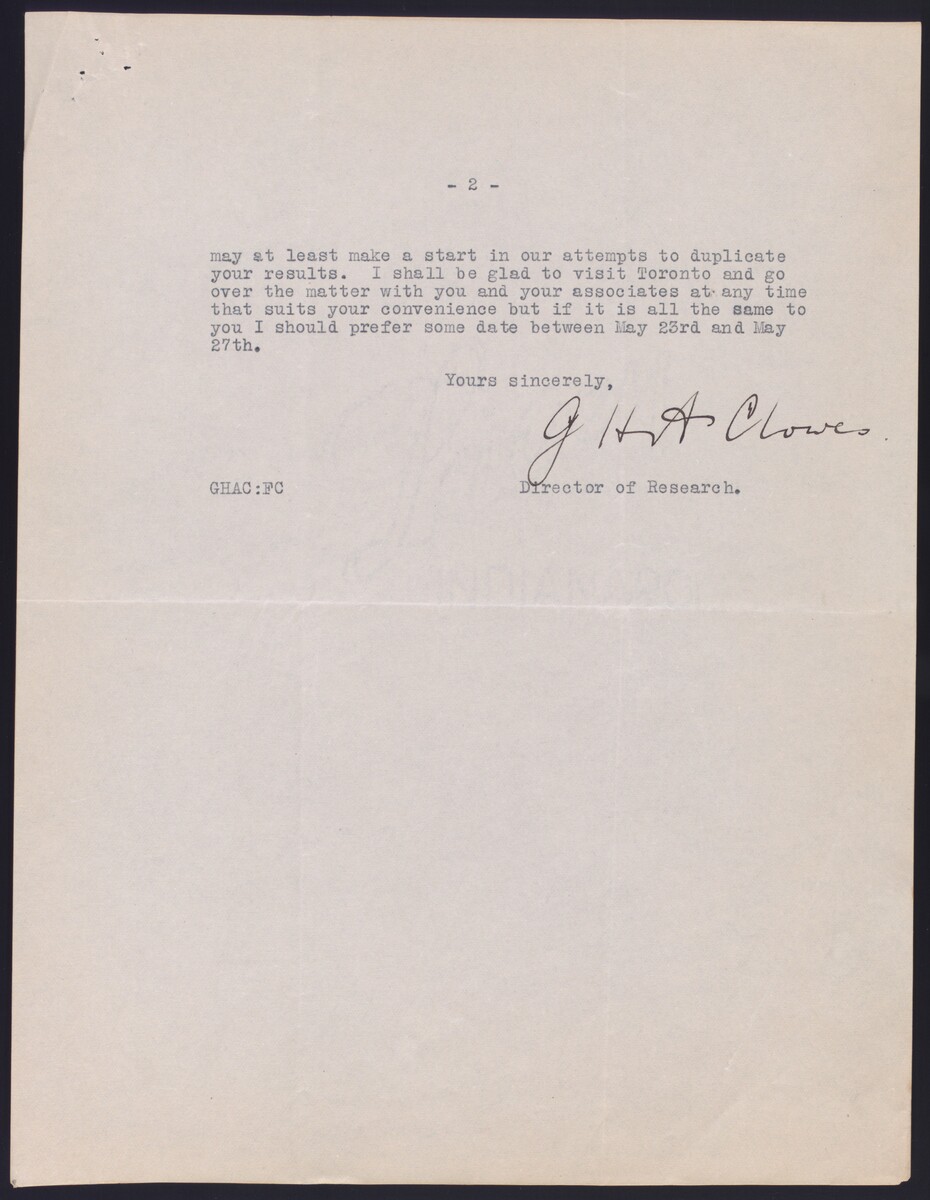 The group felt the mounting pressure to produce more insulin. Eli Lilly and Company was the first pharmaceutical firm to offer assistance to develop the extract. George H.A. Clowes, as Research Director at the Eli Lilly Company's Research Laboratories, proposed a collaboration between the Lilly and Connaught Laboratories in developing a method for large scale production:

"Since hearing your paper in Washington ... I am more than ever convinced of the necessity of starting work on the problem of large scale production of this product with as little delay as possible. Your paper ... has created an extraordinary amount of interest throughout the country and I have already received inquiries for the product."

Clowes had approached Macleod with an offer of collaboration shortly after hearing him speak at the December meeting of the American Physiological Society. At that time Macleod had refused the offer as premature. This time he felt it would be wise to accept. 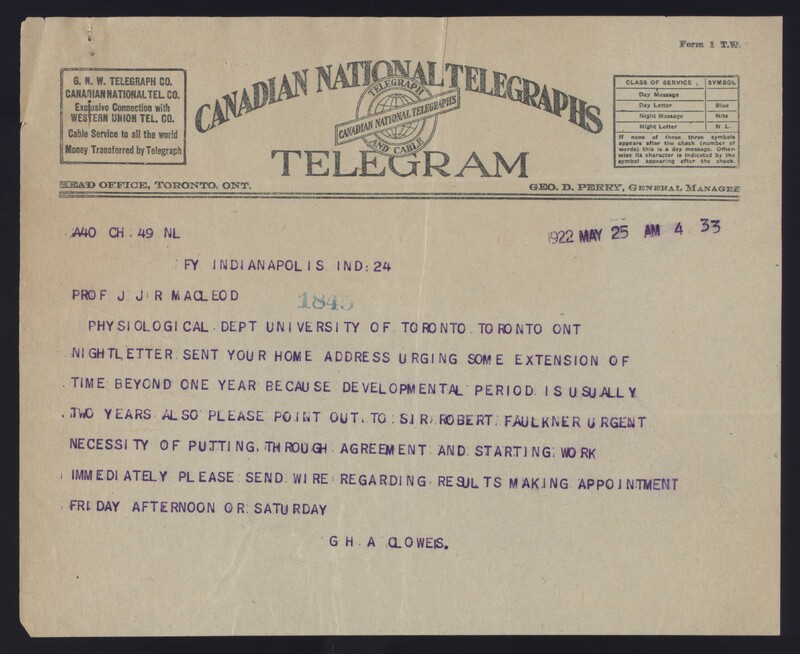 This is the original Canadian National Telegraph and Cable telegram in which Clowes asks Macleod to urge President Falconer to extend the agreement between Eli Lilly & Co. and the University of Toronto beyond one year. He stresses the urgency to begin work immediately.

Copy of Indenture between the Governors of the University of Toronto and the Eli Lilly Company of Indianapolis, May 20, 1922.

This document gave the Eli Lilly Company exclusive rights to the manufacture of insulin for the United States and Central and South America. The Connaught and Lilly Laboratories promised to share their knowledge and work together on the production problems. 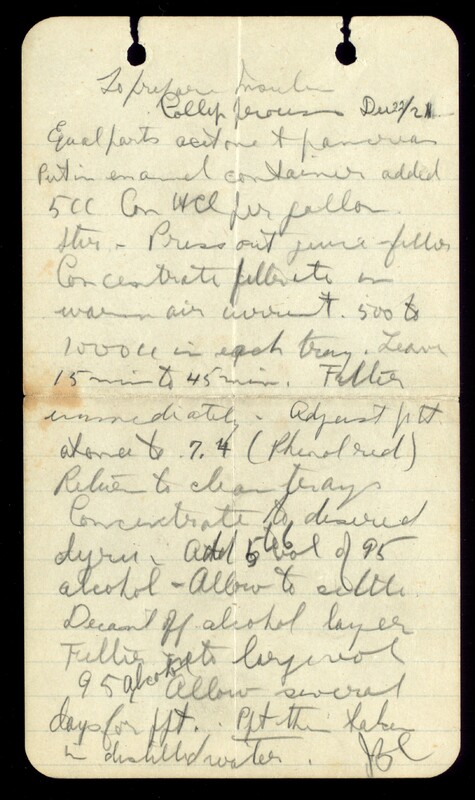 This note captures some of the urgency and excitement of the research carried out at this time. Aside from this jotted down procedure, no other laboratory notes by Collip relating to this Toronto research have survived.

The date appears to have been added later, but although it is in Collip's hand, it cannot be correct as the extract was not referred to as insulin in December 1921. The note was probably written in the spring of 1922, when Collip made a trip to the Lilly Laboratories in Indianapolis. A note on the back refers to Eli Lilly Co. paying travelling expenses. 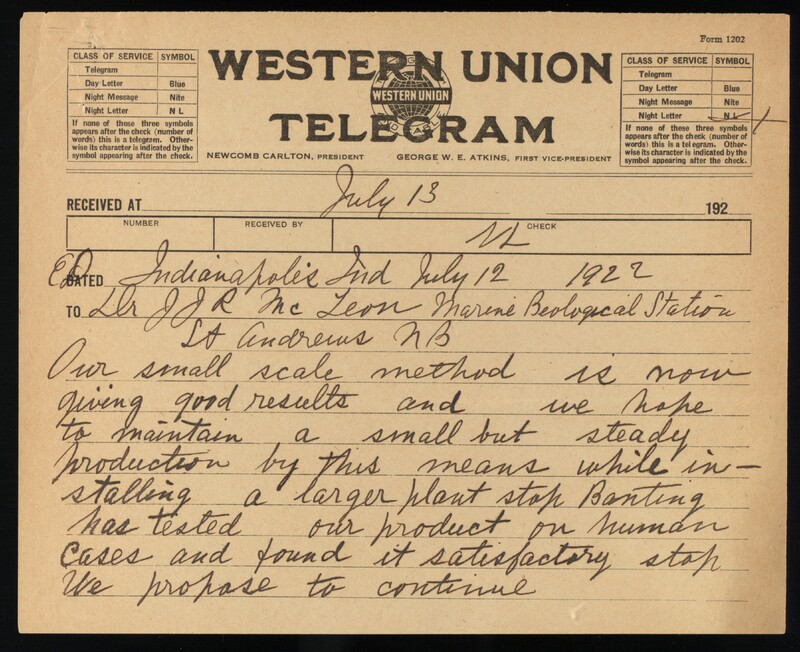 Dr. Clowes reports on the success and progress of Eli Lilly & Company's first attempts to manufacture insulin. He discusses distribution for clinical testing:

"Our small scale method is now giving good results and we hope to maintain a small but steady production by this means while installing a larger plant. Banting has tested our product on human cases and found it satisfactory..." 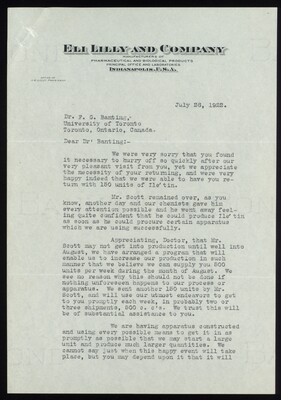 J.K. Lilly, the President of Eli Lilly Company at the time, assured Banting that he could count on receiving 500 units of "Ile'tin" from the Lilly Laboratories every week from now on.

A few days earlier, Banting and D.A. Scott, from Connaught, had visited the Lilly Laboratories to see the operation and to beg some additional extract for Banting's own patients in Toronto. The Connaught Laboratories had not been able to produce satisfactory extract in sufficient quantities to meet his needs. J.K. Lilly had been able to arrange for Banting to take back to Toronto an additional 150 cc. 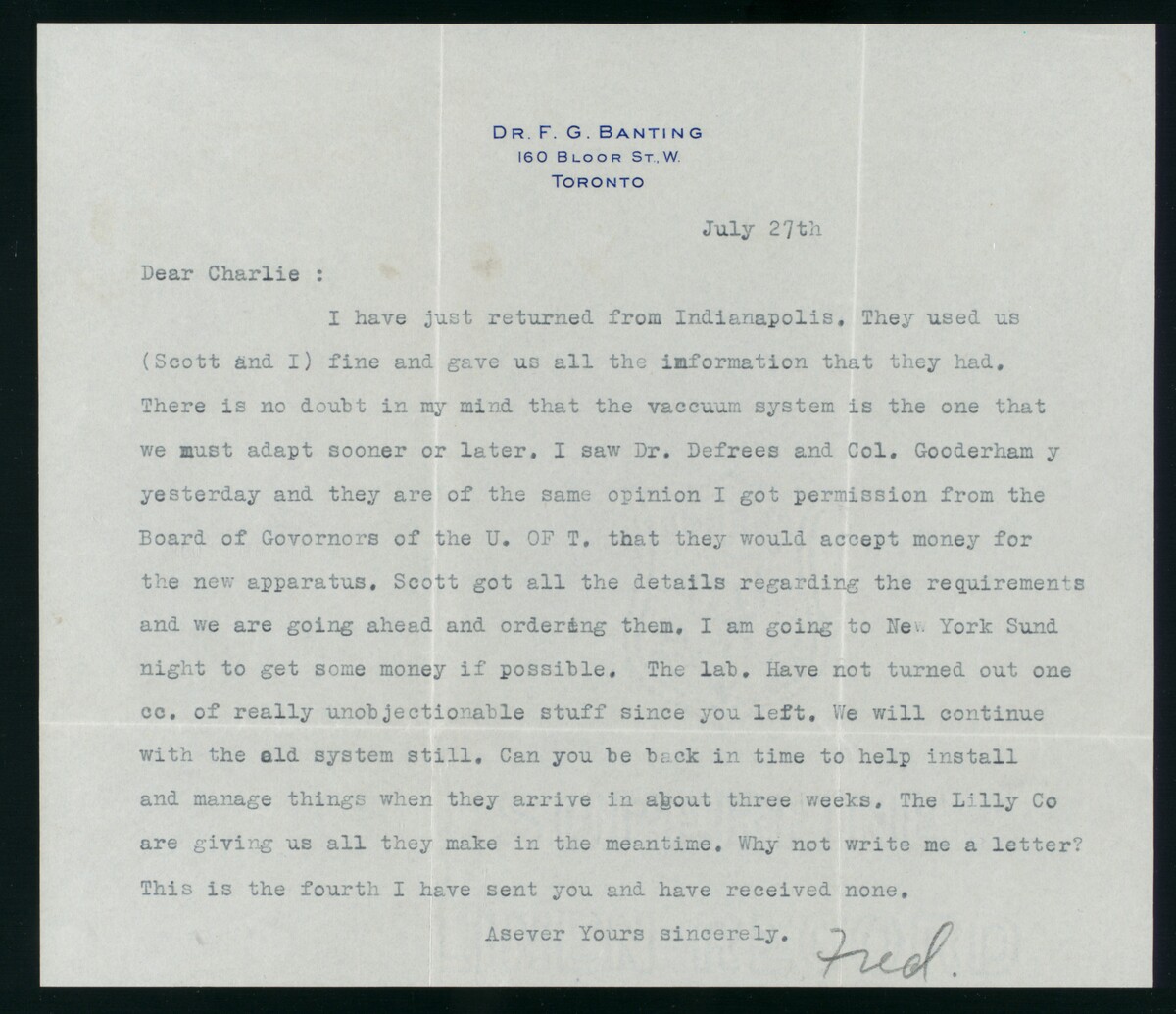 Banting writes that he had seen a vacuum still in operation at the Lilly Laboratories and realized that similar equipment would enable Connaught to improve the quality of its insulin. He hopes to raise the money to purchase the equipment himself.

"There is no doubt in my mind that the vacuum system is the one we must adopt sooner or later ... I am going to New York Sund [sic] night to get some money if possible. The lab. have not turned out one cc. of really unobjectionable stuff since you left."

These are the minutes for one of the early meetings of an Advisory Committee which had been set up to handle the distribution of insulin for the University. The Committee was chaired by Colonel Albert Gooderham. Banting, Best, Macleod, and R.D. Defries (Acting Director of the Connaught Laboratories) were all members.

The minutes record the transfer to the Connaught Laboratories of the recently received donation of $10,000 "in accordance with the wishes of the donor." The minutes also include a reference to the establishment of a new diabetic clinic at the Toronto General Hospital.

← Elsie Needham
The Manufacture of Insulin