Captured and Captive: A Prisoner of War 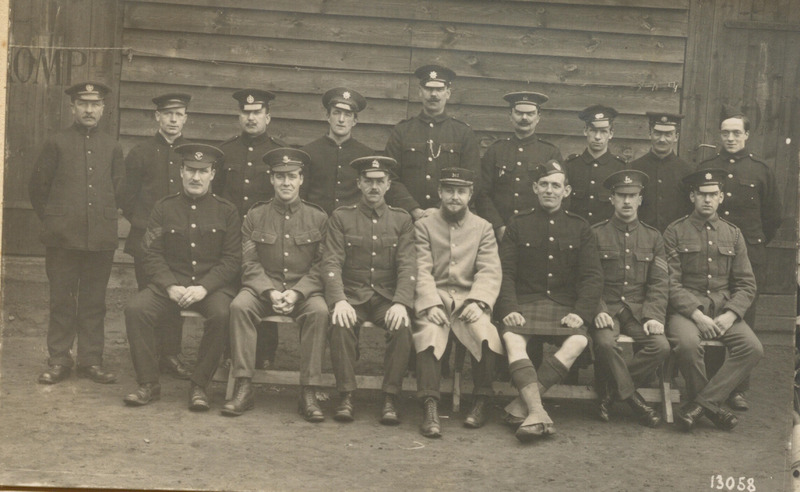 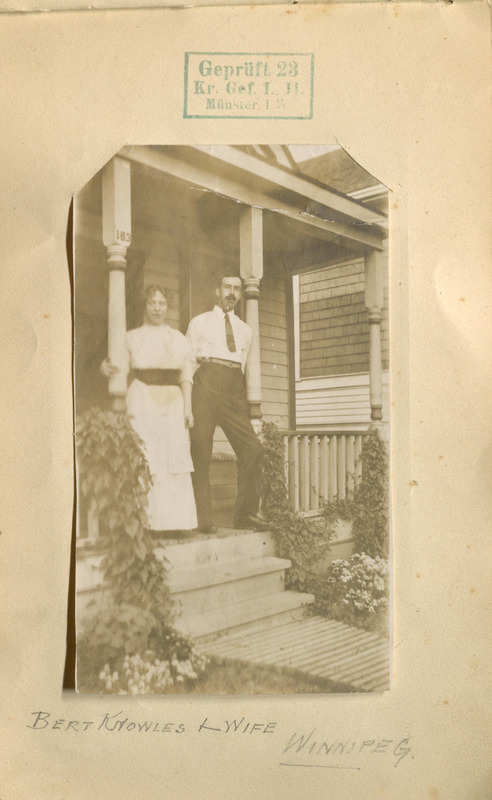 Photograph of Bert Knowles and wife in Winnipeg, [191-]

In 1910, Charles Albert Bovill (1863-1920) came to Canada for a new life. A widower, with adult daughters who remained in England, he settled in Winnipeg, Manitoba. Once there he continued the work he had done most of his life, as a travelling salesman, selling goods door-to-door.

When war was declared in Canada on 4 August 1914, Bovill attested that very day - he was given the regimental number of 609. On his attestation form, he quickly told them about his previous reserve military experience back in England, he'd spent 4 1/2 years with the 90th Rifles and 10 years with the Royal Rifles Brigade. He listed his date of birth as 18 August 1871 - presenting himself as a spry 43-year-old. In fact, his birthday was the 7 August 1863 and when sailed to England on 14 October 1914 with the first contingent of the Canadian Expeditionary Force he was 51 years old. Given the rank of Sergeant, he was assigned to the 90th Winnipeg Rifles, he trained at Salisbury Plain in the winter of 1914 and 1915, before landing in France on 12 February 1915.  He would spend a busy two months and 11 days at the front, seeing action at the Second Battle of Ypres, marked as the first large-scale use of poison gas by Germans during the war. Bovill was gassed, but would tell doctors after the war, that he "only coughed for two or three weeks after." On 25 April 1915 - three days after the start of the battle - Bovill was taken prisoner with at least one member of his regiment, Bert Knowles. They were taken to Gütersloh prisoner camp near Münster, Germany. 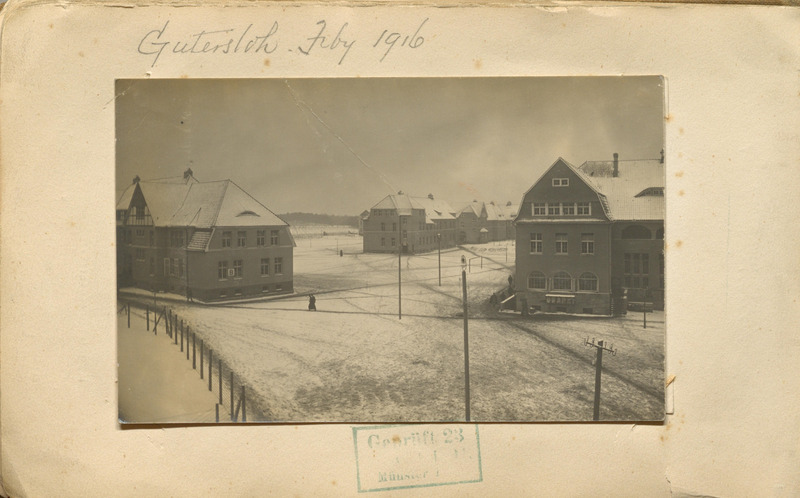 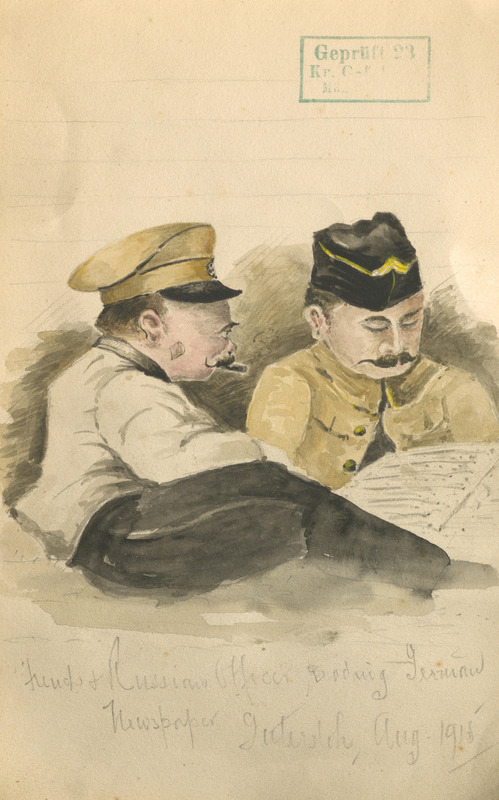 Once there, Bovill obtained a small German sketchbook - "Skizzenbuch"  - with every single page stamped "Geprüft 23. Kr. Gf. L. II Münster" (examined 23. Prisoner of War Camp II, Münster). As a young man, Bovill had trained as an architectural artist and put his skills to work capturing his fellow prisoners in pencil and watercolour. Bovill's portraits demonstrate the diversity of the camp, capturing Belgian, Russian and French soldiers. Bovill familiar with talking to all types after a lifetime of selling door-to-door seemed to be friendly with everyone. In addition to his drawings, his sketchbook became a scrapbook of his time as a POW, with pasted in programmes and photographs of social events (including photographs from a prisoner production of As You Like It), photographs of the camp and his co-workers in the kitchen and individual photographs of special friends often annotated with additional information. Under the photograph of a Russian soldier, he wrote "spoke 4 languages, left gutersloh as an interpreter." Another photograph of a French soldier is labelled "my restaurant friend," while below the soldier has signed his name and provided his address in Paris, perhaps in the hope of post-war correspondence. 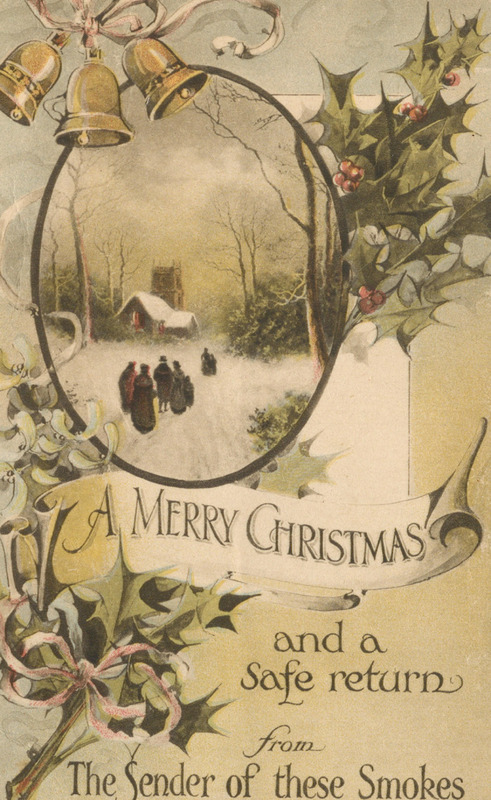 Christmas card received by Charles A. Bovill with cigarettes, [1916]

Bovill was registered as an official Prisoner of War in February 1916, which would allow him to receive and send mail to his loved ones. It also made him eligible for charity efforts, such as the Christmas Card, which arrived with cigarettes, that he pasted into his sketchbook in December 1916: "Merry Christmas and a Safe Return from the sender of these smokes." 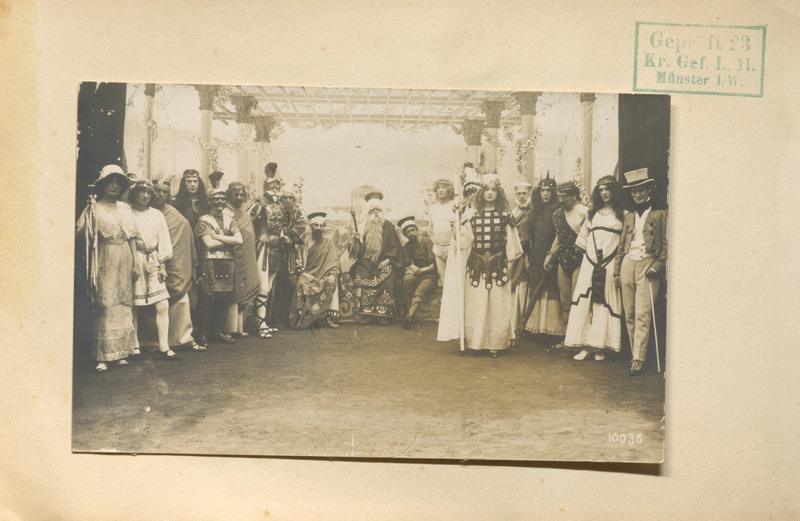 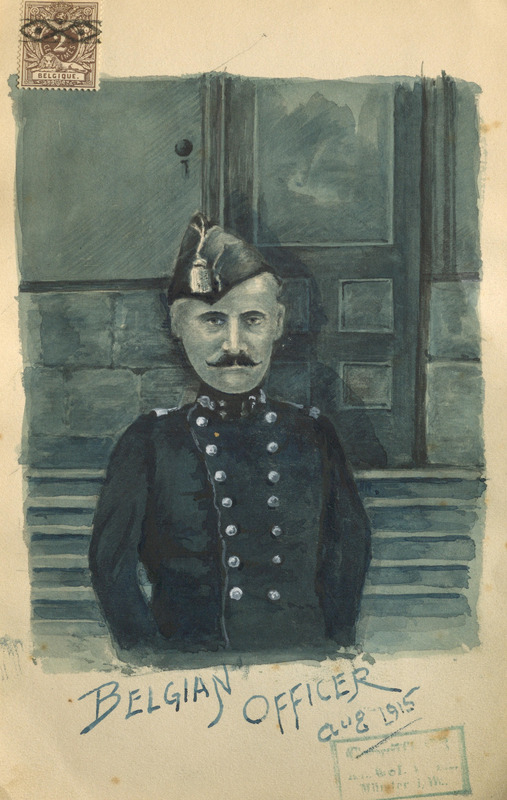 Watercolour drawing of a Belgian Officer by Charles Bovill, August 1915

Since Bovill was already over 50, it's not a surprise that he spent time with some of the older officers. The production of As You Like It was open only to "Belgian and British Officers," but it seemed that Bovill, an enlisted Canadian Sergeant, was in attendance as he included the programme as well as several photographs of the event in his sketchbook. 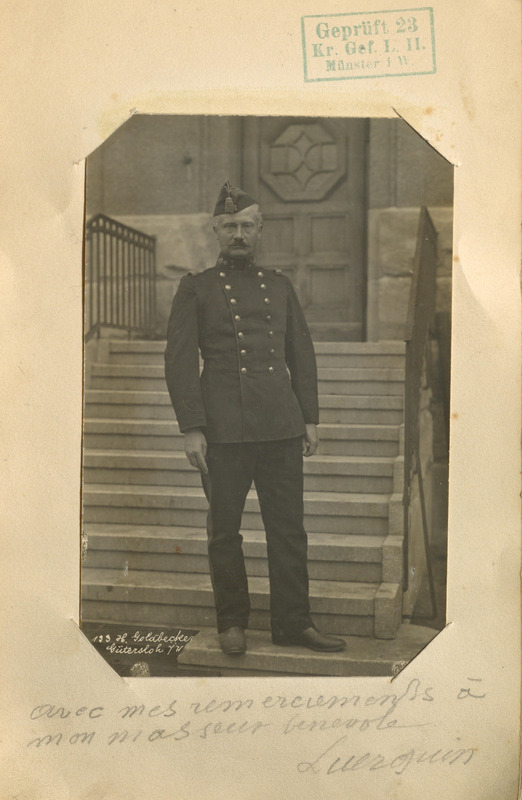 Photograph of Luerquin, a Belgian Officer, [1915]

His sketchbook reveals a particularly close relationship with a Belgian officer. Bovill made a watercolour drawing of the officer in August 1915, just a few months into his capture, and also kept a photograph of him. He had the Belgian Officer, who signed his name as "Luerquin," write a message below his photograph. He wrote in French, "Avec mes remerciemens a mon masseur benevole" (with thanks to my volunteer masseur). 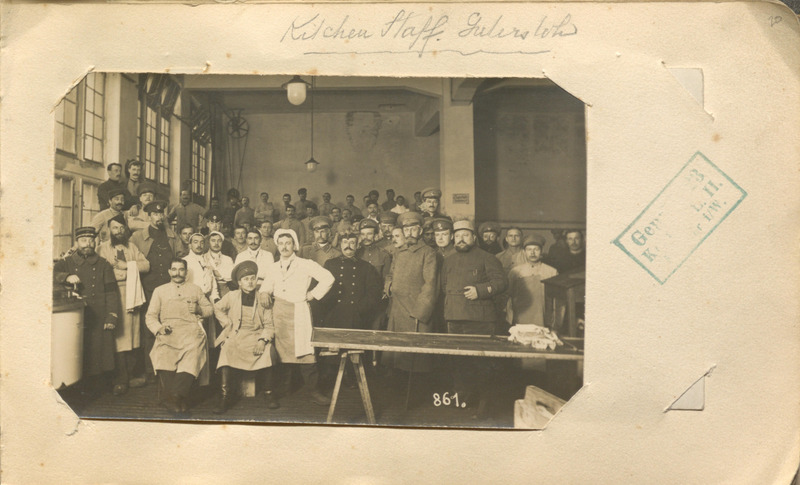 Photograph of the kitchen staff at Gütersloh, [1916] 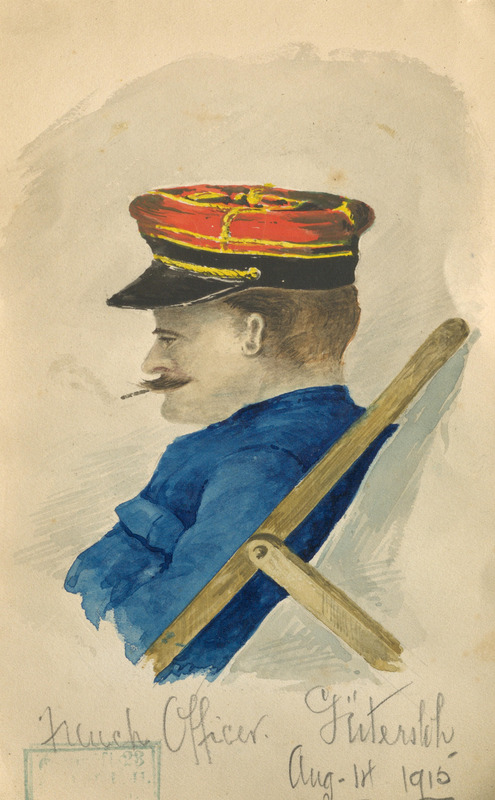 In late 1916 or early 1917, Bovill was transferred to Rennbahn camp, where he continued to document his experience before running out of pages in late 1917.

He was transferred to a camp in Holland on 28 March 1918, and remained there for seven months before he was liberated by British soldiers and brought back to England. He had been interred for over three and a half years. Once back in England, he was hospitalized with "gas poisoning," which was later diagnosed as tuberculosis. He was invalided back to Winnipeg in March 1919, and discharged as medically unfit in April 1919 at 54 years old. Upon return to Winnipeg, he was admitted to the Ninette Sanatorium for a period of six months. In December 1919, he would return to England to live with his daughter. He died in 1920 from the disease.

This sketchbook was acquired by the library in 1993.