R.G.E Leckie's Account of the Second Battle of Ypres 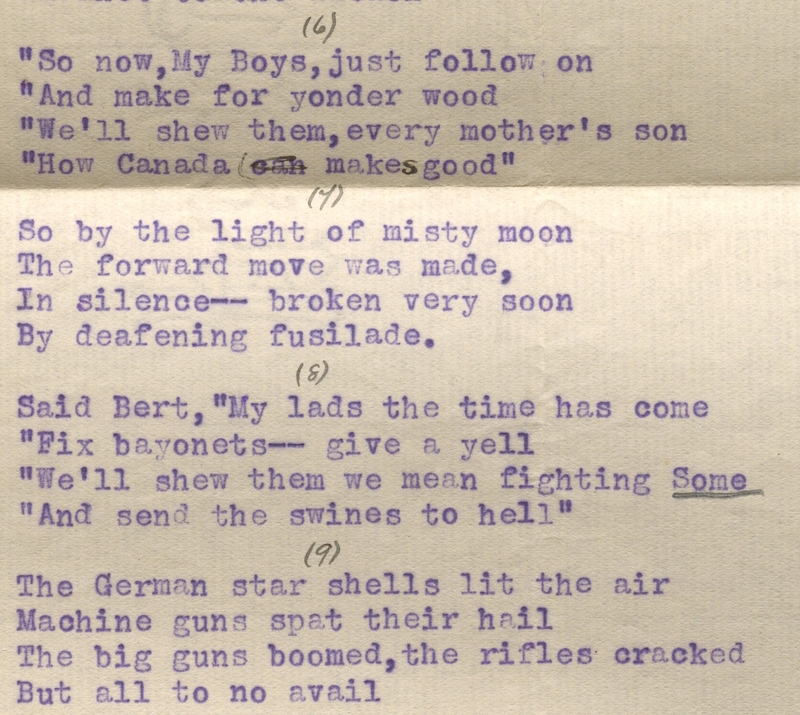 Selection from 18-verse poem about R.G.E Leckie and the 16th Battalion at the Second Battle of Ypres written by his brother-in-law, John Smythe Annesley, [1915-1916] 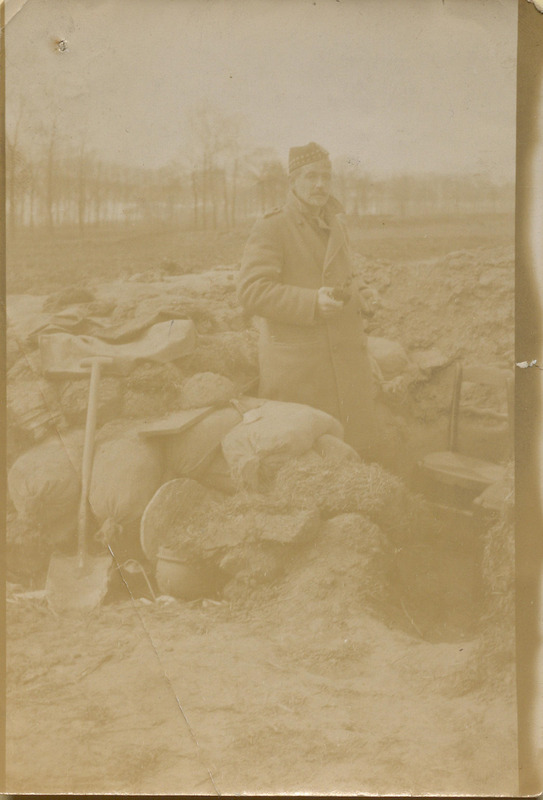 Robert Gilmour Edwards (R.G.E) Leckie (1869-1923) arrived in France on 1 April 1915 and two weeks later commanded the 16th Battalion (The Canadian Scottish) in the Second Battle of Ypres. On 18 February 1916, Robert was severely wounded with gunshot wounds in both thighs. His recovery was lengthy, and he was not able to return to the front. He took an acting position as Chief of General Staff for Canadians in England between April and December 1916, before assuming the role of General Officer Commanding of the 3rd Canadian Infantry Brigade on 16 December 1916 with the rank of Brigadier General. He would resign that position on 13 February 1917 when he was granted leave to British Columbia. He was retained for duty in Canada and commanded Military District No. 11 (Victoria, BC), overseeing recruitment and training, until the end of the war.

Leckie was in command of the 16th Battalion during the Second Battle of Ypres. His battalion fought in the Battle of St. Julien (24 April - 5 May 1915) and witnessed one of the earliest gas attacks in the war. Leckie sent a typed and very detailed account of the Battle to his family on 13 May 1915 with specific instructions that it was only for "family consumption."

Leckie's account vividly details the deadliness and destruction of the war and the effect it had on the soldiers and officers fighting in trenches.

To see another version of the Second Battle of Ypres written by an enlisted British soldier see H. Duffy's account in Wenonah Durant's Diary in the "Hospital" section.

The entirety of Leckie's account can be read below with a selection of excerpts written further down.

14 April 1915 -  Marched in a body to Wielje on Passchendaele Road. There we went to the Brigade Headquarters of the French who are holding the line in front of Podcapple, which we are to take over … We then went to trenches via St. Julien. … I passed all down the trenches in my Sub-Section, visiting every post.

15 April 1915 -  Went to bed at 7 am and slept until 10 am … Got orders to stand ready to move at moment’s notice as attack by Germans was expected. … Got message about 8 pm that Major Ross was wounded today in the trenches, shot through arm and in head – latter wound seems light.

22 April 1915 – Attended Rudolph’s funeral at 9am … in afternoon very heavy shelling of Ypres took place something terrible. Houses crumbled up with one shot. First shot smashed all the windows in my Headquarters. … Soldiers helped women and children. Many causalities. Ordered to hold ourselves in readiness to move at one – “Stand to Arms.” … French refugees came pouring across Bridges and French soldiers, principally Zouaves, in flight. Looked as if French had been routed. … Canadians still holding their line.  … Formed up in the moonlight about 1000 years from the enemy and close to St. Julien road. … Advance made about midnight. When about 300 years from the enemy he opened rapid fire with rifles and machine guns. It was a terrific fire and it is a wonder anyone got through. … I could scarcely realize we had captured the German trenches when I jumped over into them. Most of the Germans cleared when we started to yell and made for the woods. … I would not let any of the men deal harshly with the prisoners and tried to assure them they need to have no fear. Some seemed paralyzed with fright. … Sent for Jack to discuss situation. Many wounded and dead brought in and sent on to Brigade Headquarters.

23 April 1915 – No sleep all day except for short doze in cellar of farm. Whole place a shambles. Wounded and dead lying about everyplace. Horrid smell of blood. … station badly shelled during my absence, killed several wounded. High explosive. Terrible sight on my return.

24 April 1915 -  Shelled very heavily by cross-fire. Also under rifle fire. 2nd Battalion ordered to retire from trenches we had captured.

25 April 1915 -  I had several narrow escapes from bullets. High explosive shells drove out Brigade Staff and set fire to Brigade headquarters farm. 175,000 rounds of S.A Ammunition destroyed. The cartridges exploding were like heavy firing for an hour or two.

26 April 1915 – Slept in stable from 6:00 to 7:30. … Brigade about 1,300 strong, I am told. … Halted west of La Brique after crossing Yser canal and dug ourselves in. Watched French attack. Driven back by fumes. Advance again made which was successful.

27 April 1915 – Heavily shelled all day. Our trenches were surrounded by batteries so we got it hot and heavy from shrapnel and high explosives. Very trying day. Jack had cap knocked off by fragment of shell.

29 April 1915 – Stayed in trenches along west embankment all day. Got orders to move to reserve trenches on east side of Canal just opposite us … Don’t see why we don’t cross the bridge we are guarding!

30 April 1915 – Did not sleep well owing to cold. My feet had been wet. … Heavy shelling all day … Was hit on side by fragment of big shell – did not penetrate – it hit Corp. … Troops very tired and need reorganization. Very trying to keep us at this work so long action the action. New draft have not had sleep for four days. Noisiest battle we have had.

1 May 1915 – Sent telegram stating regiment not in proper condition to take the offensive. Promised to be relieved tonight. Relief not made. … All our lines heavily shelled. Played cards with Hastings for a while in my dugout.

2 May 1915 – No attack until 5:30 pm when dense yellow fumes were observed on our right. Germans made attack on our 12th Brigade. Many Essex Regiment overcome with gas – probably bromine fumes. … The wind was favourable for the gas attack, but a slight rain helped to precipitate the fumes.

3 May 1915 – Hear French lost line of trenches on our left during night. … no gas as wind is from south-east … Lent camera to Colonel Currie to take photo of shell in tree. Took some photos of our trenches.

4 May 1915 – General Plumer came with General Turner about 2:30 pm and thanked me for the way the Regiment behaved on the night of 22-23 April. He said their gallant action saved the position for the British. Canadians apparently in high favor just now.

5 May 1915 – General Alderson came in with Colonel Carson, Colonel Wood and staff while I was there. He got me to describe with map the charge we made. He said ours was the only successful counter-charge and did more than anything else to save the position. He congratulated the Regiment and me.

6 May 1915 – I rode up to Brigade Headquarters shortly afterwards. Colonel Watt there explaining best means to protect men against gas. We were sent Sodium Hyposulphine to put in masks.