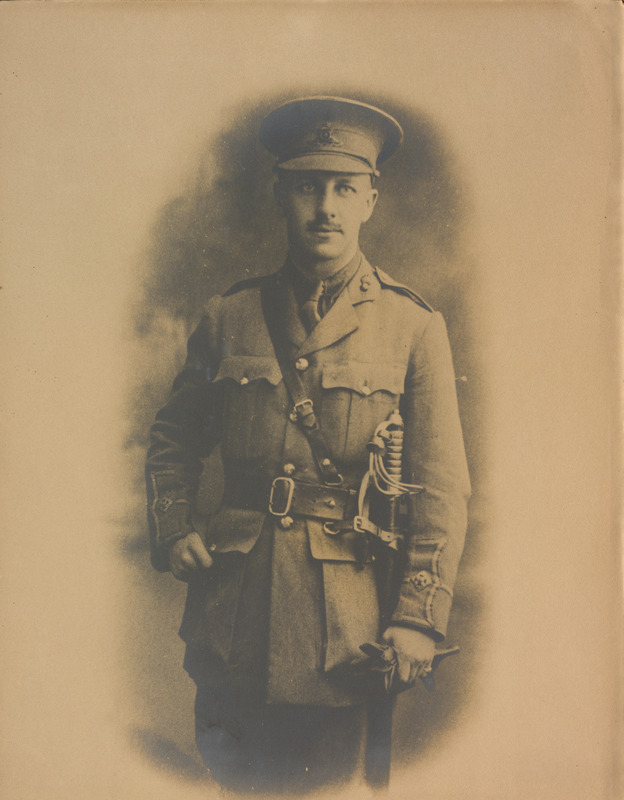 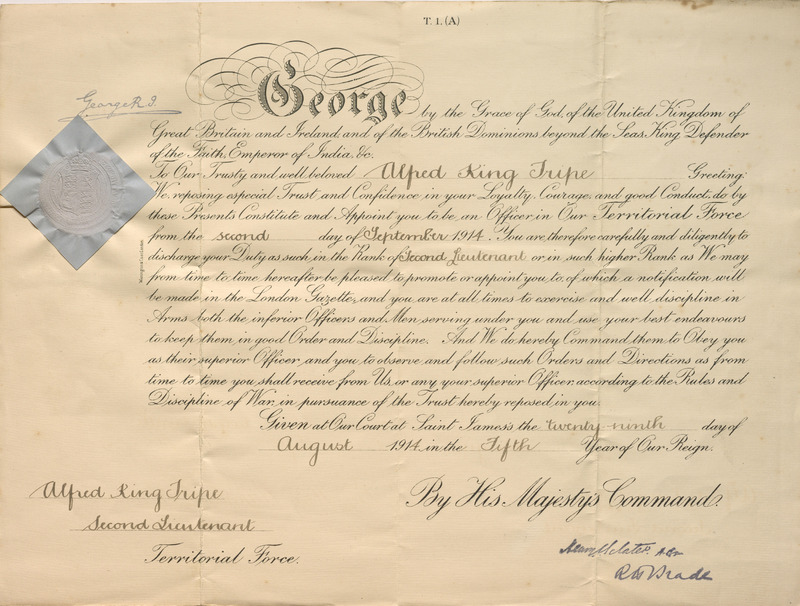 Alfred King Tripe (1887-1917), of Plymouth, Devon, joined the war effort almost immediately upon Britain's declaration of war on 4 August 1914. The 27-year-old received a commission as Second Lieutenant with the Territorial Force on 29 August 1914, signed by King George V, and was assigned to the Royal Garrison Artillery, Devonshire Regiment. He was promoted to Lieutenant on 15 March 1915. In November 1916, he joined the newly formed Royal Tank Corps and was assigned to "E" Battalion. Tanks were a new wartime invention that had first been used in the field at Courcelette in September 1916. After training, Lieutenant Tripe and "E" Battalion arrived in France on 26 June 1917. After undergoing final training in France, the Battalion was sent to the front and stationed at Oosthoek Wood in Flanders in July. Alfred Tripe was given command of Eclipse II, a Mk IV tank, with a crew of seven.

When Alfred King Tripe left for France, he brought along his billfold, in which he kept a lock of his mother's - Marian (Edwards) Tripe - hair. 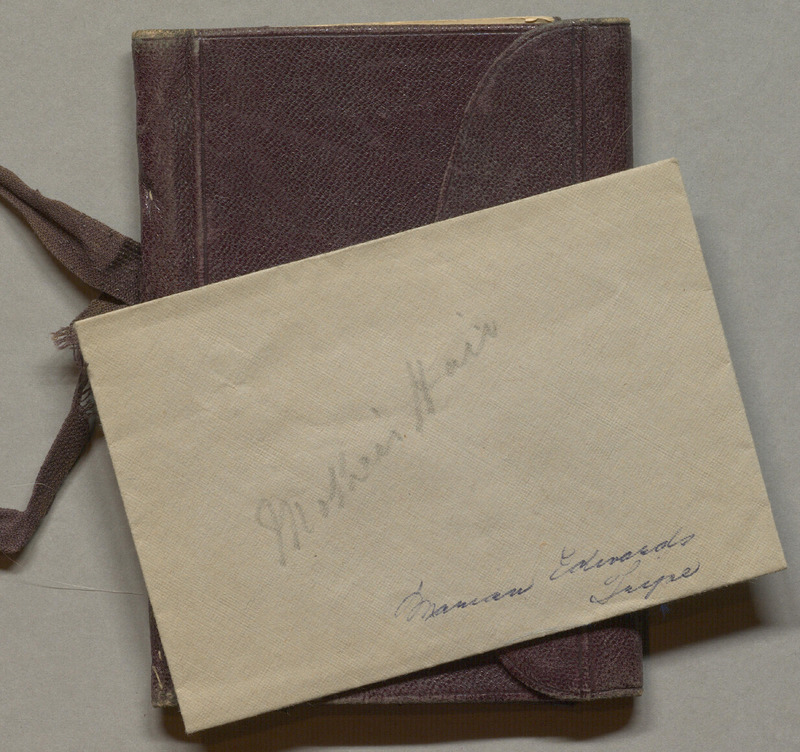 Alfred King Tripe's billfold with a clipping of "Mother's Hair" that he brought to the front, 1917 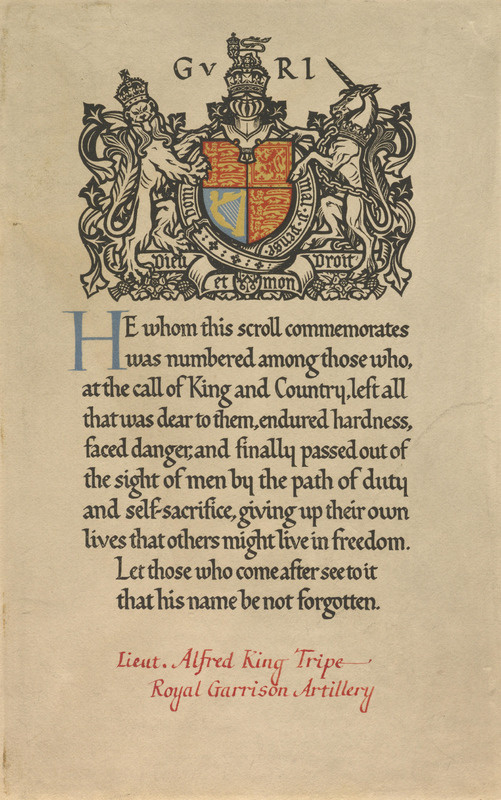 Alfred King Tripe died at the Battle of Cambrai on 23 November 1917. Beginning on 20 November 1917, this battle marked the first large-scale use of tanks in battle. Tripe's tank crew saw great action on the first two days of the offensive, but by the 23 November, Tripe's tank was one of only eleven tanks, out of the original forty-two that "E" Battalion had started with. At 11:45 am on the 23rd, a shell hit the Eclipse II wounding three of the seven crew, and killing three more along with Alfred Tripe who died instantly.

The commanding officers of Tripe's Battalion, his section and the Tank Corps all chose to write letters to Alfred's father, Walter Delamain Tripe. The war office copied the letters and sent them in one page to their home in Devon. The letters describe the event as well as the character of Alfred. His section commander would write, "I was with his tank during the first battle on the 20th, and could not have wished a finer example of coolness and courage. His crew and every Officer and man in the Battalion who knew him, loved him and respected him." 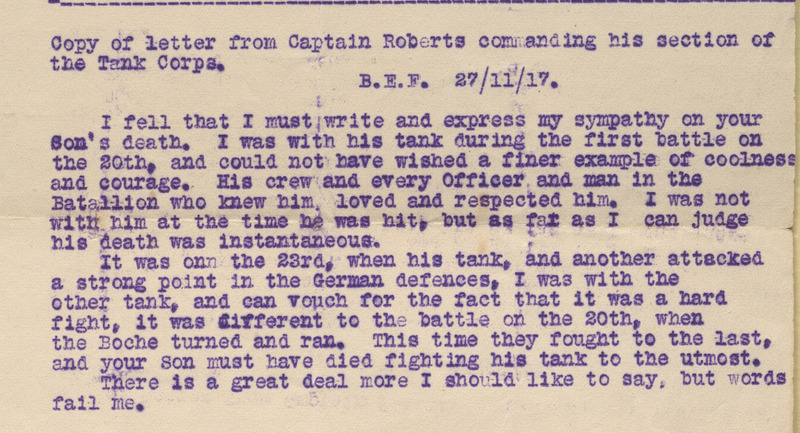 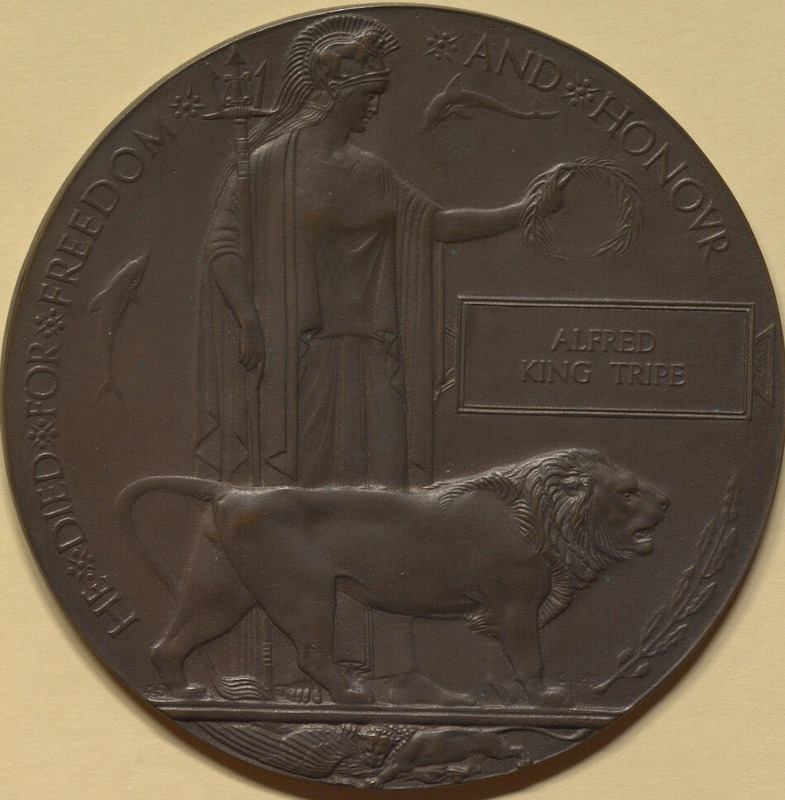 In 1920, Alfred King Tripe's parents were sent a commemorative scroll and plaque in honour of his sacrifice. The scroll honours those "who at the call of King and Country, left all that was dear to them, endured hardness, faced danger, and finally passed out of the sight of men by the path of duty and self-sacrifice giving up their own lives that others might live in freedom." The scroll was accompanied by a large bronze plaque, which due to its similarity to the one-pence coin, came to be known colloquially as the "dead man's penny."

Items relating to Alfred King Tripe were donated as a part of the Tripe Family Papers to the library in 2016.

← William Thomas Clements
After the War: Veterans and the Effects of Trauma →
I Regret to Inform You: Death at the Front
Alfred King Tripe