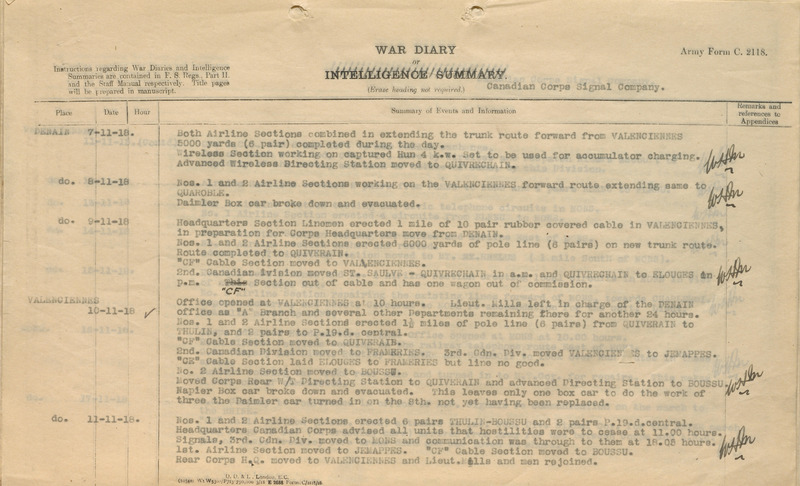 Canadian Corps Signal Company regimental diary for week of 7-11 November 1918. This entry makes a comment on the Armistice, "Headquarters Canadian Corps advised all units that hostilities were to cease at 11.00 hours" in the neutral manner common in Regimental diaries. 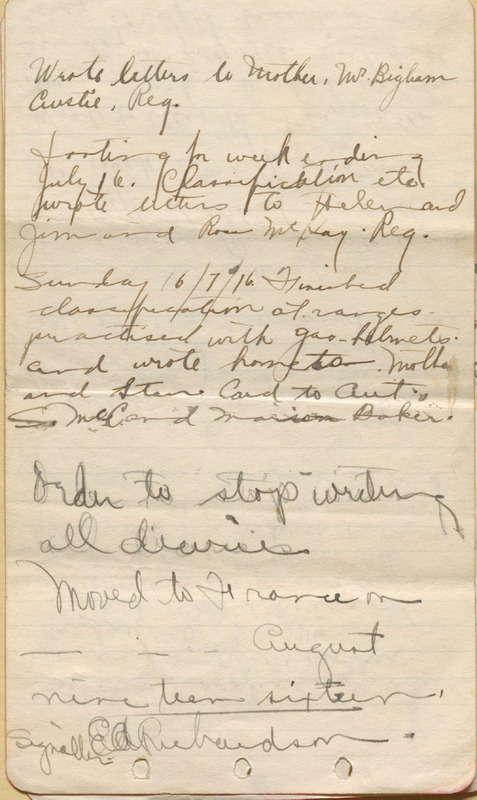 Ted Richardson's diary explains on the final page that he had been "ordered" to stop diary writing prior to going to France, August 1916.

During the First World War, Canadian soldiers were forbidden from keeping diaries that described specific information about war, due to the fear that their writing could fall into enemy hands. Ted Richardson, of Ingersoll, Ontario, discovered this when he was ordered to stop writing in his diary on the eve of his departure to France, "Ordered to stop all diaries. Moved to France on ---- August nineteen sixteen." Many others, like Ronald Hugh MacDonald, would continue to keep diaries despite the rules.

The exception were regimental war diaries - official logs kept by each regiment of their "Actions in the Field," which on any given day could include their location, the weather, and their tasks for the day.  Official regimental war diaries are held at Library and Archives Canada (LAC) in Ottawa, but the Fisher was lucky to obtain through donation a portion of the regimental war diary for the Canadian Corps Signal Company, which includes a typescript copy of the official version kept at LAC, as well as original handwritten entries, dating from 1917 to 1919. The Canadian Corps Signal Company's role was to set up and maintain communications between camps, headquarters, dressing stations and the front. Accordingly, the corps spent the majority of their time behind the front, such as in June 1917 when stationed at Camblain L'Abbé, a camp behind Vimy Ridge, when the writer reports, "cable sections training arranged to direct the CRH route near St. Eloy, where railway [cut] interferes with poles ... Finished work on CTH routes on railway between Camblain and Villers-au-Bois station." 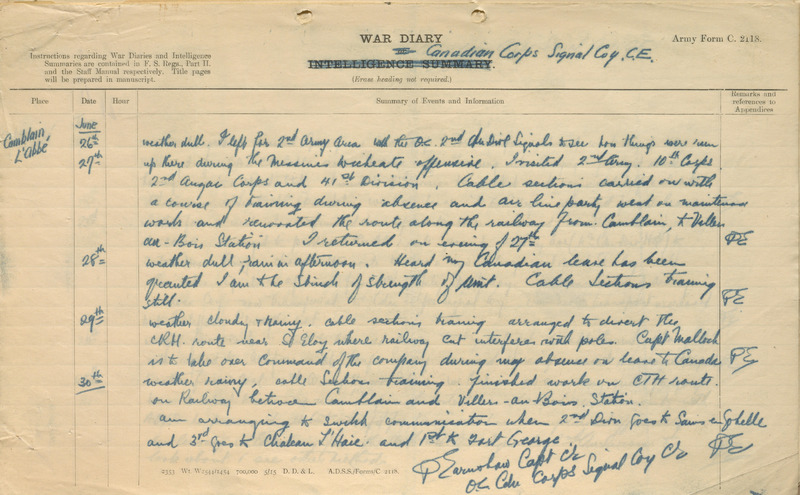 Citations and recommendations for gallantry are also present in this war diary. While the Signal Corps were not often involved directly with fighting, they played an important job in the war effort and their role was still dangerous. Three such recommendations are displayed here.

The description of Sapper Henry Telford Roy Mount's commendation, dated 12 November 1917, is both awe-inspiring and terrifying. It describes the soldier living in a pill-box, a concrete fortification, for three weeks "in full view of the enemy ... This test point was subjected to almost incessant shell fire during his tour of duty which often forced the occupants to wear their gas masks for hours at a time. In the face of every difficulty, this sapper showed wonderful courage, endurance and judgment ..." Sapper Mount, a twenty-one year old student from Toronto, would receive the Military Medal for this action in March 1918.

This diary and commendations were acquired by the library in 1983.

← Ronald Hugh Macdonald
On the Road and in the Hospitals: Ambulance Drivers and Nurses →
Life at War: Diaries
Canadian Corp Signal Company