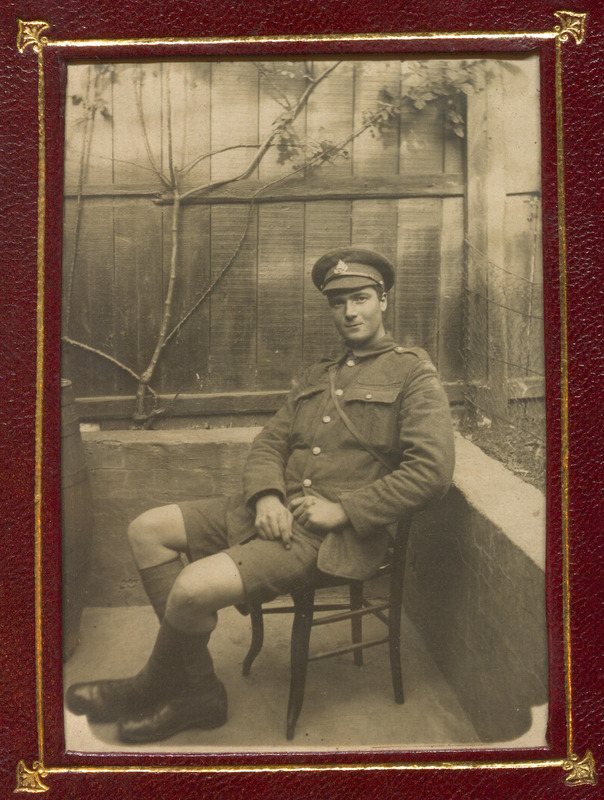 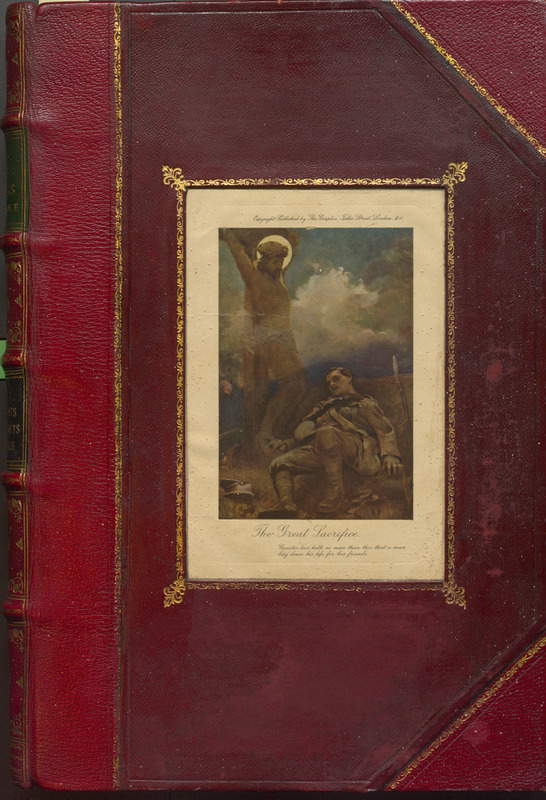 The manuscript book, Last Letters from France, may be one of the most heart-breaking items held in the Fisher's collection. The book showcases the life of William Thomas Clements (1899-1918), the beloved oldest child of William and Elizabeth Clements, who died in France on 3 September 1918, while serving with the 9th Battalion of the East Surrey Regiment, at the age of 19. The book, presumably put together by his parents, honours Clement's desired profession - he had apprenticed as a bookbinder before going to war, through the intricate gold-tooled red leather binding, with "Last Letters from France" written on the spine and inset photographs of the young man in the inside covers. 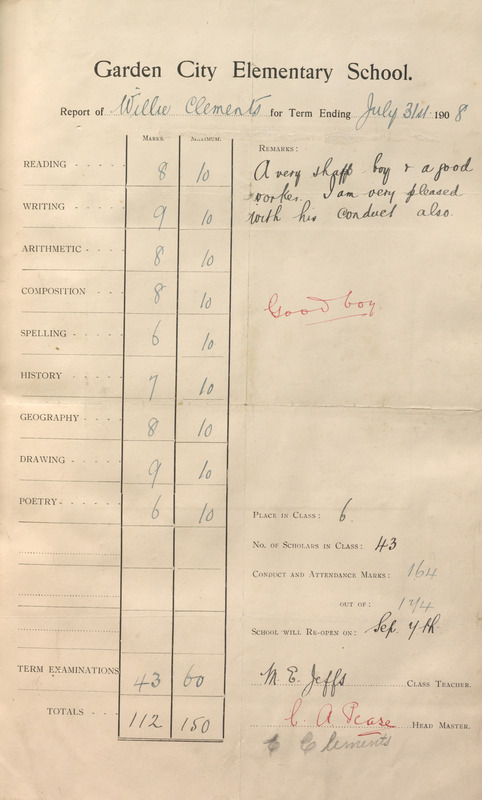 The book, 173 pages in length, begins with material from Clements' early life, including a school report card from 1908, which proclaims nine-year-old Willie as a "sharp boy and a good worker." His early adult-hood is marked with his apprenticeship paperwork and sundry receipts from the Central School of Arts and Crafts, where he trained in bookbinding techniques. His last letter as a civilian informs the bursar at his school that "I am not 18 until the 5th of March and intend attesting next week" and inquires about the status of his scholarship in the event that he is "accepted for service." 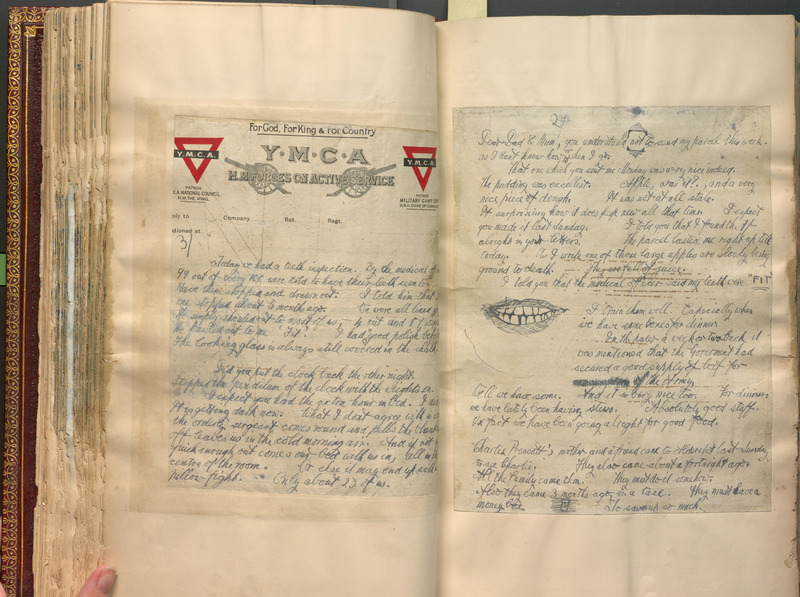 Excerpt from letter from William Thomas Clements to his family, 1917. 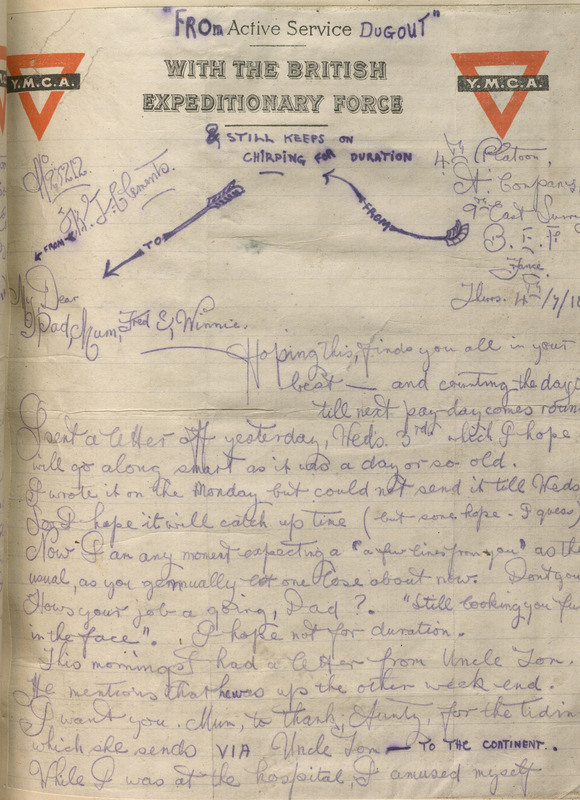 The book contains all extant letters, postcards and field service cards, written by Clements to his parents and younger siblings, Fred and Winnie, from training as well as from the front in France.

The letters written home are cheerful and full of personality. In one early letter while still undergoing training in England, Clements thanked his parents for a recent parcel, "As I write one of those large apples are slowly being ground to death. They are full of juice. I told you that the medical officer said my teeth were "FIT."" He wrote next to a smiling sketch of teeth.

In another letter written in purple pencil from France, he wrote "have had plenty of travelling 4 days, 'there to here' etc. Up to the present, I am perfectly at home as regards food. Excellent stuff. Must say I enjoy the bread made here, but the biscuits are a bit strong at time if no hot water is available ... at present I can only write about the weather so must close. Will xxxx"

A letter from 4 July 1915, Clements made additions to the YMCA letterhead to read "From Active Service Dugout with the British Expeditionary Force & Still Keeps on Chirping for Duration." 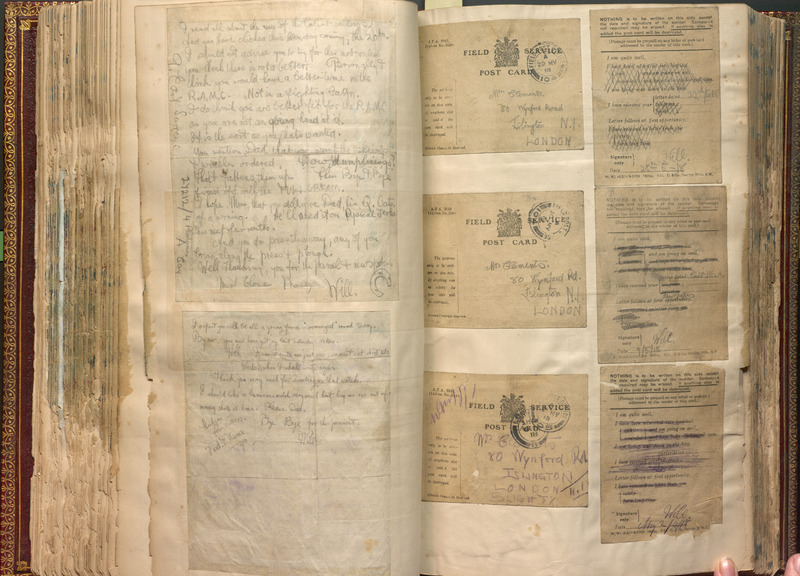 Also present in the book are letters written by the family to Clements at the front, which likely came back to the family with his kit after his death. The letters show a close-knit family, frequently with all members writing in one letter; beginning with his mother "My dear boy Will," to his younger brother, Freddie, "Dear Brother Will," before signing off with "yours ever, dad x." 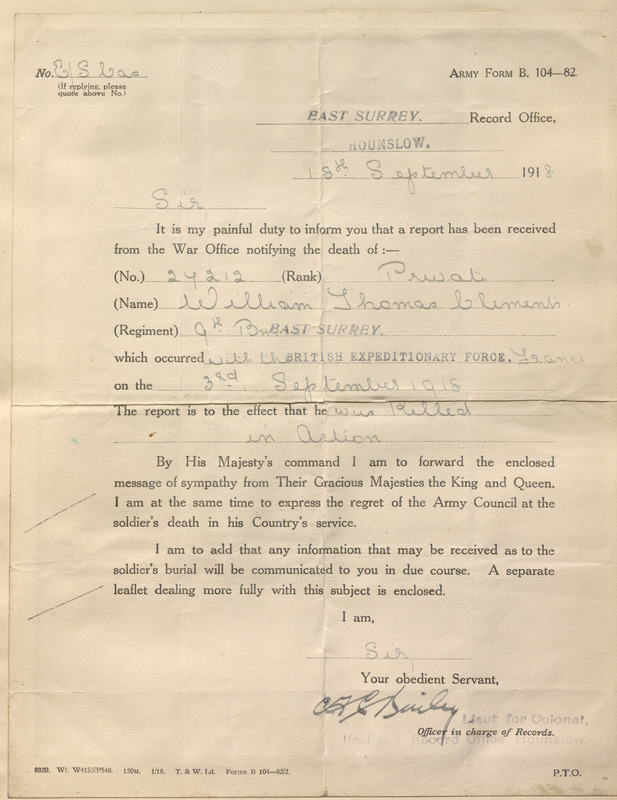 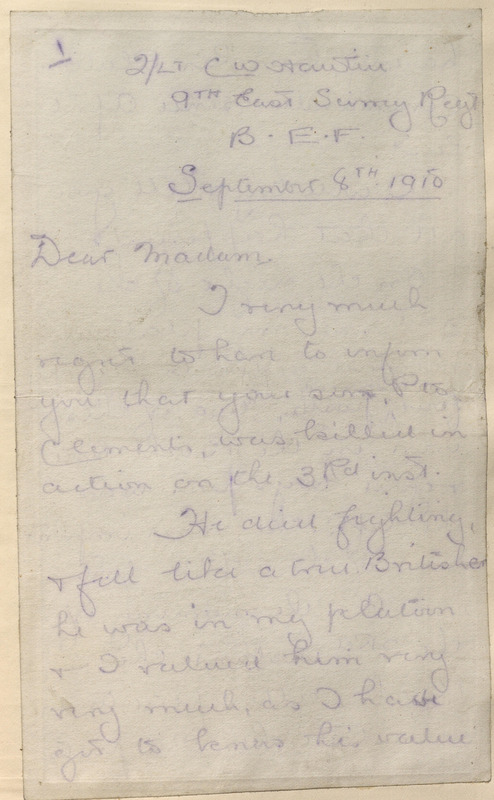 Private William Thomas Clements died in action on 3 September 1918 near Lens during the Hundred Day Offensive - the final push of the war -  and his parents were informed by official letter on 18 September 1918. This letter appears on the very first page of the book. However, it is likely that his parents first found out about their son's death through the ten-page letter that was sent to Elizabeth Clements on 8 September 1918, by Clements' superior officer, Second Lieutenant Clement W. Hawter.

This letter, preserved in its entirety in the book, is a kind and personal letter, which outlined the exact circumstances of Clements' death, as well as his funeral and Hawter's own personal anecdotes about their son. "He died fighting + full life a true Britisher he was in my platoon + I valued him very very much, as I have got to know his value having been his Platoon Commander since April last."

"We gave them a real Military Funeral + noone deserved it more than they did. The whole Battalion turned out. I will try to describe it all to you, but first I am going to run to the cemetery + pick you a flower of the cross we made him."

The letter closes out, "always remember he died fighting not only for England but for his comrades as he delayed the Bosche for a considerable time, 'Great love hath no man than this than a man lay down his life for his friends.'"

Hawter's final words must have a great impact on William and Elizabeth Clements as in 1921 when they were asked the War Graves Commission for an optional inscription to place on their son's grave at Aix Noulette Communal Cemetery in France they chose, "He died for his comrades and his friends."

This book was acquired by purchase in 2015.