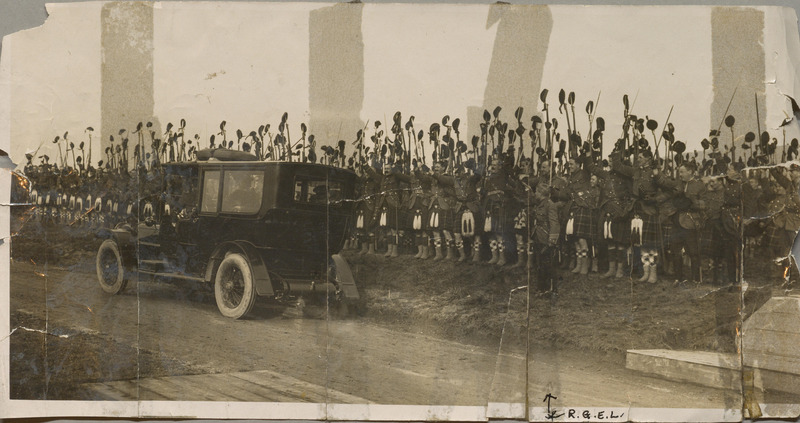 Edith Lydia Leckie (1879-1976) took an instant interest in the war. Her two brothers immediately enlisted in the Canadian Expeditionary Force and her brother-in-law served in the Royal Navy. She wrote regularly in her journal of war news and her volunteer activities in Vancouver, before she successfully applied to travel to England to assist in the war effort.

Edith's diary encompasses an almost full-year from 28 September 1914 to 1 September 1915. It  consists of daily entries, which are engaging and interesting. Edith arrived in England in March 1915 and stayed overseas for the entirety of the war.  She would later work in YMCA canteens in France, before returning to Canada in June 1920. Unfortunately, Edith's diaries from the rest of the war are not present in our collection and accordingly, we cannot know the extent of her later activities.

The entirety of Edith's diary can be viewed below with a selection of excerpts.

15 October 1914  – "Lovely warm fine day – just like summer. The Canadians have arrived in Plymouth. Bertie + Jack are with that lot + that Dorothy was able to see them. It was rumoured that Canadians troops had landed […] if my Gran could have seen her grandsons returning to her old hometown with Steele and a fine regiment."

9 November 1914 – "Busy day. Went down with the Ritchies to see Gerald Boileau off with two men who are off to join a foreign service battalion in Montreal. … but they sang and tried to be gay. It was rather pathetic."

23 November 1914 – "Rather encouraging news from the front. A German submarine has been sank and a destroyer (the latter in collision with a Danish steamer) + the Russians are [yielding] the Germans back in the second week on Warsaw.

Took Miss Hatton down to the “Dominion” I saw a lot of pictures of Canadian troops – quite a number of the Highlanders – those taken at Brickton Park – among them Bertie appeared quite often."

30 November 1914 – "St Andrews Day. Had letters from Bertie and Jack + more interesting photos … the Seaforth Highlanders which were the … the brigade photograph photographed at the Kings review. One on of them Bertie is standing beside the Queen + just behind the King + in another he is leading the regiment in the cheering as their majesties are just about to leave in their motor."

4 December 1914 – "Got a wire from Ottawa saying “your application for transportation approved. Have written.” signed Sen Macdonald. Quite exciting. Am awaiting the letter with much interest. Sat by the fire in the eve tried to think things out. Feel […] puzzled at what I ought to do."

6 December 1914 – "Got a letter from the government giving a pass to Ottawa! Have very mixed feelings about going but suppose it is too good a chance to miss."

5 January 1915 – "The French seem to be advancing a bit in Alsace + the Russians are still checking the German advance in Warsaw + advancing themselves in Salicia."

6 January 1915 – "First thing I saw in the Morning paper was that Col Samuel Hughes and Bertie had been at the Front – the former wounded in the head by a shell and the latter broken his collar bone in a motor accident. Mrs Rae Green rang up and asked if she could come in pm + which she came early … we knitted of course."

7 February 1915 – "Went to see Major Clark who was extremely kind, and gave me all my transportation to Liverpool. He advised me to the Minister of Militia (Sen Hughes). … I thanked him for my transportation + asked him about the allowance. He was very nice since I had two brothers fighting."

4 March 1915 -[aboard the Sicilian] “the captain seemed very worried at dinner and most feel tense anxious. All the life boats are ready to be used. There are three boats slipping quietly into Port with us among them the “Highland Heather” which is long overdue. We dressed in combination knickers + a sweater when we went to bed and had our life vests hand in case of accidents."

5 March 1915 – "We passed the Isle of Wight in the afr. Saw a lot of destroyers, torpedoe boats, mine sweepers and cruisers in distance. It gave me a very welcome sense of protection and an idea of the myriad of the British Navy and how well England is guarded.

The island we stopped to take on one per – a torpedo boat came nosing around to see what was happening. The per brought papers which Mrs Moss read aloud after dinner. The casualty list had O.P Bell-Irving Can. Engineers among the killed. It must be Peter or one of the two younger boys. Mrs Moss was disheartened to see the name of young Boggs of Victoria also killed so we both felt depressed."

6 March 1915 – "We got into Tilbury and our voyage was over, for which I for one was devoutly thankful, and so was the Captain for sure."

9 March 1915 – "a letter from Bertie. He had spent a night in the trench (the 26th last + jack the following night). He + Reggie Tupper had been sniped at as they came out, the bullet passing over their heads. He said he could hear the Germans talking, whistling and hammering in staples in their lines just across from theirs."

11 March 1915 – "went to the High Commissioners where I r’cd a document from Sen Highes which instead of giving me an allowance recommended me to Col. Ward for some sort of a position! It was rather startling.

Went to see Col. Ward about S.H’s letter, he was in, but I ran into Capt [Bradding] late of 104th New Minster who is in charge of the Separation Allowance department. He wanted to give me a job in his office (30/h week) but I don’t know whether I want to give up the nursing if I can get it. He took me to see Miss Macdonald who is the head of the nursing service. … tried to decide what to do, it is rather difficult."

15 March 1915 – "Enquired at the “Blue Cross” where he said he had asked for a job but they could not see me as they had so many applicants. Then went to the High Commissioners. I had a long talk with Mr Allen who is in charge of the dept."

19 March 1915 – "went to Capt Dowling’s office. He had a letter from Bertie giving his permission for me to work in the office. … Lady Carrington Oxford Sq, though it was Oxford Circus so was very late getting there. She advised me not to take up nursing + thought they need keepers in the resteraunts in France. The people she knows have to pay 10/ for their board which is too much for me.

Letter from Bertie. He + Jack are under shell fire all the time + bullets at night. Jack lives in a cellar of a house."

20 March 1915 – "Capt Dowling + as he asked me again to go in his office they are short handed … the government has asked all women to work so I feel I must do something."

26 April 1915 – "Had a terrible morning at the office. Capt. Dowling came to me with news of casualties of our regiment – every few minutes it seemed. I saw Gavin Davis, Reggie Tupper + Goodall Avery on the list of wounded. … I cried. Later he told me that Rae had been killed but he felt it was not true. However I came home then because I could not stand any more. Went back later as I wanted to hear if there was any more news. Saw Sergt Major Kelly + he said Capt Rae was not mentioned + felt very glad."