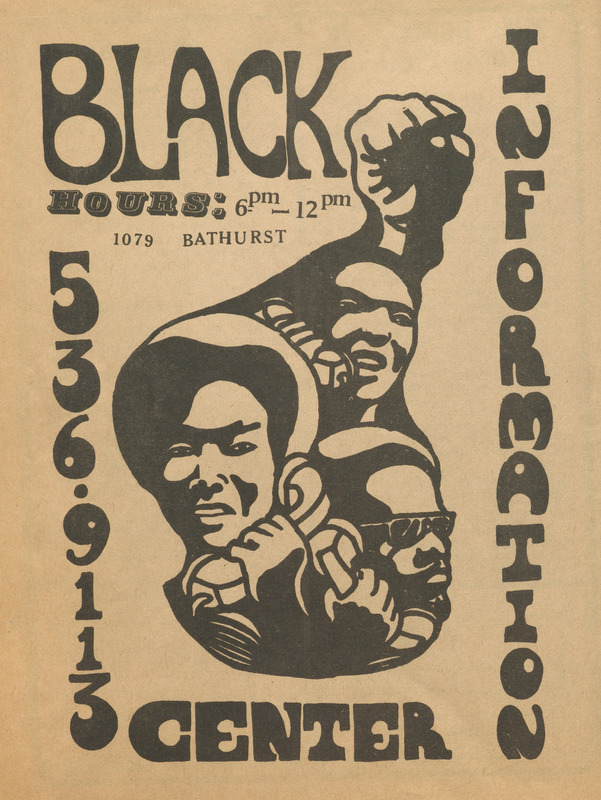 Advertisement for the Black Information Center in Toronto, printed in Black Voice, [1971?]

The civil rights movement has a long history dating back to the American Civil War. The period most historians categorize as the civil rights era occurred between 1954 and 1965, and was marked by challenges to prejudicial policies such as voting rights, segregation, and Jim Crow laws.  This period was known particularly for its attitudes of cooperation, legalism, and non-violence to achieve its demands for equal rights under the leadership of figures such as Martin Luther King Jr. The Black Power movement, which came to prominence from the mid 1960s to the mid 1970s, was heavily influenced by Malcolm X’s criticisms of King’s ideas. This movement challenged these notions by arguing for greater political and economic self-sufficiency within the Black community, leading to the founding of Black-owned bookstores, schools, media, clinics, and other ventures meant to further this goal. It was also characterized by a shift to more radical and militant forms of resistance and protest.

This section will also touch on the fight against apartheid, the repressive system based on racial segregation that existed in South Africa from 1948 to the early 1990s. Militant resistance against this system increased in the 1970s and 1980s and both influenced and was influenced by the civil rights and Black Power movements. 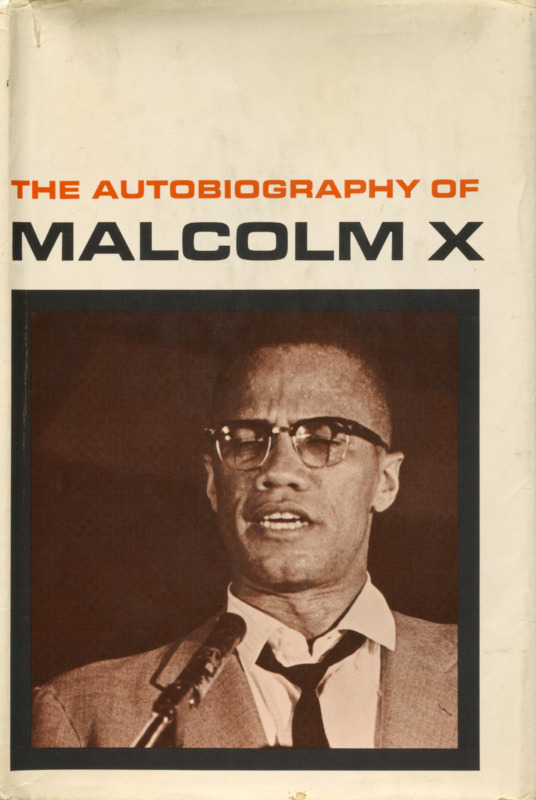 The Autobiography of Malcolm X, published shortly after the murder of the civil and human rights activist, is considered one of the most influential non-fiction books of the 20th century. Beginning with his childhood in Michigan (where he was born Malcolm Little), it details his life, including his mother’s deteriorating mental illness, his involvement in organized crime, his prison sentence in the late 1940s and early 1950s, and eventually his emergence as the spokesperson of the Nation of Islam, along with his departure from the ministry. 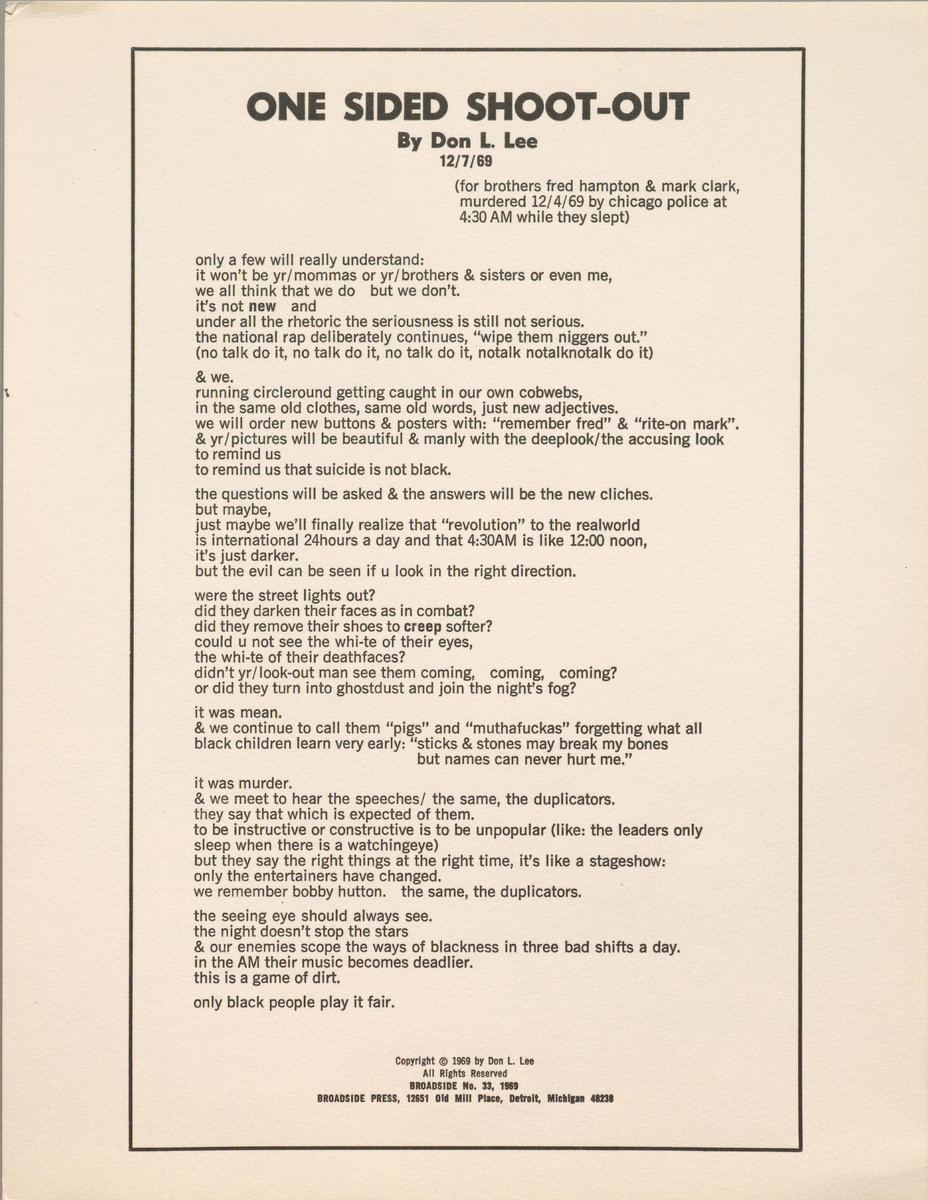 One Sided Shoot-Out is a poem written in response to the 1969 killing of Black Panther Party National Deputy Chairman Fred Hampton and party member Mark Clark during an early morning shoot-out with police, which upon later investigation was determined to be largely one-sided. 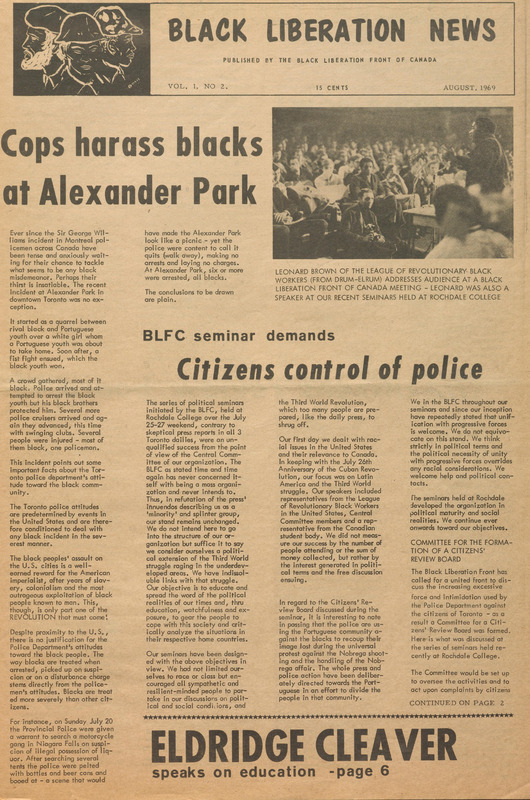 Published by the Black Liberation Front of Canada between 1969 and 1970, this underground periodical was founded to provide an alternative to mainstream news narratives about Black issues. It also provided an important forum for the discussion of activist tactics. 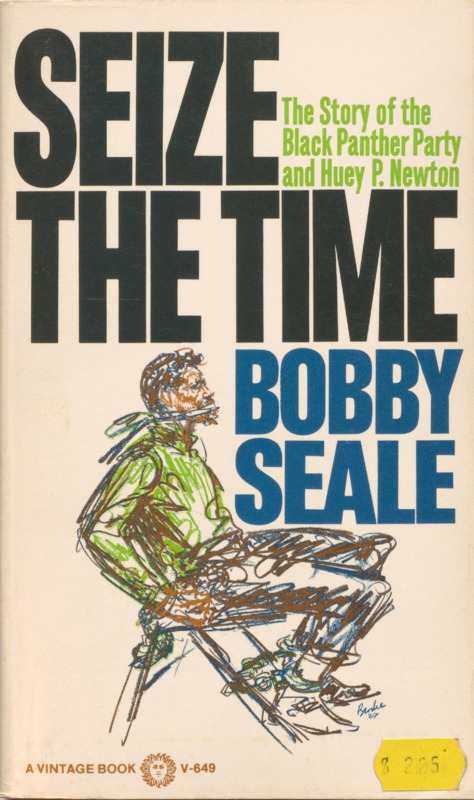 Seize the Time, recorded in San Francisco County Jail between November 1969 and March 1970, describes the causes and principles of the Black Panther Party from the perspective of Robert Seale, American political activist and co-founder of the Party with Huey Newton. 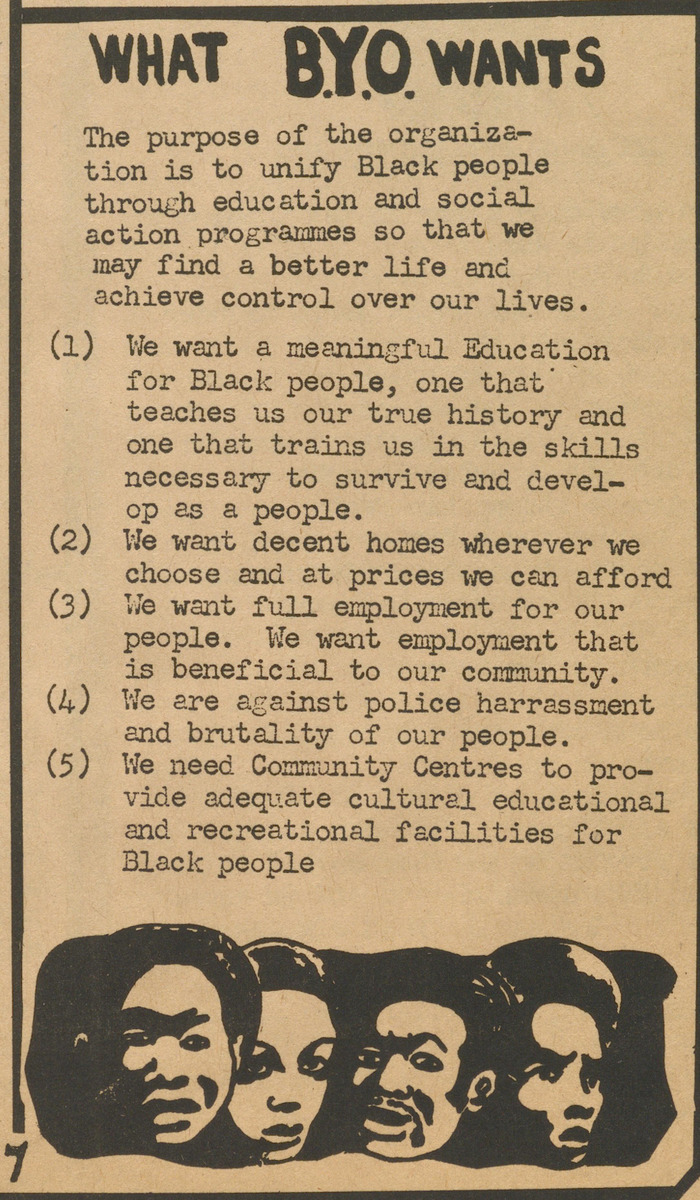 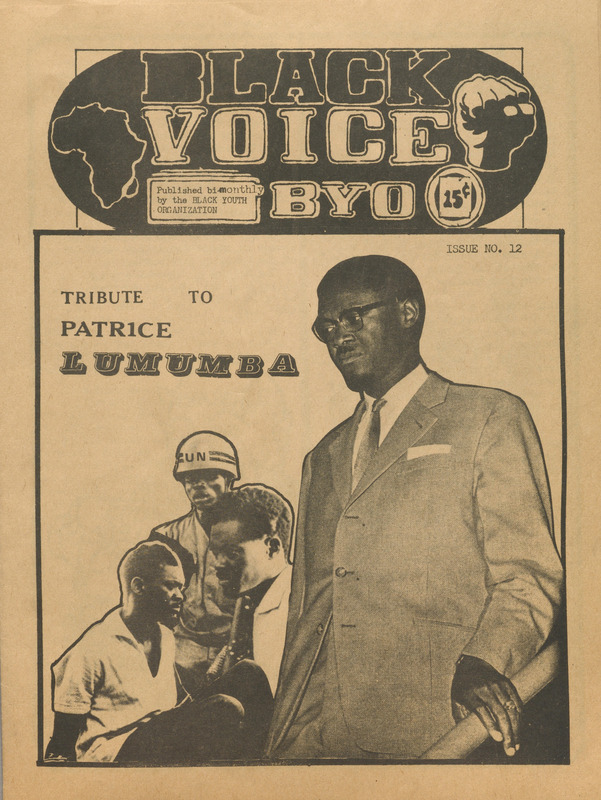 Black Voice was the bi-monthly publication of the Black Youth Organization (BYO) and was published in Toronto in the early 1970s. BYO belonged to the Black Power movement and originated from the Afro American Progressive Association (AAPA), one of the major Black Power organizations in Canada. BYO was specifically focused on empowerment and education for young people in Toronto. The newspaper was made available to their membership and sold outside of Bathurst Subway Station near the Black Information Center, which had been organized by the BYO to assist the Black community with professional, immigration, educational, and housing issues. The Fisher Library holds only issue no. 12 of Black Voice, which was likely published around 1971. This issue, which features editorials, articles, reports, poems and illustrations focuses on Black issues both at home and internationally, and promotes local Black businesses and the actions and goals of the BYO.

[Incorporation, Progress, and Aims of the Black Action Party]. Montreal: 1971. 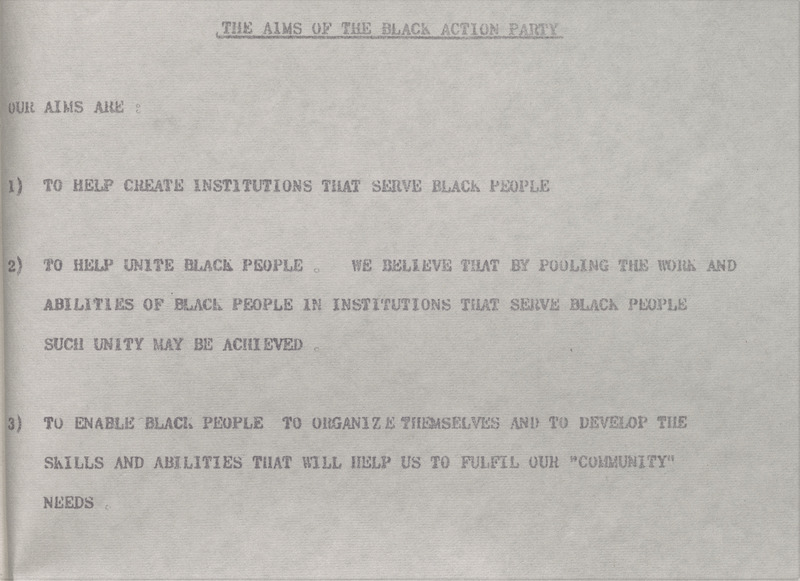 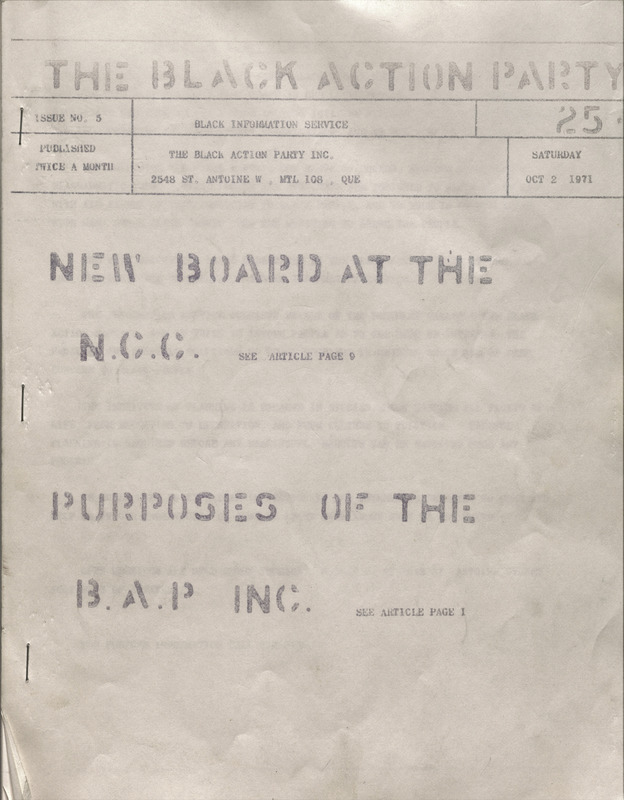 The Black Action Party (BAP) was a Black Power organization that formed in Montreal due to the rise of Black radical politics in both the United States and Canada. 'The Congress of Black Writers: Towards the Second Emancipation, the Dynamics of Black Liberation', which took place at McGill University in October 1968, brought Black liberation causes and social change to the forefront. The BAP was revolutionary in nature and influenced by the Black Panther Party. Headquartered in the Negro Community Centre at 2035 Coursol Street, the BAP received incorporation status as a non-profit organization in 1971 and released their structure, progress, and aims through a hand-stapled pamphlet, which was released through the Black Information Service on 2 October 1971. 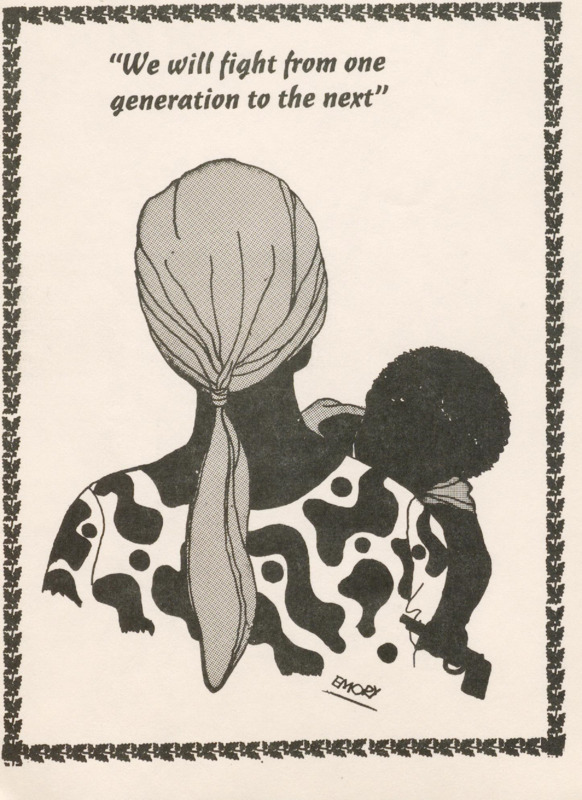 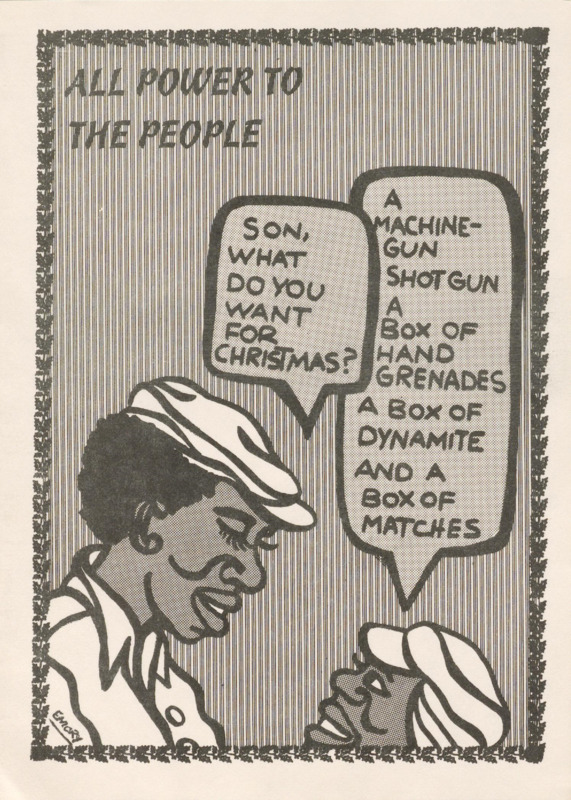 Formed in 1966 in response to police brutality in Oakland, California, the Black Panther Party organized armed citizen patrols of Oakland and other US cities, while also providing community support services such as breakfast programs and medical assistance to underserved areas. The Party was part of the larger Black Power movement. These pamphlets were designed by the Party’s Minister of Culture, Emory Douglas, who also designed the Black Panther newspaper. 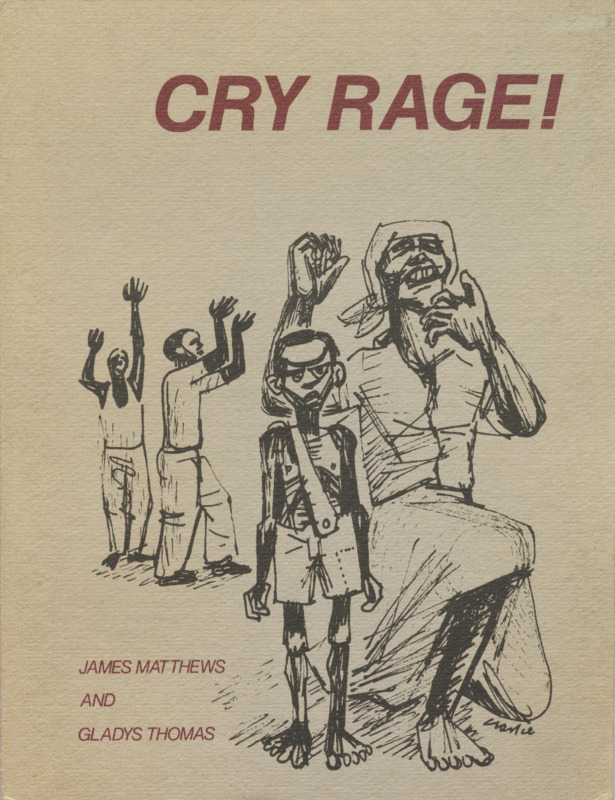 Cry Rage!, co-authored with Gladys Thomas, was James Matthews’ first collection of poetry. It contains works that are highly critical of the apartheid regime then in power in South Africa. In the foreword, Matthews states that ‘the declarations in this book are by a housewife and myself, a man of no account, who refuse to remain silent at all the injustices done to blacks'. It was banned by the government, as were many of his later works. Matthews himself was later detained by the authorities and denied a passport for thirteen years.