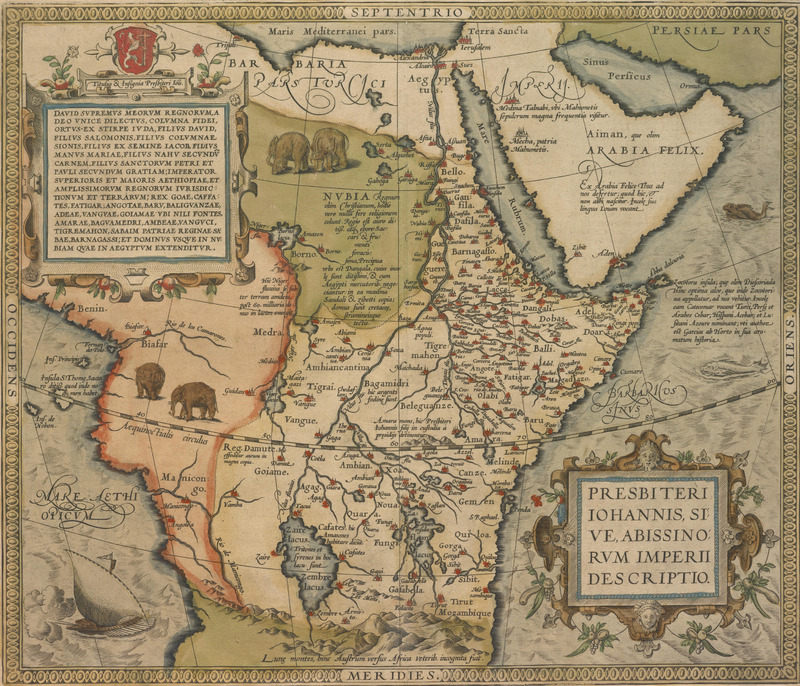 European contact with and knowledge of Africa, at least beyond those regions along the Mediterranean coast, was extremely limited until the fifteenth century, when Portuguese sailors first began exploring the west coast of Africa, with expeditions eventually rounding the Cape of Good Hope (in 1488) and making it all the way to India (in 1498). Other European powers soon followed. Despite the first-hand evidence provided by such voyages, traditional European conceptions of Africa persisted, and maps of the continent from this period not infrequently make space for myth and legend as well as geography. One particularly persistent example of this is the figure of Prester John, a legendary Christian ruler associated with Ethiopia until well into the 17th century. Produced in a context not simply of geographical exploration, but also of colonial exploitation, these maps must be treated carefully as sources, and the practices of colonialism that inform them must constantly be born in mind. 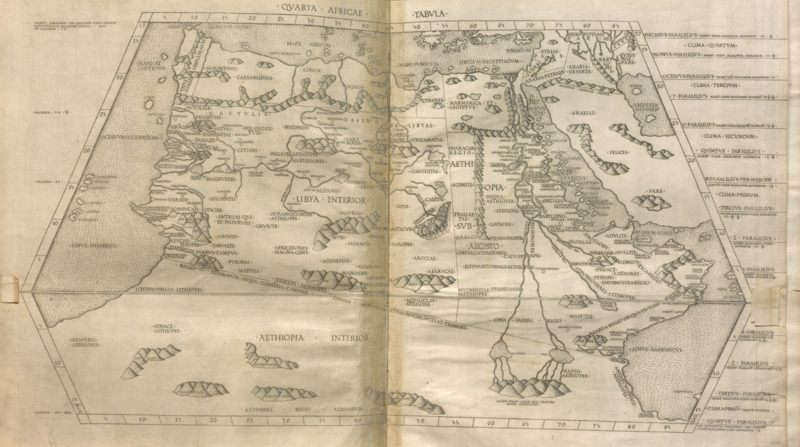 Petrus de Turre’s 1490 edition of the Cosmographia, also known as the Geographia, contains the earliest printed maps of Africa currently held by the Fisher Library. Though highly accurate in many respects, it reflects a lack of knowledge of the African continent as a whole. Ptolemy’s atlas includes four maps of Africa, but only the northern- and western-most regions. 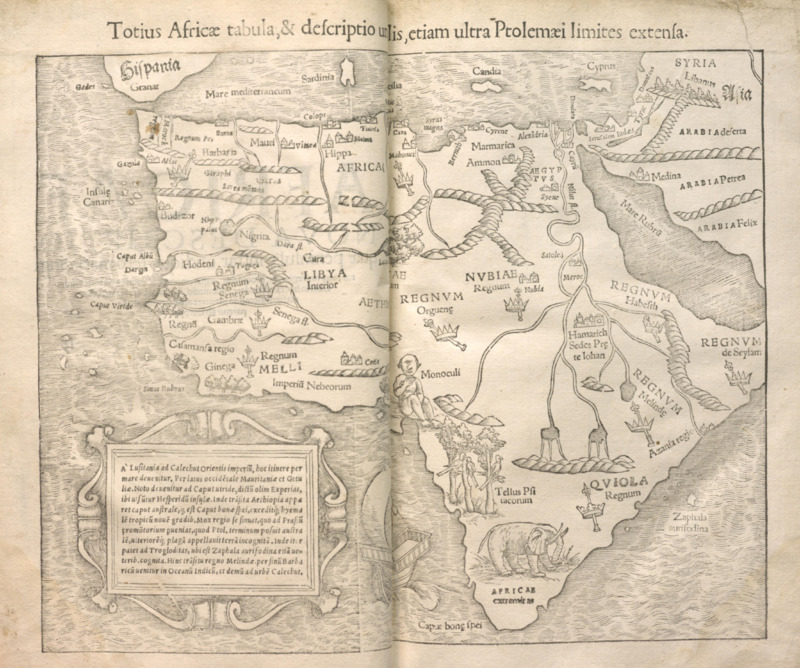 Sebastian Münster’s Cosmographiae universalis Lib. VI contain several of the most significant maps in the history of cartography, including some of the first maps of the entire African continent. Instead of relying solely on Ptolemy’s projections, Münster included information collected first-hand by Renaissance Portuguese explorers, making these some of the most geographically accurate maps available at this time. In particular, the coastlines were drawn more accurately, though the interior regions of the continent remained little known in Europe. Münster’s maps include images of and textual references to the myths and superstitions that Europeans supplied in place of their lack of knowledge, including a depiction of a mythical ‘monoculus’, or one-eyed man. 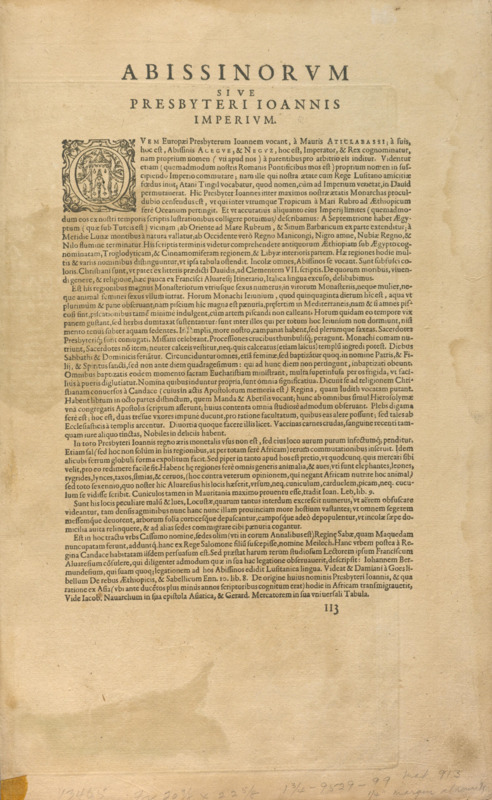 This map of Africa, which comes from an atlas produced in the famous Plantin-Moretus printshop, takes as its organising principle the legendary figure of Prester John. Tales of a Christian king ruling somewhere in the Orient had existed in Europe since at least the 12th century, but with no trace of such a ruler having been found in Asia, the location of his kingdom was slowly transferred to Africa. Here, at least, there was known to exist a powerful Christian state: the Ethiopian Empire. By the early 15th century, however, ‘Prester John’ was being used not as a personal name, but as a title synonymous with the Ethiopic ‘negus’ (or ‘monarch’). The text accompanying this map recognizes that Prester John is simply the European equivalent for negus, though the map itself takes the legendary king seriously enough to provide his official title and coat of arms. The idea that there was or had ever been an Ethiopian ruler named (or bearing the title) Prester John was finally confuted in the 17th century by Hiob Ludolf, one of the founders of Ethiopian studies in Europe.

Portolan Atlas. Probably Venice: Second half of the 16th century.

This collection of portolan charts includes thirteen maps, three of which feature parts of the African coastline. Portolan charts were made in many parts of Southern Europe from the 13th to the 17th century and were designed to be used by seafarers. They originally restricted themselves to the Mediterranean basin, though over the course of the 15th and 16th centuries they came to cover many other parts of the world as well. As navigational aids, their focus was naturally on coastal features, as is evidenced by the detailed listing of placenames along the coasts of Africa. Inland Africa is depicted in much less detail, but such detail as is provided reflects the severely limited nature of European knowledge of African geography at this time. The Nile, for example, is shown rising in the semi-mythical Mountains of the Moon. The charts in this atlas have been attributed to Giorgio Sideri, also called Callapoda, a cartographer from Crete who worked mainly in Venice. 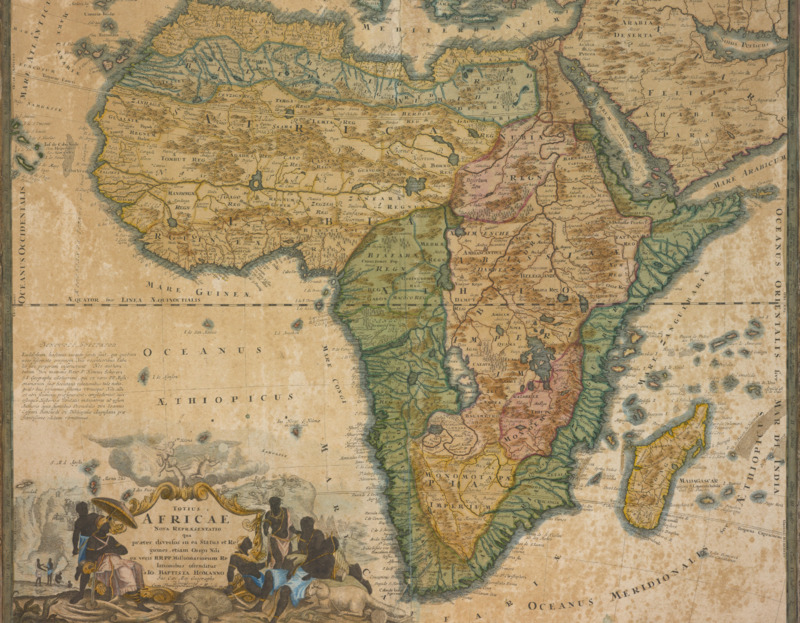 Johann Baptist Homann’s map of Africa dispenses with many of the more fanciful elements found in the 1595 map from the Plantin-Moretus printshop that is also included here. Nowhere is there a mention of Prester John, and the lake marked in the 1595 map as the home of tritons and sirens has lost its mythological inhabitants. Nevertheless, the representation of Africa in Homann’s map continues to ask, and to attempt to answer, questions about the continent that had had a long history in Europe, and it retains a vision of Africa as remote, strange, and exotic that goes back to antiquity. Homann is particularly concerned, for example, to locate the furthest source of the Nile, a topic of scholarly interest and debate among European intellectuals since at least the time of Alexander the Great. Similarly, the sheep with a tail so large that it requires a cart, an image of which is found next to the cartouche in the lower left corner, is an idea taken straight from the Classical Greek historian Herodotus. Homann does, however, employ more recent evidence too. His location of the source of the Nile, for example, is based on work done by the Jesuit cartographer Heinrich Scherer, Homann’s contemporary, who drew in turn on reports by Jesuit missionaries.