Theatre Companies and Productions in Toronto 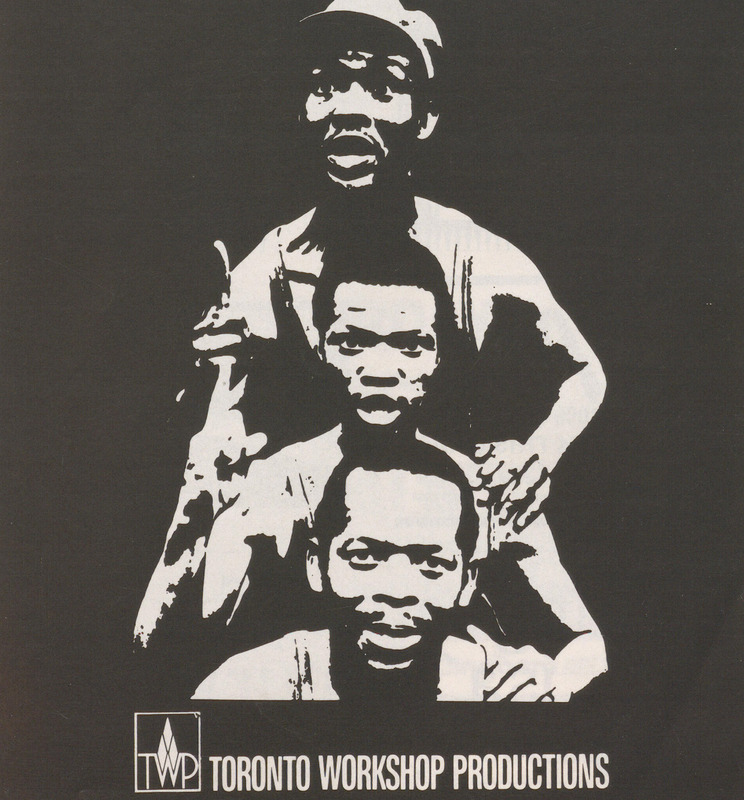 Detail from the playbill of Bopha!, 1988

The Thomas Fisher Rare Book Library has a collecting strength in Canadian, and particularly Toronto, theatre history. This includes a collection of nearly 500 Toronto-based theatre posters, most prominently from the 1980s, and an extensive collection of Canadian theatre programs, promotional flyers, review clippings, and photographs. The latter encompasses 76 archival boxes and dates between the 1880s and 2017. The collection includes material related to theatre productions in every Canadian province, in both big cities and small towns. Nearly two-thirds of the material relates to theatre productions that took place in Toronto, from major theatres and companies such as the Canadian Opera Company, the Elgin Theatre, and the Canadian National Ballet, and smaller professional and amateur productions held by current or now-defunct companies and community theatres. The result is an excellent resource for research, especially between the 1960s to the 1990s. Existing within these boxes are examples of the rich history of Black theatre productions and Black theatre Companies, which came first came to prominence in Toronto in the 1970s.

Below are a few examples of the material that can be found within these collections. 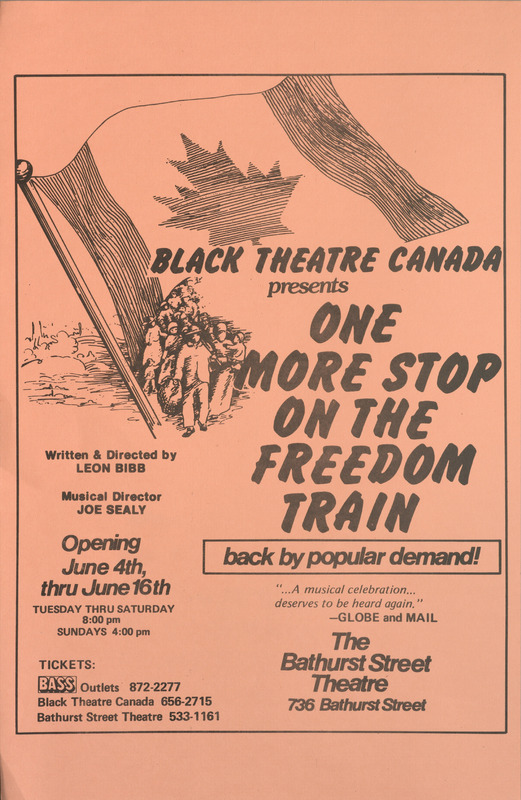 In 1973, Vera Cudjoe founded Black Theatre Canada in Toronto to develop, stage, and perform Afro-Caribbean and Black Canadian stage productions. The company also produced and staged original Canadian plays, including One More Stop on the Freedom Train, which was written and produced by the Black American-Canadian performer and activist Leon Bibb. This play about the Underground Railroad in Ontario toured across Canada in 1985, and was performed at Vancouver Expo in 1986, before returning for an encore performance in Toronto.

Black Theatre Canada was dedicated to creating cultural awareness in their Toronto community, which included touring schools and training young Black actors and playwrights through workshops. The company ceased operation in 1988.

Jeff Henry. Africa in the Caribbean. Toronto: Theatre Fountainhead, May 1976. 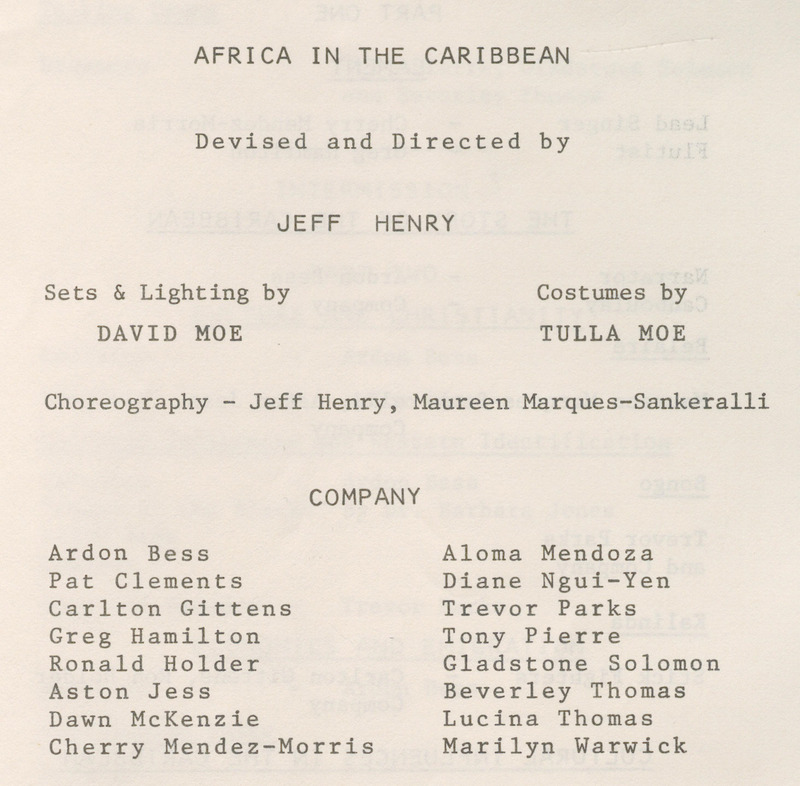 Detail from the playbill of Africa in the Caribbean, 1976. 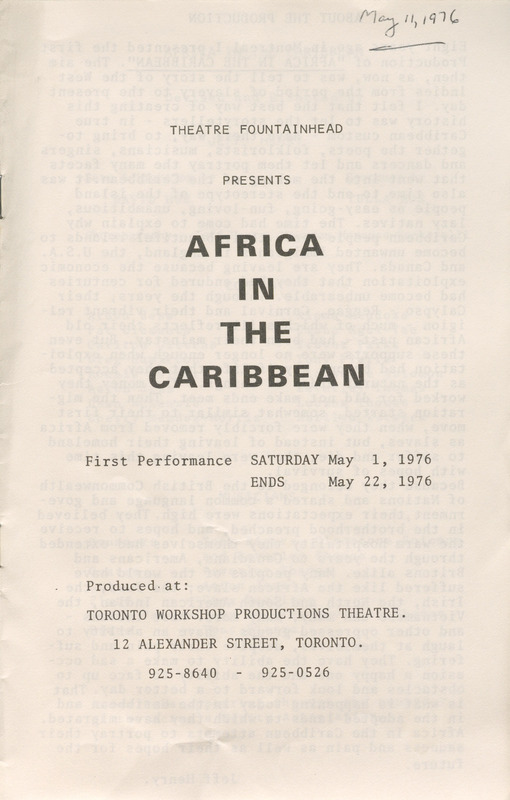 Jeff Henry founded Theatre Fountainhead in 1974. Henry, an actor, director, and playwright, had been an original founder of the Black Theatre Workshop in Montreal in 1971, before moving to Toronto to join the Theatre Department at York University. Henry, who was born in Trinidad, established Theatre Fountainhead to develop, produce, and stage productions with Black playwrights, actors, directors, and designers. This included his own production, Africa in the Caribbean, which was performed at the Toronto Workshop Productions Theatre on Alexander Street in 1976.  In his notes, Henry wrote that the production was 'to tell the story of the West Indies from the period of slavery to the present day. I felt the best way of creating this history was to let the storytellers – in true Caribbean custom – have their way, to bring together the poets, folklorists, musicians, singers and dancers and let them portray the many facets that went into the making of the Caribbean'. Theatre Fountainhead ceased productions in 1990. 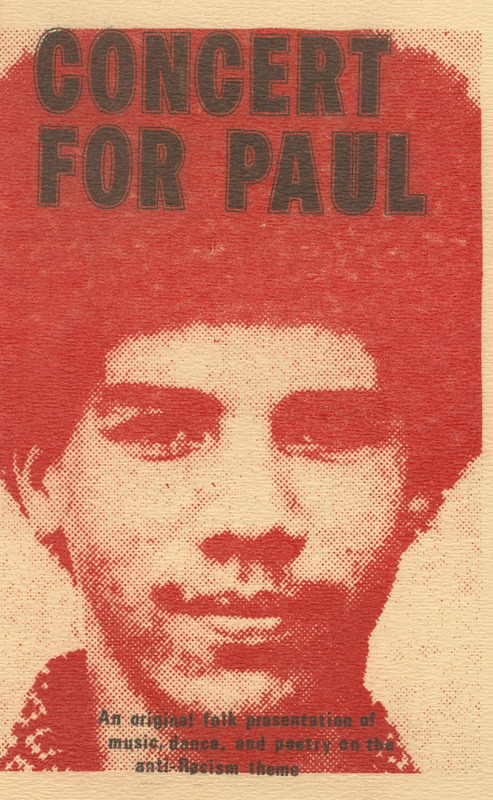 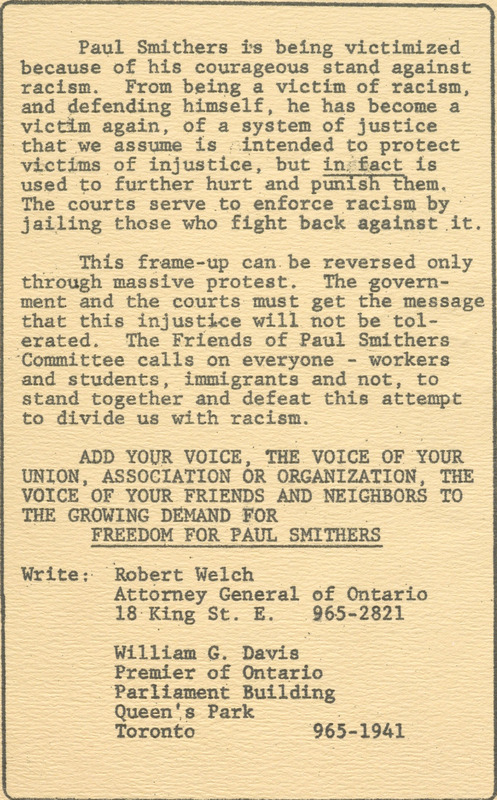 The Friends of Paul Smithers Committee. Concert for Paul: An Original Folk Presentation of Music, Dance, and Poetry on the Anti-Racism Theme. Toronto Workshop Productions, [1973 or 1974].

In 1973 or 1974, the Friends of Paul Smithers Committee put together a night of entertainment including performances by Dick Smith, the Harvelites Quarter, Doug Johnston & Contemporary Arts Ensembles, and a Caribana Carnival Preview, along with speeches by notable Black Canadian activists including Elizabeth Cromwell, Arnold Auguste, and Charley Roach. The event was to benefit Paul Smithers, who in 1973 at age 16 was the only Black player in his Mississauga-based hockey league. At a game against Applewood, Smithers was taunted repeatedly with racial slurs by the opposing team and their home crowd. After the game, Smithers and members of the other team fought in the parking lot, one member of the team choked on his own vomit and died, resulting in Smithers’ arrest and a charge of manslaughter. This event was likely held before Smithers was convicted by an all-white jury in October 1974 as the program encouraged 'everyone – worker and students, immigrants and not, to stand together and defeat this attempt to divide us with racism'. 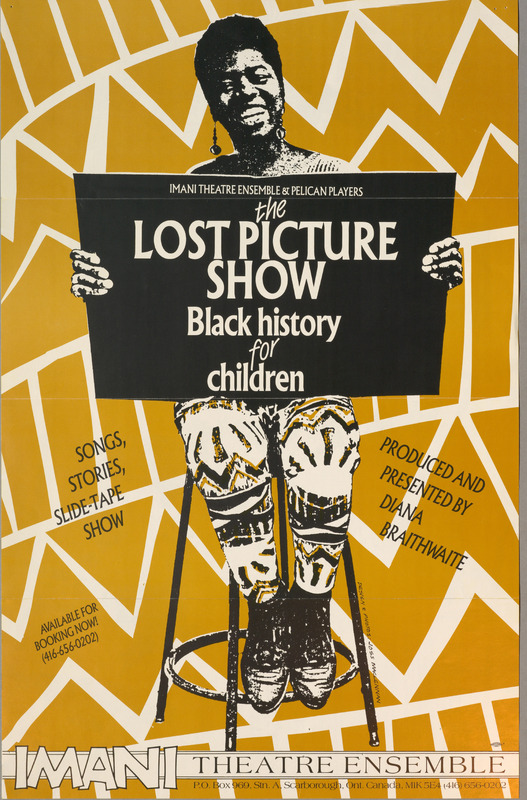 The Imani Theatre Ensemble/Pelican Players was a lesser-known Black Theatre Company operating in Toronto in the 1980s. Diana Braithwaite is a songwriter, performer, screenwriter, and playwright, who at one time was the artistic director of the Imani Theatre Ensemble.  Her performance of The Lost Picture Show: Black History for Children included songs, stories, and a slide-tape show and was aimed at providing an entertaining account of Black history for children in Toronto. 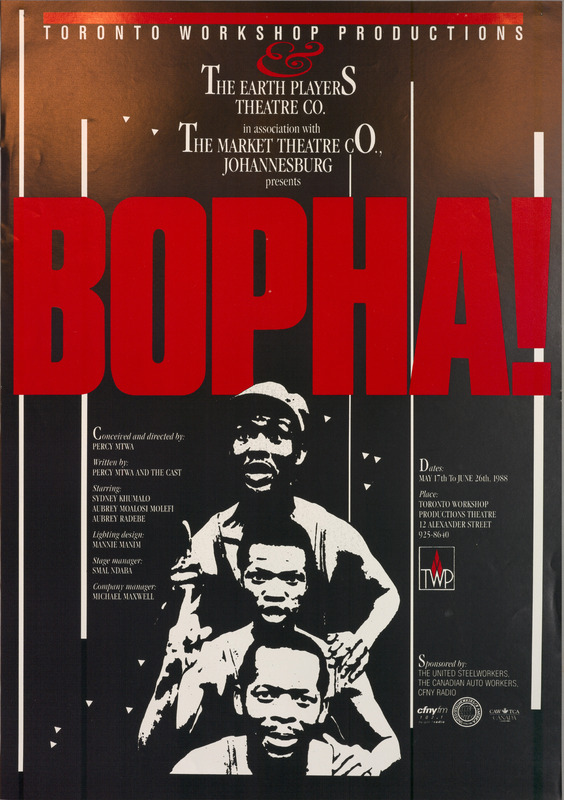 In June 1988, the Toronto Workshop Productions Theatre hosted the Canadian premiere of the South-African theatre production of Bopha! This three-person production, performed by the original South African cast, focused on the issues faced by Black police officers during apartheid in South Africa.  Bopha! was the third South-African Market Theatre production to come to Canada and attracted large audiences, both Black and white, before touring through Canada.

[Poster for the First Production of Djanet Sears’s Africa Solo]. 1989. 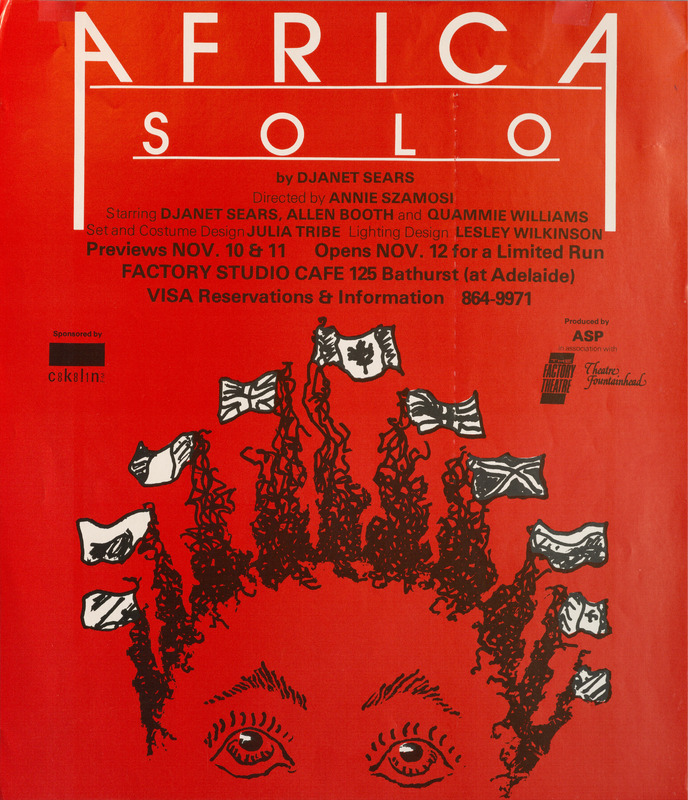 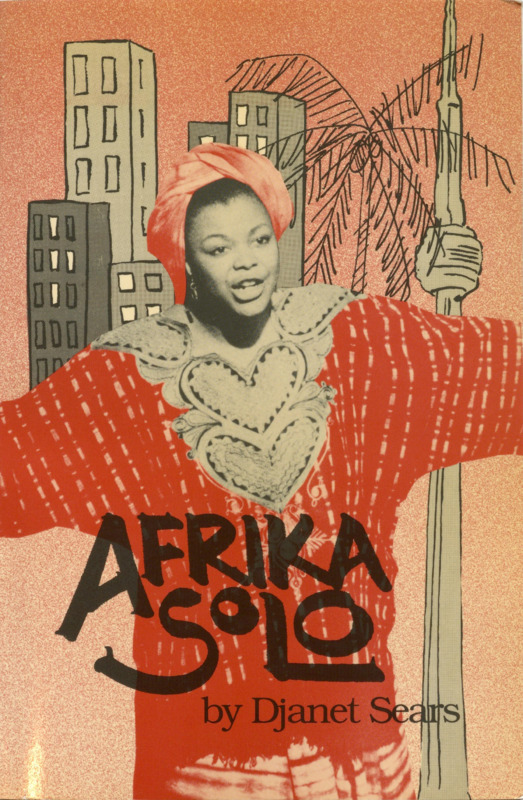 Djanet Sears (1959-) is a renowned Canadian playwright, actor, and director. She wrote Africa Solo, which was produced by Theatre Fountainhead and premiered at the Factory Theatre Café in Toronto in November 1989. This poster for the first production of the semi-autobiographical Africa Solo details that the play starred Sears, Allen Booth, and Quammie Williams. The script, then titled Afrika Solo, was published one year later by Sister Vision: Women of Colour Press in Toronto, making it the first play to be published by an African-Canadian woman. Sister Vision operated from 1985 to 2001 and was the first press in Canada whose mission was to publish writing by women of colour.