Heir to various ancient states, most notably the kingdoms of D’mt and Aksum, Ethiopia enjoys a rich cultural and political history. The earliest phase of Ethiopian literature occurred during the Aksumite period and is closely related to the introduction of Christianity in the 4th century. No datable works survive from the 8th to the 12th centuries, but a great flowering of Ethiopian literature occurred from the end of the 13th to the beginning of the 16th century. The Ethiopian translation of the Didascalia included in this section dates from this period. By this time Ge‘ez, the language of Aksum, was no longer a living language, but it remained the language of the liturgy and of letters.

European knowledge of Ethiopia was founded as much on legend as fact until the 17th century. The association of Ethiopia with the legendary kingdom of Prester John proved particularly persistent; it was finally refuted by the German scholar Hiob Ludolf, some of whose works may be found on this page. This was just one of many contributions to the study of Ethiopian history and culture made by Ludolf, who is often seen as one of the founders of the discipline of Ethiopian Studies in Europe. At least some of Ludolf’s scholarship, however, was the product of collaboration rather than solitary labour—his Ge‘ez-Latin dictionary, for example, owed much to the learning of the Ethiopian monk Abba Gorgoryos. Nevertheless, Ludolf’s works paved the way for later writers such as José Pereira de Santana, whose hagiography of two Ethiopian saints is also included here. 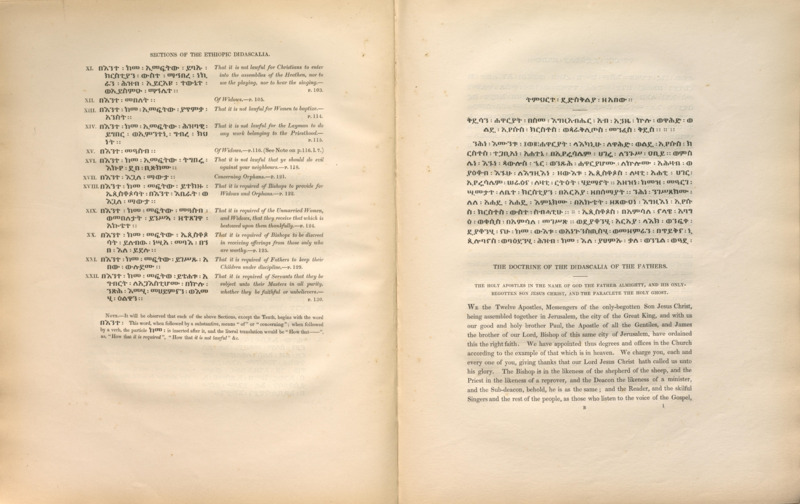 The Ethiopic Didascalia, or, The Ethiopic Version of the Apostolical Constitutions, Received in the Church of Abyssinia: With an English Translation. London: Published for the Oriental Translation Fund of Great-Britain and Ireland, by Richard Bentley ..., 1834.

The Ethiopic Didascalia is a translation, probably made from an Arabic version, of a text originally written in Greek. In addition to the Ethiopic and Arabic versions, a Syriac version and fragments of a Latin version survive; the Greek original has been lost. Although the Didascalia purports to record the instructions for Christian practice set out by the Twelve Apostles at the time of the Council of Jerusalem, the text was actually composed much later, probably in the 3rd century. The translation into Ethiopic was probably made in the 14th century or thereabouts. Though some sections of the Didascalia concern the activities of specific church officials, setting out the various responsibilities of bishops, priests, and deacons, it also contains sections of more general application, covering such topics as the duties of husbands and wives, the place of widows and orphans in society, and a lengthy prohibition on the practice of idolatry. 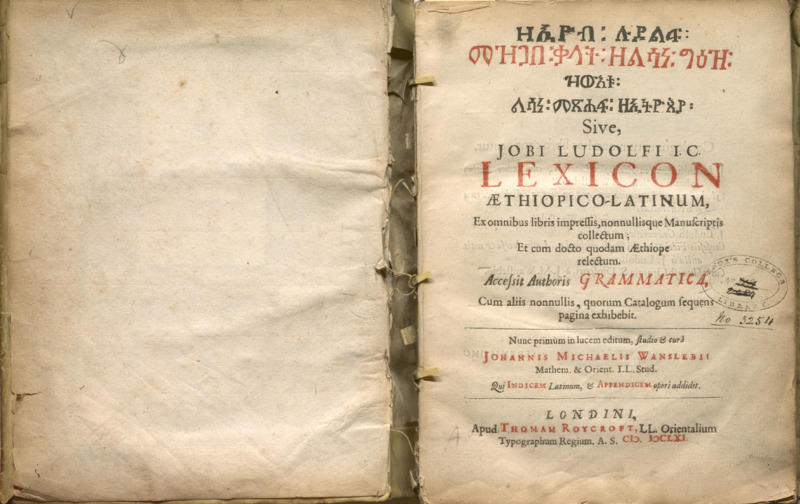 Hiob Ludolf’s Ge‘ez-Latin lexicon, published together with a grammar of the Ge‘ez language, was the first of its kind to appear and remained a standard reference work for nearly two centuries. Together with his studies of Ethiopian history and religion, these works have made Ludolf’s reputation as one of the founders of Ethiopian Studies in Europe. But although Ludolf’s is the only name to appear on the title page of his lexicon, the achievement was not his alone. Ludolf acquired his knowledge of Ge‘ez from Abba Gorgoryos, an Ethiopian monk whom he met at Rome. Gorgoryos subsequently travelled to Gotha with Ludolf, where they collaborated on the writing of the lexicon and grammar. The only concession to Gorgoryos’ contribution to be found on the title page comes in the comment that the work was ‘reviewed by a certain learned Ethiopian’. 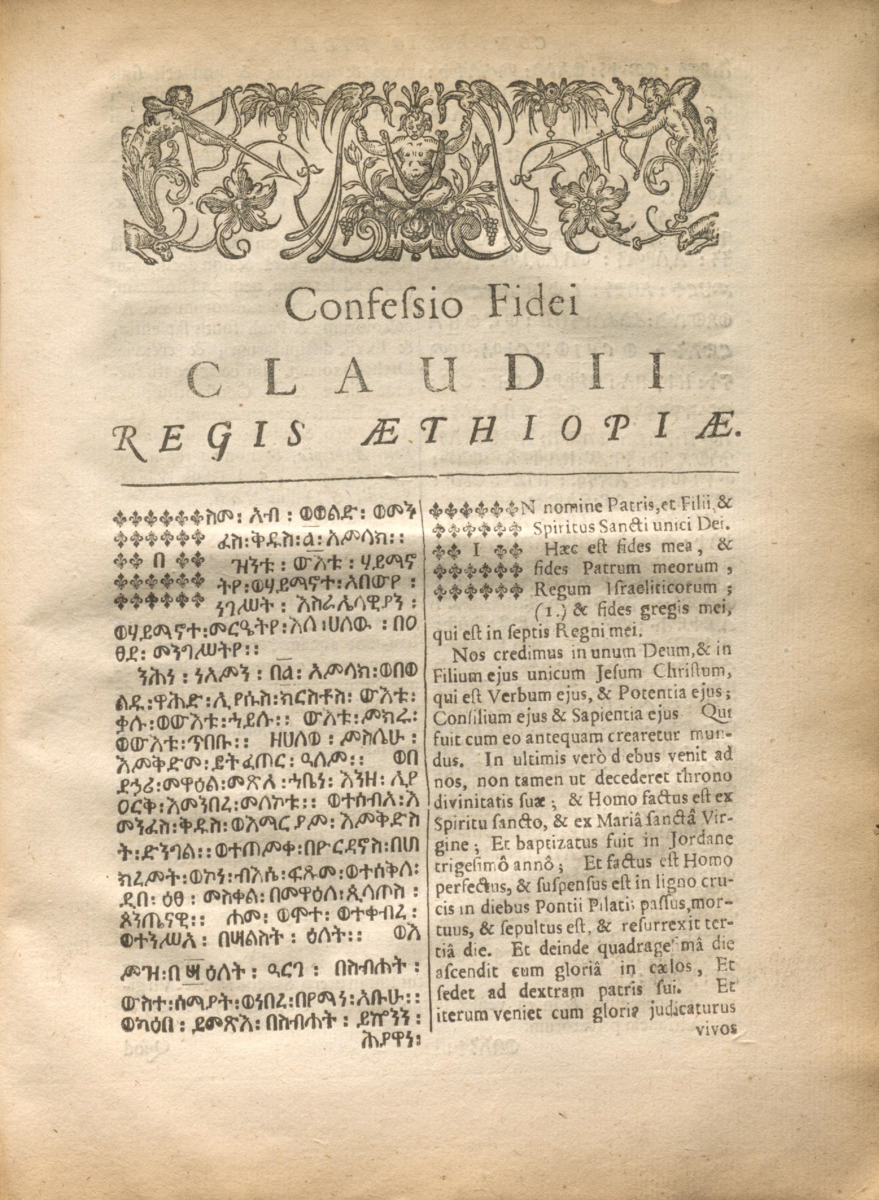 Gelawdewos, rendered Claudius in Latin, ruled as Emperor of Ethiopia from 1540 to 1559, a period of increasing interest in the country on the part of European missionaries. Having endured the machinations of João Bermudes, a Portuguese priest who in Europe claimed to be the Patriarch of Ethiopia and in Ethiopia claimed to be the Patriarch of Alexandria, Gelawdewos received two Jesuit missions in the 1550s. In response to the arguments presented by these missions, Gelawdewos wrote this confession of his faith. The work defends the Miaphysitism—the belief that Christ was fully divine and fully human in one nature, rather than one divine person and one human person in two natures—that was the position of the Ethiopian Orthodox Tewahedo Church. The Fisher’s copy of Hiob Ludolf’s Latin translation of the Confessio fidei is bound together with the Ge‘ez-Latin lexicon compiled by Ludolf and Abba Gorgoryos. 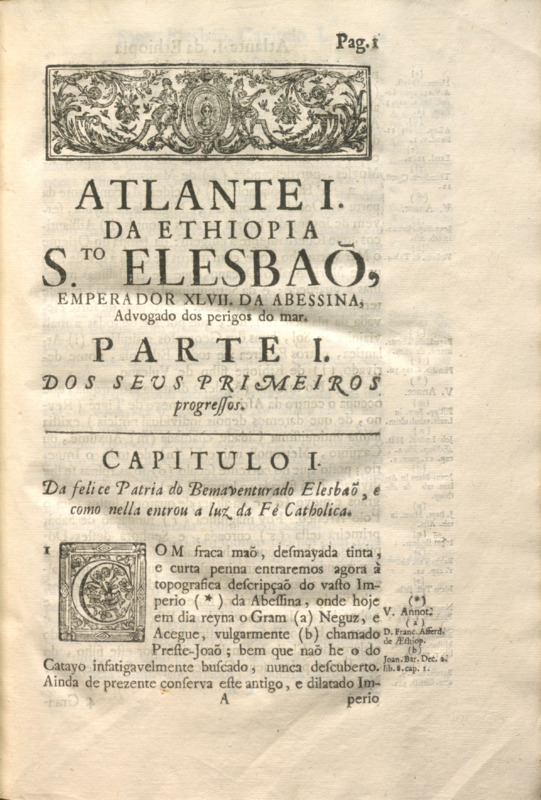 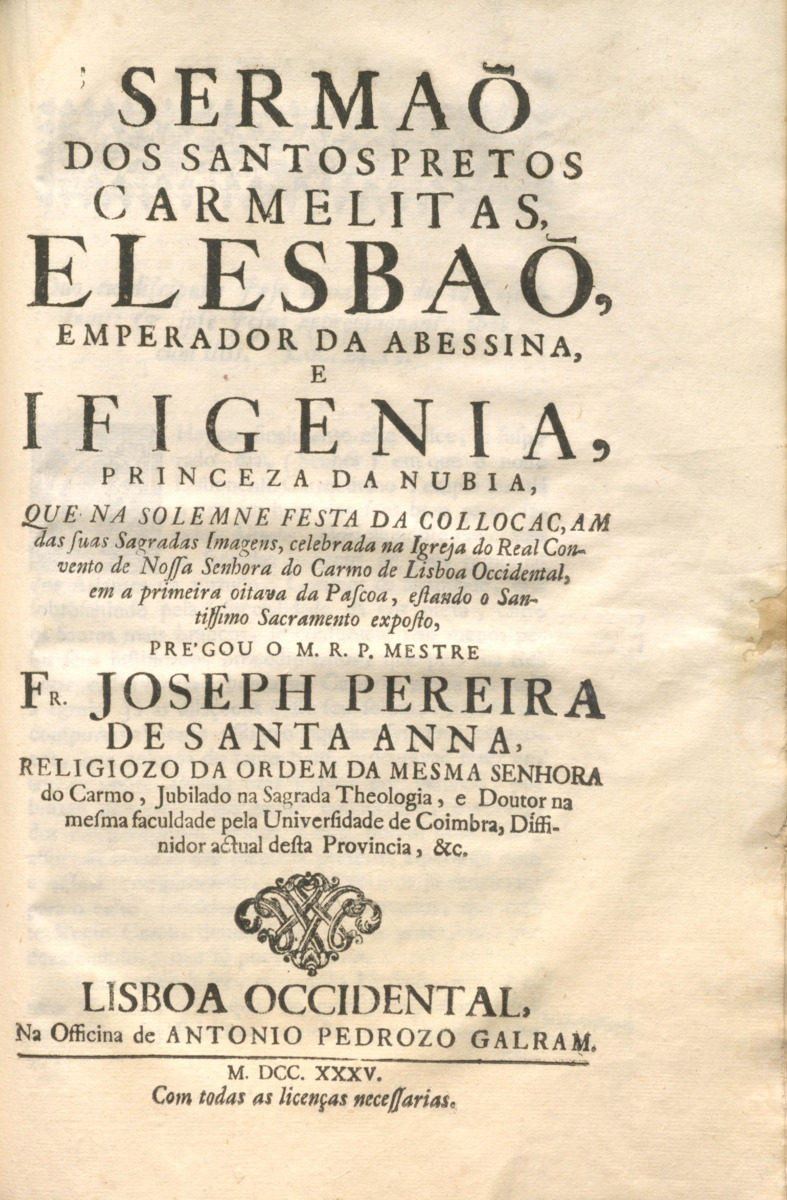 José Pereira de Santana, who was born in Rio de Janeiro, Brazil, in 1696, joined the Carmelite Order at a young age and, having shown scholarly talent, was sent to study at the University of Coimbra in Portugal. He was appointed to the Chair of Theology at the same university in 1725. In 1735-1738 he published this two-volume hagiography of two Ethiopian saints, Saint Elesbaan and Saint Ephigenia. Saint Elesbaan, also known by the name Kaleb, was a sixth-century king of the powerful state of Aksum, located in modern-day Ethiopia and Eritrea. On hearing that Dhu Nuwas, a Jewish king of Himyar, was persecuting his Christian subjects, Kaleb invaded the Himyarite lands and (briefly) established Aksumite control over them. Saint Ephigenia, on the other hand, is largely a figure of legend. She was believed to have been a virgin converted to Christianity by Saint Matthew the Apostle and then martyred as a result of her refusal to marry one Hirtacus, who had succeeded Ephigenia’s father as ruler of Ethiopia. In his hagiography, Santana presents these two figures as exemplars of African Christianity, while also reimagining them both as members of the Carmelite Order. More specifically, he presents Saint Elesbaan as a symbol of Christianity’s triumph over Judaism, and Saint Ephigenia as a model for the conversion of Black enslaved people in the Americas. Shortly after the publication of Santana’s work, a Venerable Brotherhood of Saint Elesbaan and Saint Ephigenia was indeed established in Rio de Janeiro by former enslaved people from various parts of Africa. The Fisher’s copy of Santana’s hagiography is bound together with a copy of a sermon on the two saints delivered in Lisbon in 1735.