Abolition and the Anti-Slavery Society of Canada 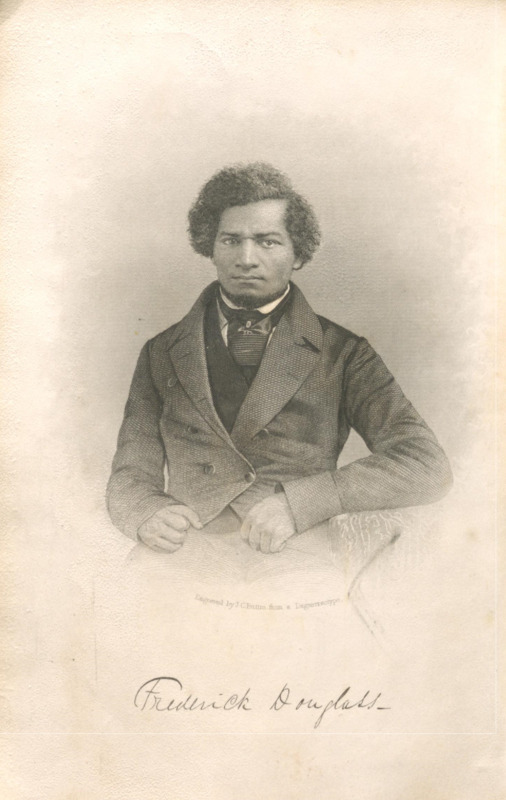 Frontispiece portrait of Frederick Douglass published in My Bondage and My Freedom, 1855.

The abolitionist movement first came to prominence in Britain, when in 1772 Lord Mansfield, Chief Justice of the Court of the King’s Bench, declared in judgment that slavery was contrary to English common law. This was followed by the Slave Trade Act of 1807, which prohibited the slave trade in the British Empire. To enforce this act, the British Royal Navy established the West Africa Squadron in 1808, which patrolled the coast of Africa and seized ships involved in the Trans-Atlantic slave trade heading to the United States, the Caribbean, and South America.

Slavery in northern American states was largely abolished due to the influence of Quakers in the late 18th-century and early 19th-century but remained legal and established in all southern states. The Fugitive Slave Act, passed by the United States Congress in 1850 as a concession to the South, allowed slave owners to reclaim escaped slaves even in northern states. It spurred greater action to the abolitionist cause and increased movement into Canada by those escaping slavery.  Societies such as the Anti-Slavery Society of Canada and books on abolitionist themes became incredibly popular during this period. This page showcases the history of the Anti-Slavery Society of Canada and some of the best-known abolitionist texts, including the seminal novel Uncle Tom’s Cabin by Harriet Beecher Stowe (1852). The publication of Uncle Tom's Cabin was followed by a revised and expanded edition of Rev. Josiah Henson's autobiography (1858), Henson's original printing in 1849 having served as the original inspiration for Stowe's novel. It also includes My Bondage and my Freedom by Frederick Douglas and Autobiography of a Fugitive Negro by Samuel Ringgold Ward. 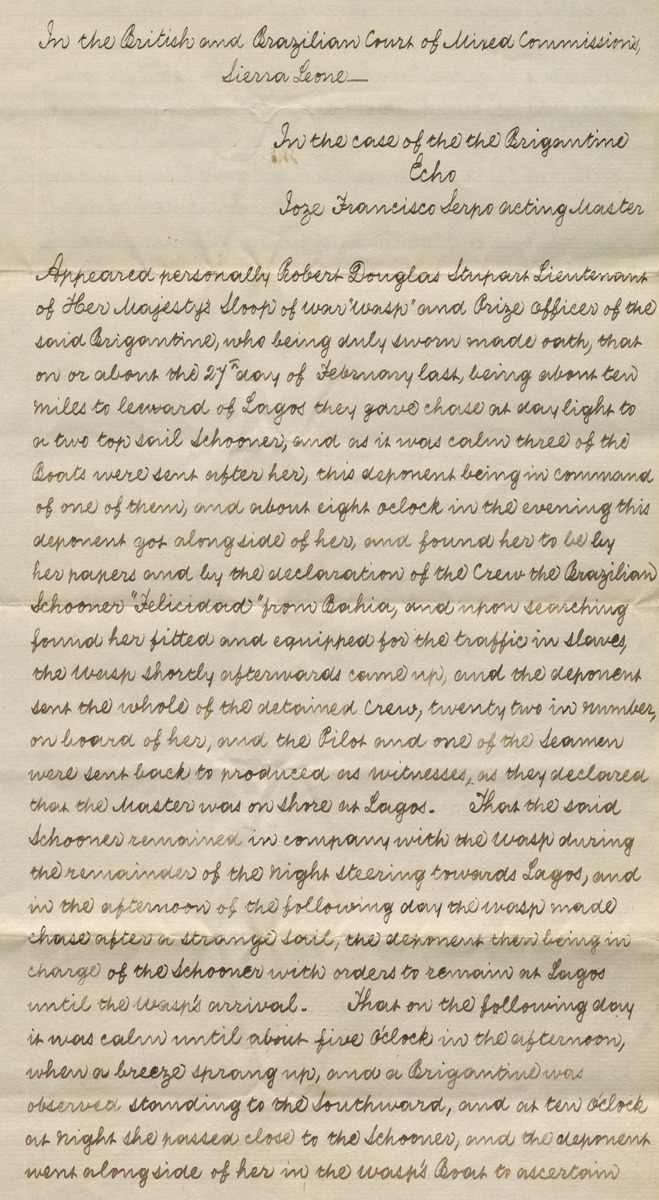 This hand-written affidavit to the British and Brazilian Court of Mixed Commissions in Sierra Leone was made by Lieutenant R. D. Stupart of the British Royal Navy’s West Africa Squadron. The report outlines the capture of the Echo, an American-built slave ship, which was caught transporting slaves from Lagos to Brazil in April 1845. Stupart and the crew of the HMS Wasp took the Echo to Sierra Leone, where the crew was prosecuted and the 412 people aboard were emancipated.  Between 1808 and 1860, the West Africa Squadron captured over 1600 ships involved in the slave trade and emancipated 150,000 Africans who were being transported to the United States, the Caribbean, and South America.

This incomplete document records the resolutions of the newly formed Anti-Slavery Society of Canada.  This Society was established on 26 February 1851 at Toronto City Hall (now St. Lawrence Hall), and it was likely at this inaugural meeting that these resolutions were set. The Anti-Slavery Society of Canada was a direct reaction to the passing of the American Fugitive Slave Bill in 1850, which permitted escaped slaves to be pursued and apprehended in any American state, even northern states where slavery had been abolished. It was this law that spurred tens of thousands of African-Americans to flee to Canada. The Society acknowledged this in their second resolution which emphasized that this law 'grievously aggravated […] the best interests of man, as endowed by our Great Creator'.

The Society’s executive was founded by prominent Canadians, both Black and white, including Wilson Ruffin Abbott, a local businessman and father of the first African-Canadian doctor, Anderson Ruffin Abbott, Henry Bibb, editor of the publication Voice of the Fugitive, and Albert Beckford Jones, a London business owner who would later go on to form the London (Ontario) Anti-Slavery Society. Prominent white members included George Brown, publisher of the Globe, Rev. Michael Willis and politician Oliver Mowat.

In 1853, the Society would hire Samuel Ringgold Ward, a prominent African-American abolitionist, orator, and newspaper editor, to visit Britain to speak on the Anti-Slavery cause. Ward would raise 1,200 pounds for the cause in Britain and two years later would pen his influential, Autobiography of a Fugitive Negro: His Anti-Slavery Labours in the United States, Canada and England, which would recount his work for the society in Canada and England.

A complete version of the constitution, resolutions, and bye-laws of the Society would be published by George Brown in 1851. This broadsheet, which contains identical resolutions, likely pre-dates this official document of the Society. 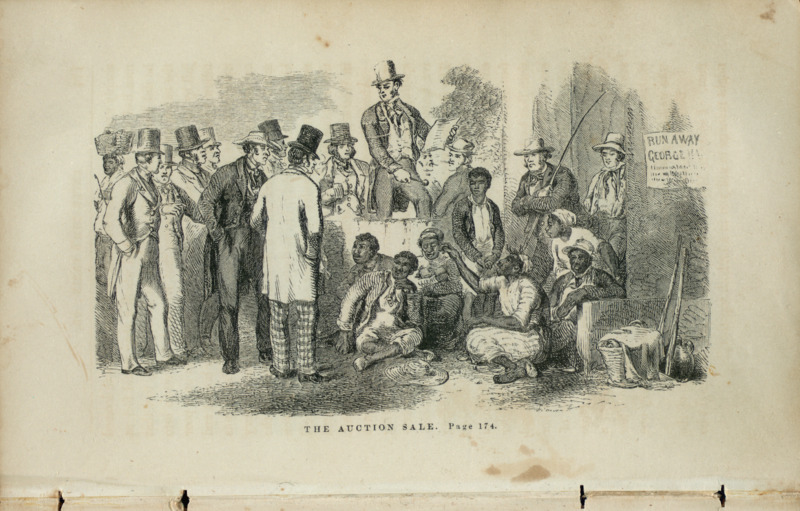 Harriet Beecher Stowe’s Uncle Tom's Cabin was originally published in serial form in the abolitionist periodical The National Era. Intended to appear for only a few weeks, the novel proved so popular that the publisher extended it to a forty-week run. The complete work was released in book form in the United States in March 1852, with the first Canadian edition, featured here, appearing later the same year. Centering on the character of the enslaved Uncle Tom, the novel was inspired by the Rev. Josiah Henson’s The Life of Josiah Henson, Formerly a Slave, Now an Inhabitant of Canada, as Narrated by Himself (1849). Uncle Tom's Cabin was influential in promoting the abolitionist cause, but has also been criticized for perpetuating racial stereotypes. 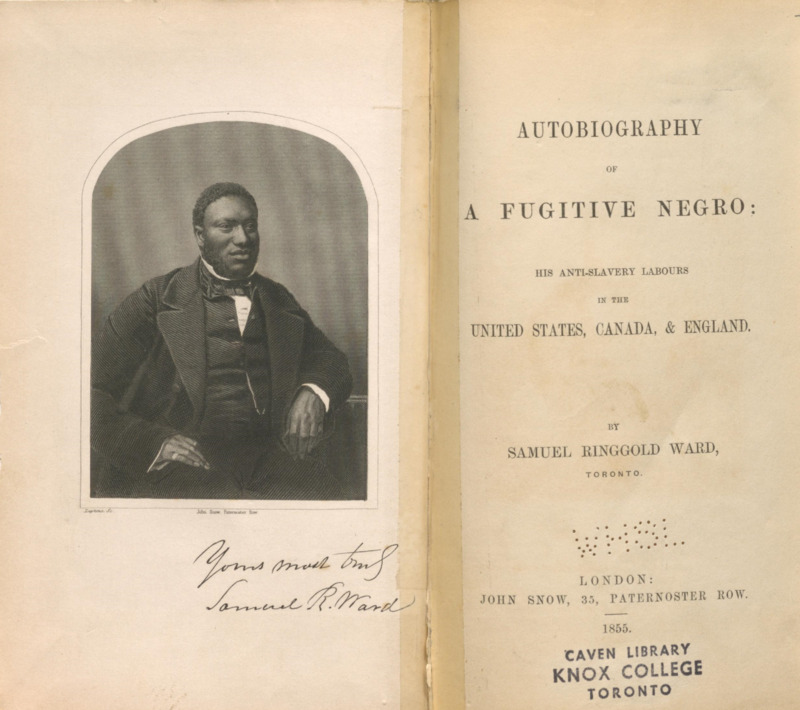 Samuel Ringgold Ward was born into slavery in 1817 in Maryland and his family escaped to freedom in New York State in the 1820s. A pastor and a teacher, Ringgold fled to Toronto to avoid arrest for his involvement in a fugitive slave rescue case. In Canada, where many escaped slaves from the United States were arriving in the 1850s, he co-founded The Provincial Freeman newspaper. He also traveled to Britain to raise funds for the Anti-Slavery Society of Canada. 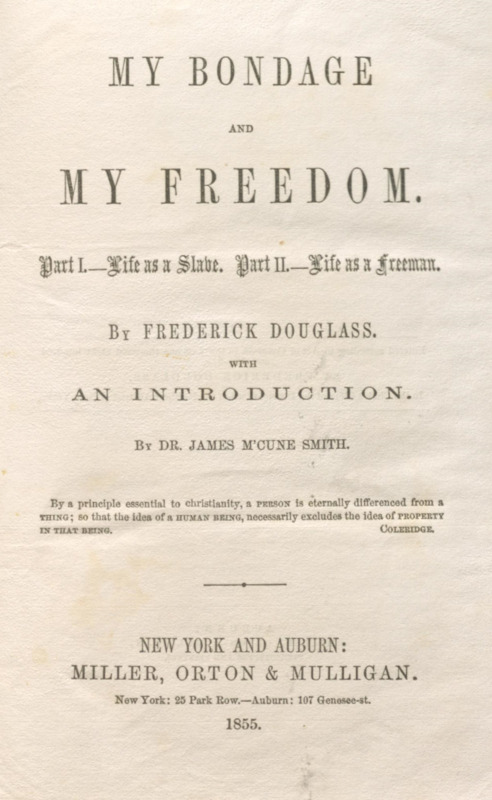 Frederick Douglass was an American abolitionist, former slave, preacher, statesman, and author who became one of the key leaders of the abolition movement. Born into slavery, Douglass escaped from Maryland and moved to Massachusetts in 1838. He undertook extensive speaking tours across the United States and Europe, often selling copies of his autobiographies at the events. As his profile grew, he wrote updated autobiographies (My Bondage and My Freedom being the second) and was consulted by Abraham Lincoln during the Civil War. After the war, Douglass served as President of the Freedmen’s Savings Bank, Consul-General to Haiti, Chargé d’Affaires for the Dominican Republic, and United States Marshal for the District of Columbia. This autobiography’s introduction was written by James McCune Smith, an abolitionist and the first African American to hold a medical degree. 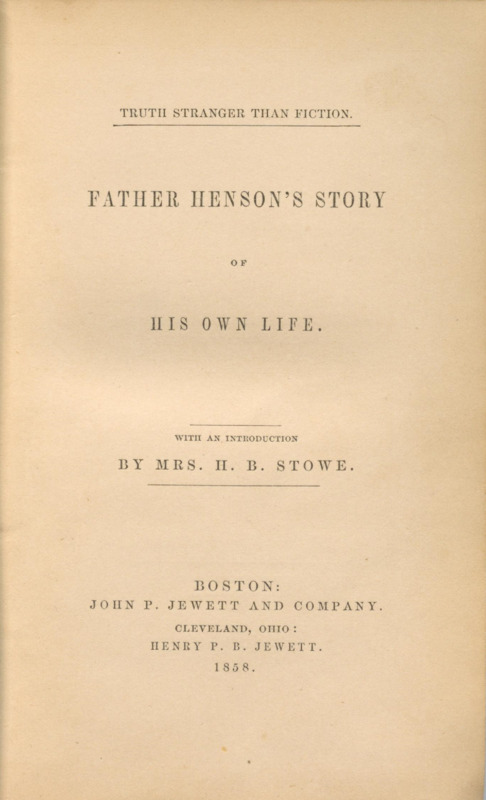 The Rev. Josiah Henson was a fugitive slave, abolitionist, and preacher.  Truth Stranger Than Fiction , which included an introduction by Harriett Beecher Stowe, was an expanded and revised second edition of his autobiography. The first edition, The Life of Josiah Henson, Formerly a Slave, Now an Inhabitant of Canada, as Narrated by Himself was originally published in 1849 and had been the inspiration for Harriet Beecher Stowe’s Uncle Tom’s Cabin, or, Life Among the Lowly (1852). Henson escaped slavery in Maryland with his wife and four children in 1830, reaching what is now Ontario on 29 October of that year. Along with other anti-slavery activists, Henson purchased 200 acres of land near the Dawn Settlement (now Dresden, Ontario). The settlement’s British-American Institute would train hundreds of escaped slaves for careers in industry until its closing in 1868. Henson would publish three autobiographies in his lifetime as interest in him grew and would serve as a key figure in Canada’s anti-slavery campaign.