Case XI: Reformation and the Arts

Iconoclasm is, unfortunately, one of the most regrettable legacies of the Protestant Reformation. The visual arts were among the first to suffer as zealots in the British Isles, the Netherlands, and the Swiss Confederacy destroyed statues, whitewashed frescos, and smashed stained glass windows in an effort to be faithful to the commandment ‘Thou shalt not make graven images.’ While such wanton destruction remains lamentable for Western culture, the era was not bereft of all art, and indeed saw the birth of new forms in almost all religious traditions. Secular portrait art, for example, flourished in both Protestant and Catholic territories as the Renaissance spirit spread across the Continent, and carved funerary monuments in newly reformed churches began to replace the images of saints. Changes to the liturgy saw the introduction of a cappella congregational psalm-singing in Scotland, the Netherlands, and the Swiss cantons, while in the Anglican Communion a new form of plainchant, introduced by John Merbecke (ca. 1510-ca. 1585), would establish a musical tradition that lasts to the present day. The Council of Trent also decreed changes to service music that saw the emergence of such polyphonic giants as Palestrina, Vittoria, and Lassus. Metaphysical poetry emerged from the pens of Counter-Reformation saints and Anglican divines alike. The world of Catholic architecture was energized by the appearance of the Baroque, an aesthetic that was eventually embraced by Protestant London, Bern, and Stockholm. In this era of transition, the printer’s arts also served the development of European culture, to which these few examples bear witness. 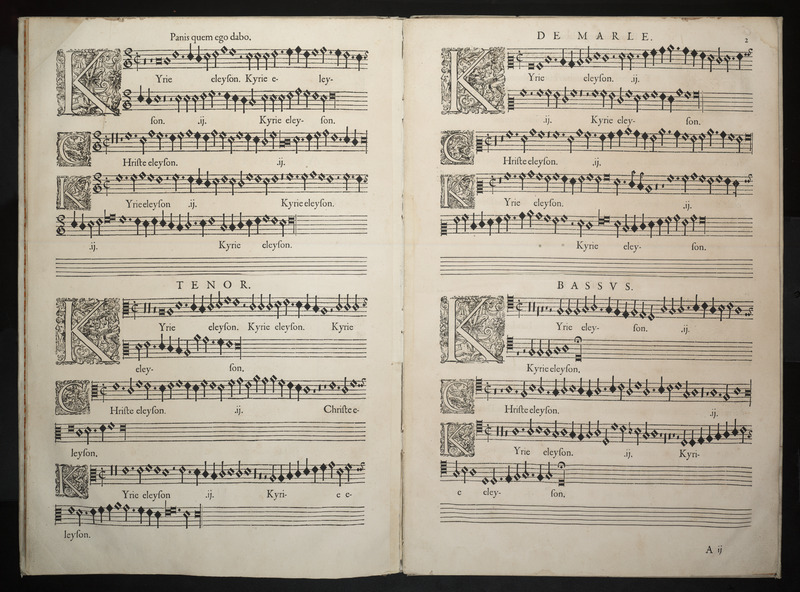 Nicolas de Marle was choirmaster of the cathedral of Notre-Dame de Noyon in Picardy in 1568, the same church in which the reformer John Calvin had been baptized almost sixty years earlier. This musical Mass setting is known as a ‘parody’ or ‘imitation Mass’: one that uses a fragment of pre-existing music, such as a popular song or a motet, as the basis for its own melodic structure. Parody Masses, based on secular songs, were condemned by the Council of Trent in 1562. Many composers, however, continued to incorporate imitation into their Mass settings for centuries, with Palestrina alone providing more than fifty examples. While Italian and French churches mostly complied with Trent’s decree, it was largely ignored in the Germanic territories, where the new Lutheran forms of worship were employing popular music within the liturgy. 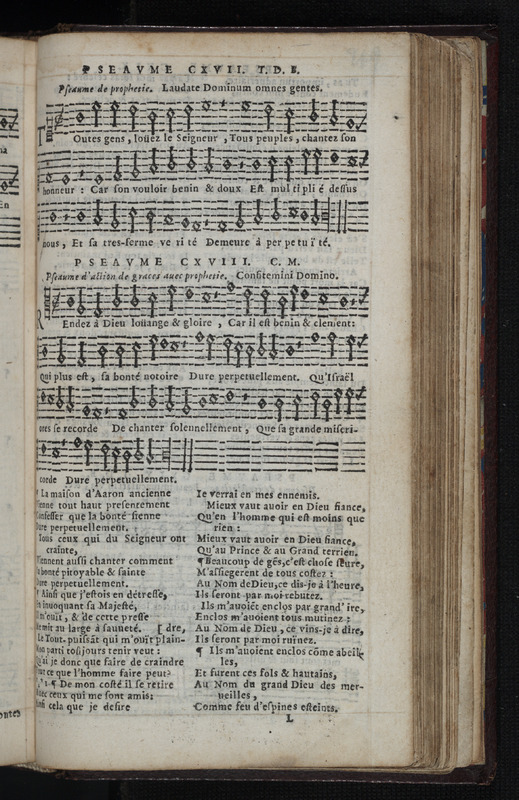 Marot’s French translation of the Psalms was popular with Protestants, especially after his paraphrases were set to music by the Huguenots Claude Goudimel (who was killed during the St Bartholomew’s Day Massacre of 1572) and Claude le Jeune. Goudimel composed over three hundred musical settings for the singing of the Psalms in Calvinist worship, seventy of which were in the parody style. The first volume of Calvin’s ‘Geneva Psalter’ appeared in 1539, and included twelve of Marot’s paraphrases together with six written by Calvin himself. In time, Calvin’s collaborator Théodore Beza added his own translations to the growing Psalter and, although Calvin’s translations eventually disappeared from the books, Marot’s and Beza’s were reproduced in numerous editions over the centuries. Paraphrase hymns such as Rendez à Dieu (Ps. 118), displayed here, remain popular with congregations throughout the world. 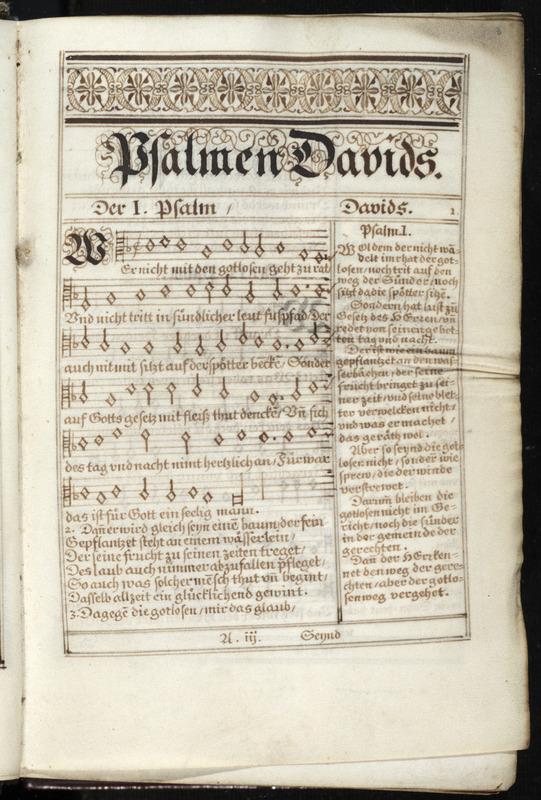 The congregational singing of hymns, which had become common practice in the late medieval Germanic church, was strongly reinforced by the incorporation of Luther’s translation of the Psalms in public worship. By the middle of the sixteenth century, memorable French Calvinist Psalter tunes had become popular, but since relations between the two main Protestant groups were strained at the time, the tunes were rejected in many regions. Captivated by their beautiful melodies, the Lutheran humanist Ambrosius Lobwasser decided to translate Marot’s text into German, and retain the fashionable French airs. The new translation was broadly accepted in Saxony and Switzerland, and eventually saw forty editions between 1586 and 1694. This manuscript copy, transcribed by André Wecheln, the first Postmaster General of Sweden, is unique for its inclusion of Luther’s Psalm translations as well as Lobwasser’s. 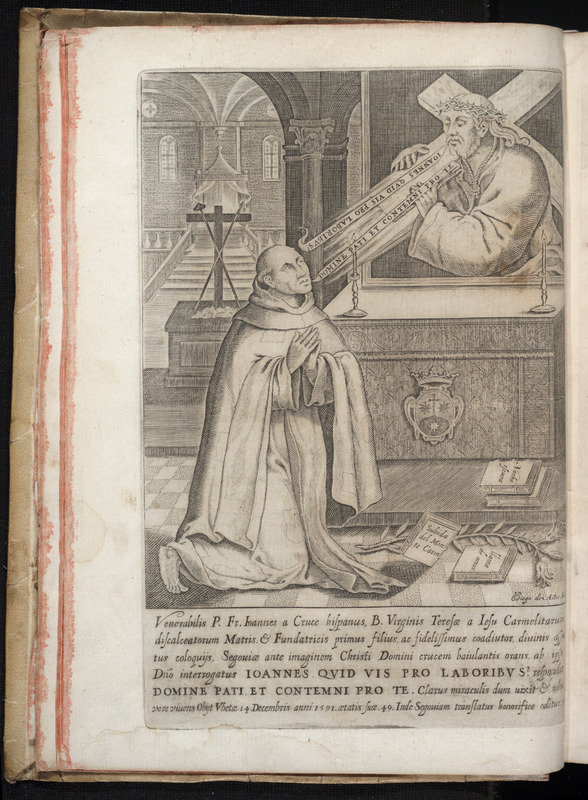 Like Teresa of Avila, John of the Cross worked to reform his branch of the Carmelite order. He was accused of being a crypto-Lutheran for his efforts and was held captive for nine months beginning in December 1577, flogged by his confrères daily. It was in that airless cell, however, that he conceived the mystical poetry first published in this book that would inspire generations. They remain among the greatest triumphs of Counter-Reformation art, and speak forcefully of a renewed religion of the heart, beautifully expressed in his most famous poem ‘Noche oscura’ in which John draws his inspiration both from secular romance as well as the Song of Songs. The particularly fine portrait of the saint presenting his writings to Christ was executed by the Toledo engraver, Diego Astor, who also served in the Royal Mint. 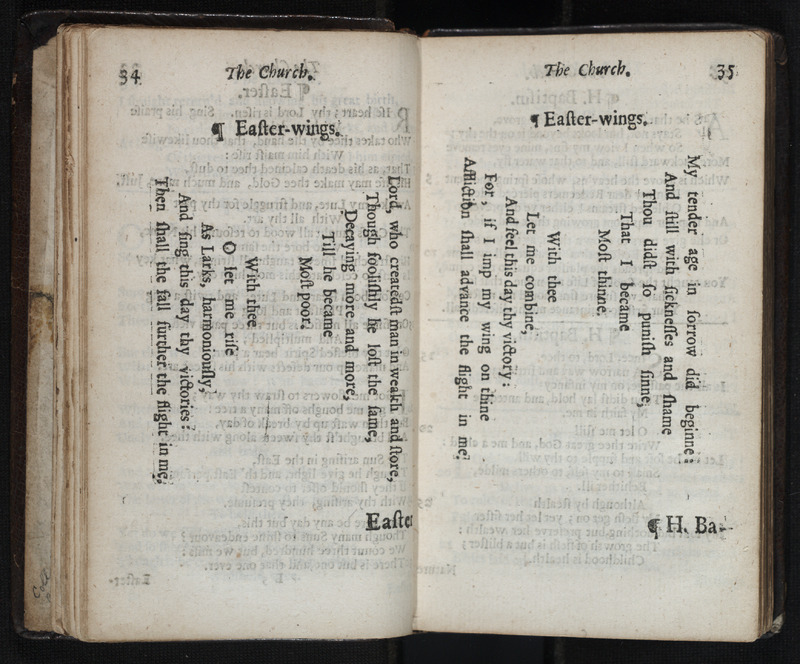 Herbert’s gift for words was such that it was unclear at times whether he was destined for the service of the state or the altar. In the end, he declared for the church, and became one of the greatest of Anglican luminaries – a priest, poet, and musician. This collection, his greatest work, includes two intriguing ‘shape’ or ‘pattern poems’: ‘Easter Wings’ and ‘The Altar.’  The words are arranged in such a way that the typography is at least as important in conveying meaning as the words themselves. For mystical poets like Herbert the physical form of letters communicated a spiritual significance beyond their linguistic meaning, just as the case had been for many ancient Hebrew authors. Their dramatic layout, therefore, is not merely whimsical; it forms part of the intellectual framework behind their texts. Besides their mystical associations, Herbert’s shape poetry may also be seen as an ancestor to the concrete poetry of the twentieth and twenty-first centuries. 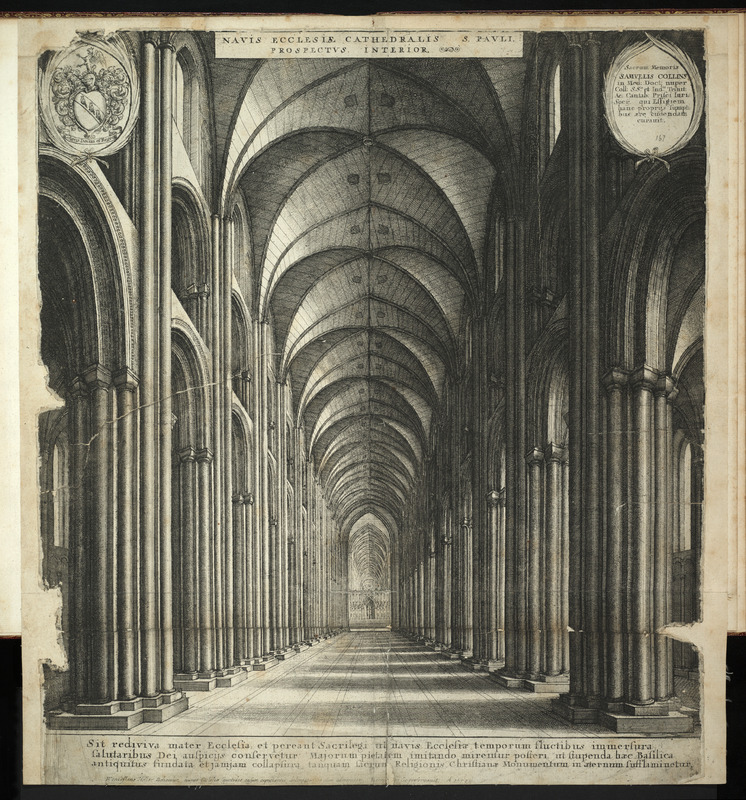 Dugdale’s book is valued today for its preservation of images of a magnificent building that was destroyed by the Great Fire that would occur eight years after it was printed. In its own day, however, it was intended as an urgent appeal against the iconoclasm of the English Civil War and the subsequent Puritan ascendancy, which had contributed to the decay of the Gothic cathedral. In 1643, the building was partitioned, with the eastern end of the choir walled off as a preaching space, while horses were stabled in the church’s vast nave. By the time Hollar, arguably the greatest engraver of the seventeenth century, made his etchings, a side chapel was occupied by a glass blower, part of the crypt a wine merchant’s cellar, bakers had set up ovens between the buttresses, and part of the south transept had collapsed. Displayed is one of Hollar’s greatest masterpieces, the impressive tunnel perspective of the old cathedral’s nave. 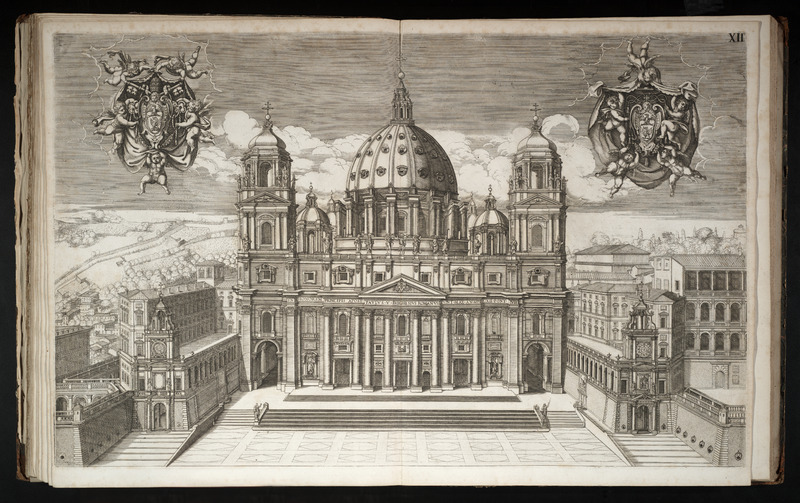 This last book records the magnificent architecture of St Peter’s Basilica in Rome, the church whose initial construction was financed, at least in part, through the sale of indulgences. Costaguti was papal major domo under Pope Paul V and so it may be assumed that his book reflects contemporary papal opinion on the building project. He compiled it specifically to record the immense difficulties faced while constructing the great portico of the Basilica. The engravings by Martino Ferrabosco record, not only the appearance of St Peter’s as it could be seen in the first quarter of the seventeenth century, but also his suggestions for what the building could become. Displayed is the artist’s rendering of his ideas for the completion of the façade, piazza, and towers of St Peter’s.