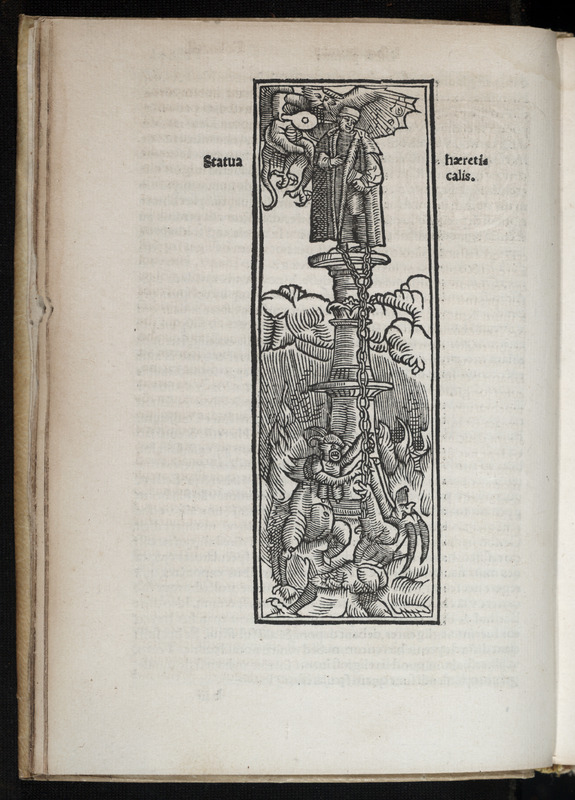 This catalogue of heretics was compiled and published by the Dominican theologian and controversialist Bernard of Luxemburg whose goal here was to associate modern heresies, like Luther’s, with ancient ones to demonstrate that there was nothing new under the theological sun. The woodcut depicts ‘heresy’: a man standing on a pillar, held fast by two demons while another demon flies about, trumpeting heresy into his ear. Bernard’s catalogue influenced later Indexes, such as the one included by Sebastian Franck in his Chronica und Geschichtbibel of 1531. In time individual dioceses would develop similar printed lists, eventually culminating in the Indexes of Forbidden Books first issued by Rome in 1557. 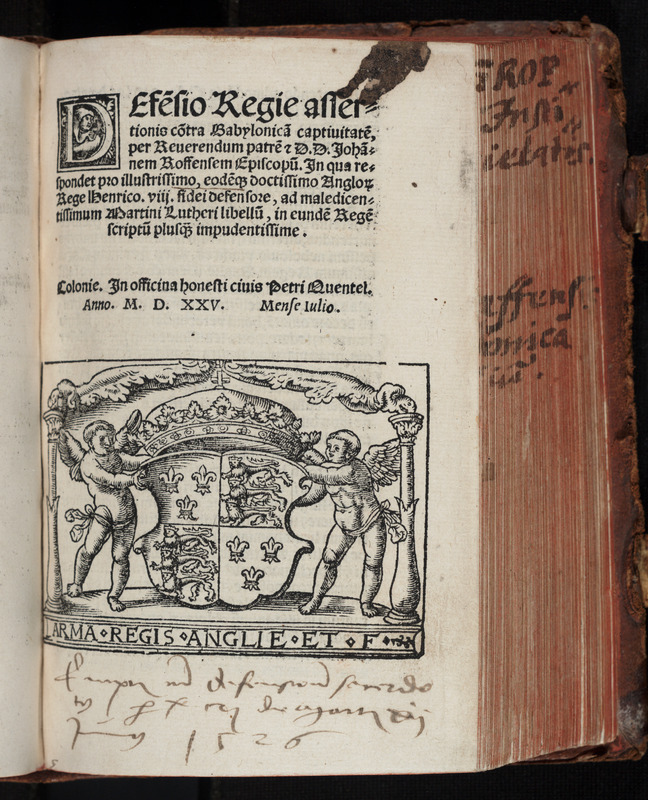 In 1525, rumours spread suggesting that King Henry VIII was sympathetic to Lutheran teaching, despite the fact that he had co-written the Assertio septem sacramentum. That treatise had criticized Luther’s opposition to indulgences and denounced his reinterpretation of the sacraments, as well as the anti-papal tone of the De captivitate Babylonica of 1520 (case two). Luther responded with Contra Henricum regem Angliae in 1522. In this treatise, Fisher defends the King’s orthodoxy, maintaining that the onus is on the innovator of doctrine, Luther, to defend his teaching, rather than on those like Henry who have remained faithful to tradition. Fisher, one of the staunchest defenders of Henry’s marriage to Catherine of Aragon, was executed on Tower Hill on 22 June 1535. 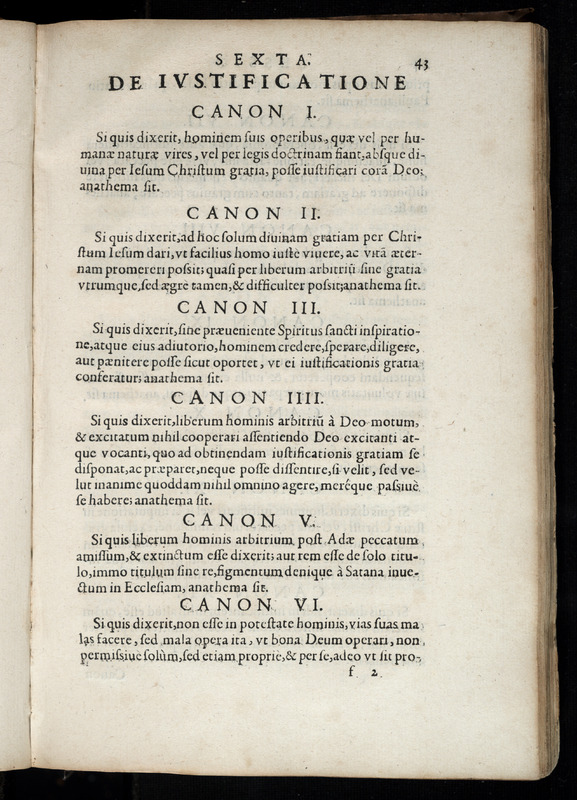 More than a generation passed before the Roman Catholic hierarchy formally gathered to respond to the Protestant Reformation that had begun in 1517. The final decrees and canons of the Council of Trent (which met sporadically in the northern Italian city of Trento from 1545 to 1563) and the Tridentine culture to which they gave birth, left an indelible impression on Catholicism well into the contemporary era. As the Tridentine scholar John O’Malley observed, it was Martin Luther (who died one year into the first session) who had really set the agenda for the assembly. The Council’s greatest failure, however, was its inability to heal the rupture of the Western Church. Displayed are the Council’s canons on the vexed question of justification.

One of the most immediate Catholic responses to the Reformation was to control the dissemination of printed information through censorship. Local indexes had been in force throughout Europe for several centuries, but the first authorized Index of Forbidden Books for use throughout the Catholic world was issued by Pope Paul IV in 1559. Support for the Index, however, was not universal among Roman Catholics. Shortly after the first edition appeared, the Jesuit priest Peter Canisius (1521-1597), who was canonized a saint in 1925, wrote to the General of his order, Diego Lainez, saying that the Index was both ‘intolerable’ and a ‘scandal.’ Nevertheless, it was published and updated regularly, with the last edition issued in 1948. 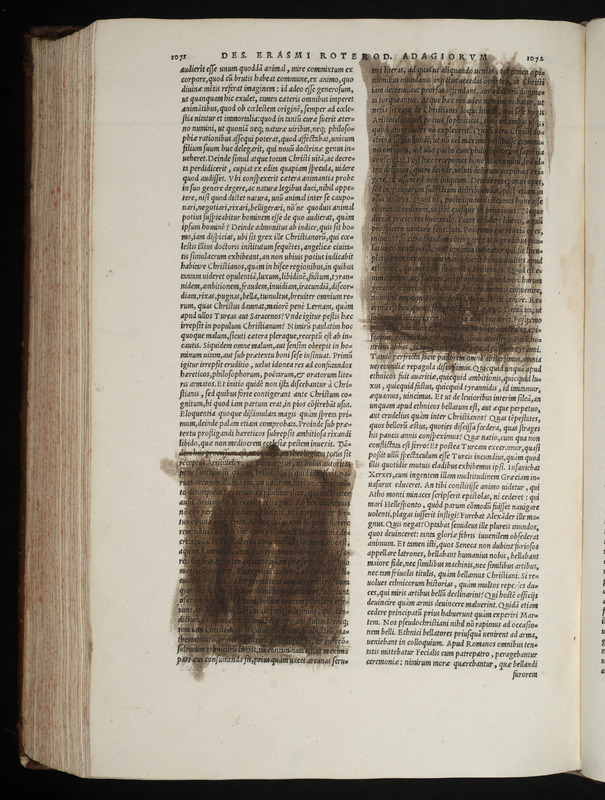 This copy of Erasmus’s Adages is an excellent example of compliance with the requirements of the Roman Index librorum expurgatorum, the index that specified which offending passages of a book had to be censored if the text were to remain in circulation in the Catholic world. The Adages is a collection of ancient proverbs combined with Erasmus’s commentary. The censored passage on display contains Erasmus’s reflection on Pindar’s proverb, ‘War is sweet to those who have never experienced it.’ In the blotted sections, Erasmus skewers Aristotle’s contribution to the ‘Just War Theory’, and the Scholastic philosophy that underpinned much of the teaching of the late medieval church. 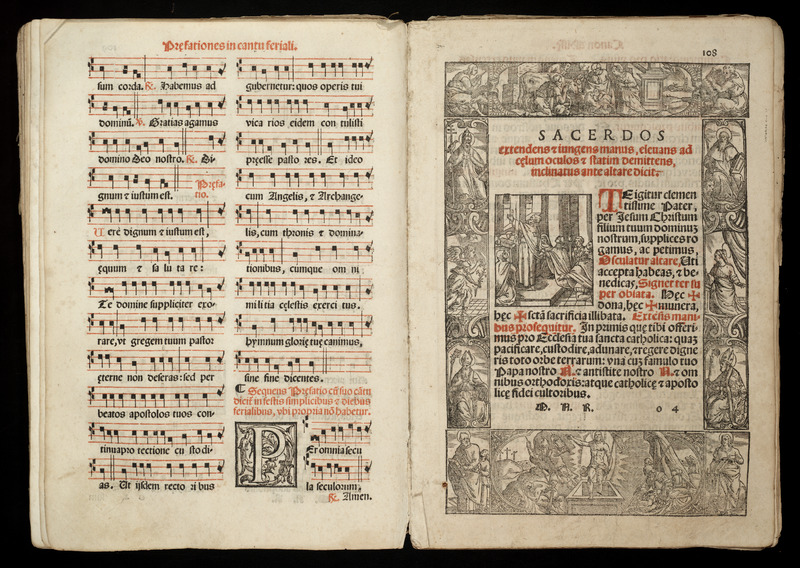 One of the greatest legacies of the Council of Trent was the reform and standardization of the celebration of Mass. In 1570, the Tridentine Mass of Pope Pius V, recorded in these pages, became the official liturgy of the Roman Rite and remained in continuous use until 1965. The universal application of Trent’s liturgical reforms would have been impossible were it not for the invention of the printing press that sped copies of the new Missal and its rites all over the Catholic world, creating a single, unified act of worship in place of the diversity of customs found in the late Middle Ages. 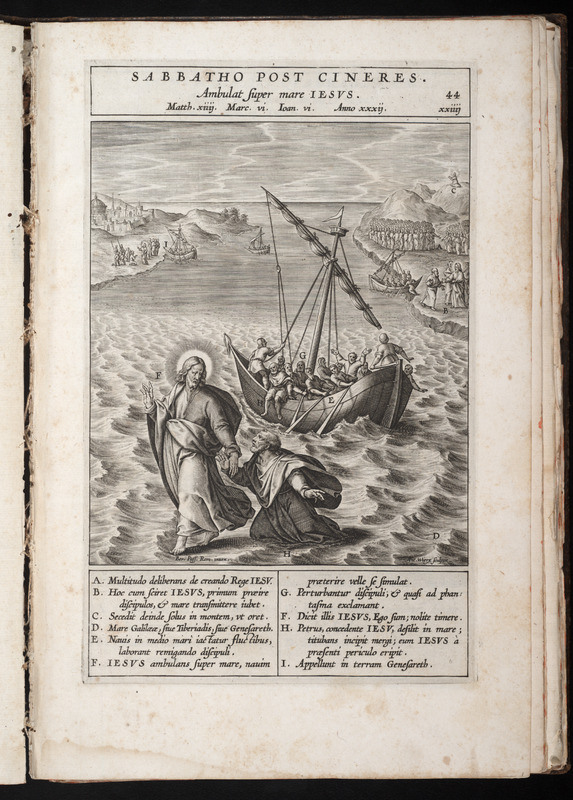 Gerónimo Nadal was one the first ten members of the Jesuit order which was given papal approbation in September of 1540. Ignatius asked Nadal to design this book, containing 153 engraved scenes from the Gospels, as an educational tool for Jesuit missionaries. It was immensely popular, in part because it used the relatively new technique of ‘perspective drawing’ which rendered the stories more realistic and accessible to Renaissance readers. It also became an effective tool for evangelization throughout the Jesuit missions, and was particularly influential in the development of Spanish colonial art both in South America and Asia. 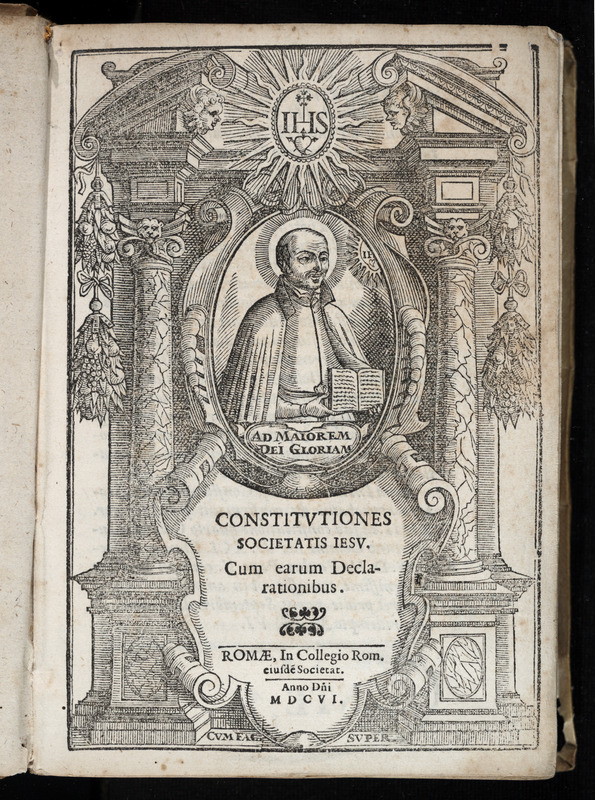 In many ways, the members of the Society of Jesus (Jesuits) were the foot soldiers in Catholicism’s war with Protestantism. In the mid-1530s, Ignatius began drafting the Jesuit Constitutiones, a project that would continue for more than a decade and not receive final approval until 1558. It establishes the rigorous process associated with Jesuit spiritual formation and a unique governance structure for the Society, with a Superior General elected for life. The woodcut title-page border bears the portrait of Ignatius sporting a halo, a somewhat presumptuous depiction given that he was not even beatified until three years after the appearance of this publication.