Case IX: Effects of the Reformation in North America

The tumult that swept across Europe in the sixteenth and seventeenth centuries was not confined to the borders of the Continent and the British Isles. Persecution and disenfranchisement caused many Protestants, and even some Catholics, to look to the New World as the ideal place to build their New Jerusalem. The intolerance of the Old World, however, was often reignited as new settlers from various Christian denominations arrived at established centres, like Boston, and were forced out, moving on to found new communities, like Providence, Rhode Island where they might worship and live in relative peace.

In the New World, interest in missionary activity was renewed by the decrees of the Council of Trent, after which Roman Catholics began exporting their religious and social institutions from Spain to Mexico in the sixteenth century, and then from France to the Québec, Acadian, and Louisiana territories in the seventeenth. Their aim was not only to bring spiritual comfort to colonists, but also to indoctrinate the Indigenous peoples living in what were now deemed parts of their new empires.

One of the consequences of this gathering of so many disaffected believers in North America, however, was that it led to further religious splintering among Protestants, with such homegrown denominational varieties appearing over time as Seventh-Day Adventism, Mormonism, and Christian Science. The printing press continued to play an essential role in stimulating the European imagination with regards to the possibilities for religious expansion and indoctrination in a New World. It also helped to spread the doctrines of new movements that were truly North American in character. 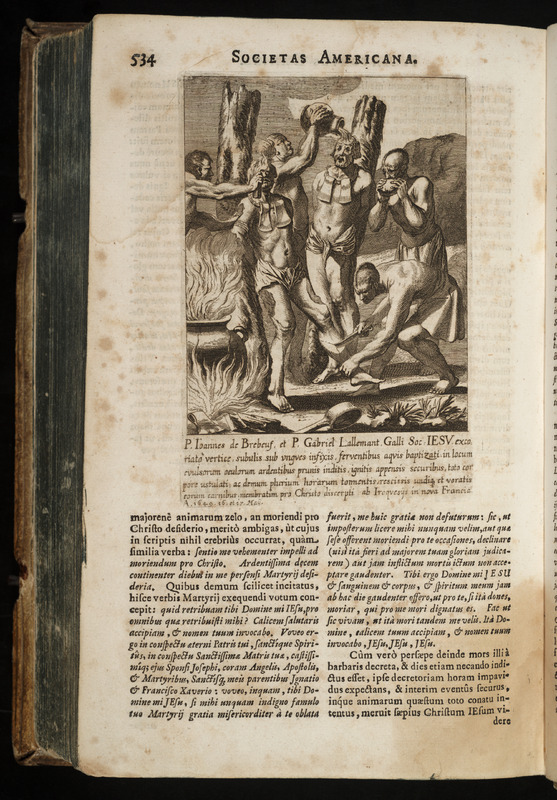 The translated title of this book aptly summarizes its content: ‘The Society of Jesus, Militant even unto the Shedding of Blood and Life.’ The Jesuit martyrdoms around the globe in the sixteenth and seventeenth centuries were considered signs both of the Church’s catholicity, as well as the validity of its traditions in a fractured Christendom. While the original drawings by Karel Škréta, engraved by Melchior Küsel, communicate a quiet dignity, they also record the violent encounters between Jesuits and the Indigenous peoples of the Americas and Asia which reinforced the Eurocentric character of the Counter-Reformation Church, and the perception of non-Europeans as savages. Displayed is the martyrdom of Jean de Brebeuf and his companion Gabriel Lalemant in Huronia. 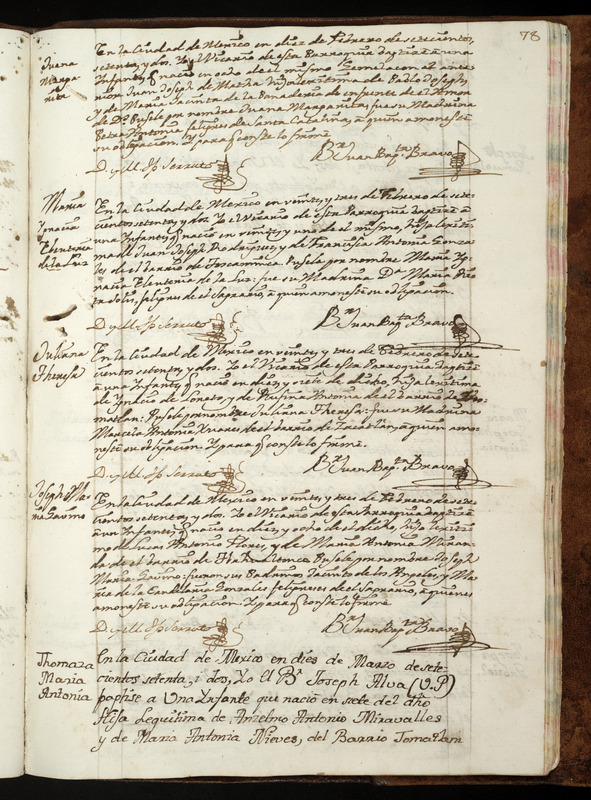 The Council of Trent committed the Catholic Church to the establishment of missions beyond the bounds of Europe, notably in the colonies belonging to France, Portugal, and Spain, with church and state reinforcing each other’s authority in the territories. This Spanish manuscript records the baptisms of Indigenous people from the parish of San Sebastián Mártir in Mexico City between the years 1768 and 1775. It is typical of those kept by the Mexican church at this time, when it was common practice to retain three separate registers for the three cultural groups in the kingdom: Spaniards, mulattos, and as in this case, ‘Indians’. Such ethnic stratification, known as the casta, would help to reinforce European ascendancy in the New World. 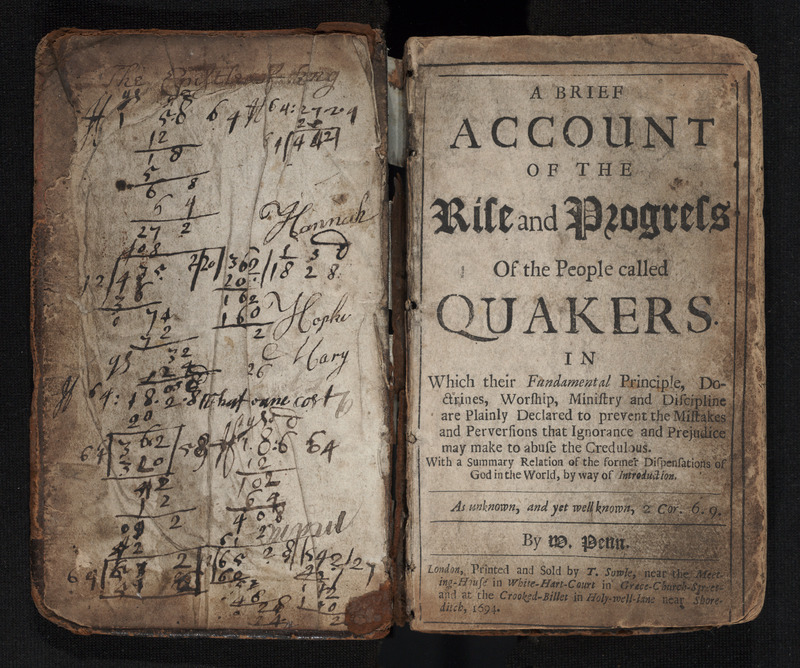 ‘The Society of Friends’ or Quakers, emerged during the English Civil War. The fundamental tenet of the group was that every believer possessed the ‘inward light of divinity’, expressing itself practically in their radical sense of equality. For numerous reasons, including their refusal to take oaths or join the military, they were frequently persecuted, and many fled to the New World, where harassment continued. In 1681, the Quaker William Penn was given the territory that would become Pennsylvania – a ‘holy experiment’ where no state religion would be officially established, and where tolerance was almost fully enshrined. Penn’s Brief Account is one of the three key texts, together with George Fox’s Journal and Barclay’s Apology, essential to understanding the early history of Quakerism. 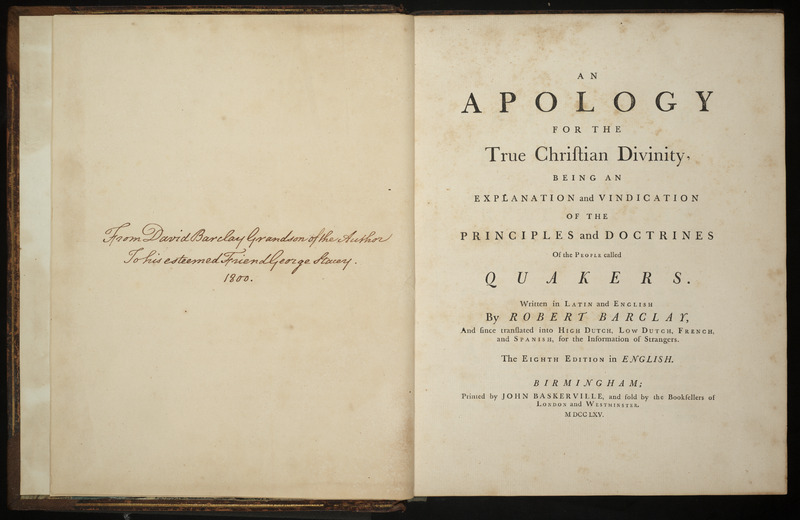 Robert Barclay (1648-1690). An Apology for the True Christian Divinity, being an Explanation and Vindication of the Principles and Doctrines of the People called Quakers. Birmingham: John Baskerville, 1765.

Quakerism was about thirty years old when the Scottish convert Robert Barclay first published the English edition of this text in 1678. Barclay had been trained in theology in France by his uncle, a Catholic priest, and so this work serves as a bridge between theological concepts prevalent at the end of the seventeenth century in mainstream Christianity, and the vocabulary and concepts employed by Quakers themselves. It is still considered the definitive statement about of the tenets of the new religion. The Fisher copy is the eighth edition, considered the finest impression owing to its having been issued by the press of John Baskerville, the preeminent printer of his day. It formerly belonged to the author’s grandson, David Barclay (1729-1809), one of the founders of the famous bank bearing the family name. 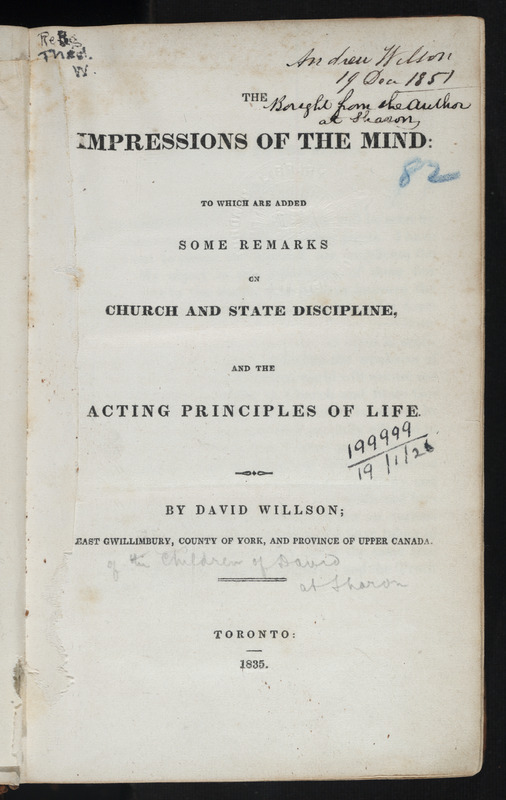 David Willson (1778-1866). The Impressions of the Mind, to which are added some Remarks on Church and State Discipline, and the Acting Principles of Life. Toronto: J.H. Lawrence, 1835.

The Quakers splintered into several groups during the nineteenth century, most prominently in Canada under the leadership of David Willson. An American convert, Willson joined the Yonge Street Meeting of the Society of Friends (in present-day Newmarket) in 1805. By 1812, however, he began to experience dogmatic and liturgical differences with the Quakers, favouring, for example, more enthusiastic forms of worship. He and several dozen other schismatics established the ‘Children of Peace’ at Sharon where they built their famous temple. His ideas are best expressed in this book, based on sermons preached in the temple. His support of reform-minded politicians cast suspicion on the community during the Rebellion of 1837, when the temple was threatened with destruction. 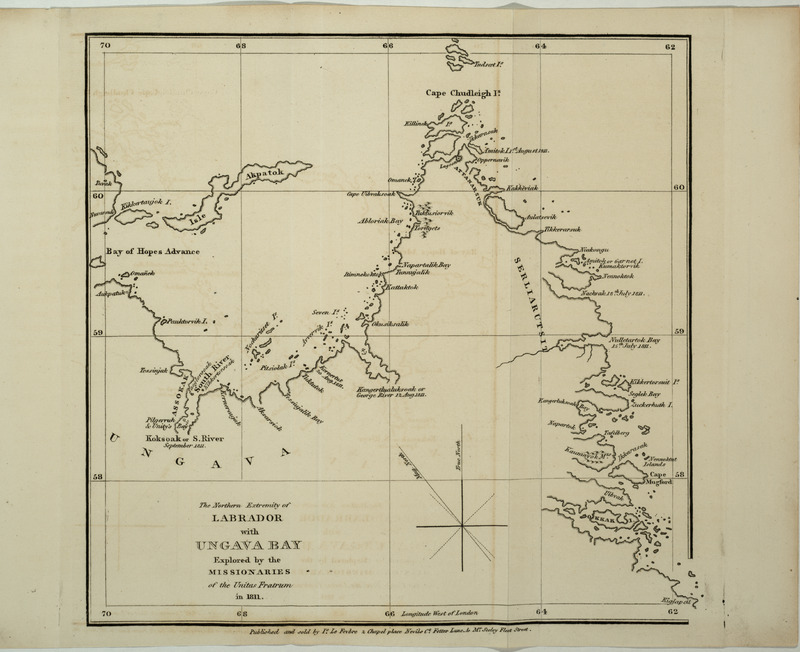 Benjamin Gottlieb Kohlmeister (1750-1844) and George Kmoch (1770-1857). Journal of a Voyage from Okkak, on the Coast of Labrador, to Ungava Bay … Undertaken to Explore the Coast, and Visit the Esquimaux in that Unknown Region. London: W. McDowall, for the Brethren's Society for the Furtherance of the Gospel among the Heathen, 1814.

The Moravians are among the oldest of the Protestant denominations, tracing their origins to the Hussites of the fifteenth century. In this book, German missionaries Kohlmeister and Kmoch detail their activities in Labrador, bearing witness to the utter tenacity of the Moravian missionaries in one of Canada’s most inhospitable climates. Like the Jesuit Relations, perhaps the greatest contribution of this report is its preservation of the intimate contact of Europeans with the Indigenous people of the New World before that society was forever changed. 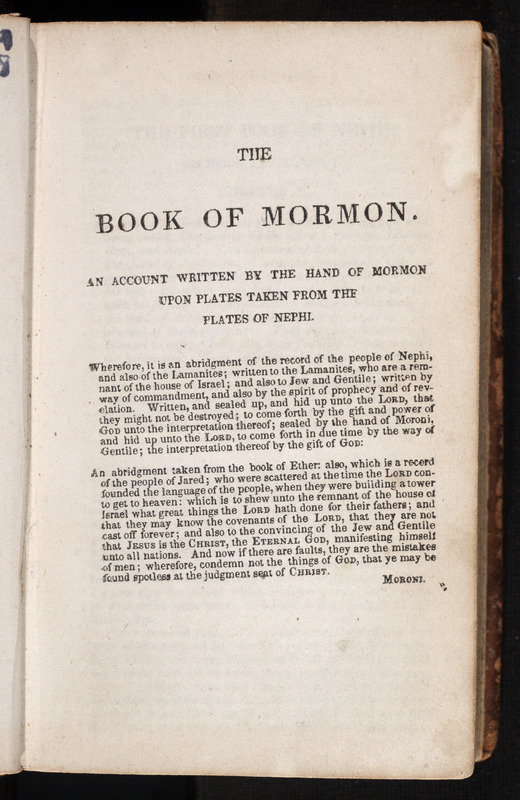 In addition to the Bible, the Book of Mormon is the principal text of the Church of Jesus Christ of Latter-day Saints. The text was registered according to Act of Congress in 1829, and five thousand copies of the first edition were printed the following year. The original publication was boycotted by mainline Protestant churches, and consequently sales of the first edition were decidedly slow. The Fisher copy is the third edition, the first to be printed from a stereotype. The Book of Mormon consistently ranks among the top ten best-selling books of all time, with more than 140 million copies recorded as sold.