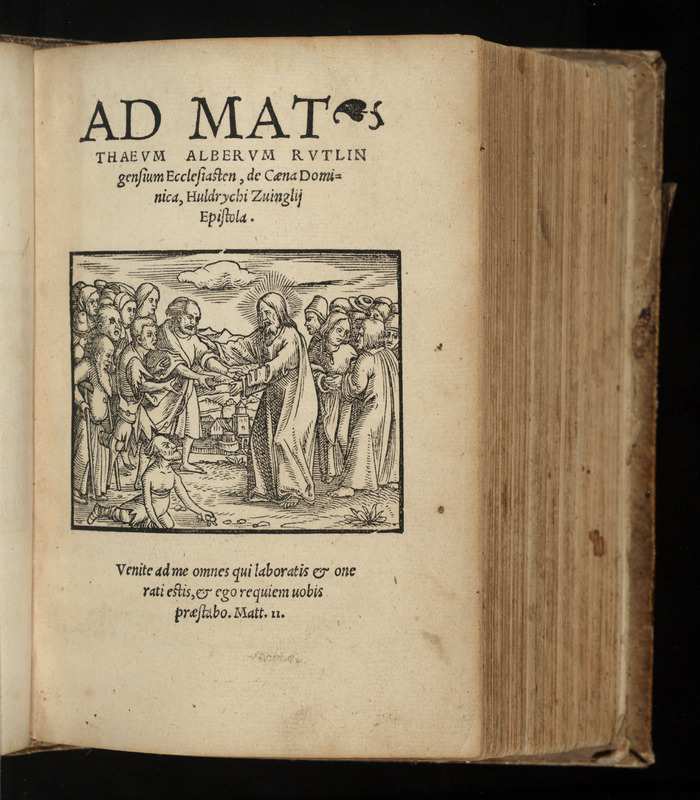 In 1519, Ulrich Zwingli was appointed pastor of Zurich’s Grossmünster from which place he engineered the reformation of his canton, as well as much of the German Swiss territory. A member of the more radical wing of the Reformation, Zwingli profoundly disagreed with Luther on several points of doctrine and practice, but particularly over the nature of the Eucharist, as expressed in this treatise. 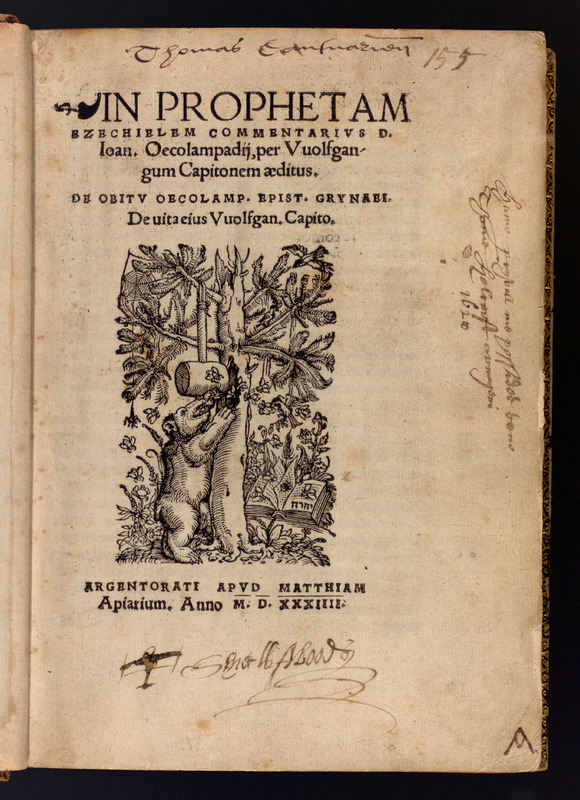 Johann Oecolampadius, who was ordained priest in 1510, is considered the apostle of the Reformation in Basel. Beginning in March of 1527 he delivered his disquisitions there on the prophet Ezekiel. John Calvin, who fled to Basel in 1535, had the highest regard for Oecolampadius’s biblical exegesis, and there is evidence that he may even have played some role in the editing of this particular text. The Fisher copy is of particular importance since it once belonged to Thomas Cranmer (1489-1556), Archbishop of Canterbury, whose mark of ownership appears on the title page. While Luther was the Protestant author most frequently found on Cranmer’s shelves, Oecolampadius’s Old Testament commentaries assumed second place. 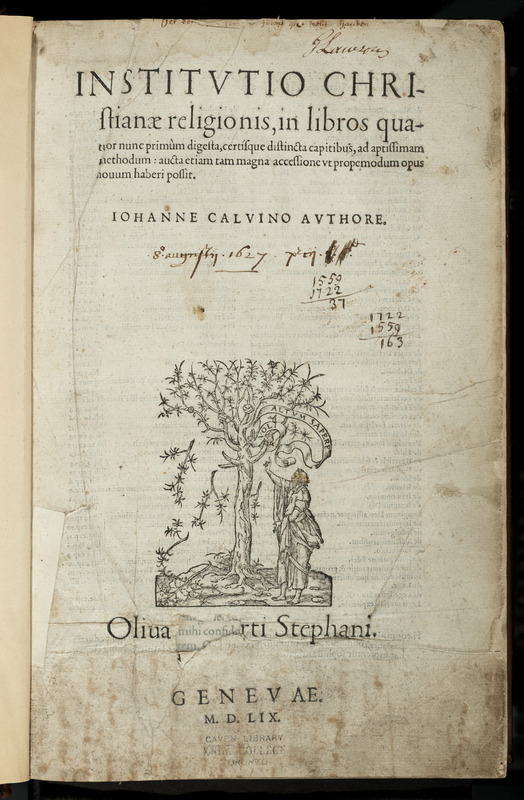 The Institutes of the Christian Religion is a summary of Calvin’s Reformed theology, and this particular 1559 edition was considered by Calvin himself to be the definitive expression of his faith. It is arguably the most important doctrinal work of the Reformed tradition. The last book issued by the great printer Robert Estienne, it is noteworthy for the fact that it represents the only time that Estienne actually identified the place of printing of his books as Geneva – an intentional omission in his earlier works to allow for their easier clandestine importation into Catholic France after the restrictions imposed by the 1551 Edict of Chateaubriand. 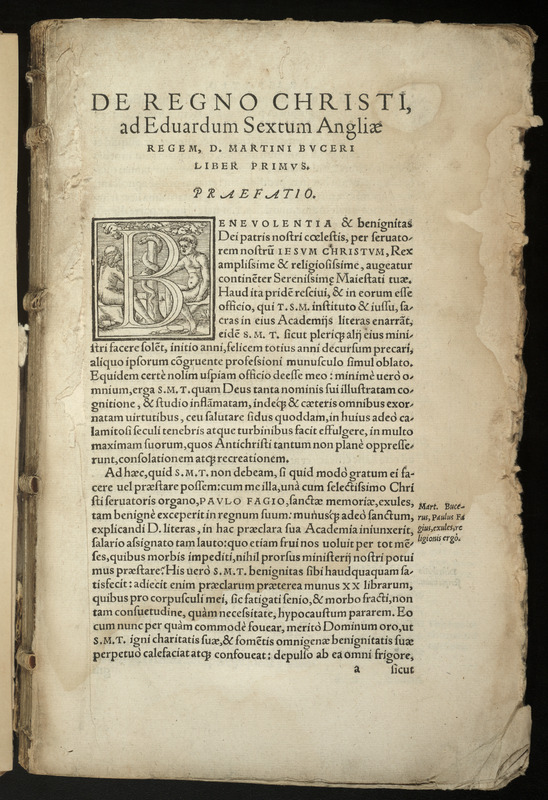 Martin Bucer established the Reformation at Strasbourg in 1523. In 1549, following the imposition of the Augsburg Interim, Bucer fled to Cambridge where he was appointed Regius Professor of Divinity. He died there in 1551. This book, the last treatise written by Bucer, was a practical proposal for the reform of the Church in England. Although it was ready for publication in 1551, it was not actually printed until 1557. Upon the accession of Queen Mary I, Bucer was posthumously condemned as a heretic. His body was disinterred from its resting place in St Mary’s Church, Cambridge and burnt. 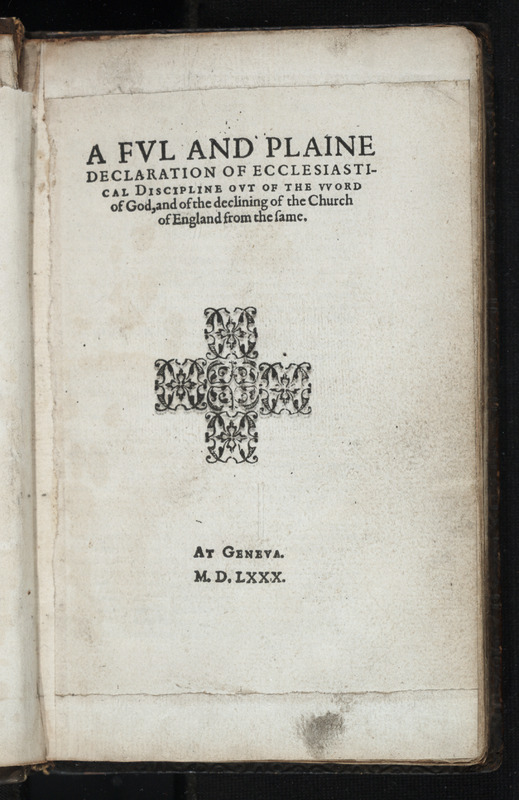 Walter Travers (1547 or 8-1635). A Fvl and Plaine Declaration of Ecclesiastical Discipline out of the VVord of God, and of the Declining of the Church of England from the Same. Geneva: [s.n.], 1580.

Travers is considered by many the father of English Presbyterianism. In 1570 he left England for Geneva where he published the first Latin edition of this text on church government. In it he rejects the idea of bishops as unbiblical, and proposed that deacons were types of elders rather than a separate clerical order. His text, which was translated into English by the Puritan Thomas Cartwright, was thrice published and each time subject to orders to seize and destroy in Britain. It has been said that his lasting achievement was to irritate Richard Hooker sufficiently that he should write the highly influential Anglican classic, Treatise on the Laws of Ecclesiastical Polity.