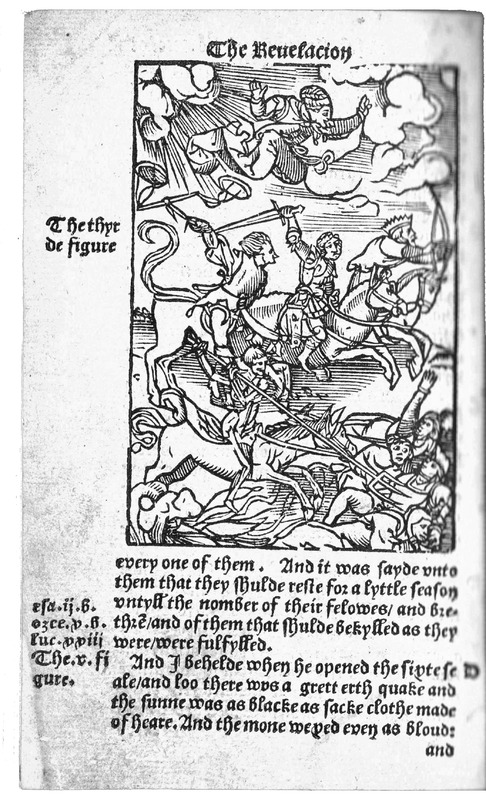 By 1524, England was the last major European country that did not have a printed vernacular edition of the Bible. Under Henry VIII only the Latin Vulgate was permitted. In 1526, William Tyndale, priest and Humanist, produced the first English New Testament at Cologne, of which only two complete copies survive.  The 1534 edition displayed here represents a careful revision of that earlier work.  The book was condemned in England, and Tyndale was arrested in Antwerp where he was working on a translation of the Hebrew Scriptures.  He was executed near Brussels.  The diminutive size of this Testament ensured that it could be hidden and saved from destruction.  Some ninety per cent of the King James Version of the New Testament was taken directly from this text. 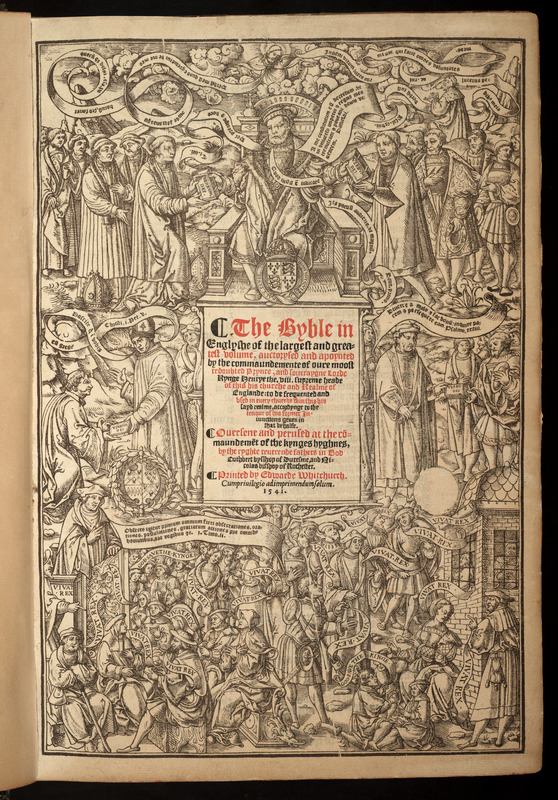 In 1538, Thomas Cromwell, Chancellor of England, commanded that every parish church should have a large copy of the English Bible available for reading and consultation by the clergy and laity alike.  The result was this massive tome, better known as ‘The Great Bible’. The pride derived from this endeavour, however, is perhaps best expressed in the Holbeinesque woodcuts that adorn the title page, depicting Henry VIII distributing the English Bible to his enraptured subjects through the auspices of Archbishop Thomas Cranmer and the soon-to-be disgraced Cromwell. Cromwell’s fall from grace is memorialized in the blank circle on the right, indicating where his coat of arms had been removed – shortly after his head. 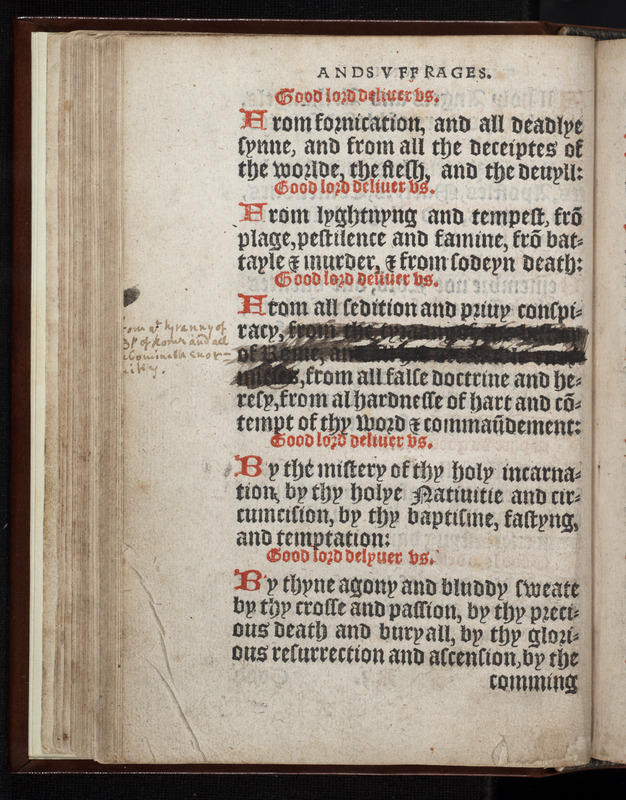 Church of England. The Primer, set furth by the Kinges Maiestie & his Clergie, to be Taught, Lerued [sic] and Red. London: Richard Grafton, 1546.

Towards the end of his reign, Henry VIII recognized that the English Church needed to have an official liturgy in the vernacular, but he was loath to see any dramatic break with tradition, especially of the sort evident in the new liturgies emerging from the Continental Reformed Churches. To that end, in 1545 he issued a Primer to supplant the wide variety of alternative liturgical books that had been in circulation since the 1530s. The Primer aimed to standardize worship throughout the kingdom and, in many ways it served as precursor to the first Book of Common Prayer that would appear in 1549. Displayed is a censored version of the Litany which prays for deliverance from the tyranny of the Bishop of Rome. Drawing upon medieval Books of Hours, George Joye’s Hortulus animæ, as well as Lutheran liturgies, by the end of 1546, The Primer had already seen ten editions. 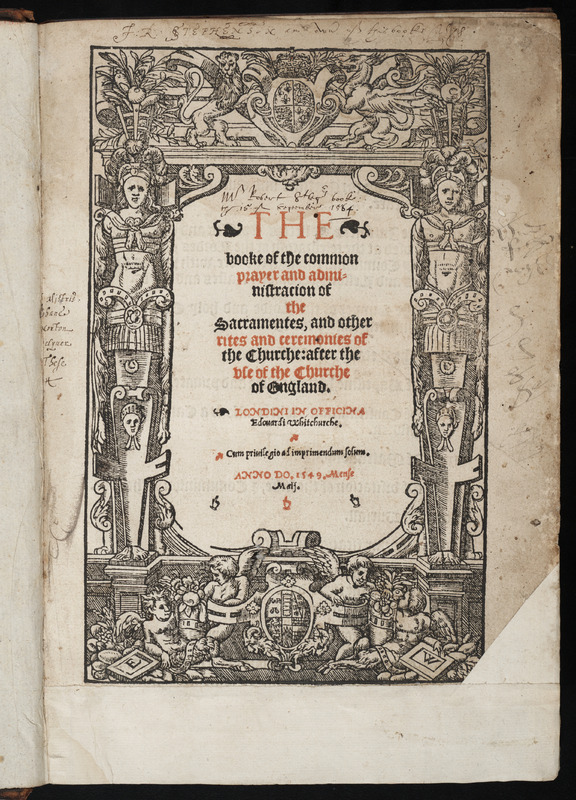 Church of England. The Booke of the Common Prayer and Administracion of the Sacramentes. London: Edward Whitchurch, 1549.

Together with the King James Version of the Bible (1611), the Book of Common Prayer is considered one of the greatest religious treasures of English Renaissance literature. On 21 January 1549, Parliament passed the Act of Uniformity, making use of the new prayer book mandatory throughout the realm beginning on 9 June 1549. (The Fisher copy is the fourth edition, printed on 4 May of that year, giving some sense of the demand for the book.) Between 1549 and 1640 the BCP saw 350 separate editions, and between 1641 and 1700 there were another 230. All told, there have been about five thousand editions and impressions in the course of its long history. 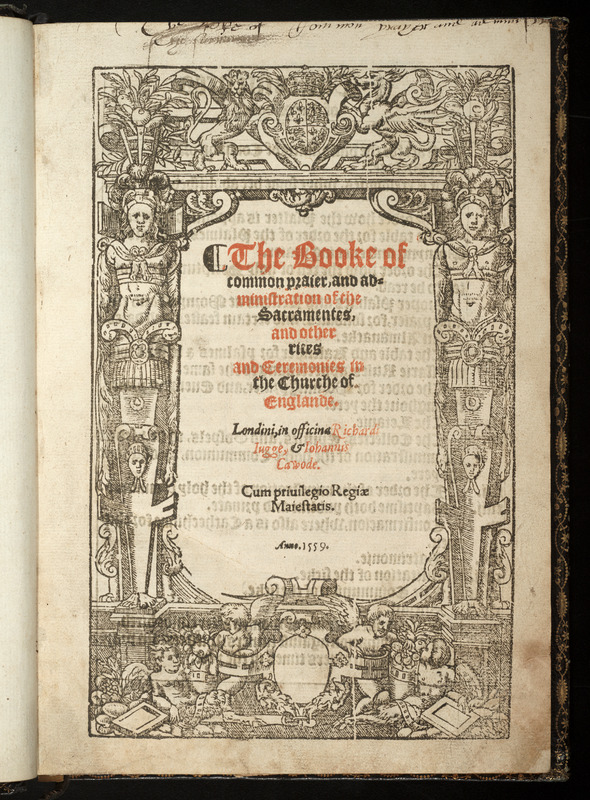 Church of England. The Booke of Common Praier, and Administration of the Sacramentes, and other Rites and Ceremonies in the Churche of England. London: Richard Jugge and John Cawood, 1559.

King Edward VI’s Prayer Book was suppressed with the succession of the Roman Catholic Queen Mary I, but when her half-sister Elizabeth ascended the throne in 1558, she restored its use with revisions that attempted to strike a balance between the sensibilities of her Catholic and Protestant subjects. Her 1559 Prayer Book, for example, omitted prayers against the ‘tyranny’ and ‘detestable enormities’ of the Bishop of Rome, as well as the so-called ‘black rubric’ which, in the 1552 Prayer Book, had been included to explain that kneeling to receive the Sacrament did not express any idolatrous veneration of the elements of bread and wine. The Fisher copy is the third edition of the first Elizabethan Prayer Book, and the first to include all of the revisions required by Act of Uniformity.