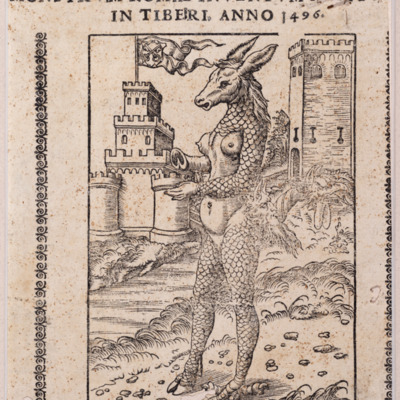 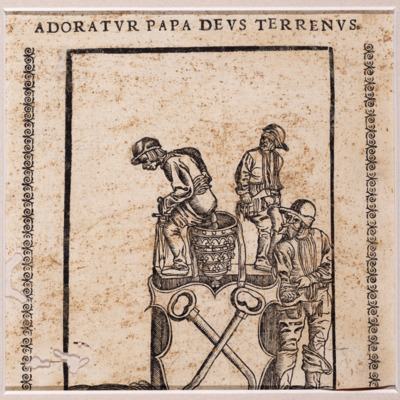 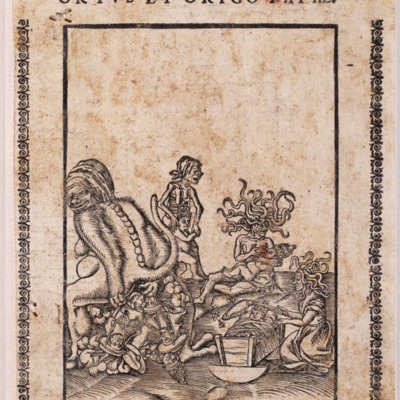 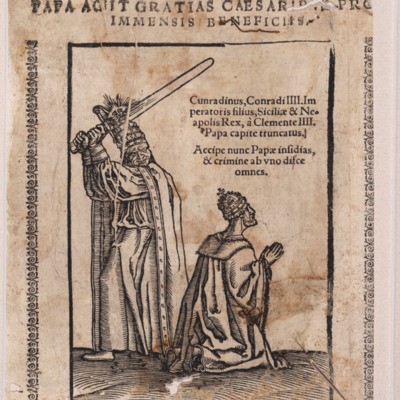 These scandalous caricatures were published to accompany one of Luther’s most polemical works, Against the Papacy at Rome, established by the Devil. They likely originated in the workshop of Lucas Cranach, and were subsequently printed by Hans Lufft, with descriptive verses written by Luther. Such illustrations as ‘the Monster of Rome’ displayed here were blunt instruments, devoid of the nuance of theological argument. Their strength was their ability to provoke hostility towards the old order, especially among the illiterate, and in that effort they were successful. Cartoons such as these elevated Luther to the status of a saint at the expense of the pope who is now depicted as Satan’s spawn. 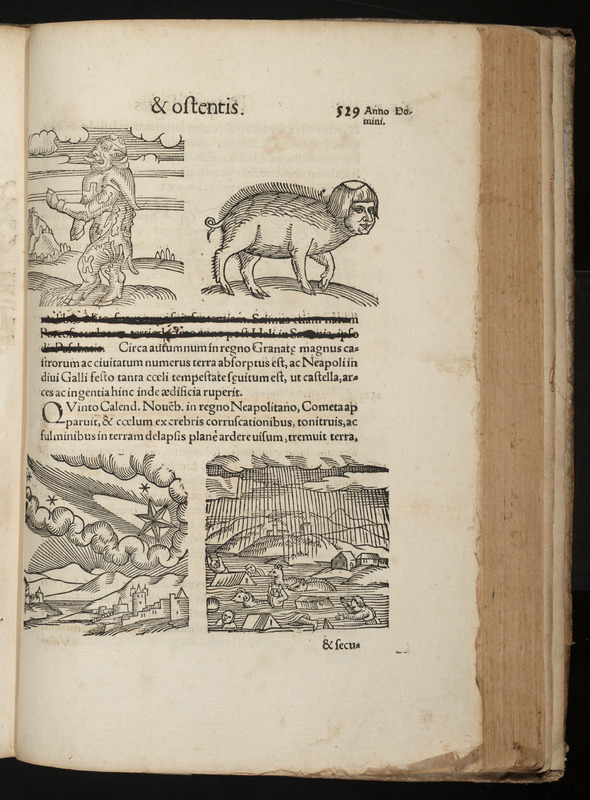 In this book, the Lutheran scholar Conrad Wolffhart (who wrote using the name ‘Lycosthenes’) records those wonders that had supposedly materialized in Europe since the year 1500, corresponding neatly with the Reformation era. Not surprisingly, signs of God’s displeasure with the Church had begun to manifest themselves in the emergence of freakish omens, such as the ‘Monster of Rome’ of 1496. Lycosthenes depicts this abomination next to a woodcut of a ‘pig priest’ that he claims to have been born in 1526 at Hall in Saxony on Easter Day. Such portents were intended to enflame the reforming sensibilities of the people, and prepare them for the imminent coming of Christ, whose signs these were. 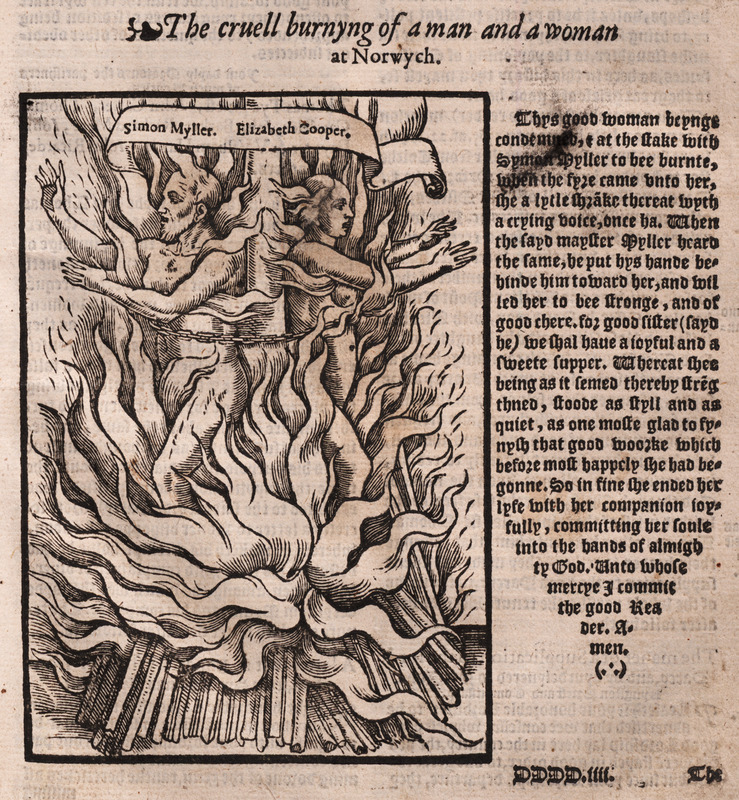 The persecution of Protestants by the Roman Church is arguably best recorded in this exhaustive, two-million word narrative, more commonly known as Foxe’s Book of Martyrs. The sufferings of the reformers related herein served to associate the new movement’s adherents with the primitive saints as described in the Book of Revelation, and also helped to entrench the myth of a divinely ordained Protestant England. Foxe here depicts a pageant of the oppressed, stretching back in time to the Roman emperors, though with his focus firmly on the popes as heirs to the early pagan tormentors. When first issued, Foxe’s Martyrs was the largest publishing endeavour ever undertaken in Britain. Together with Shakespeare and the Bible, it is one of the very few books never out of print in England before 1900. 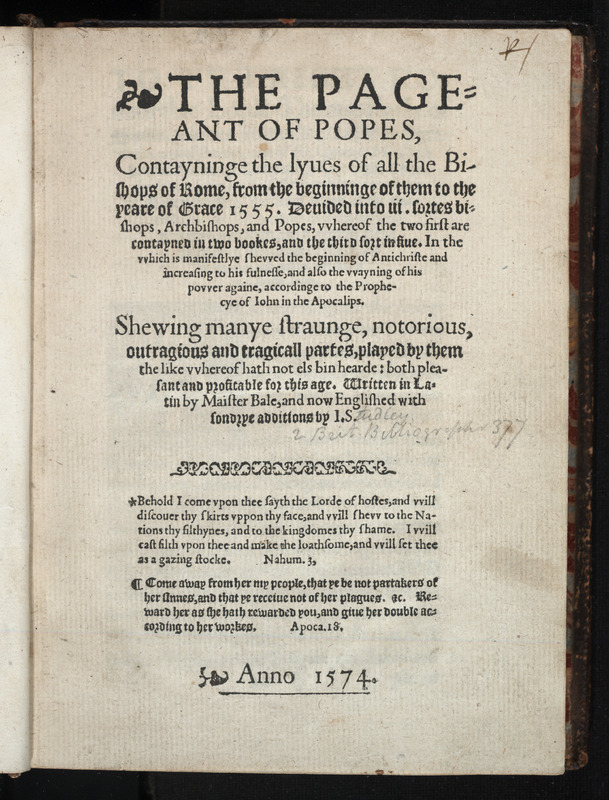 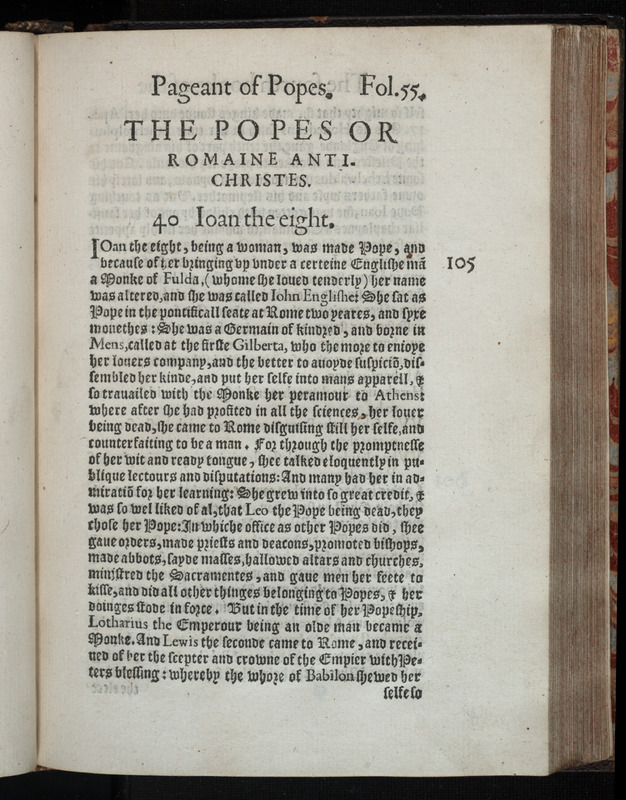 John Bale began his religious life as a Carmelite friar, but became a Protestant about the year 1536. His view of the papacy as the antichrist is clearly revealed on the title page to this work. In Bale’s opinion, it was only appropriate that it should be the English who would strike down papal power, since theirs was the nation of Constantine who first established true religion in the Roman Empire. Each pope is given a brief biography, the majority of which include a catalogue of their most egregious offences. Originally written in Latin for consumption beyond Britain’s shores, it was translated into English by John Studley. Displayed is the story of Pope Joan, the legendary and scandalous account of the only female pope – who never was. 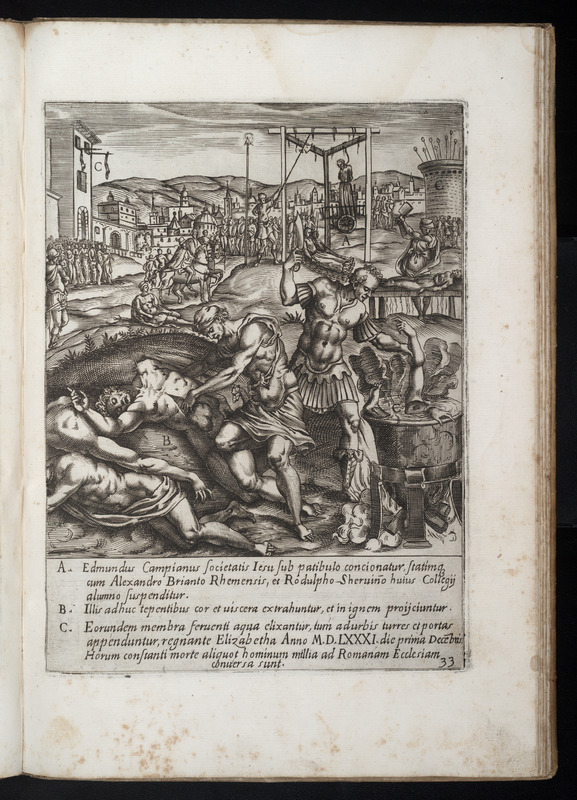 Thirty-four of the frescos executed by Nicolò Circignano, that once adorned the walls of the English College in Rome, are recorded here in Cavalieri’s engravings. Twenty-four depict early martyrs, while the last ten are devoted to Catholics who died during the English Reformation. The book was published by the priests of the College in June of 1584, less than a year after the chapel decoration was finished, to extend the propaganda value of the paintings beyond the college precincts. The imagery is deliberately provocative: executioners are often depicted in the dress of ancient Roman centurions, thereby linking the sufferings of the new saints (who wear contemporary dress) with those who first gave their blood for the life of the church. The book was also designed to encourage a military invasion of England, such as would occur four years later with the Spanish Armada. Depicted is the martyrdom of St Edmund Campion in 1581. 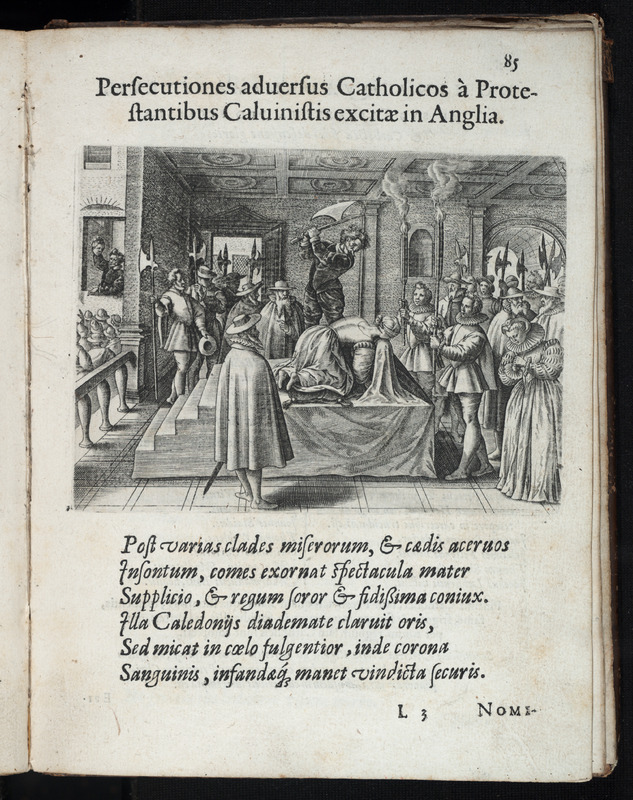 Unlike Ecclesiæ anglicanæ trophæa, this book was not intended to inspire the faithful to martyrdom so much as to rouse in them a sense of indignant horror at Protestant atrocities. It depicts the persecution of Catholics under Henry VIII, the Huguenots, Calvinist soldiers, as well as the abuse of Irish and English Catholics under Elizabeth I. Each image is accompanied by a six-line, explanatory hexametre verse. The popular work has been described as an ‘Armada pamphlet’ since by it Verstegan intended to provide Catholic Europe with a justification for the invasion of England in response to the sufferings of English, Irish, and Scottish Catholics depicted herein. Displayed is the execution of Mary, Queen of Scots in 1587. 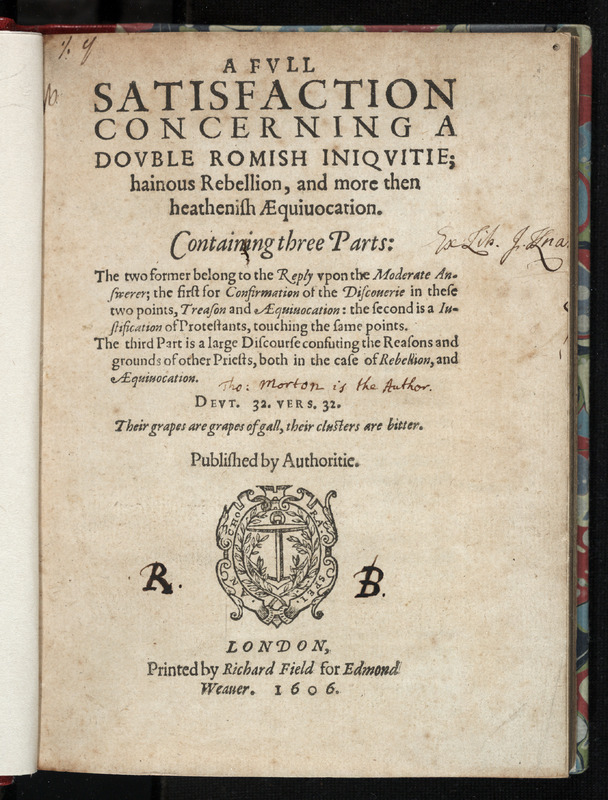 Published shortly after the executions of Guy Fawkes and his co-conspirators, in this book Thomas Morton, one of the King’s chaplains, propagates a caricature of Catholics as inherently deceitful. His argument turns on the question of whether Catholics can be trusted to take oaths, since some missionary priests had argued that it was possible to swear an oath with the lips while not embracing the words in the heart, in order to protect oneself or one’s fellow Catholics. The practice came to be known as ‘equivocation’. Morton was appointed Bishop of Durham for his services to the Crown, and wrote two more books on the same subject. 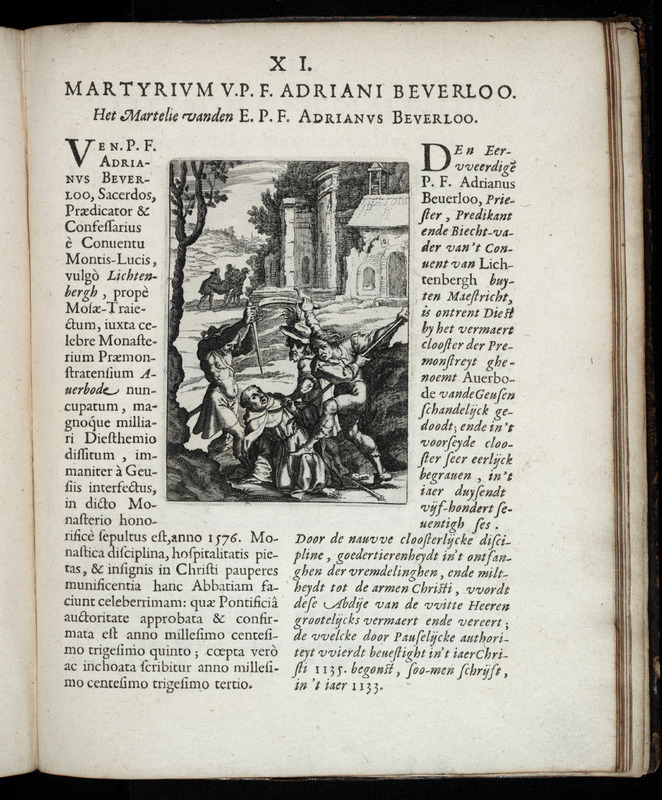 This very rare quarto records the sufferings of the Franciscan Friars in the Low Countries, principally at the hands of an extremist branch of the Calvinists known as the ‘Geuses’, during the internecine wars of the 1570s and 1580s. Boener clearly drew his inspiration from the illustrated martyrology composed by the Anglo-Dutch Catholic publisher and engraver, Richard Verstegan (see #66). Somewhat ironically, the gruesome depictions of the martyrdoms are juxtaposed against rather charming background views of the Flemish land- and cityscapes. The Geuses, a band of Protestant radicals hailing from the region of Ghent and Bruges, claimed the right to kill Catholic clergy on sight, destroy church buildings and monasteries, and generally disrupt Catholic life and worship throughout the area.