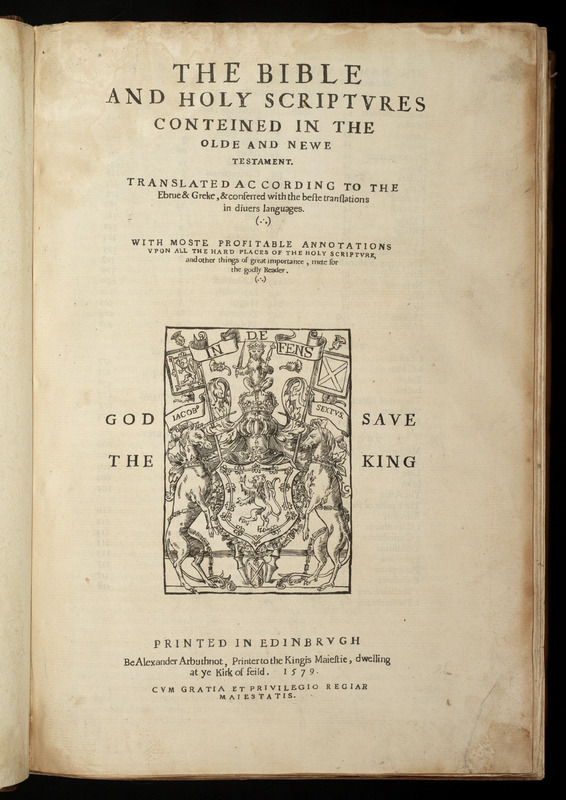 The Bible and Holy Scriptures conteined in the Olde and Newe Testament. Edinburgh: Alexander Arbuthnot, 1579.

This reissue of the 1562 second edition of the Geneva Bible was the first English-language copy of the Scriptures printed in Scotland. To underwrite its publication, the General Assembly ordered every parish in the kingdom to pay £4 13s. 4p. towards its production. In the same year that it appeared, the Geneva was officially designated the authorized Bible of the land by the Scots Parliament. As the title page to the New Testament indicates, the printing was actually begun by Thomas Bassandyne in 1576, but was completed by his associate, Alexander three years later. 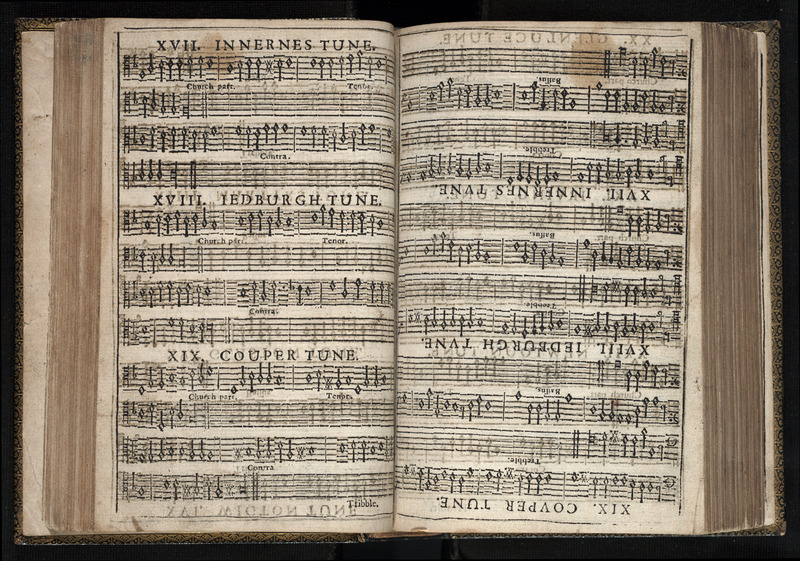 The Psalmes of David in Prose and Meeter, with their whole Tunes in foure or mo Parts. Edinburgh: The Heirs of Andrew Hart, 1635.

In the early days of the Scottish Reformation, polyphonic singing was deemed papist in character, and largely disappeared from services in churches and chapels. The earliest collections of metrical Psalms, intended for congregational use, therefore, provided tunes without harmony. In 1625, the Aberdeen Psalter first appeared with some harmonization, but this 1635 edition is arguably the greatest of the early Scottish Psalters owing to its full harmonization throughout. The mise-en-page is also interesting, since opposite pages are printed upside down, allowing the singers of the various parts to share a single book, reading their respective lines from both sides of the table on which the psalter rested. 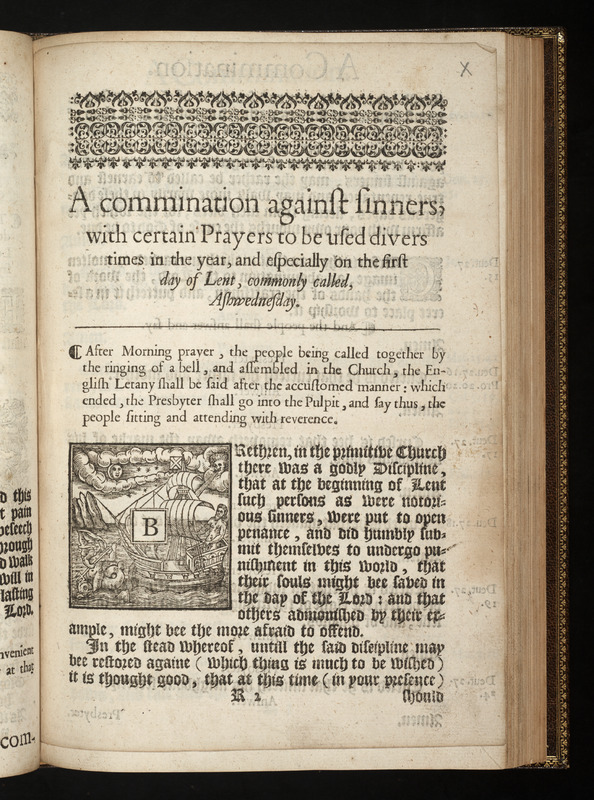 The Booke of Common Prayer, and Administration of the Sacraments, and other Parts of Divine Service for the Use of the Church of Scotland. Edinburgh: Robert Young, 1637.

Few books have fueled as much anger and have had such wide repercussions as this first Scottish edition of the Book of Common Prayer. The faltering attempts of King James VI to make liturgical reforms in Scotland in 1616 and 1621 were inherited by his son, Charles I, who tried to impose uniform worship throughout Scotland, a task that in the end helped to set his nation on the road towards Civil War and regicide. The text is based on Edward VI’s 1549 Book of Common Prayer with such judicious amendments as replacing the word ‘priest’ with ‘presbyter’. Its introduction on 23 July 1637 incited riots throughout Edinburgh. 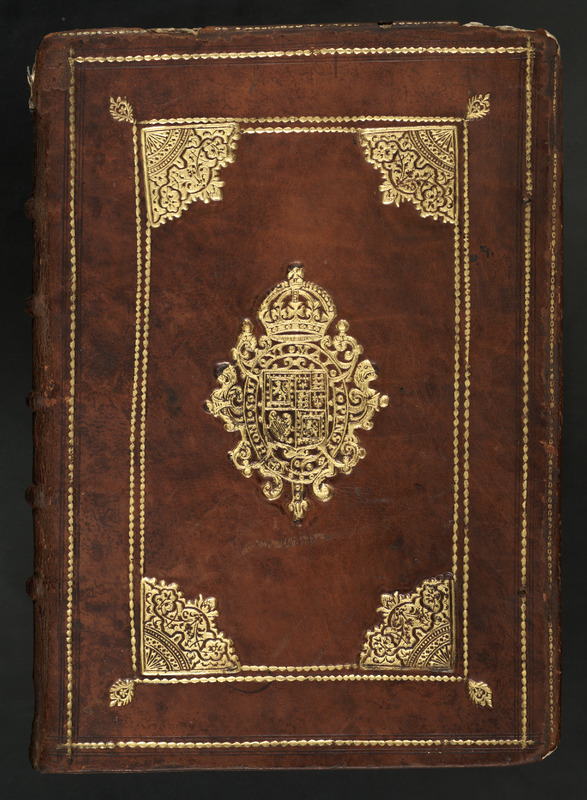 The Booke of Common Prayer, and Administration of the Sacraments, and other Parts of Divine Service for the Use of the Church of Scotland. Edinburgh: Robert Young, 1637.

In the months following the riots, the Scots remained defiant. The trajectory that began with the imposition of the despised Prayer Book led to the abolition of the bishops in Scotland and ultimately to the violence of the Civil War itself. The printer, Robert Young, was an Englishman who fled south of the border, forfeiting some of the costs incurred by the project. This rare large-paper copy of the Prayer Book is in a contemporary calf binding with gilt paneled sides, large corner stamps, and the royal arms of King Charles I as King of Scotland embossed on the upper cover, suggesting early ownership by someone more sympathetic to the liturgical changes. 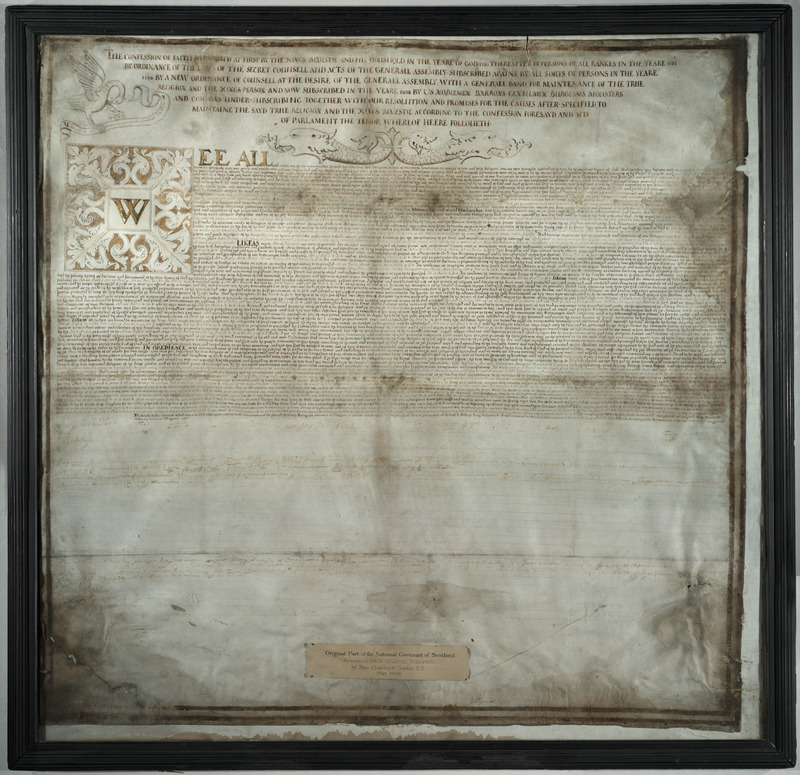 On loan from Knox College, University of Toronto.

‘Covenanting’ meant much more to the Scots (and members of the Reformed tradition in general) than just a legal contract; it was a pledge of both national and personal reform, directed at the preservation of the purity of the Presbyterian Church in Scotland as well as the renewal of the Church of England along the lines of the Continental Reformation. This large copy of the Covenant, beautifully engrossed on vellum, was formerly in Prestonfield House, Edinburgh, the home of Sir William Dick, one of the city’s leading covenanting merchants. This copy was presented to Knox College in 1906 by alumnus, the Reverend Charles W. Gordon who is better known by his pen name ‘Ralph Connor’, the author of Glengarry School Days. 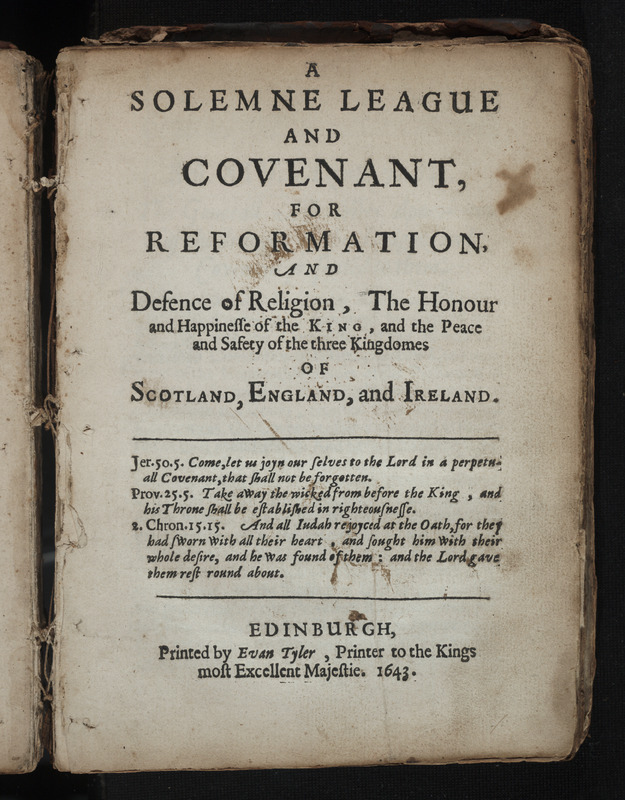 In 1643, the ‘Solemn League and Covenant’ was entered into between representatives of the Scottish people and English Parliamentarians, with the Scots pledging their support in return for the imposition of Presbyterian church polity and doctrine throughout this new Commonwealth. It was ratified by the General Assembly of the Kirk of Scotland on 17 August 1643 and by the Westminster Assembly one month later; the following January, the Scottish army marched into England in support of Parliament. In the autumn of 1643 the Solemn League was printed in large runs in Scotland, and issued simultaneously by the presses of Robert Bryson and Evan Tyler in Edinburgh, as well as by Edward Raban in Aberdeen. 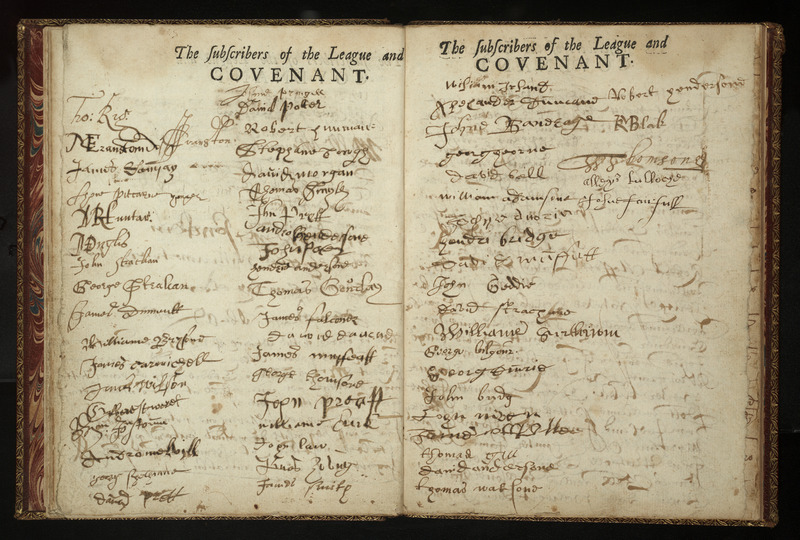 A Solemn League and Covenant for Reformation, and Defence of Religion, the Honour and Happiness of the King, and the Peace and Safety of the Three Kingdoms of Scotland, England, and Ireland. Edinburgh: Evan Tyler, 1648.

This copy of the Solemn League of 1648 comes from the parish of Scoonie in Fife. On 31 December 1648 and 1 January 1649 it was signed by the minister, eight elders, sixty-four others, and includes the names of more than a hundred members of the ‘church of Skony that cannot writ.’ For subscribers, the Solemn League was more than just an oath, since God was considered one of the parties to the contract. Those who had signed were encouraged to hang copies in their homes to remind themselves of their obligation to God, for the prosperity of their earthly kingdom. Charles II was forced to subscribe to it on 23 June 1650 at Garmouth, Scotland, though he did not renew it after the Restoration of the Monarchy in 1660.