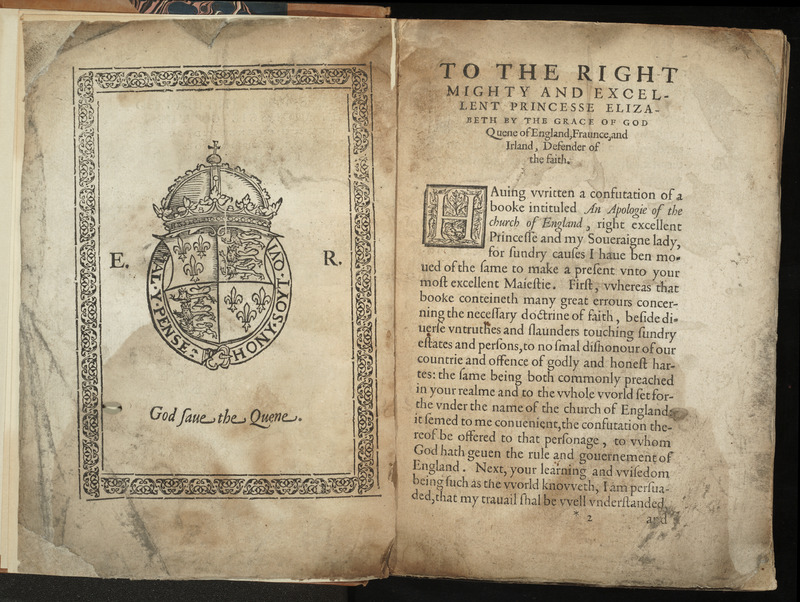 Thomas Harding, who was appointed Regius Professor of Hebrew at Oxford by Henry VIII in 1542, had been a committed Protestant before returning to the Church of Rome early in the reign of Queen Mary I. He eventually taught Catholic theology in both Douai and Louvain, one of more than one hundred senior Oxford scholars who left England for the Continent shortly after Elizabeth’s accession. A response to John Jewel’s Apologia for the Church of England, Harding’s book challenges the claim of Anglican apologists that their Communion was the true incarnation of the primitive church. The choice to publish in English rather than Latin suggests that the target audience was the ordinary reading public of Britain; the inclusion of the Queen’s royal arms, a statement of Catholic loyalty. 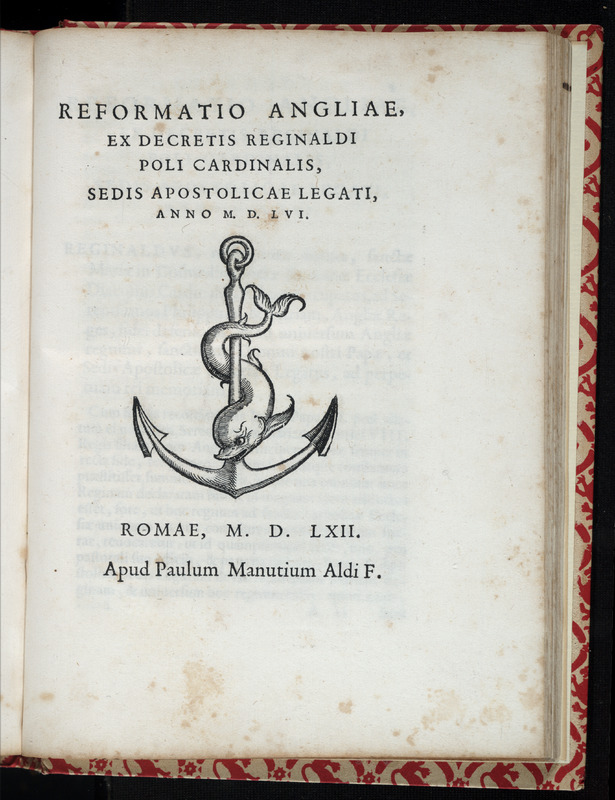 Reginald Pole was the last Roman Catholic Archbishop of Canterbury. For almost twenty years he lived in exile on the Continent, returning to his homeland as papal legate in 1554, one year after the accession of Queen Mary I. He hastily convened a synod at Westminster to restore the English church to full Catholic communion. The proceedings and decrees of the synod were recorded in this book, first printed at Rome in 1562, the same year that the Council of Trent reassembled for its final session. Pole died on 17 November 1558, seven hours after the death of his patron, Queen Mary. 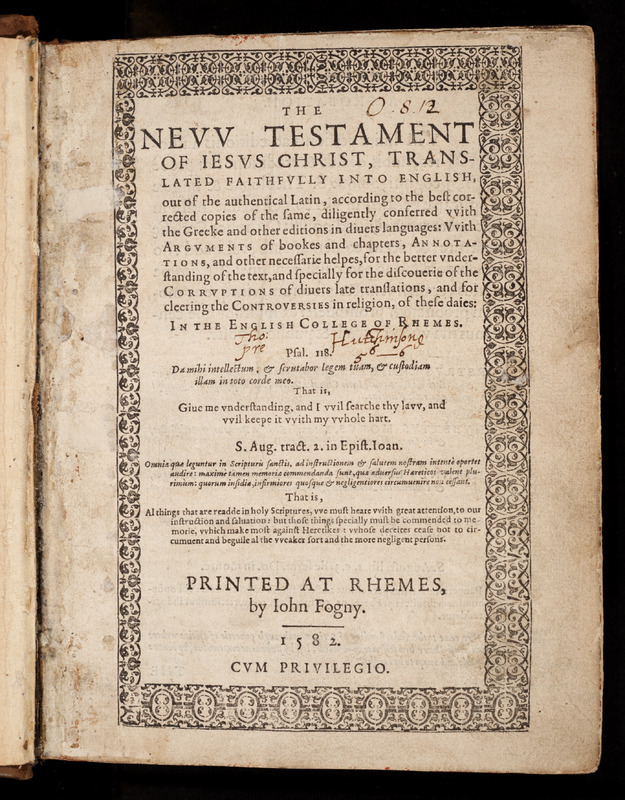 The Council of Trent officially designated the Latin Vulgate to be the Bible of Catholicism in 1546. A papal edict of 1559 formally forbade its translation into the modern languages. Nevertheless, a Catholic version of the Scriptures appeared in English less than twenty-five years later, a reflection of the desperation felt by exiled English Catholics who recognized that their co-religionists at home would not long be able to withstand the lure of the Geneva Bible. The translation was undertaken about 1578 in Rheims, and sanctioned by Pope Gregory XIII in 1580.  The initial print run was massive: five thousand copies were printed and exported to England as contraband, enraging Queen Elizabeth and her counselors. 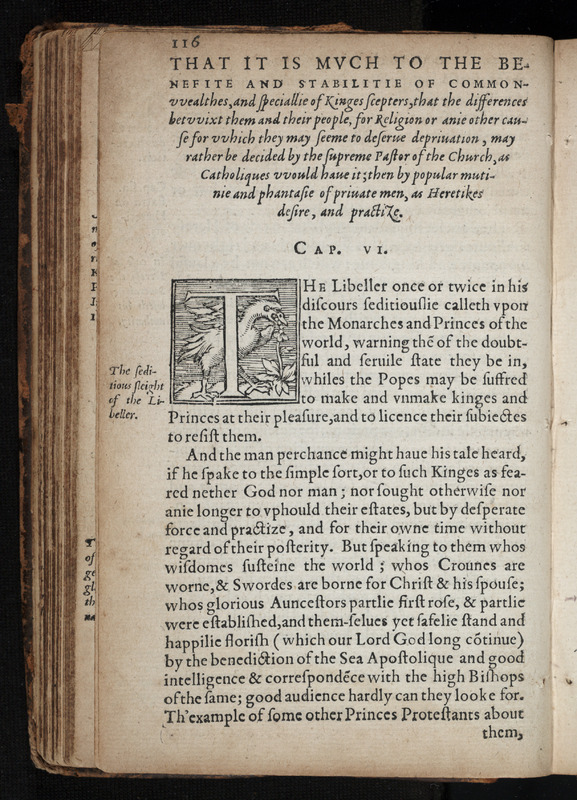 William, Cardinal Allen (1532-1594). A True, Sincere and Modest Defence of English Catholiques that Suffer for their Faith both at Home and Abrode. [Rouen: Parson's Press, 1584].

William Allen was the de facto leader of English Catholicism during the Elizabethan era, albeit mostly from the safe distance of France and Rome. A fellow of Oriel College, Oxford as well as a Canon of York Minster Cathedral, he left England for Louvain in 1561, after refusing the Oath of Supremacy. In this book, he catalogues the humiliations inflicted on his Catholic countrymen, but carefully avoids casting blame on the Queen herself. Four years later, however, Allen changes his stance and openly compares Elizabeth to the Old Testament figure of Jezebel in his Admonition to the Nobility and People of England. In the end, his publications contributed to, rather than lessened, the hardships experienced by English and Welsh Catholics. 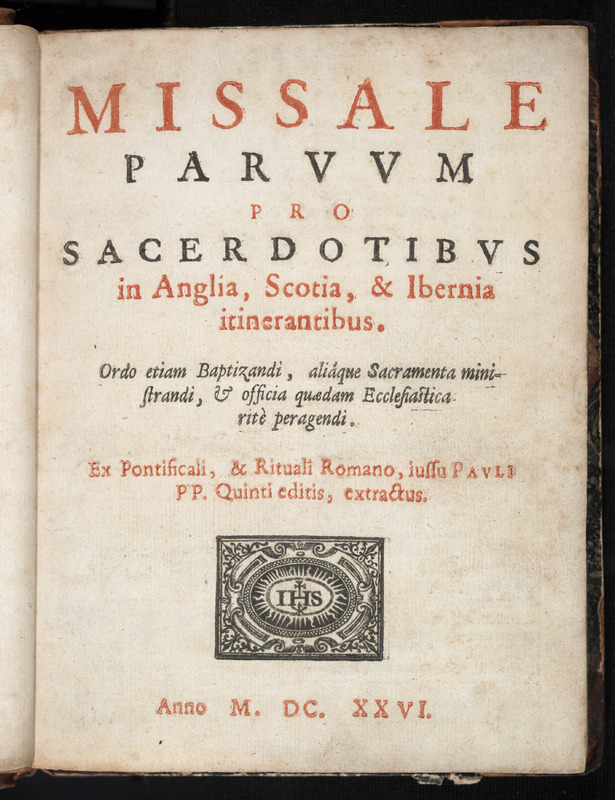 During the reign of Queen Elizabeth I, hearing Mass was prohibited upon pain of crippling fines as well as possible death for the priest. With Elizabeth’s accession, no new Roman Missals for use by English Catholic clergy were printed until 1615. This volume is a third edition of that text printed at St-Omer for the Jesuits, and bearing their insignia on the title page. Included is the English translation of the Sarum Rite of Marriage, in which the bride promises that she will be ‘bonaire and buxome, in bed and at board, till death us depart.’ Since these Missals were contraband, they survive in relatively small numbers, with only about forty copies recorded in public institutions.