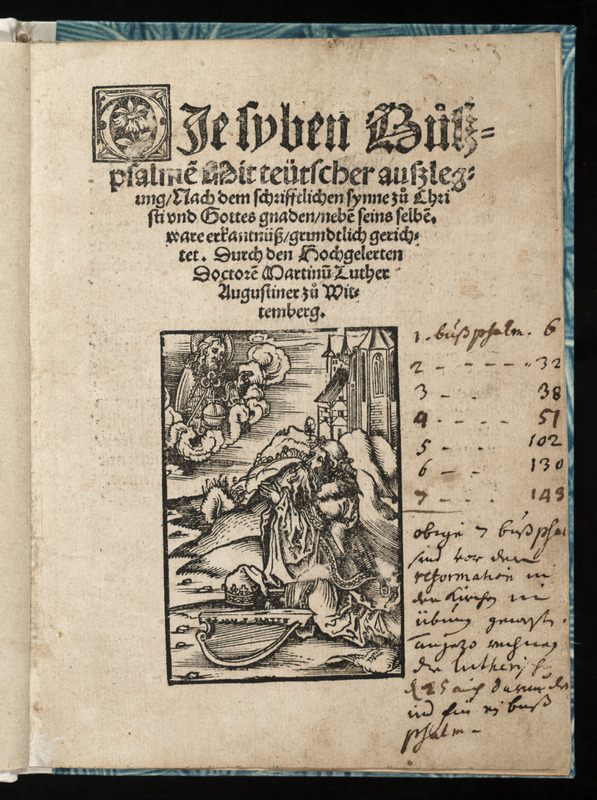 Originally printed at Wittenberg in 1517, this commentary on the seven penitential psalms was the first original work by Martin Luther to be published. In it he sets forth his doctrine of sin and grace, as well as the comfort to be found through the Gospel. Together with his colleagues at the university in Wittenberg, Luther had begun to formulate an evangelical theology that would seriously threaten to undermine the Scholasticism that had dominated the academy for centuries. Strasbourg, where this pamphlet was published, would be among the chief centres for print in this era of controversy. 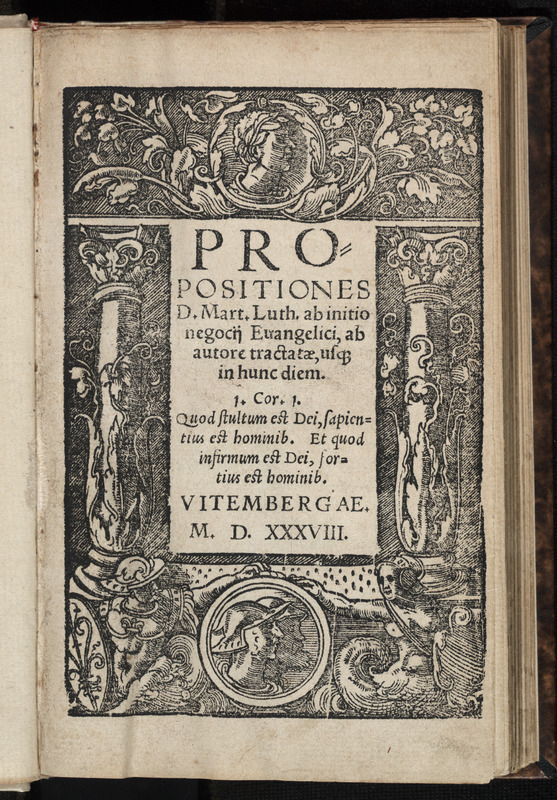 On 31 October 1517, Martin Luther allegedly hammered ninety-five propositiones or theses, questioning certain practices and doctrines of late medieval Christianity – especially the purchase of indulgences – to the church door of Wittenberg Castle, initiating what has come to be known as ‘The Reformation’. The Ninety-Five Theses not only initiated a religious revolution; they also launched a formidable publishing career for Luther. In the year following the appearance of the Theses, eighteen more of his original works were published, the most popular of which was a sermon attacking the practice of indulgences. It was Luther’s growing renown in the years after 1517 that actually caused the print trade to flourish in his hometown, and in the end Wittenberg would publish more books in the course of the sixteenth century than any other place in the German-speaking territories. 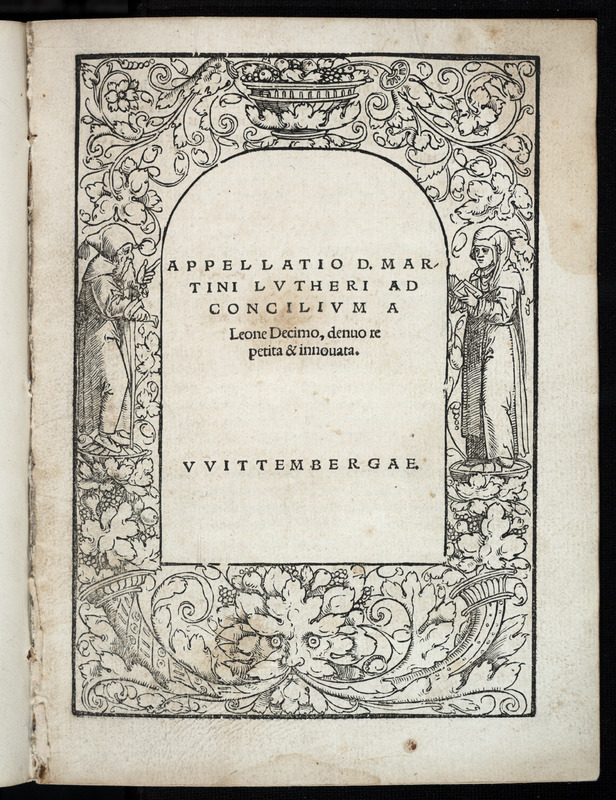 In October of 1518, Luther was summoned to explain his doctrines before the papal legate, Thomas, Cardinal Cajetan (1469-1534), at the Diet of Augsburg. It rapidly became clear that his case would not receive an unbiased hearing from Roman authorities, and that he would in fact be taken to Rome to face interrogation there. With the help of his supporters, he escaped Augsburg and safely returned to Wittenberg. His response was this pamphlet, first printed in 1518, and reprinted in 1520, shortly after Pope Leo X had excommunicated Luther in the famous Bull, Exsurge Domine. The printer, Melchior Lotter, would also issue the first edition of Luther’s German New Testament in 1522. 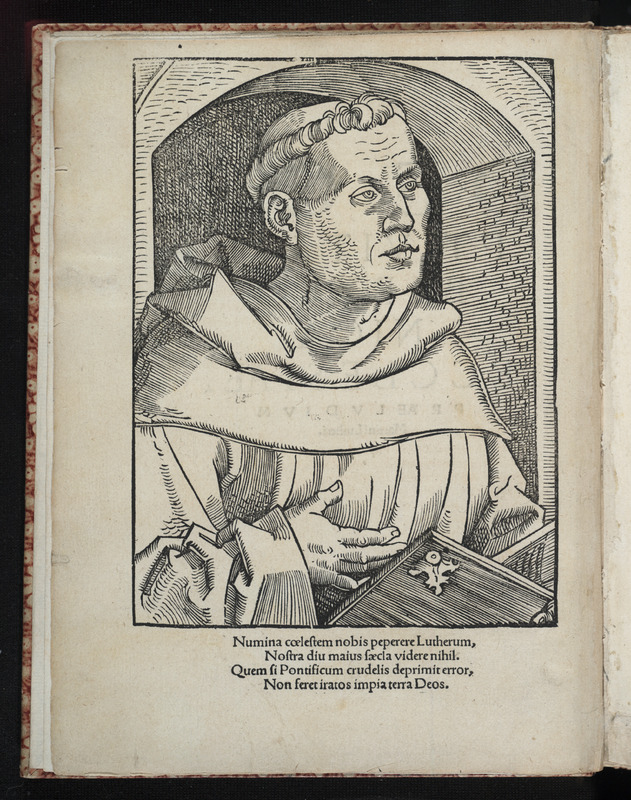 In this pamphlet, one of the three great Luther treatises of 1520 (together with ‘On Christian Liberty’ and ‘Address to the Nobility of the German Nation’), the Reformer argues that the legal structure of the Roman Church has reduced ordinary Christians to the status of slaves. The three Biblical sacraments he recognizes – baptism, confession, and the Eucharist – have been abused by the medieval church to tighten its grip on the faithful, rather than using them to bring believers to true freedom in God. This third printing of ‘The Babylonian Captivity’ is the first to include the famous woodcut portrait of Luther, executed by Hans Buldung Grien. Its inclusion is a clear sign of the celebrity status Luther had quickly achieved among the intelligentsia of Europe in the early years of the Reformation. 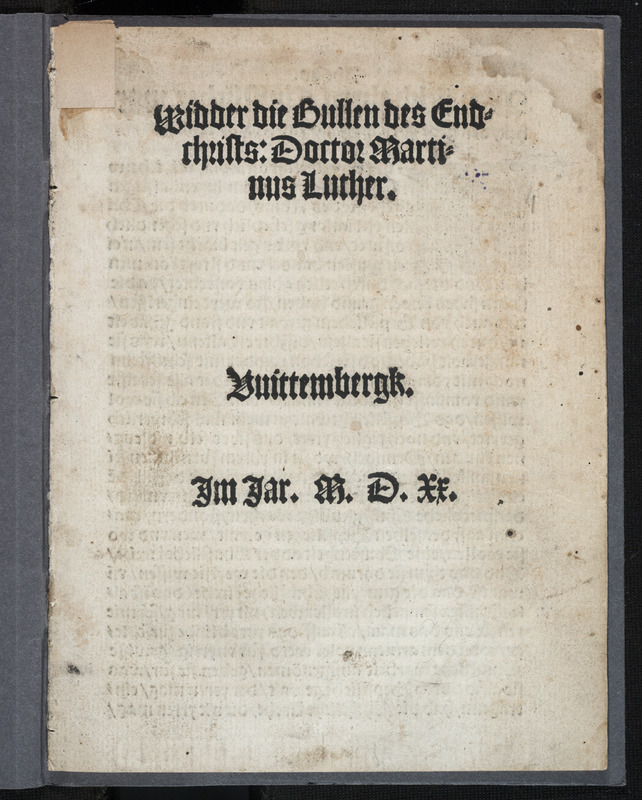 Luther initially believed the Bull, Exsurge Domine, to be a forgery, claiming that whoever the author was, that person was the Antichrist. When the document proved to be genuine, he responded with this pamphlet, ‘Against the Antichrist’s Bull’, in which he calls the condemnation a ‘cursed, impudent, and devilish’ document, and asserts that, according to the standards of Scripture, it is the Pope who is actually heretical. Exsurge Domine was the last papal document addressed to a united Western Christendom, and Luther’s response to it in this pamphlet, marks a watershed moment in the history of the Western Church. From this point on the division between Catholic and Protestant is truly established. 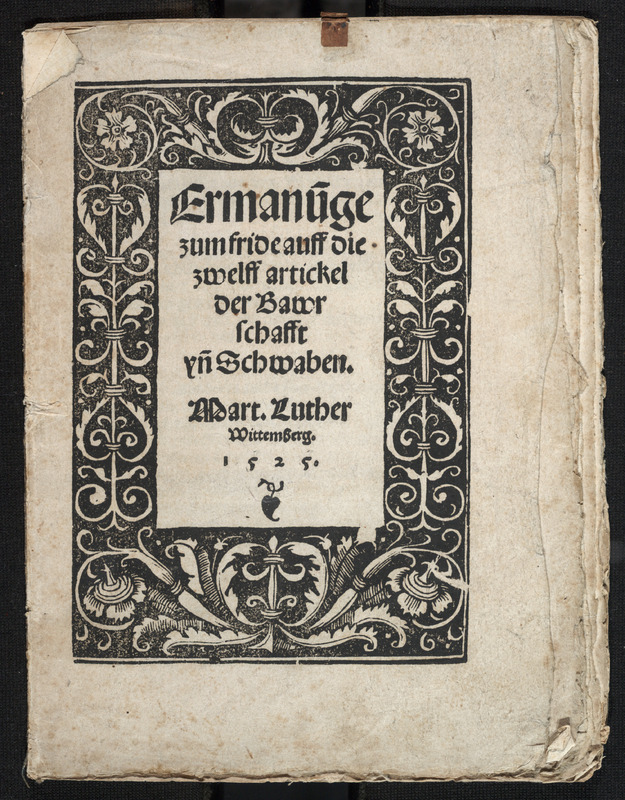 The Peasants’ Revolt of 1524 to 1526 was, in part, an unforeseen consequence of the Reformation begun by Luther seven years earlier. Luther, however, was taken aback by the chaos, and responded to it in this pamphlet, issued in April of 1525. While he chastises the princes whose actions have provoked the uprising in the first place, he simultaneously reminds the people that the principles of reform can never be used to justify the adoption of violent means to achieve a more just world. In the end, Luther rejected the peasants’ violence and in the third edition of this pamphlet encouraged the authorities to stand firm, even suggesting that if the peasantry continued their insurrection that they should be killed ‘like mad dogs.’ 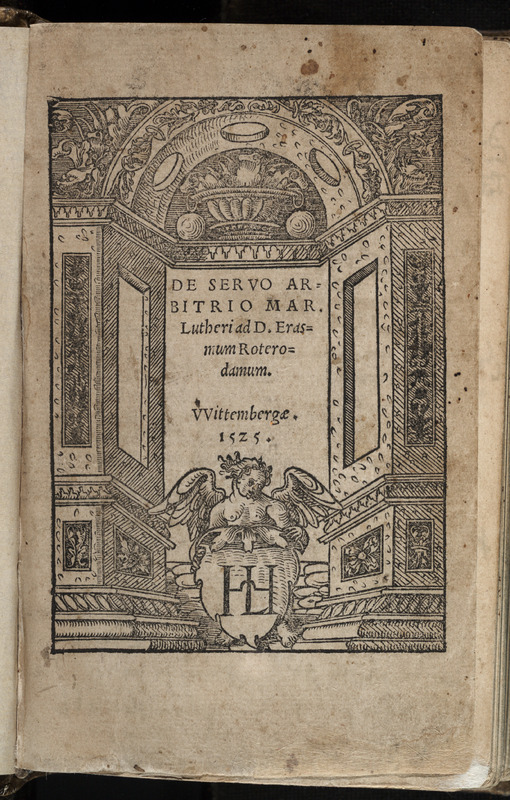 Whether human beings enjoyed free will and could participate in any meaningful way in the achievement of their own salvation would become one of the burning issues of the Reformation era. The position of Catholics and Protestants on this single point hardened throughout the course of the sixteenth century, delineating the fault lines between the two groups perhaps more than any other theological argument. This division was first laid bare by Erasmus in his 1524 treatise De libero arbitrio, on the freedom of the will. Luther’s response, first published here, in which he argues that it impossible for human will or merit to play any role in achieving salvation, is considered by many to be his greatest theological triumph. 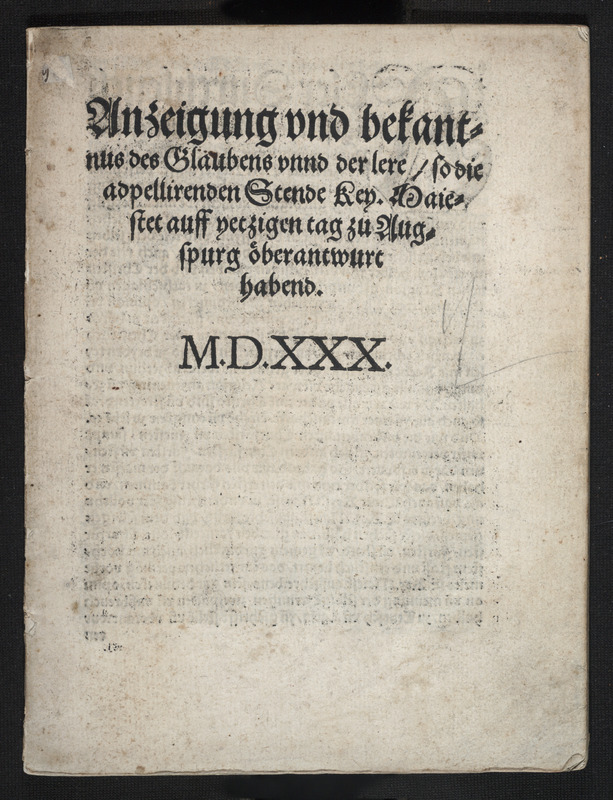 This is the first printed German edition of the Augsburg Confession, the fundamental expression of the new Lutheran faith. It consists of twenty-eight articles many of which were consistent with Catholic teaching. Among them, however, were other articles that would set Lutheranism apart from traditional orthodoxy, including the doctrine of justification by faith, the role of good works, the nature of the Church, the reduction of the sacraments from seven to two, and support for clerical marriage. This first German Confession is considered among the best editions since it agrees closely with the copy that was actually delivered to the Emperor, Charles V. 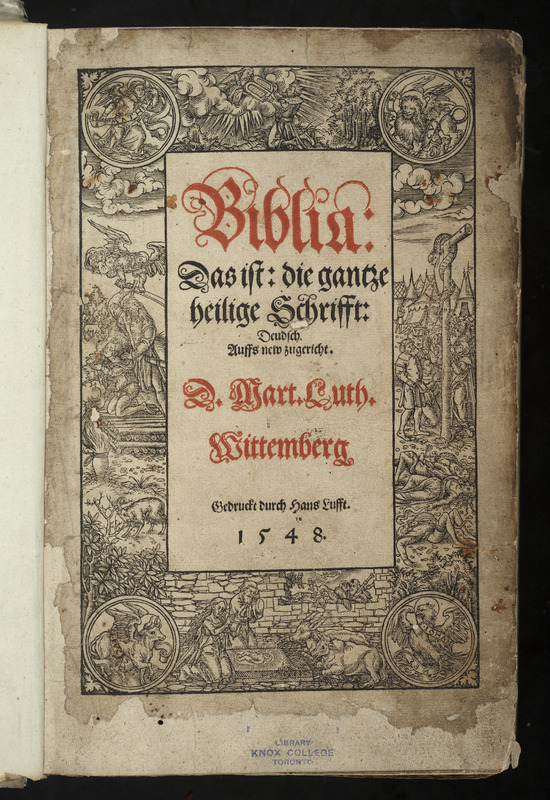 Luther’s Bible is the best known German translation of the Scriptures, the German equivalent of the King James Bible in the English-speaking world. He began translating his New Testament in the spring of 1521, using Erasmus’s Novum Instrumentum of 1516 and his Novum Testamentum of 1519 as his source texts. The New Testament was completed in three months and published at Wittenberg the following year. The woodcut illustrations were the work of his friend, Lucas Cranach. The printer, Lufft, came to be known as ‘the Bible printer’ since he produced the first complete Luther Bible in 1534 and, in the subsequent forty years, was credited with printing a further 100,000 copies. 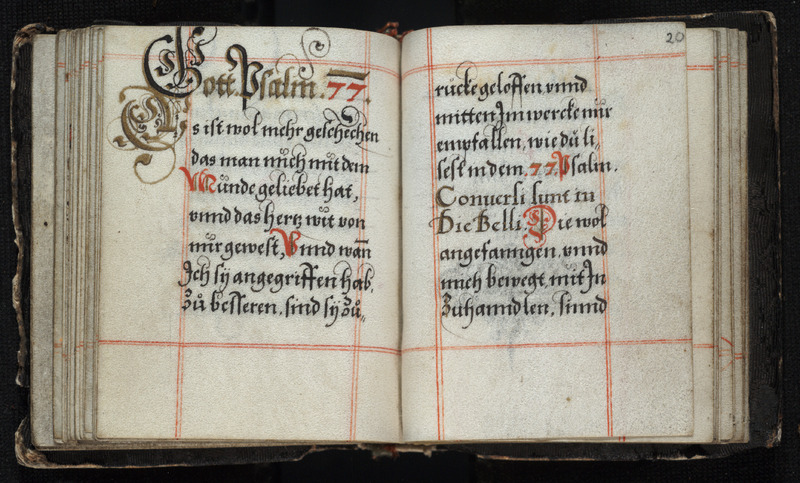 This miniature Lutheran prayer book contains, among other things, excerpts from Luther’s Small Catechism, in the edition of the Reformer Johannes Brenz (1538), as well as part of Luther’s exposition of the Lord’s Prayer, which was first printed in 1519. The book was given by Ursula Lempin to her son on 7 July 1607. An inscription at the beginning of the text, however, states that the manuscript was written by the man’s father, Ulrich Lempin, likely sometime in the sixteenth century. Based on the character of the hand, it was probably transcribed around the year 1550, with ornamentation in red, black-silver, and gold. Based on spelling and linguistic features, it was likely written in the southern part of the German-speaking territories.

← Case I: Europe on the Eve of the Reformation
Case III: The Reformed Tradition →
Case II: Luther and the German Reformation