Case X: The Reformation at Prayer

The adage lex orandi, lex credendi (the law of praying is the law of believing) had been one of the guiding principles for liturgical development in Christianity from at least the early fifth century. Under this rubric, public worship evolved from diocese to diocese under the watchful eye of bishops and senior clerics, while private devotions shaped the popular pieties and cults of saints, reaching their apogee on the eve of the Reformation. Quite simply, prayer was the formal expression of the church’s faith, and had to be carefully controlled to avoid heresy. This same principle guided the Reformers as they amended the perceived abuses in worship, all with the single aim of restoring the church’s worship to what they believed was its pristine, primitive form. Counter-Reformers hoped to reinforce the traditions of Catholicism by encouraging pious practices, like litanies, the veneration of images, and processions. Both Protestants and Catholic alike, however, required the use of print materials to help give voice to the prayers that were intended to be personal, but should also express what had become the new orthodoxies of the age. 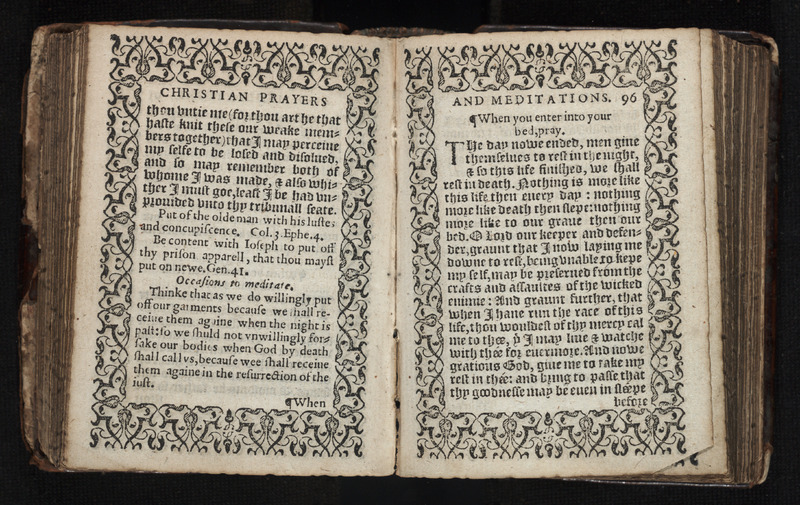 Bull’s Christian Praiers and Holie Meditations is similar in style and character to the official liturgical books of the era, complete with calendar and almanac, though the calendar has been altered to reflect the new realities of Protestant piety. Most of the traditional saints, with the exception of the apostles, have been swept away, and a definite preference for the stories of the Old Testament prevails over the hagiography of the late medieval church. The influence of the earlier Primers of Kings Henry VIII and Edward VI, as well as the Book of Common Prayer, is evident throughout, while the book’s portable format, and the ornate borders that frame each page, harken back to the era of the Catholic Books of Hours. 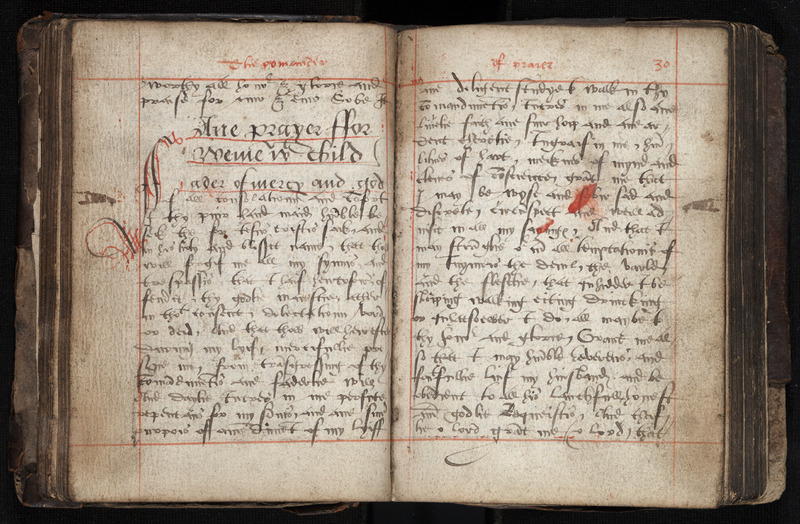 The Pomander of Prayer: Certane Godlie Prayeris to be Useit of all Christin Men and Wemen. [Scotland? ca. 1600?].

This manuscript collection of prayers, probably from northern England or Lowland Scotland, was crafted to reflect the evolving piety of second and third generation Protestants, particularly with regards to the reformed doctrines of Christ as mediator and Saviour, the pervasiveness of sin, and the fear of God. It incorporates numerous aspects of earlier Catholic piety as well, especially in terms of its ornamentation. Its restrained decoration, with large decorated initials, is reminiscent of the domestic Books of Hours one would have found in the mid-fifteenth century. Included are prayers by Henry VIII, Edward VI, and John Bradford, as well as several prayers falsely attributed to St Augustine of Hippo. Devotional books like this one gradually displaced the Primers and Books of Hours which had been used over the previous century and a half in Britain. 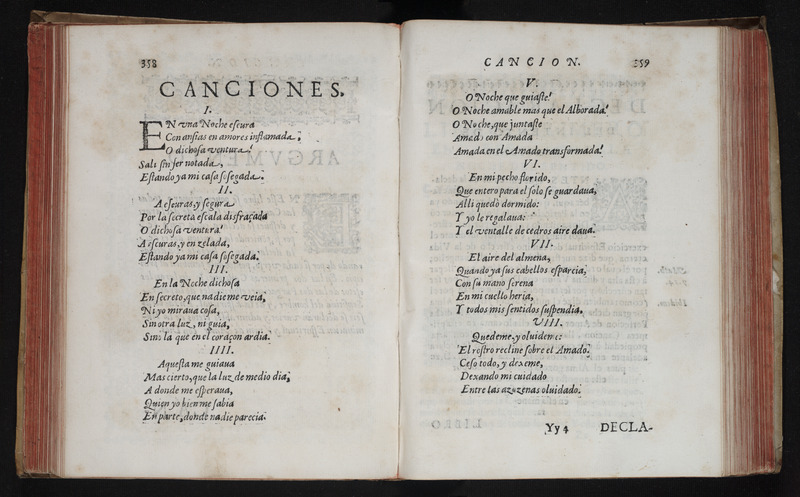 The contents and diminutive size of this booklet of sermons suggests its use by an itinerant minister, in preparation for the parish reception of Holy Communion, for which extensive preparation was expected in the new Reformed tradition. The sermon was an integral part of Reformed worship in general, and could often take more than an hour to preach. It was considered essential to the development of a unique Scottish Presbyterian piety that was integral to the culture well beyond the immediate Reformation era. 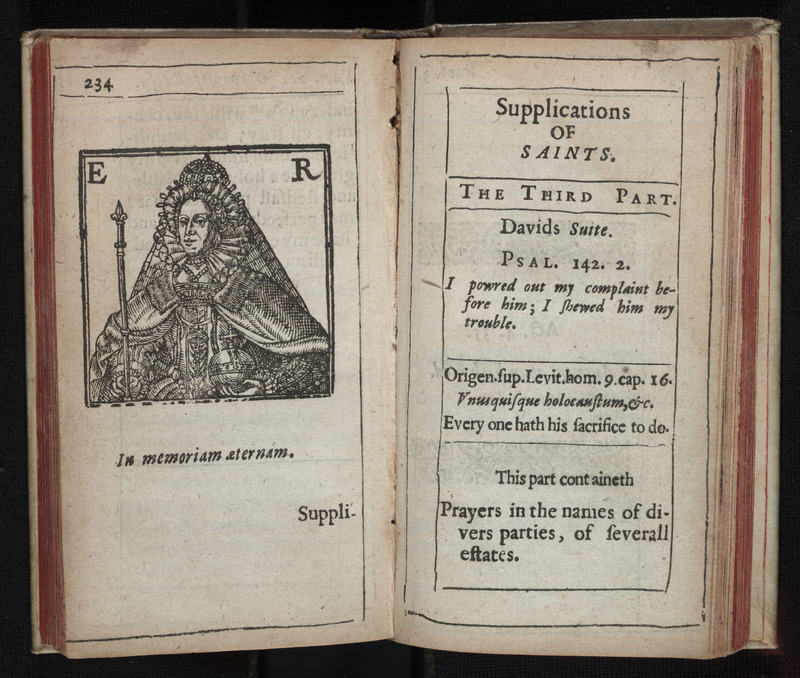 The compiler of the book, Thomas Sorocold (1561-1617), was rector of St Mildred’s Church, London during the declining years of the reign of Elizabeth I. First published in 1616, it saw almost fifty editions by 1723. It included devotions that could be shared by Christians of all stripes, such as meditations on the resurrection of Christ, the meaning of salvation, as well as grace before and after meals; but it also includes prayers that express the fractious character of the post-Reformation church, such as a thanksgiving for safe deliverance from the horrors of the Gunpowder Plot. The volume’s clearly Protestant bent combined with the brevity of its prayers and small format to ensure its favour and survival throughout the period of the Commonwealth and well into the Restoration. 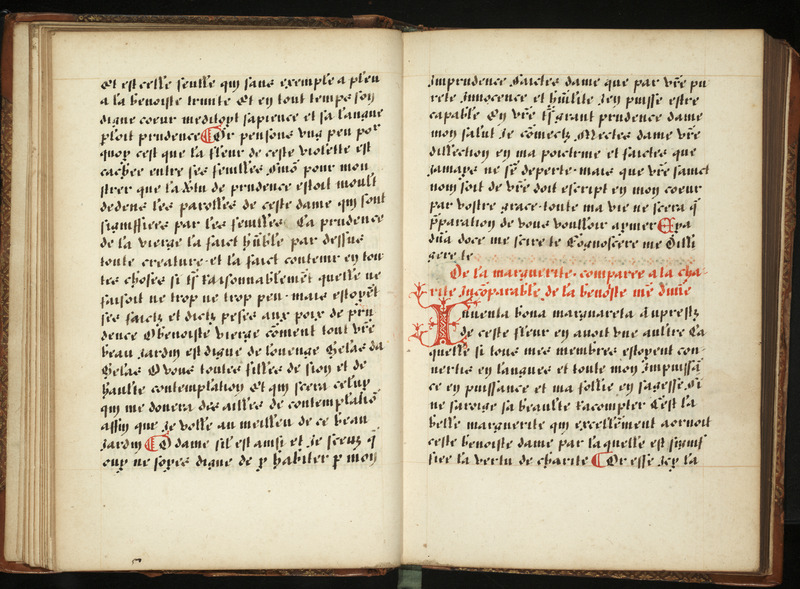 While the majority of Protestants rejected the idea of the Virgin Mary as intercessor, that role was retained (and even expanded) by Counter-Reformation Catholics, as this collection of meditations from around the time of the Reformation bears witness. The book uses the metaphor of a garden to consider Mary’s virtues, an image found as early as the fourth century in the writings of St Jerome and St Ambrose. The rich imagery of traditional Catholic piety proved resilient and inspirational, especially in the mission territories of the New World where the Counter-Reformation Church offered an alternative to the aridness of the Protestant intellectualism and neo-Scholasticism of the later sixteenth century. 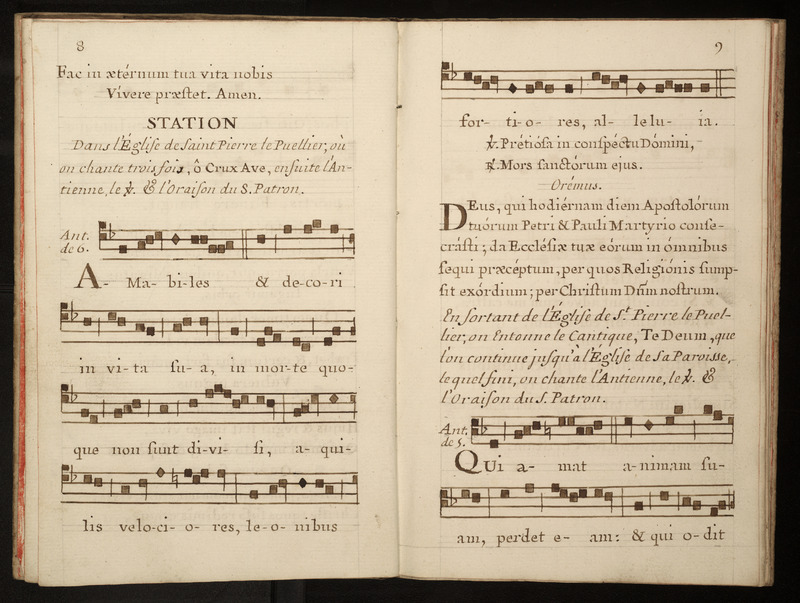 [Processional chants from the diocese of Poitiers.] Poitiers, [1610?].

In Christian tradition, processions are symbolic of the earthly pilgrimage of believers through this life to their final destination in heaven. The music that accompanied them was less controlled than the established settings of the Mass, reflecting local custom and tastes. This manuscript, written in a fine roman hand using Gregorian chant notation, was created to accompany some of the annual processions held in the city of Poitiers, and includes psalms and litanies. While Calvinists, like the French Huguenots, eliminated processions as expressions of popular devotion, Lutherans and Anglicans retained some for specific days and purposes, especially for Rogationtide and as part of funeral rites. In the Catholic world, processions in honour of the Blessed Sacrament, the Virgin Mary, and other saints have remained popular to the present day.