Principia has been described as the greatest book in the history of science. Although Kepler's laws of planetary motion were generally accepted by scientists in the seventeenth century, the underlying mathematical principle governing these laws had proven to be elusive. It was left to Isaac Newton to demonstrate the physical unity of the cosmos, based on the universal law of gravitation. For the first time a single mathematical law could explain the motion of objects on earth as well as the phenomena of the heavens. A second edition of Principia appeared in 1713. In 1729 the first translation into English, by Andrew Motte, was published. 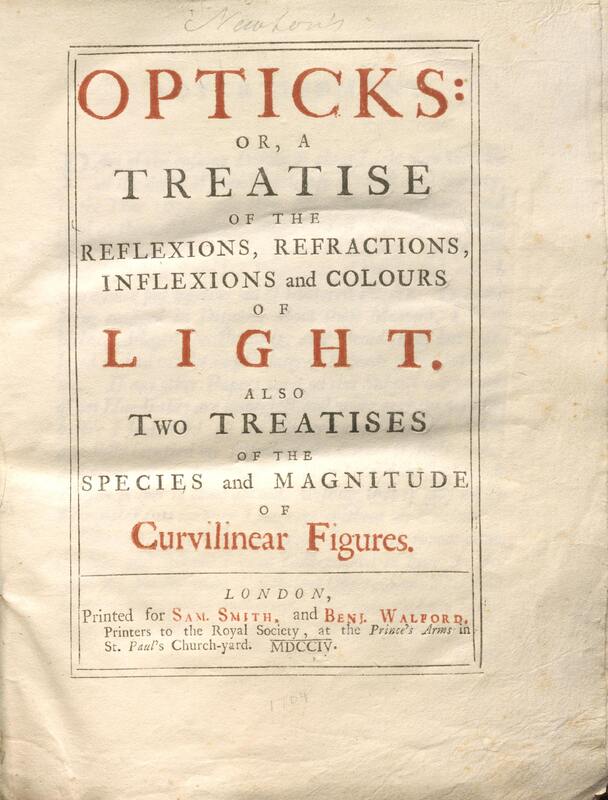 Opticks or, A treatise of the reflexions, refractions, inflexions and colours of light.  London: S. Smith, and B. Walford, 1704.

Sir Isaac Newton’s Opticks was first published in English in 1704. This landmark  work summarizes Newton’s discoveries and theories concerning light and colour. While philosophers and physicists had considered white light to be pure simple light, and that colours were modifications of white light, Newton demonstrated that white is a compound of pure elementary colours. A Latin translation, by Samuel Clarke, was issued in 1706.