The biblical account of the birth of Jesus may be found in the Gospels of St Matthew and St Luke, though told in very different ways. According to Luke, the Son of God is born in a filthy barn, and the first people to be told of the miraculous birth are shepherds – among the poorest of the poor in their day and society. The first to visit Jesus in Matthew’s Gospel are the Wise Men who are foreigners. In both cases, surprise is one of the central themes of their stories. 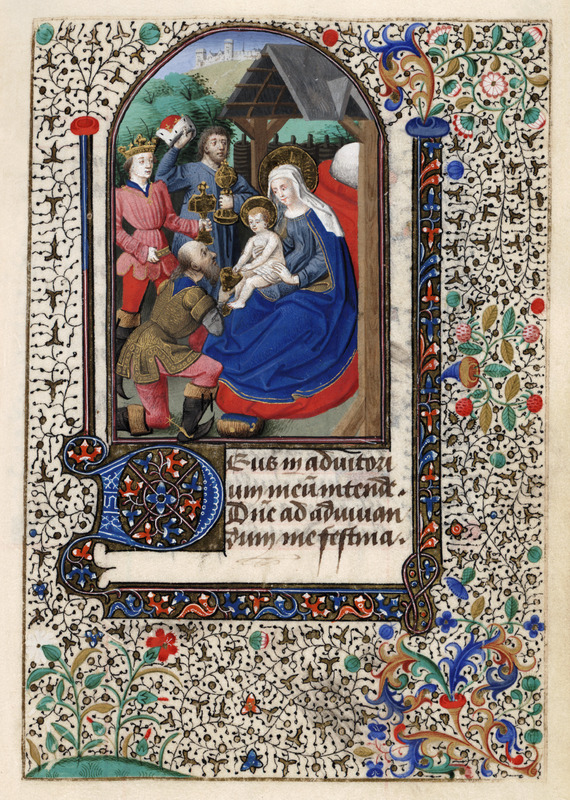 Books of Hours were the most popular form of private devotion to be found at the close of the Middle Ages. They were principally used by laity wishing to participate in the prayer of the church, but from the privacy of their own homes and according to their more flexible domestic schedules. It was not unusual to find unadorned copies stocked by stationers and ready for sale. The more deluxe items, such as the Viefuille Book of Hours, however, would certainly have been commissioned works. This manuscript originally belonged to the fifteenth-century Hôtel Dieu nun, Sister Jeanne de Viefuille. Opulent in its decoration and binding, it is certainly not representative of all Books of Hours produced during this period. The illuminated miniatures follow the standard programme for devotional illustrations in Books of Hours including portraits of the four evangelists and familiar scenes from the Christmas story including the Annunciation to the Virgin, the Visitation, the Nativity, the Annunciation to the Shepherds, the Visit of the Magi, the Circumcision, and the Flight into Egypt. They were probably painted by an anonymous artist known as the Master of Jean Rolin II who collaborated with many of the best-known illuminators of the day, such as the Bedford Master and Maître François, though he appears to be solely responsible for the miniatures in the Viefuille Hours. 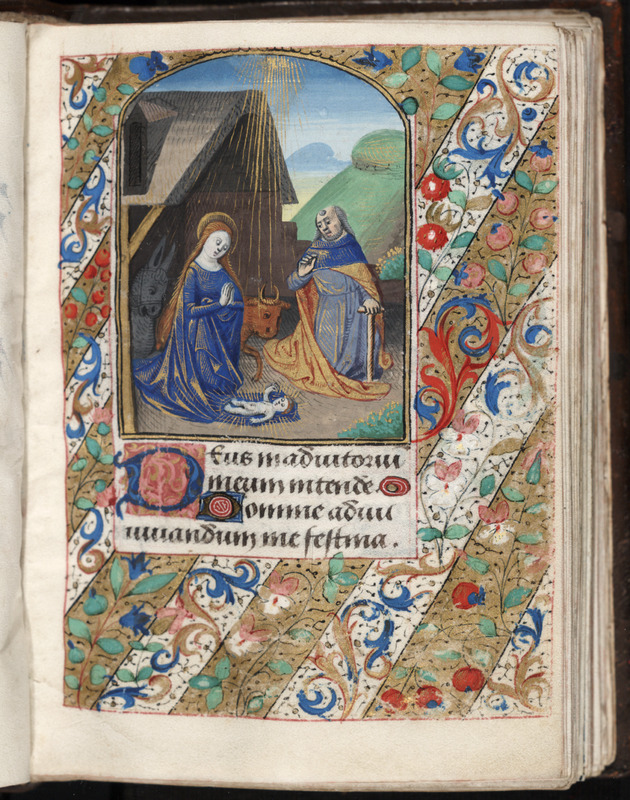 Like the Viefuille Hours, this lovely small prayer book is written in a bâtarde script throughout. Particularly striking are the twelve surviving illuminated miniatures, each of which is housed in an arched compartment, on parti-coloured liquid gold ground with birds, acanthus leaves, flowers, and gilded foliage decoratively surrounding each one. They are rendered in the late medieval style of the Maître François who was active in Paris between the years 1462 and 1480 and may in fact be identified with the artist François Le Barbier. The images are sightly more naïve than those found in the Viefuille Hours, but they are evocative in their own way and would have served the devotional purpose for which they were intended very well. 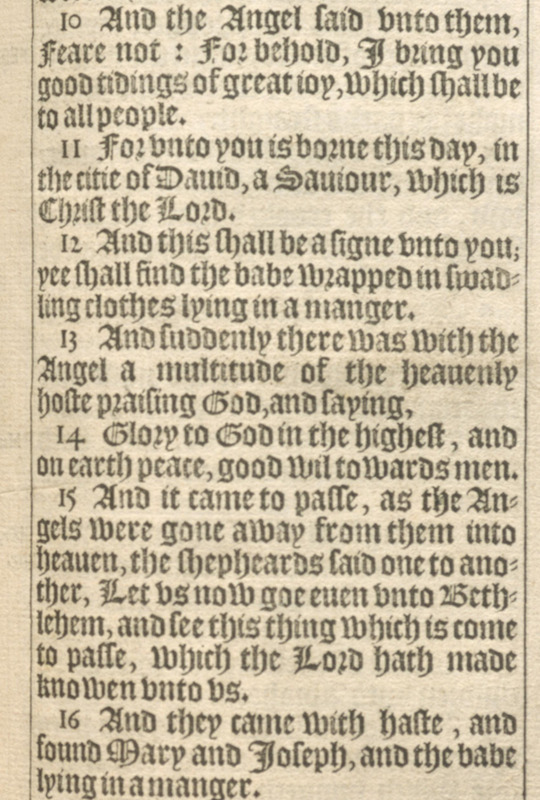 The Holy Bible, conteyning the Old Testament, and the New. London: Robert Barker, 1611.

The King James Bible, first printed in 1611, has been described as the only work of art ever created by a committee. The translators who designed this Bible understood that it was meant to to be read, not silently, but in public worship and so, before giving final approval to a translation, the committee members actually read the text aloud to each other, listening for what T.S. Eliot later called ‘the auditory imagination’, that ‘feeling for syllable and rhythm, penetrating far below the conscious levels of thought and feeling’. 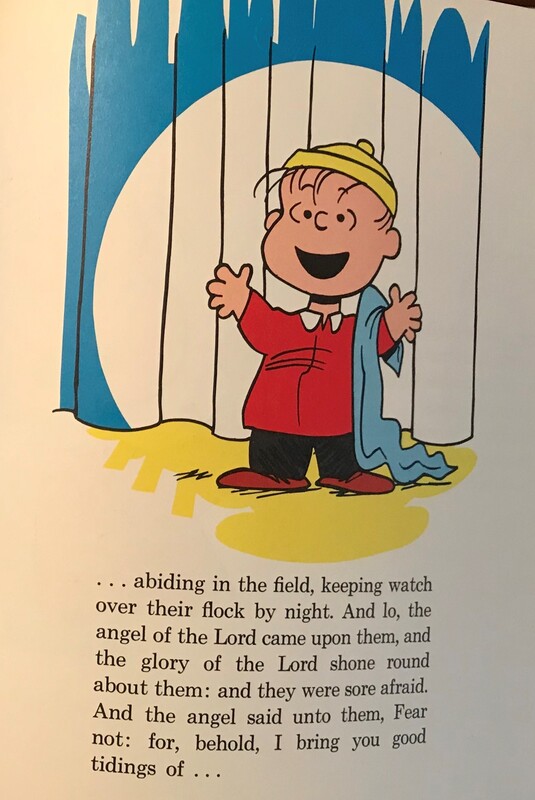 It is prose that has a rhythm that can almost be conducted like music. Certainly, the account of the birth of Jesus, as told by St Luke, is best known from this remarkable edition and sounds just as inspirational whether read from an exalted pulpit or, as in Charles Schulz’s A Charlie Brown Christmas (1965) by Linus, taking centre stage in a school gymnasium. The Fisher copy of the KJV is a so-called ‘He’ Bible (based on an error in the Book of Ruth), and is generally acknowledged to be the true first edition. 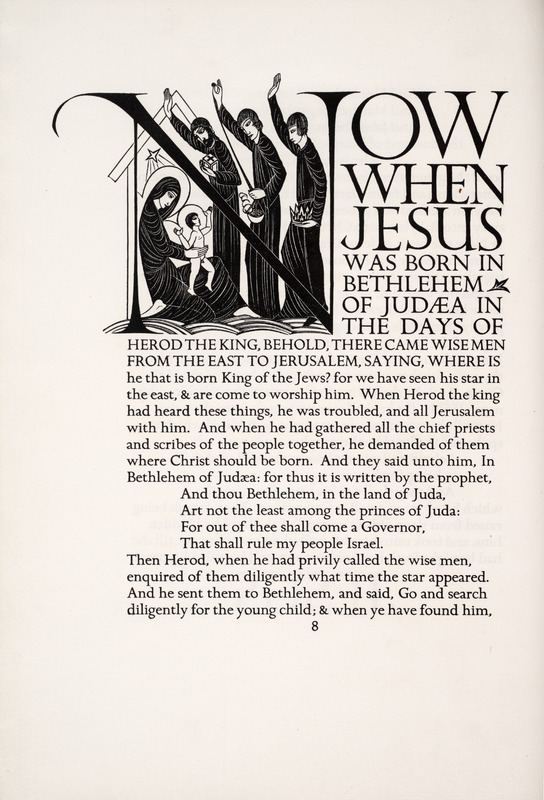 The Four Gospels of the Lord Jesus Christ. Waltham Saint Lawrence, Berkshire: Printed and published at the Golden Cockerel Press, 1931.

This beautiful copy of the four Gospels was the collaborative result of some of the greatest book artists of the early twentieth century.  Limited to five hundred copies, it was illustrated with decorations by Eric Gill (1882-1940).  Chapter and verse enumeration are eliminated from the text, restoring a sense of narrative flow to the Authorized Version of the Gospels.  It was the first book printed in the eighteen-point size of the new Golden Cockerel face that had been designed by Gill and bound by hand by the firm of Sangorski and Sutcliffe. Many scholars maintain it represents the summit of the early fine press movement. Particularly striking are Gill’s woodcuts which display a great deal of movement against open, white spaces. This illustration of the ‘Visit of the Magi’ in the Gospel of Matthew is but one of the fifty-eight principal engravings he executed for the book between 13 December 1930 and 21 October 1931.