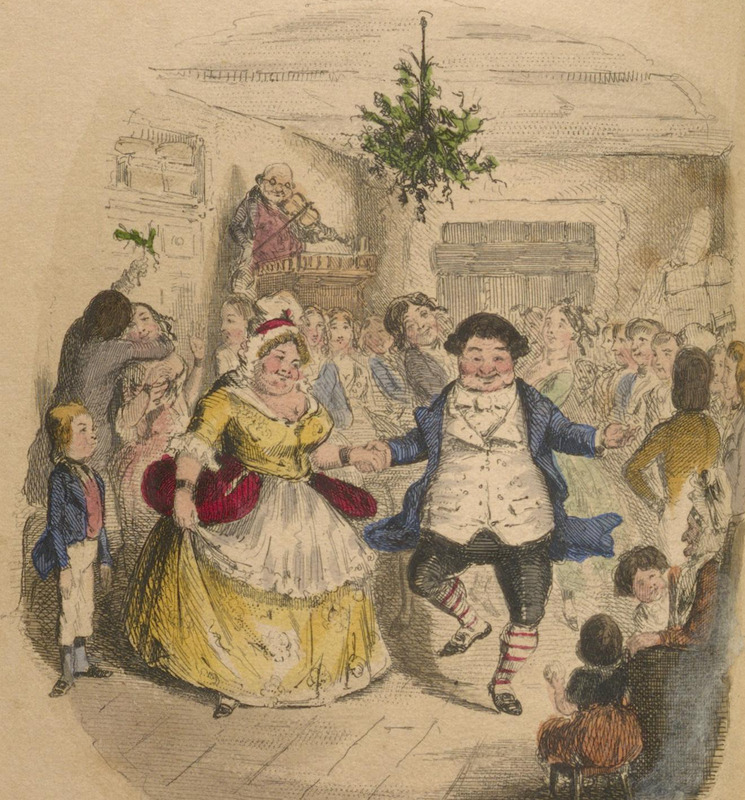 "The Fezziwig Ball" from A Christmas Carol by Charles Dickens, 1843

After the Bible, arguably the oldest Christmas stories have their origins in the mystery plays of the Middle Ages, long before literacy was common. Yuletide drama, songs, and oral tradition did not give way to the actual writing and recording of Christmas stories until centuries later. In the English-speaking world, it begins in earnest in the nineteenth century, reaching its zenith, in many ways, with the series of Christmas stories offered by Charles Dickens. 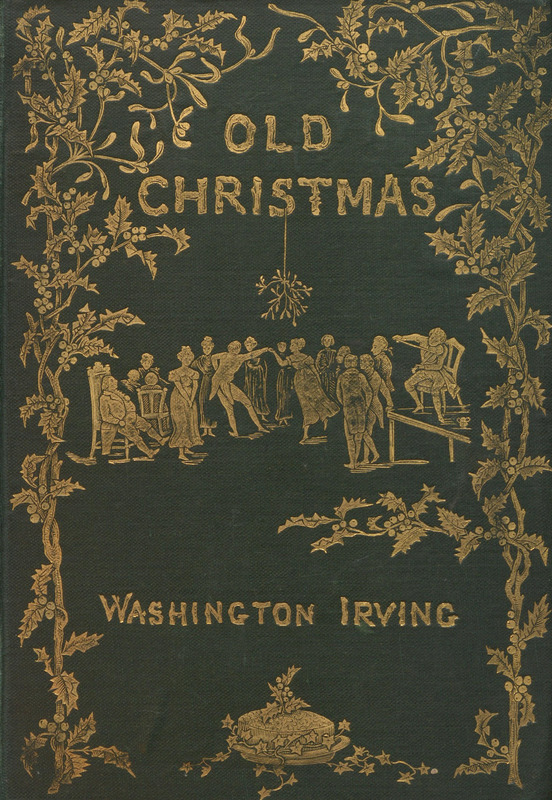 The text of Old Christmas first appeared as five chapters in Washington Irving’s Sketchbook of Geoffrey Crayon, Gent., published in 1819-1820. The classic work that contained ‘Rip van Winkle’ and ‘The Legend of Sleepy Hollow’ preceded Dicken’s Christmas Carol by nearly a quarter of a century. Its publication helped to nurture the observance of the Christmas holidays in the United States by offering the account of one American’s travels through England at Yuletide. A chance meeting with an old friend leads to an invitation to experience Christmas in a stately manor house where he participates in the uniquely British customs and celebrations of Christmas as they might have been experienced during the Middle Ages, rather than in the early nineteenth century. This 1876 edition sports a publisher’s binding of dark green cloth-covered boards with gilt embossed lettering and decoration on front cover and spine. As the preface notes, the artist Randolph Caldecott worked together with the engraver, James D. Cooper ‘to carry out the principle of the Sketch Book, by incorporating the designs with the text … con amore’. 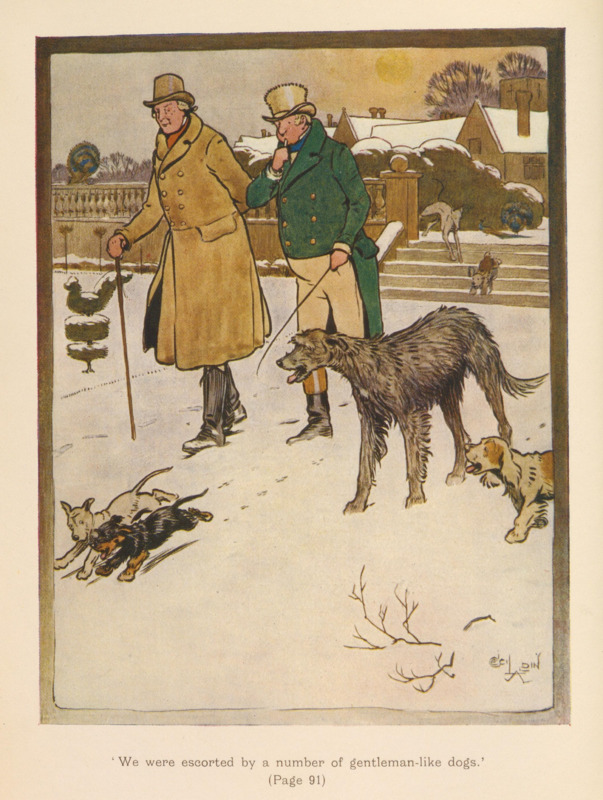 The beautiful illustrations accompanying this edition of Irving’s classic were executed by Cecil Aldin (1870-1935), a British artist best known for his paintings and sketches of animals, sports, and rural life. Among Aldin’s influences was Randolph Caldecott (1846-1886), who was responsible for the illustrations in the 1876 edition.

This pamphlet form of Irving’s story contains only the first two chapters of the tale, namely the preface and details of Crayon’s stagecoach journey through the English countryside. The illustrations are by the British artist H.M. Brock (1875-1960), most of whose pictures appeared in classic Victorian and Edwardian fiction. In addition, he produced posters and other advertising materials for the famous D'Oyly Carte Opera Company. 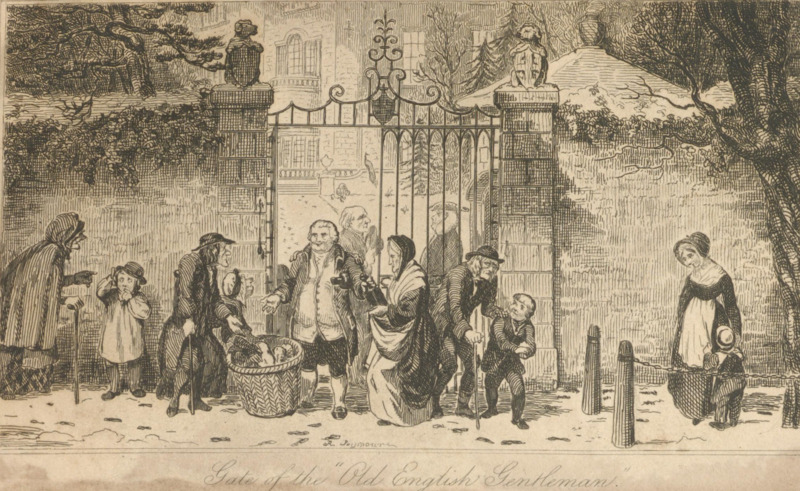 Thomas Kibble Hervey was born in Paisley, Scotland, but raised in Manchester, England. Although he studied law at Cambridge, he was never called to the Bar, and turned his attention to literary endeavours instead, becoming a leading contributor to a number of journals. This book is probably more noteworthy, however, for the illustrations executed by Robert Seymour (1798-1836). They provide an interesting sampling of Christmas festivities from before the reign of Queen Victoria who, together with her husband Prince Albert, would establish the modern customs still associated with the holidays throughout most of the English-speaking world. Particularly amusing is the illustration of the maid struggling as she makes her Christmas pudding. 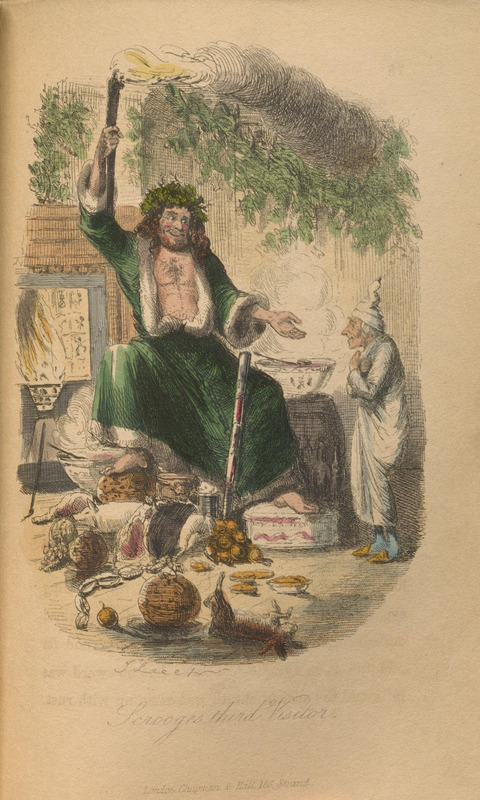 It may be argued that no book in recent history has had so direct an impact on the celebration of Christmas in its secular form as this one. The name ‘Scrooge’ has become a shorthand throughout the English-speaking world for any person who eschews participation in the holiday’s revelries. The central message of charity and forgiveness found in its pages, combined with the singing of carols and the decoration of even the most humble of homes with greenery bear witness both to the solemnity and the joy of the season, causing this book to remain a classic of literature and popular culture. The classic illustrations by Punch caricaturist John Leech (1817-1864) provided the prototypes for the characters as they would appear in later editions, as well as dramatic and film adaptations. 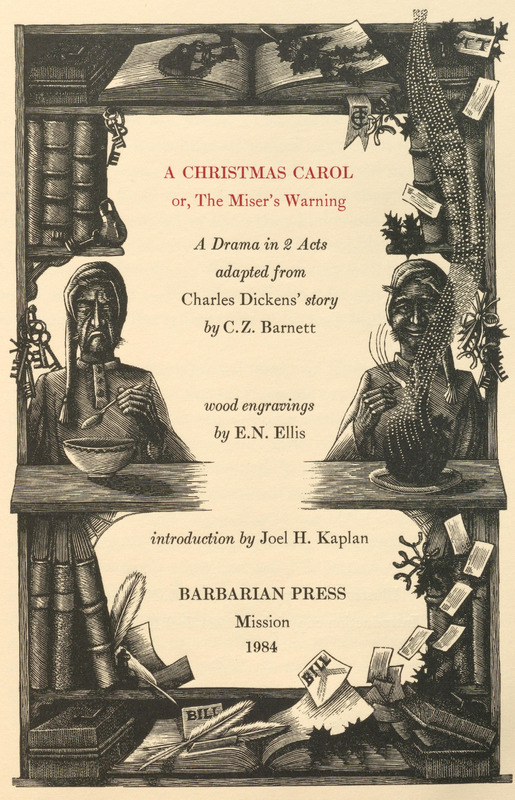 This adaptation of Dickens’ classic tale by C.Z. Barnett represents the first time that Jan Elsted of the inestimable Barbarian Press published a book with illustrations. It was also the first time that her husband, Crispin Elsted, cast type for one of their books. The dynamic wood engravings were executed by Edwina Ellis who went on to become an internationally known printmaker. In the tradition of John Leech, they continue to communicate the eerie character of the tale but with a sense of dynamic movement that is so central to the plot. 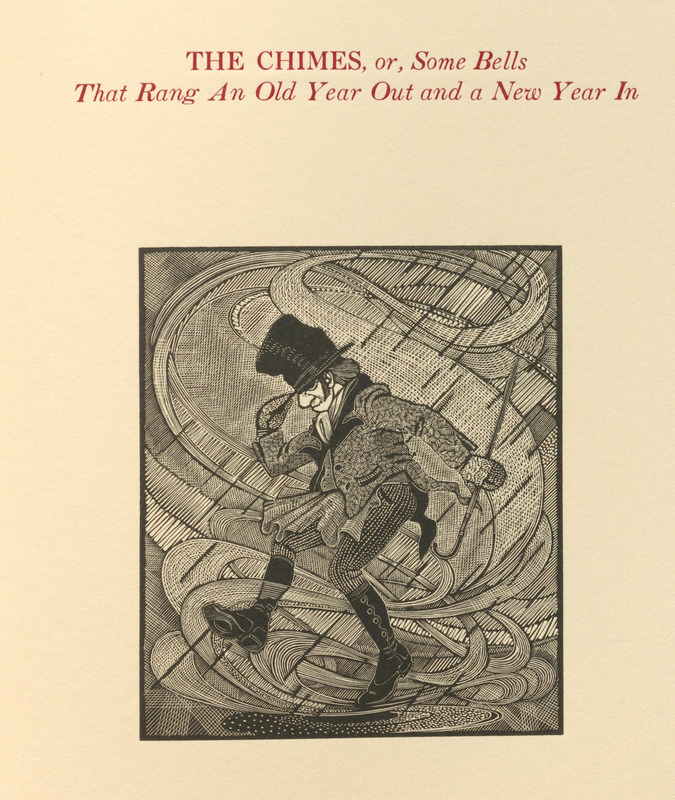 This second book from Dickens’s pen for the festive season was first published in 1844, the year after the great success of A Christmas Carol. In the same year, the novella was adapted into a play by Punch’s founding editor, Mark Lemon (1809-1870) and humourist Gilbert Abbott à Beckett (1811-1856) and performed in the Adelphi Theatre, London. The narrative stretches over New Year’s Eve and Day, and once again focuses on the pressing need for the development of a social consciousness in post-Industrial England. This fine Barbarian edition was published with wood engravings by Welsh artist Colin See-Paynton. 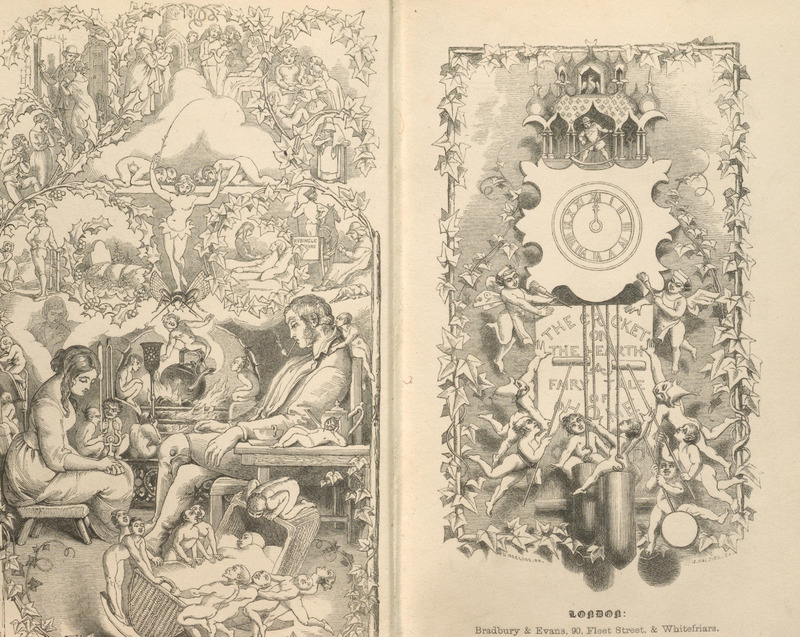 After the enthusiastic reception of A Christmas Carol in 1843, Dickens issued four more Christmas novellas in subsequent holiday seasons, with the central message of charity and forgiveness common to all. The work is divided into chapters Dickens called ‘Chirps’ and was illustrated by Daniel Maclise (1806-1870), Richard Doyle (1824-1883), Clarkson Stanfield (1793-1867), John Leech and Edwin Henry Landseer (1802-1873). Although the title page reads ‘1846’, it was in fact released on 20 December 1845, a common publication and marketing practice in the Victorian era to make the best of the Christmas shopping rush. The story was a great success and rapidly appeared in a second edition. Over the past century and a half, it has been adapted numerous times for both stage and screen. 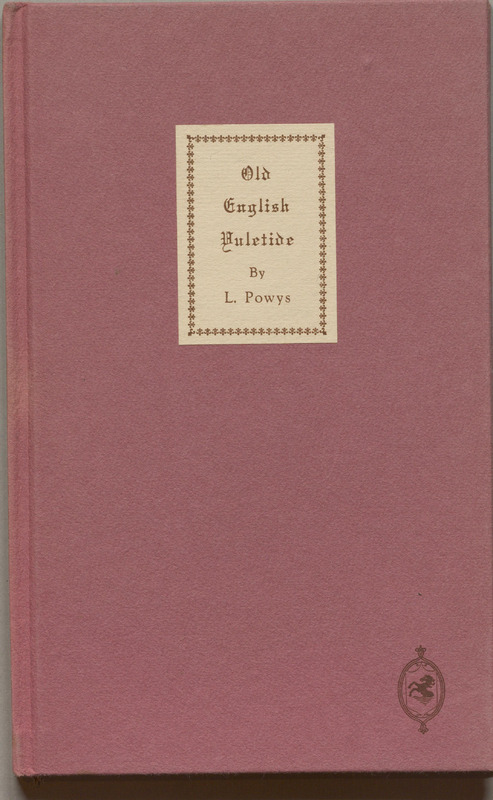 The Trovillion Private Press was established in 1908 by Violet and Hal Trovillion, in the spirit of Thomas Bird Mosher (1852-1923), the first great American exponent of the British Aesthetic Movement associated with the Pre-Raphaelites. This book of Christmas reminiscences by the great English essayist Llewelyn Powys was issued in an attractive printed slipcase, using a simple combination of red, green, and silver inks.

Early in the nineteenth century, publishers of magazines and periodicals began to introduce the ‘Christmas Annual’, hoping to tap into the increasingly important Christmas and New Year markets. The stories and poems contained in these publications were often sentimental in character, reflecting the character of the season, though not topically Christmas in general. The content, which was largely directed towards women and children, was very heavily influenced by the tastes associated with the emerging middle class, and tended to promote domestic scenes of home, family, and childhood. They were frequently illustrated using steel engravings or woodcuts, and they proved to be extraordinarily popular. It is believed that the first such annual was Forget-Me-Not which was published in Britain in 1823. The Fisher’s earliest example dates from 1829 and is entitled The Christmas Box: An Annual Present for Young Persons which was edited by T. Crofton Croker (1798-1854). As the century drew on, the writing became more literate and elevated in style, and even attracted contributions from established authors, as well aspiring ones. A Canadian Christmas annual called The Maple Leaf first appeared in 1847, with various iterations appearing sporadically throughout the latter part of the nineteenth century, issued by different editors and publishers. The contents remained largely the same: poetry, short stories, and historical overviews that were intended to help readers while away the Christmas season.