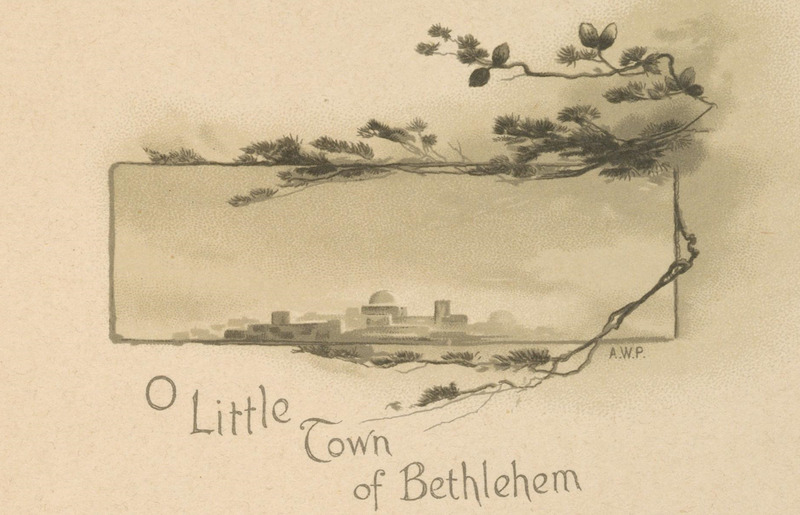 Detail from O Little Town of Bethlehem by Phillip Brooks, 1887

The singing of carols and songs at Christmas has its roots in the report of angels singing over Bethlehem in the Gospel of St Luke. Chants for the liturgical celebration of Christmas certainly date back to the early Middle Ages, while the number of carols that can be traced back to medieval times grows as researchers delve more deeply into the scattered archives of that period. In the English-speaking world, the singing of carols rebounds after the restoration of the monarchy in 1660 and expanded considerably in the nineteenth century. A representative sampling of the Fisher’s French and English holdings suggests the richness of this holiday tradition in print. 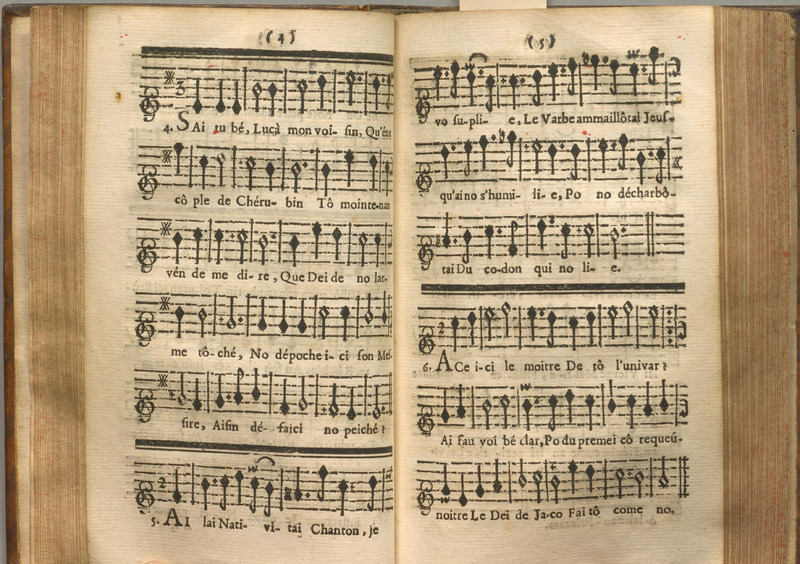 The French carols in this book were all written in the Burgundian dialect by Bernard de La Monnoye, poet, essayist, and member of the Académie française, who wrote under the pseudonym ‘Gui Barôzai’. De La Monnoye was responsible for twenty-nine carols in total, the most famous of these being, ‘Pat-a-pan’ (originally called Guillô, pran ton tamborin), which appears here both in verse and in lyric form with music. The author also wrote serious treatises under his own name and contributed extensively to Pierre Bayle’s Dictionnaire. The Fisher has an extensive collection of French Noels, numbering more than three hundred publications. 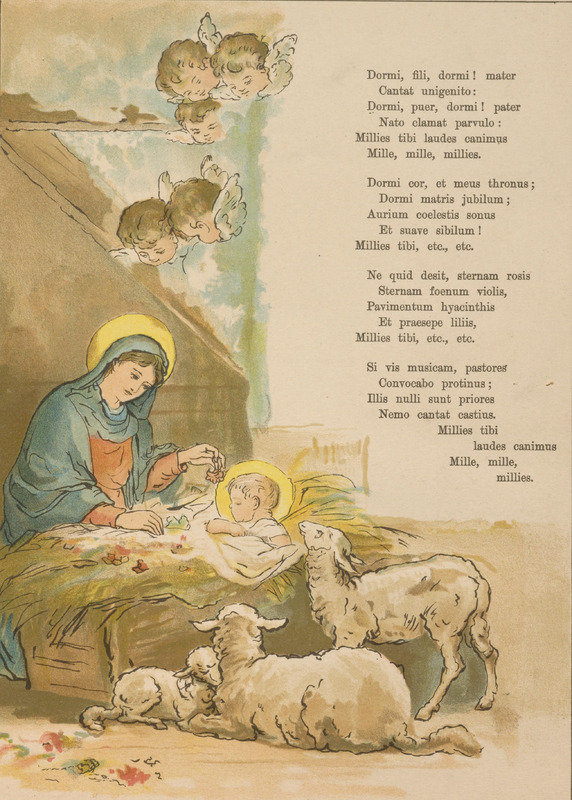 In 1871, Reinhold Herman emigrated from his native Germany to New York, where he worked as a teacher of music and orchestra conductor. From 1884 until 1917 he moved between Manhattan, Berlin, and Boston, practising his craft and directing musical ensembles such as the Handel and Haydn Society. He provided the music for this book of lullabies, together with illustrations executed by Walter Satterlee (1844-1908). Satterlee was a member of the American Water Color Society and of the New York Etching Club. 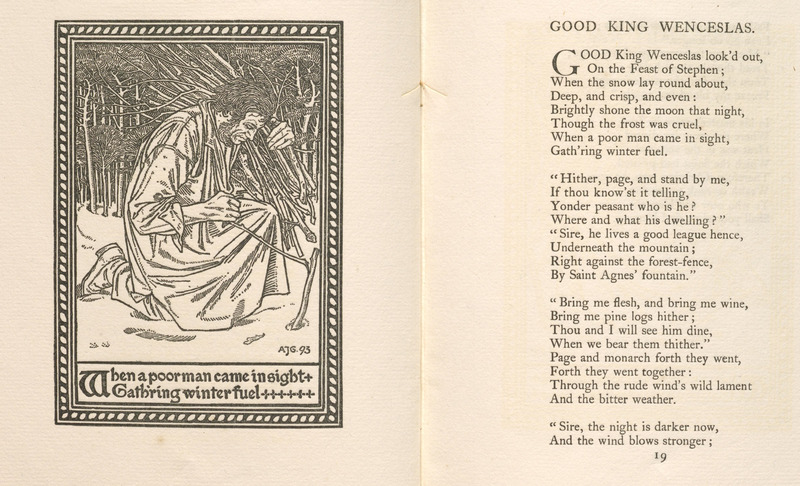 This beautiful book of carols was designed and executed by members of the Birmingham Art School, and shows the distinct influence of William Morris (1834-1896), Edward Burne-Jones (1833-1898), and other Pre-Raphaelites. The carol on display, ‘Good King Wenceslaus’ is accompanied by a woodcut designed by the English stained-glass artist Henry Payne (1868-1939) and cut by Bernard Sleigh (1872-1954). The book represents an early triumph of the Arts and Crafts Movement in Britain. 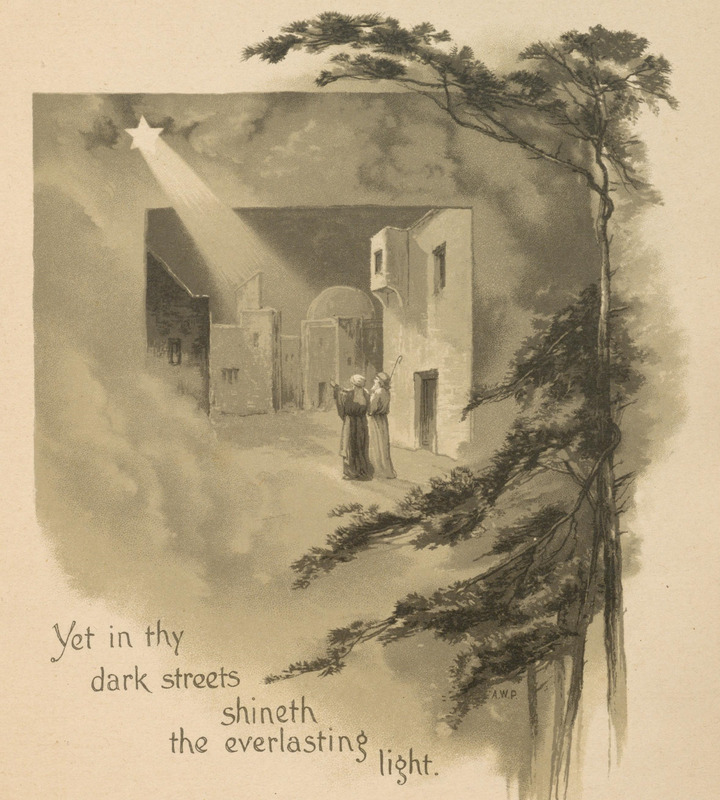 The Episcopalian priest, Phillips Brooks, wrote this beloved Christmas carol in 1868 for his Sunday School students at the Church of the Holy Trinity in Philadelphia. It was inspired by a visit he had made to Bethlehem in 1865 and conveys something of the awe he personally experienced standing in the ancient village in which Christ is believed to have been born. Its popularity spread rapidly throughout the English-speaking world and to this day is sung according to several different tunes, although the original tune, written by the parish organist Lewis H. Redner, assured the carol’s initial popularity. It was first published in 1874 in the hymnal, The Church Porch, and thirteen years later in this beautiful format with lithographed monotints printed by Ernest Nister (1841-1906) of Nuremberg, Germany. Brooks became Bishop of Massachusetts in 1891. 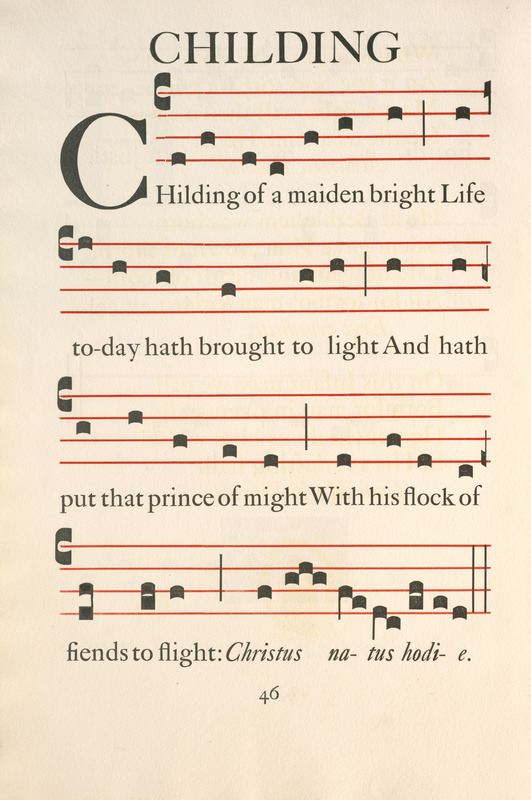 Only ninety-five copies of this beautiful volume of Christmas chants, issued on the grand scale normally associated with late medieval antiphonals, were printed by the St Dominic Press. The Guild of St Joseph and St Dominic was established in 1907 by a group of Roman Catholic artists and craftspeople inspired by the Arts and Crafts Movement. It operated until 1989. Besides the fine music type used in this volume, the book also includes woodcuts, some hand-coloured, by such great artists as Eric Gill, David Jones (1895-1974), Desmond Chute (1895-1962), and Philip Hagreen (1890-1988), who were members of the Guild. 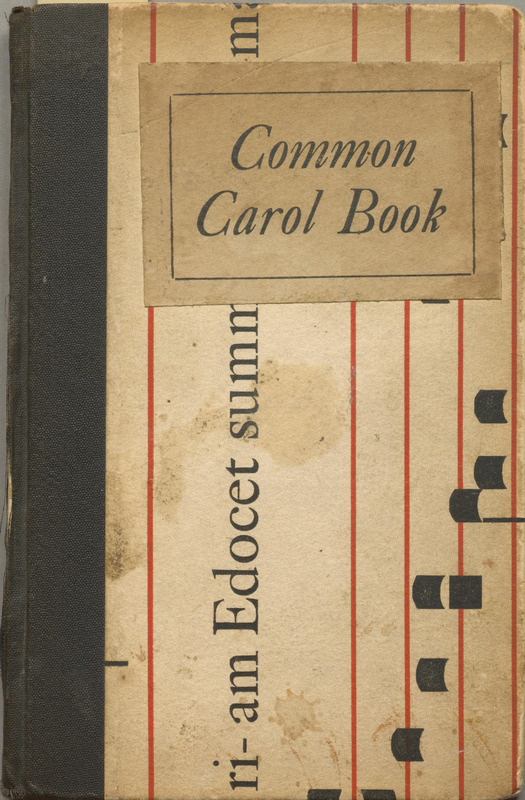 Printed in the same year as the Cantica natalia, this collection of Christmas chants was issued in a limited edition of 225 copies. The portable handbook format reflects the fact it was intended for the use of ‘The Common Carol Singers’ and includes hymns for Christmas and Easter. The wood engravings were executed by Eric Gill and artist-poet David Jones and the book is covered with printer’s waste from the Cantica natalia. 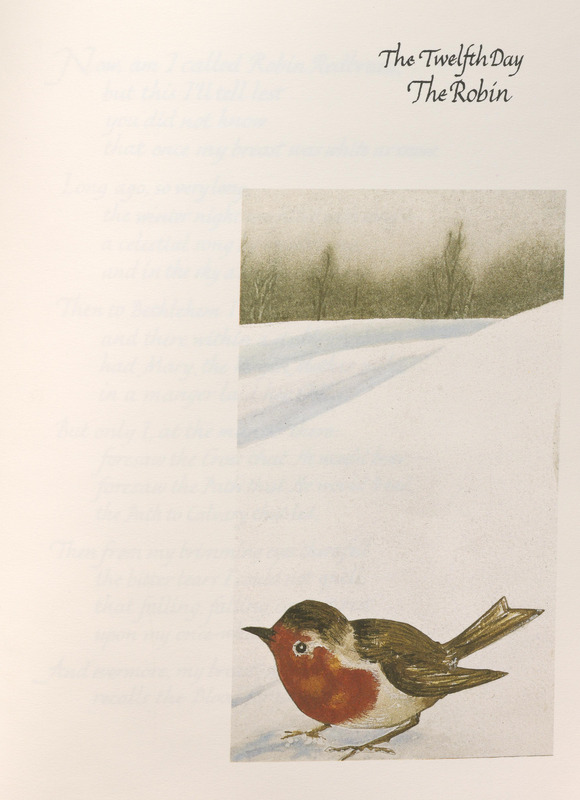 Margaret and Geoffrey Tomkinson. The Barnyard Carols: The Twelve Days of Christmas as told by the Company of Barnyard Animals. [Weston, Ontario]: Privately printed, 1984.

The tradition of animals speaking in human voices at the stroke of midnight on Christmas Eve has deep roots in European folklore. The basic premise common to all such stories is that this privilege was granted them because they were the first to see the birth of the Christ child in a Bethlehem stable. Margaret and Geoffrey Tomkinson of Weston, Ontario contribute to that tradition in this offering which tells the Christmas story from the perspective of twelve animals over the period of Christmastide, from 25 December to 6 January. Originally intended as Christmas cards, the couple compiled their verses into a collection and printed 250 copies, dedicating the book to their grandchildren. Several of the poems were subsequently set to music by Toronto musicians Barry Gosse and Ruth Watson Henderson.