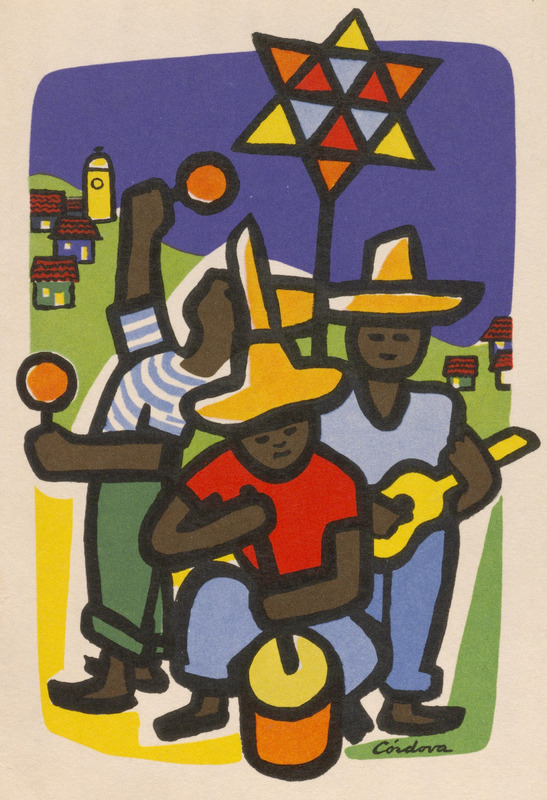 The tradition of sending Christmas and New Year greetings originated in England in the year 1843, the same year in which Dicken’s Christmas Carol was first published. As colour printing methods improved and became less expensive, and the postal system expanded, Christmas postcards grew in popularity. They are now found around the globe and feature the imagery and practices of local cultures. Most of the Fisher’s Christmas cards may be found in the library’s ephemera collections. Since the majority of past donors have come from the English-speaking world, it is not surprising that the imagery and sentiments these cards contain are distinctly Anglo-American. With the passage of time, and the development of a more multicultural society, our holdings are expanding, as can be seen, for example, in this card from mid-twentieth-century Venezuela. The cover depicts musicians playing ‘gaitas’, the traditional folk genre that has its roots in the Zulia state. The interior verse can seem deceptive at first glance, since it seems to refer to a ‘Happy Easter’. In fact, ‘Pascuas’ in the plural refers to the twelve days of Christmas ending on Epiphany. Cards from the officially atheist Soviet Union provide an interesting insight into the way the holidays continued to be celebrated there during the Cold War. The set, sent during the 1960s and 1970s by the Leningrad public librarian Boris Lvovich Kandel to his long-time correspondent David Rempel (see above in ‘A Child’s Christmas’) clearly focus on the mythic and legendary aspects of the holidays. Although the digital age is changing the ways in which seasonal greetings are now sent, the act of reaching out to friends and loved ones during the holidays remains an enduring tradition. 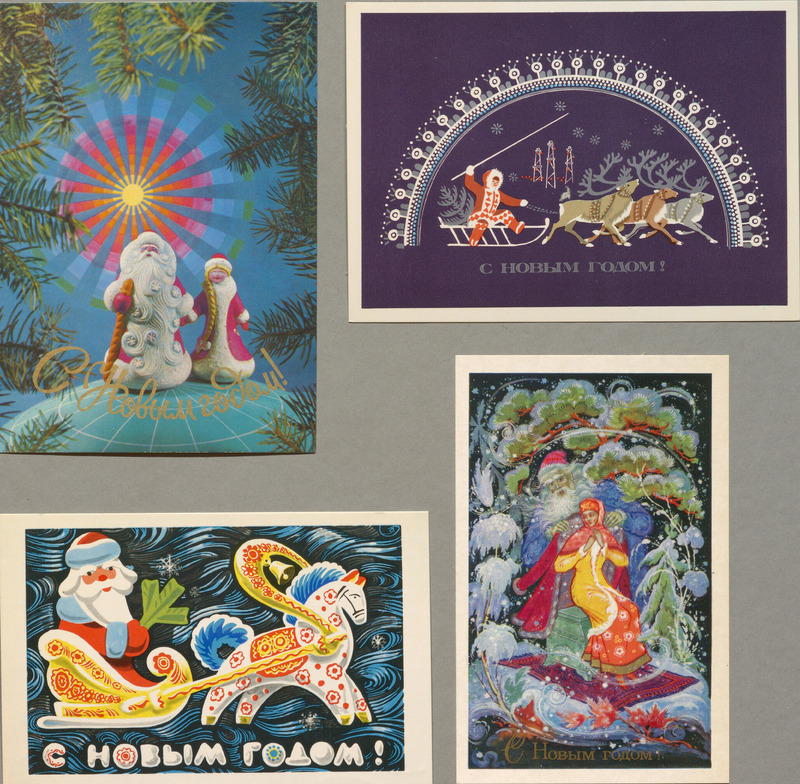 The first cards specifically designed and printed in Canada, featured here, appeared in the 1870s and 1880s. The earliest examples generally adapted the works of artists such as Krieghoff and Bartlett, and depicted a wide variety of winter activities. In 1899, a Christmas postcard could be mailed anywhere in Canada or the United States for a penny; international destinations required a two-cent stamp. By 1925, folded cards requiring envelopes grew in popularity and generally replaced the postcard in common use.

See a variety of examples in the window below 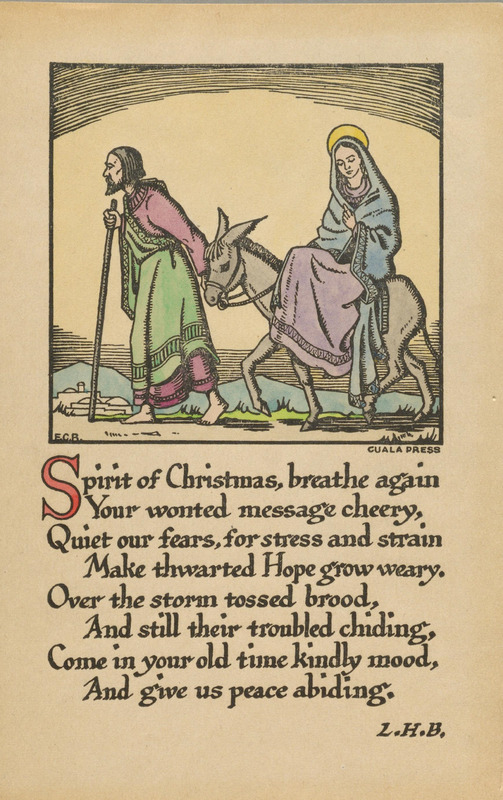 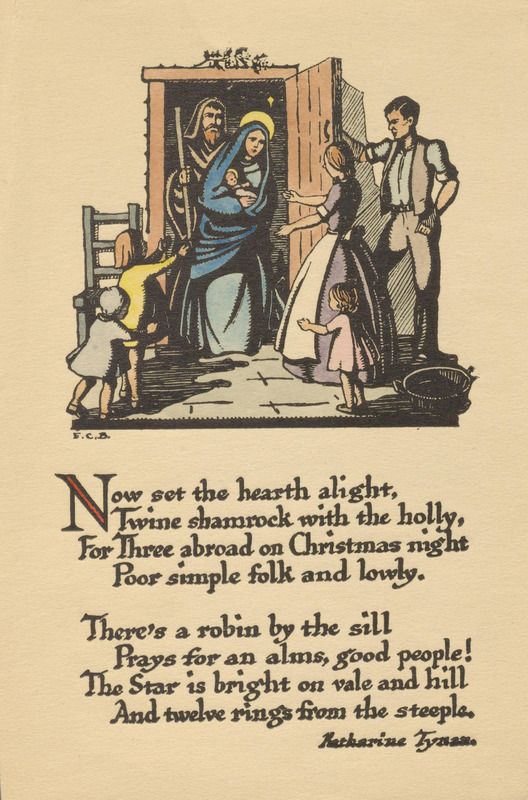 Cuala was an Irish private press established in 1908 by Elizabeth Corbet Yeats (1868-1940), sister of William Butler Yeats (1865-1939), who had trained as a printer at the Women’s Printing Society in London. Cuala played an important role in the Celtic Revival of the early twentieth century, publishing the works of such writers as Yeats, Lady Gregory, Colum, Synge, and Gogarty. The Cuala Christmas cards were issued with both religious and secular imagery. The two religious cards, displayed here, were designed by the artist Eileen Booth and were printed on Irish paper that had been specially made for the Press at the Saggart paper mill. They feature verses by the Irish poets L.H. Brindley and Katharine Tynan. The card depicting the Holy Family being greeted at the door by a clearly nineteenth-century Irish family harkens back to a long-standing Irish tradition. On Christmas Eve, a candle would be left burning in the cottage window to let Joseph and Mary know there was a welcome for them in the family’s home. (The custom is likely grounded in the penal times’ practice of leaving a small candle burning in the window to help outlawed priests find safe shelter.) The third card, with an image perhaps designed by Dorothy Blackham, displays no obvious Christmas imagery, but the accompanying verse by Eleanor Sinclair focuses on the close relationship between friendship and the festive season.