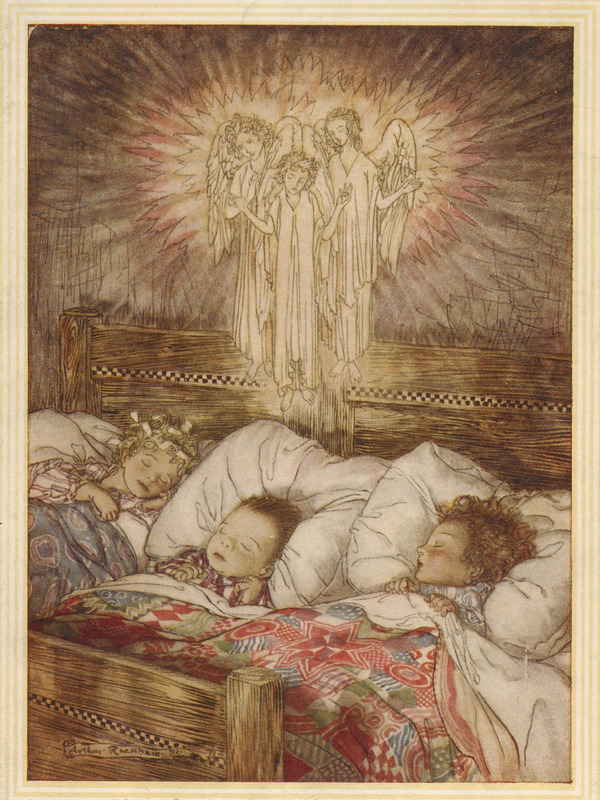 Cover of The Night Before Christmas by Clement C. Moore and illustrated by Arthur Rackham, 1942

It should not be surprising that for a festival that has the birth of a child at its very centre, literature for and about children has occupied a privileged position for at least two centuries now. The person of Father Christmas or Santa Claus, so popularized by Clement C. Moore, has ensured the wonder of childhood will always be a prominent feature during the festive season. 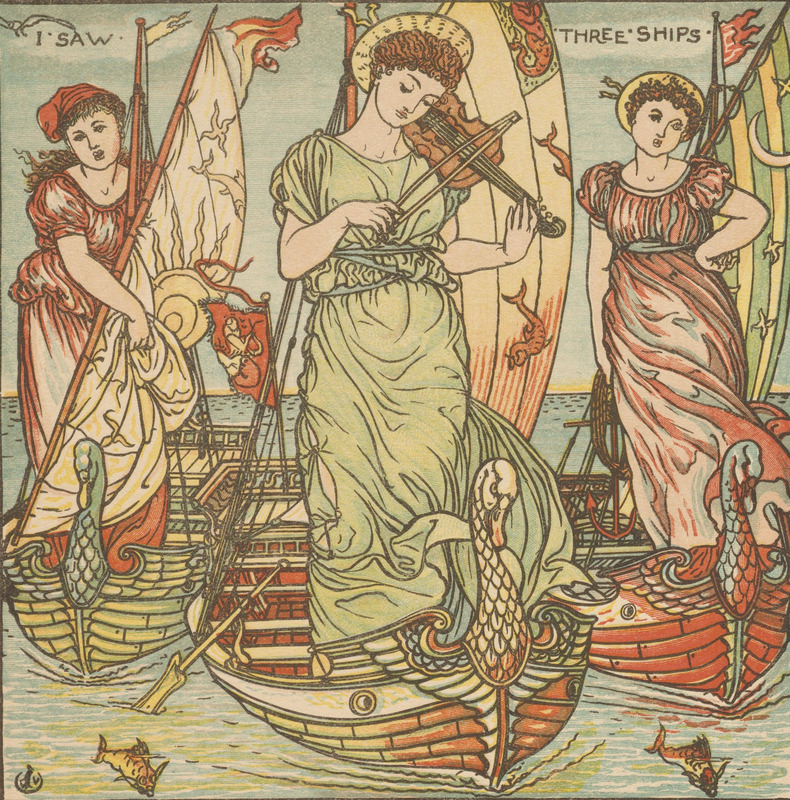 This children’s colouring book was written and illustrated by Crane and appears with coloured wood engravings by Edmund Evans (1826-1905), intended for the inspiration and imitation of juvenile owners. Walter Crane designed about forty-five toy books for various publishers between 1865 and 1886, six of which were for Frederick Warne. Displayed are the first words of the English carol ‘I saw Three Ships’, a medieval minstrel song that first appeared in print in the seventeenth century. 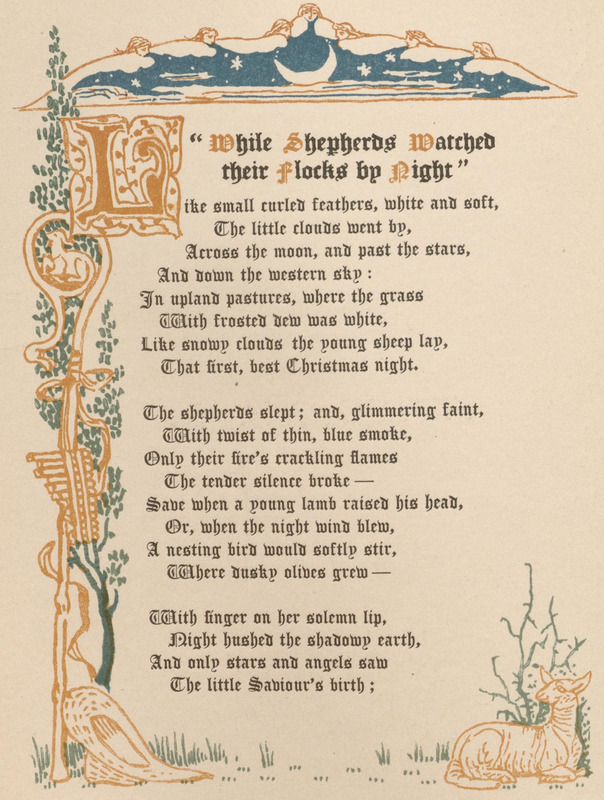 Deland’s poetry is imitative of earlier English verse, and was described at the time as ‘graceful’ with ‘no cunning devices of the artist to commend them’. She became one of the best-known American short story authors and was the second woman admitted to the National Institute of Arts and Letters. The illustrations were executed by Walter Crane. 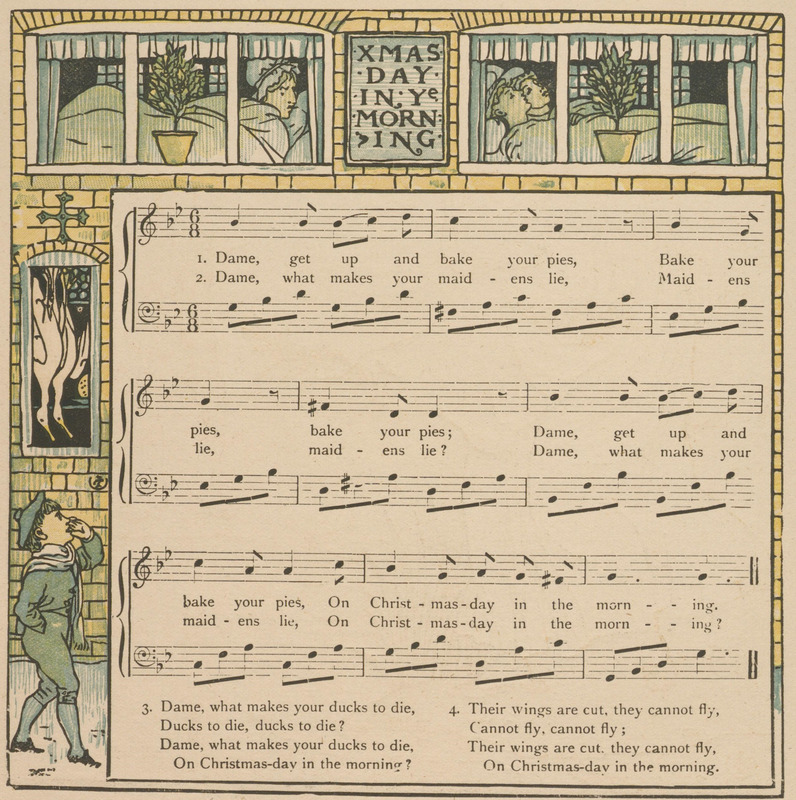 Crane was a member of the Arts and Crafts movement that flourished at the turn of the twentieth century in Britain and North America. Besides his children’s books, he was also known for his ceramic tiles and other decorative arts. This toy book was produced in conjunction with Edmund Evans (1826-1905) whose chromoxylographic engraving technique revolutionized book illustration by enabling cost-effective printing in colour. 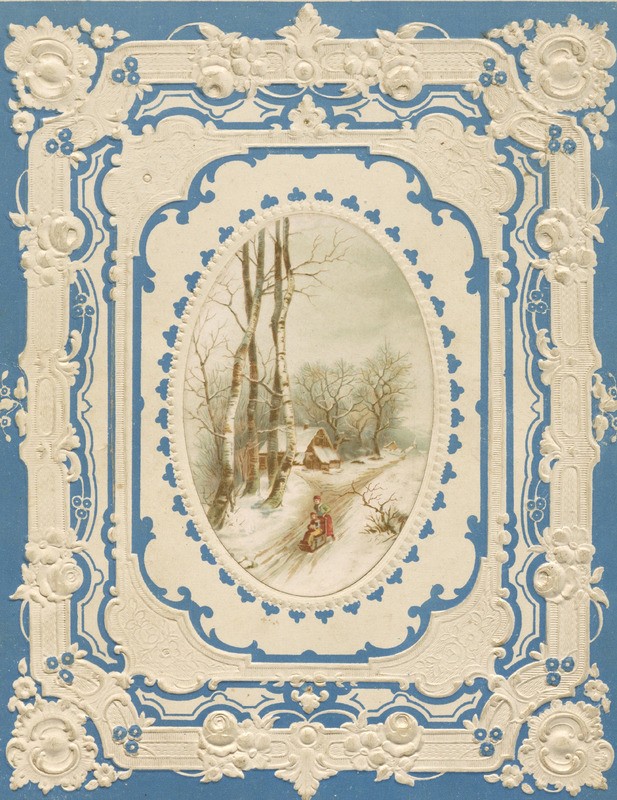 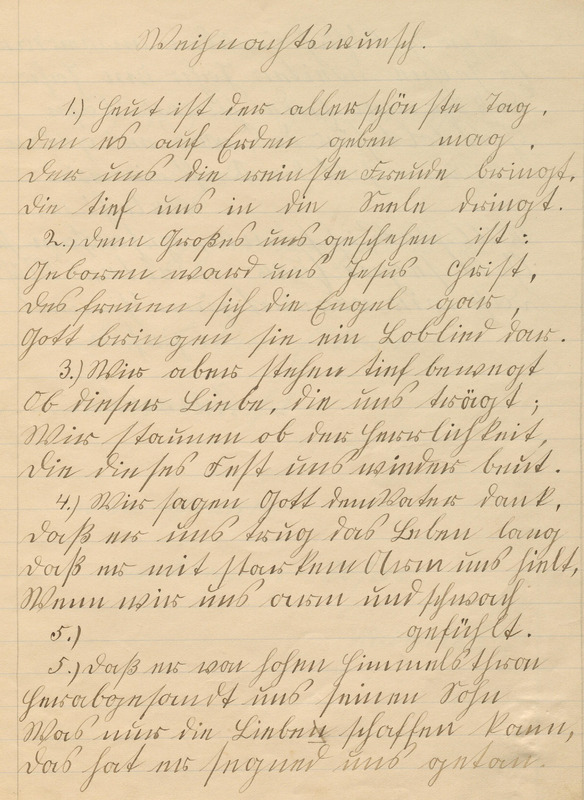 David Rempel (1899-1992) was born in Khortitsa, a German-speaking Mennonite colony in the Southern Ukraine and came of age during the Russian Revolution. He and his siblings immigrated to southern Saskatchewan in 1923, escaping the depredations of the new Soviet regime in their native territory. He spent his career in Canada and the United States as a historian and teacher, dedicated to the preservation of the vanishing culture of the Mennonites in Russia and Ukraine. Among the books he brought with him from his homeland were these scribblers, created by him and his siblings while they were still children in Nieder-Chortitza. Poems, carols, and songs were carefully copied out in school in a fair hand and then they were read aloud to visitors as part of the holiday entertainments. One of Rempel’s associates, Agatha Nickel recalls that the teacher ‘impressed upon children that the work was to be done very neatly as this was an expression of thanks for all the nice things parents had done for us. And so, we made a great effort to do this.’ The richly embossed paper covers speak to the high regard in which this custom was held by adults and children alike. Although Rempel spent most of his adult life in California, it was his wish that his papers should return to Canada, which was the first country to open its borders to the Mennonites and, as far as Rempel was concerned, had done the most to rescue his people. His records are held at the Thomas Fisher Rare Book Library, the Centre for Mennonite Brethren Studies (Winnipeg), the Mennonite Heritage Centre (Winnipeg), and Conrad Grebel University College (Waterloo). 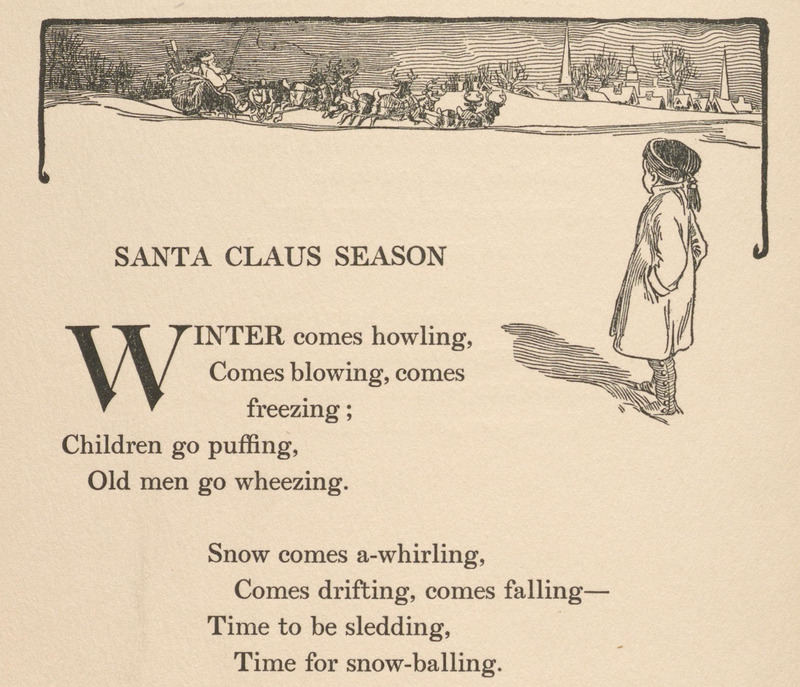 Brill was among the most beloved illustrators of turn-of-the-twentieth century America. His drawings often appeared in newspapers, especially in New York and Philadelphia. He was not particularly well-known for his drawings for children, which makes this particular book all the more interesting since he was responsible for both the text and illustrations. 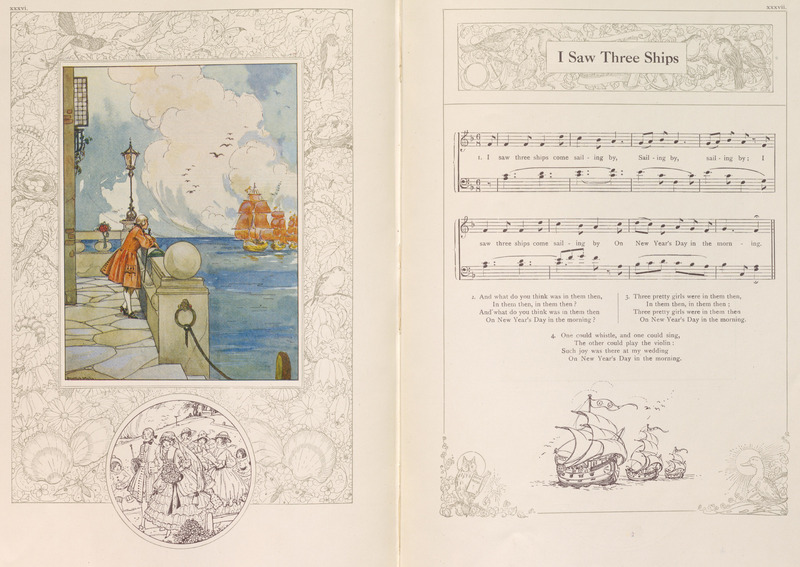 The old English carol ‘I saw Three Ships’ is reprised here with a variant text for New Year’s Day in this collection of children’s rhymes. Compiled by Walter with music provided by Lucy Broadwood, the book is most noteworthy for its sumptuous illustrations by Dorothy Wheeler (1891-1966), whose pictures also graced the pages of books by the renowned children’s author, Enid Blyton (1897-1968). 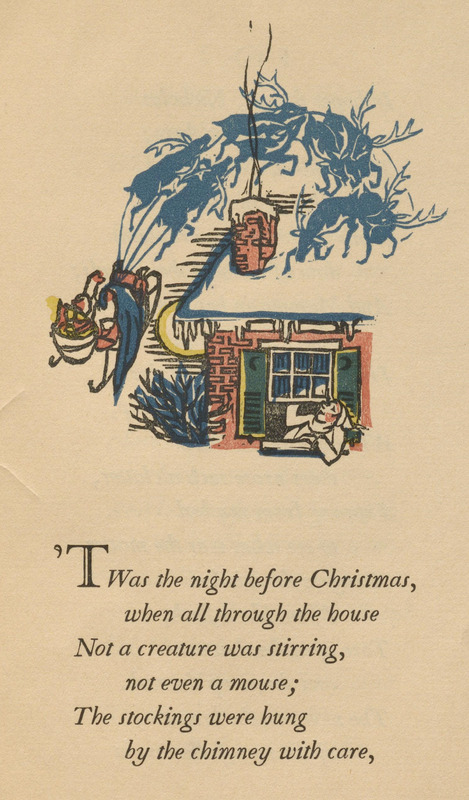 This edition of the most beloved Christmas story about Santa Claus was designed by Bruce Rogers (1870-1957), one of the foremost exponents of the fine press movement in the United States. During the First World War, Rogers worked under Emery Walker (1851-1933) at the Doves Press in London, and upon his return to America became a book designer for William Edwin Rudge (1876-1931) at the renowned Mount Vernon Press, where this book, published by The Atlantic Monthly, was among the first to be printed. The woodcuts are by Florence Wyman Ivins (1881-1948), the first woman artist to have a solo exhibition at the Metropolitan Museum in New York. 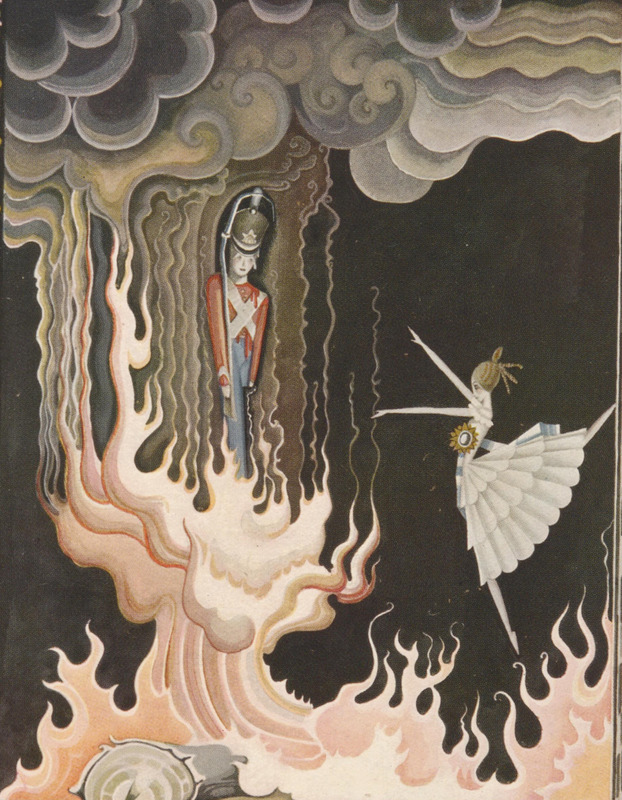 Since the appearance of Tchaikovsky’s Nutcracker in 1892, the character of the ‘Tin Soldier’ has been associated with the Christmas festivities. This illustration by the Danish artist Kay Rasmus Nielsen accompanies Hans Christian Andersen’s fable in which a ‘steadfast tin soldier’ falls in love with a paper ballerina. The iconography of the two stories, however, are almost interchangeable. Nielsen was a widely admired illustrator of children’s books. He went on to work for the Disney Corporation, where he contributed artwork to the movie Fantasia. 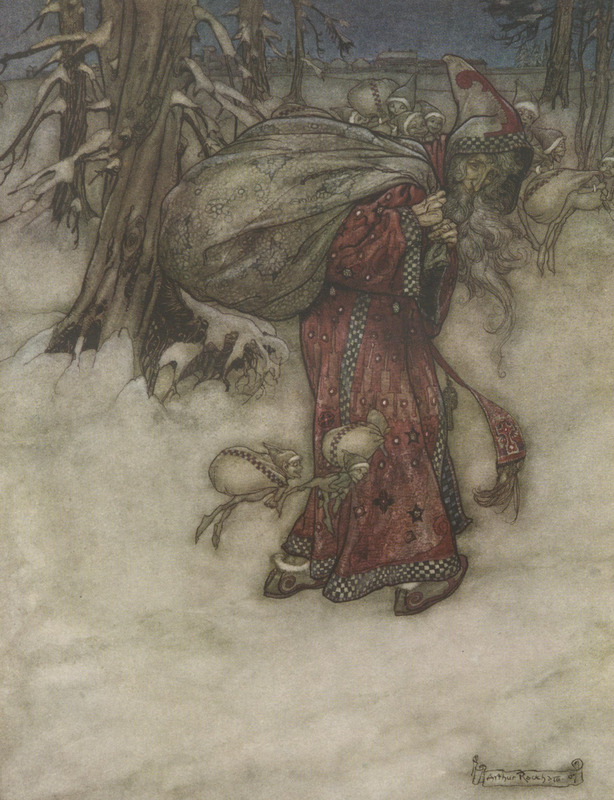 Most of the pictures in this book are unrelated in theme, with the exception that they are all works of fantasy, largely based on fairy tales. At the time of its publication, the book was praised for its apparent randomness and the dreamlike quality of the images, ‘the wayward visions that tease every true artist’s mind, while he bends over the day’s work.’ The depiction of Santa Claus here is far closer to a traditional English Father Christmas than it is to the jolly red elf who would dominate children’s imaginations throughout the twentieth century. 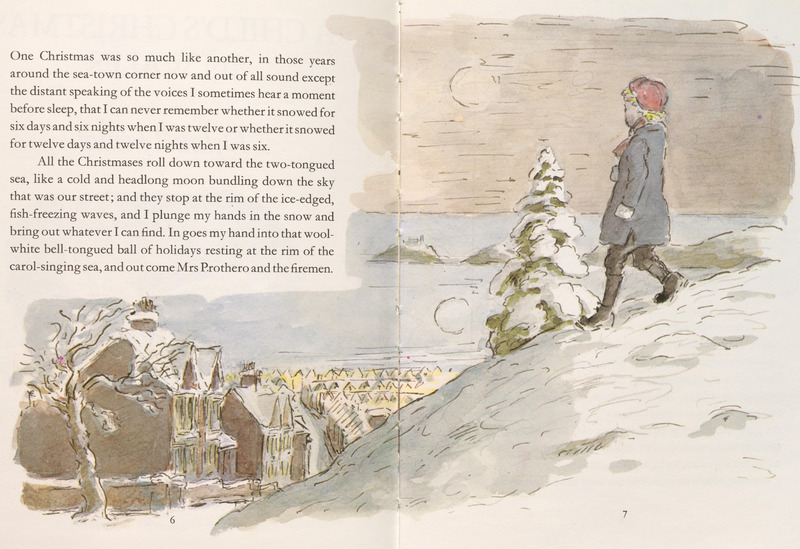 This nostalgic story of Christmas past is a compilation of two brief prose works written by the Welsh poet, Dylan Thomas: ‘Memories of Christmas’ from 1945 and ‘Conversation about Christmas’ from 1947. The two were merged and published in Harpers’ Bazaar under the title ‘A Child's Memories of a Christmas in Wales’ in 1950. A recording of the short story was made in New York in 1952 entitled ‘A Child’s Christmas in Wales’, and thus has it been known ever since. The work was not published as a monograph until 1954, a year after the poet’s death. The Fisher’s 1978 publication was richly illustrated by the renowned print maker Edward Ardizzone (1900-1979) who, in 1956, won the inaugural Kate Greenaway Medal from the Library Association for the year’s best children’s book illustration by a British subject. Though Dylan’s modern classic is set in the early twentieth century, the cast of characters that populate the story – aunts who tipple, uncles sleeping after eating too much, instructions for the assembly of toys that require an engineering degree – still resonate with Trina Schart Hyman readers today. Another beautiful edition from 1985 features the artistry of the award-winning illustrator Trina Schart Hyman (1939-2004) which is reminiscent of Arthur Rackam’s style from earlier in the century.