Part VII: The Struggle to Belong

The Intercolonial Railway of Canada, [1884?]

It has become a truism in Canadian history that we are a nation of immigrants. With the exception of the Native peoples, who thousands of years ago also came from another part of the globe, Canada’s population has grown because of those who have followed the promise that these shores have offered over the past four hundred years. It has become part of the psychology of the nation to pride ourselves on our ‘cultural mosaic’ in which the traditions of our ancestors are honoured and retained, in contrast to the model of the melting pot south of the border. The ‘hyphenated Canadian’ has long been part of that tradition. Despite that national mythology, the documents in this case demonstrate that each new wave of immigrants has struggled to belong and leave its mark on their new home. 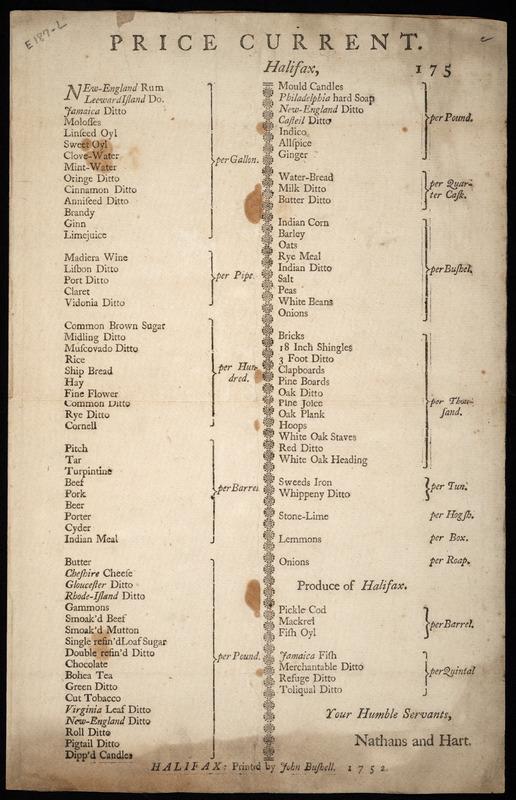 This broadside is the third recorded document printed in Canada and the oldest still to be found within the country. Nathan Nathans and Naphtali Hart were Jewish immigrants who about 1751 moved from the American colonies to Halifax where they almost immediately established a retail operation together. Their printed blank form allowed vendors to fill in prices for everything supplied by the pair from lime juice to fish, as well as building materials like bricks. Until the discovery of this document it had been believed that Aaron Hart was the first Jew to immigrate to British North America in 1763; clearly several were already living in Nova Scotia more than a decade earlier. At a time when ‘two strange Jews’ were not permitted to set up shop in Albany, New York, the town of Halifax was allowing them to ply their retail trade without requiring naturalization. 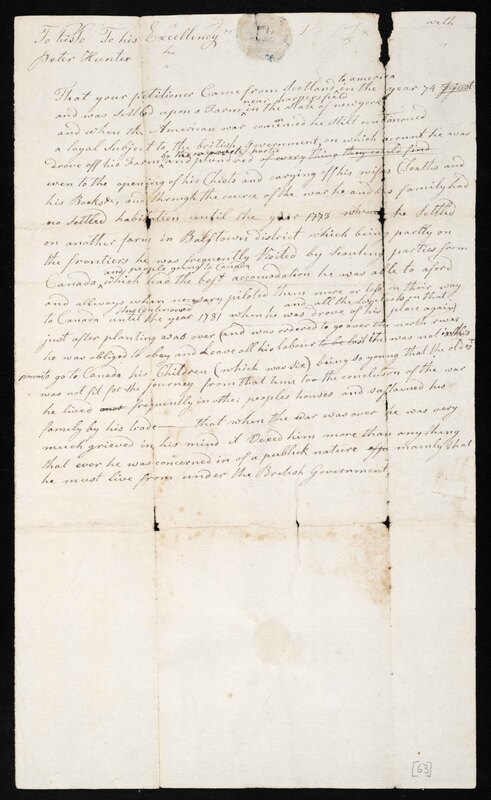 Partial Holograph Draft of a Petition by Alexander McLean to the Honourable Peter Hunter, Lieutenant-Governor of Upper Canada. [Elizabethtown, U.C., circa 1799].

The American Revolution instigated the first great wave of refugees to what would become Canada. Some 75,000 Loyalists, like Alexander McLean (1736-1810), eventually made the journey north of the border. McLean explains here that he had been driven off of his farm; his property had been ransacked; and he specifically complains about the theft of his wife’s clothing and their books. In 1781 his family fled the United States with the Niagara peninsula their final intended destination. While crossing the St Lawrence during their escape, one of their boats took on water, soaking their precious cargo of books. In order to allow the volumes to dry, they wintered near Brockville, settling there instead, within sight of the Republic they had abandoned. 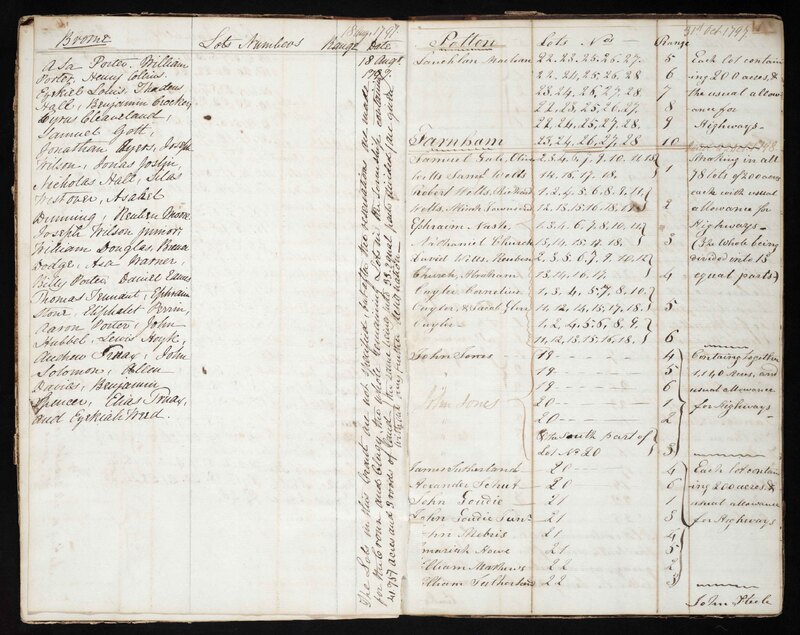 This fair copy manuscript enumerates the names of Loyalists who settled throughout the Eastern Townships of Lower Canada. Instead of assigning lands to separate individuals, as was the case elsewhere in the colony, grants in the Eastern Townships were made to a leader and his associates together. On display are the names of those who claimed territory in the Townships of Brome, Polton, and Farnham. The leader of the Brome settlement, whose name appears at the head of the list, was one Asa Porter, described in the Township’s original charter as ‘our well-beloved, late of Haverhill, in the State of New Hampshire’. After taking the oath of loyalty, Porter and thirty-two of his associates were granted land for which they assumed the responsibility of upkeep and improvement, as well as all expenses associated with the territory. 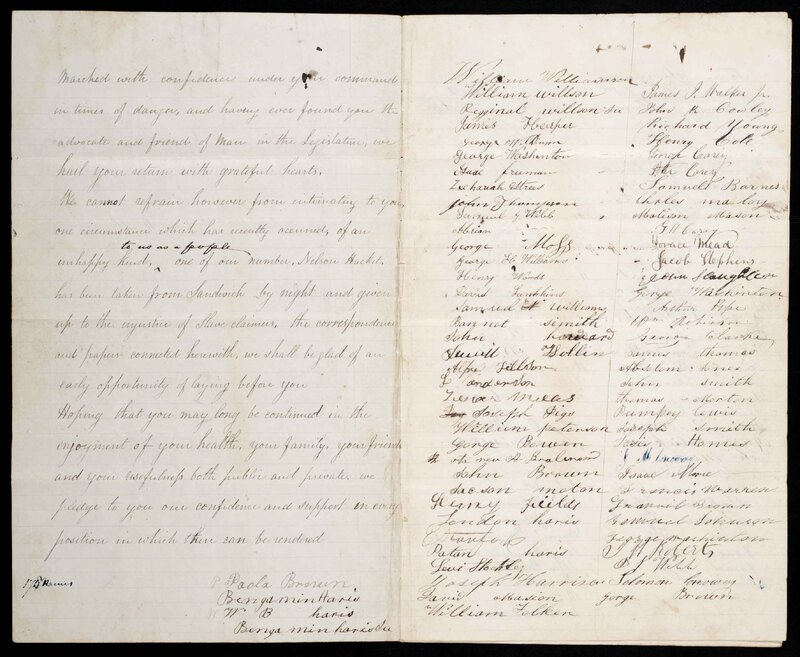 In 1793, the first Lieutenant-Governor of Upper Canada, John Graves Simcoe introduced a law restricting the rights of slave-holders, and abolishing the further importation of slaves to the colony. Thus Upper Canada became the first place in the British Empire to provide for the abolition of slavery. This petition preserves the autographs or marks of 178 Black men living in the area of Hamilton who had fled the United States by the ‘Underground Railway’. They sought the release of one of their friends, Nelson Hackett, who had been retaken by American slavers. With the approval of the newly arrived Governor-General, Sir Charles Bagot (1781-1843) Hackett was returned to Arkansas, and then sold to a settler in Texas.

Mary Conlon. Letter to her Brother written on Board the Ship Achilles en route to Canada. [At sea: 1847].

While Irish immigration to British North America steadily increased in the early decades of the nineteenth century, nothing prepared the colony for the influx that occurred during the years of the potato famine, 1845 to 1851. Over those six years about one million Irish immigrated to the New World, many of them dying on the so-called ‘coffin ships’ or in the squalid compounds established to process them on Canadian and American shores. The desperation of these new settlers is captured in this letter in which a pregnant Mrs Conlon describes her husband’s drowning after being swept overboard, and her anxiety about raising fatherless children in a strange land. She gave birth in a Québec quarantine station and then succumbed to disease together with all but one of her children. 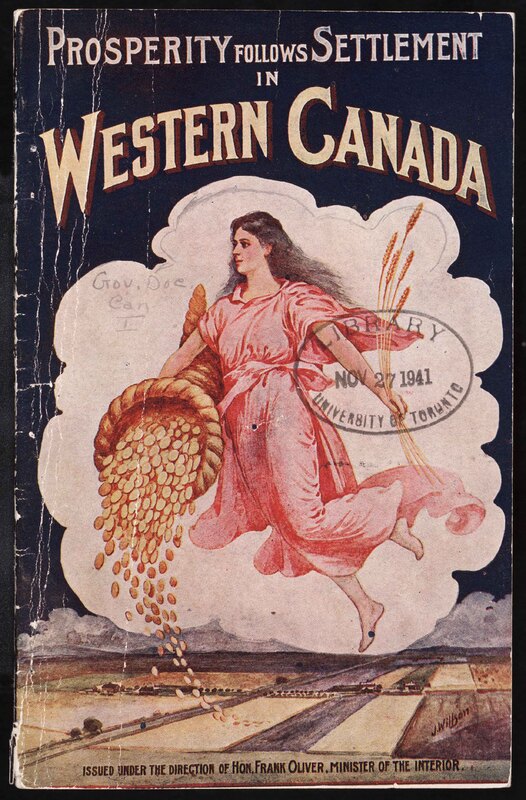 While pioneers from the United Kingdom, the United States, and Canada’s eastern provinces had begun moving west in the mid-nineteenth century, large swathes of the fertile region remained unsettled. To drive this point home, the Canadian Department of the Interior noted in this pamphlet that, although the region boasted 171 million acres of fertile land, only 5 millon were cultivated. Overlooked is the fact that much of this land was the ancestral home of various First Nations. The front cover of this publication is replete with mythological motifs and the promise of a golden land overflowing with abundance. Between 1901 and 1914, it is estimated that about a million immigrants succumbed to its inducements. Of these, a third were Germans, Icelanders, Hungarians, and Scandinavians. A multicultural Canada was being born.