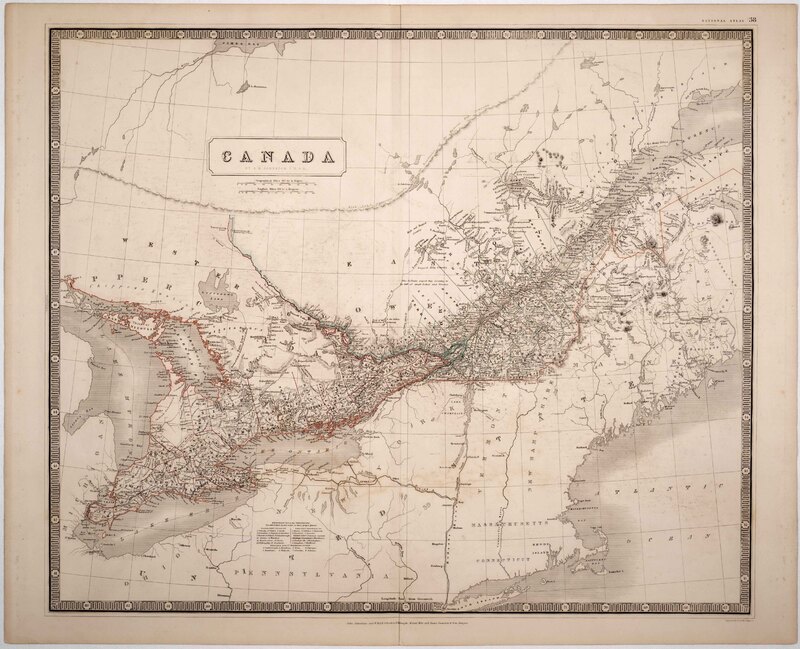 The governments of Upper and Lower Canada, Nova Scotia, New Brunswick, Prince Edward Island, and Newfoundland remained oligarchical after the American Revolution. All power was vested in the Crown and its representatives who sat on appointed legislative councils, with elected assemblies possessing little real power. By the late 1830s, however, a desire for ‘responsible government’ was spreading across British North America, eventually leading to open rebellion in both Upper and Lower Canada in 1837. Within the Canadian context, responsible government refers to a system in which executive power resides in the Crown and its ministers, with the caveat that the executive can only govern as long as it retains the conﬁdence of the people’s elected representatives. The achievement of responsible government in the colonies was fraught with challenges; but by the end of the 1840s another essential piece of the jigsaw that would be called ‘Confederation’ was in place.

This section of the exhibition focuses primarily on the ﬁght for responsible government, especially as it unfolded in the province of Upper Canada; but it is worthy of note that members of the print trade played a signiﬁcant role in that struggle in all of the colonies. For their eﬀorts William Lyon Mackenzie (1795-1861), printer of The Colonial Advocate in Toronto, was forced to live in exile in New York for more than a decade; Ludger Duvernay (1799-1852), publisher of La Minerve of Montréal ﬂed to Burlington, Vermont, and did not return home until 1842; Edmund Bailey O’Callaghan (1797-1880), editor of the Montréal Irish newspaper, the Vindicator, relocated to the United States where he died; Robert-Shore-Milnes Bouchette (1805-1879), publisher of Le Liberal of Québec was sentenced to exile in Bermuda. In total some twenty-ﬁve printers, publishers, and booksellers were among the ‘patriotes’ of Lower Canada. While no armed rebellion took place in Nova Scotia, the ﬁght for responsible government was led there by Joseph Howe (1804-1873), owner and publisher of the Novascotian.

Although the rebellions in both Upper and Lower Canada ultimately failed, they did succeed in attracting the attention of a British government loath to see its colonies, fought over twice in sixty years, lost to republicanism. 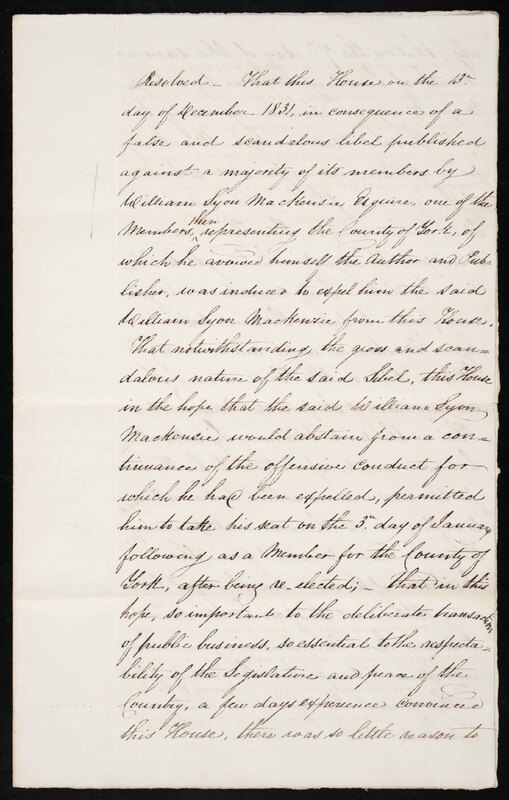 The publisher William Lyon Mackenzie sat as Member for York in the Legislative Assembly of Upper Canada. After he was expelled from the House in 1831 on charges of slander, he won a by-election in the same riding on 2 January 1832 by a vote of 119 to 1. The Tories, however, were not yet prepared to concede defeat. Less than a week later, members Henry John Boulton (1790-1870) and Allan MacNab, (1798-1862) drafted and succeeded in having the House pass this motion once again expelling Mackenzie from the Assembly on the basis of new attacks he had published in the Colonial Advocate. A second by-election was called which Mackenzie again won handily. When a third expulsion followed, Mackenzie successfully appealed to London. 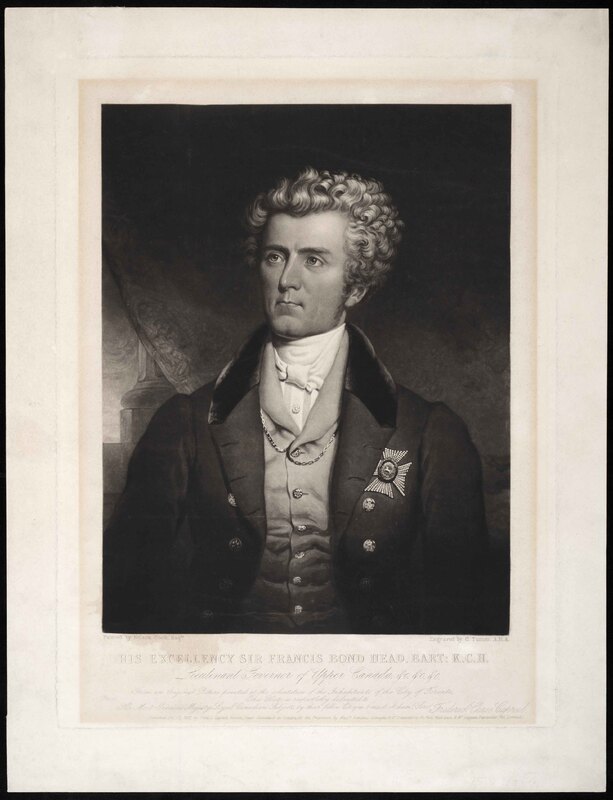 This mezzotint portrait of the Lieutenant-Governor of Upper Canada who presided over the Rebellion of 1837 was ‘painted at the solicitation of the inhabitants of the City of Toronto’ by the American artist, Nelson Cook (1808-1892). The original painting now hangs in the National Gallery of Canada. The engraver, Charles Turner, was one of the foremost mezzotint artists of the nineteenth century, with some 637 portraits to his credit. He was appointed ‘Mezzotint Engraver in Ordinary’ to King George III in 1812. As for Head, his excesses before, during, and after the Rebellion led to his recall to Britain early in 1838. Shortly after his return he was granted an audience by the Prime Minister, Lord Melbourne (1779-1848), during which Head aired all of his grievances against the colony and the government. Melbourne is reported to have replied, ‘But Head, you’re such a damned odd fellow’. He never held public office again. 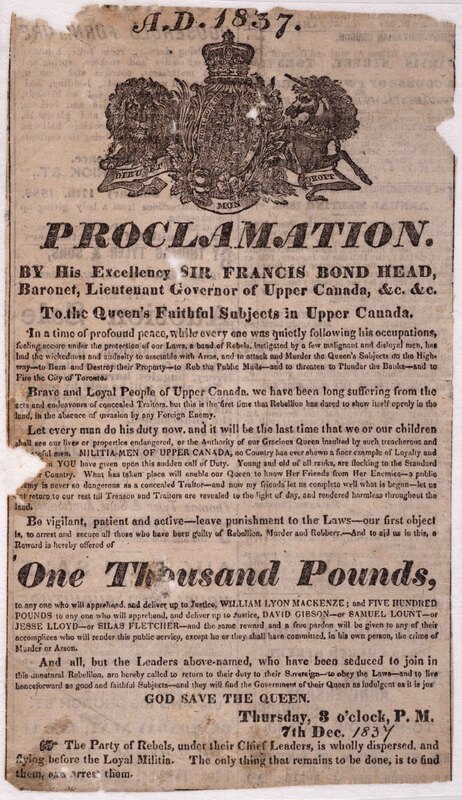 This handbill-sized proclamation dated two days after the start of the Rebellion, was issued by Sir Francis Bond Head hours before he personally led the final assault against Mackenzie and the insurgents. It offers a reward of £1000 for his arrest, and £500 for each of the other rebels, including Silas Fletcher (1780-1847). Fletcher is credited by some as the one who actually fomented the Rebellion, and not Mackenzie. The Fisher copy of the proclamation was removed from the inside cover of a copy of The New Week’s Preparation for a Worthy Receiving of the Lord’s Supper, published in London in 1809. The King’s Printer, Robert Stanton (1794-1866), had been a student of John Strachan at the turn of the nineteenth century in Cornwall, and was a veteran of the War of 1812. 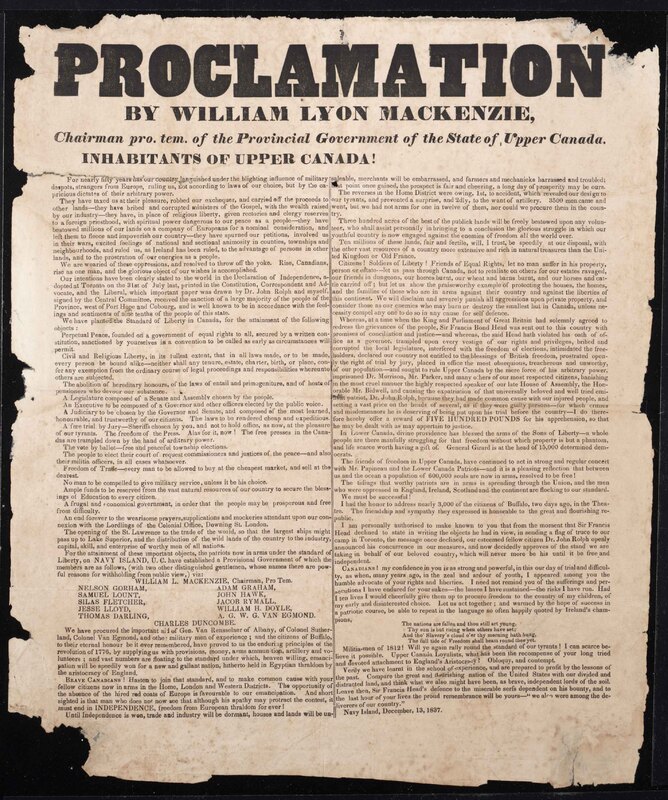 After the Rebellion failed, Mackenzie fled to Buffalo, arriving there on 11 December. Two days later he established his own provisional government on Navy Island in the Niagara River, just inside British Territory. On the same day, he had this proclamation printed, describing himself as the ‘Chairman’ of a rival government to Bond Head’s. In it he also appeals to his Canadian sympathizers to help him overthrow the colonial administration and, in a brazen move, offers £500 for the apprehension of Sir Francis Bond Head himself. A few days after the printing, Mackenzie daringly crossed onto the mainland to distribute it. Mackenzie’s anticipation of American support for his plans did not materialize in any meaningful way since the Americans were formally committed to neutrality. 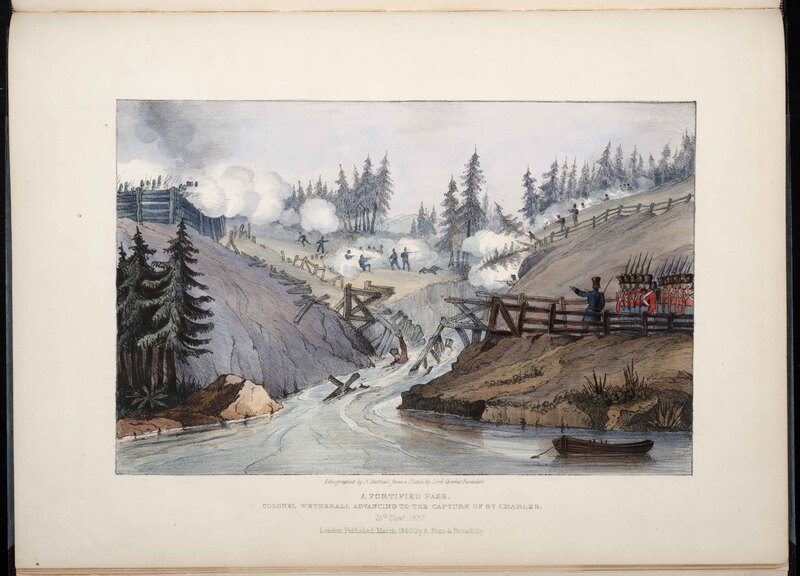 Charles Beauclerk (1813-1861). Lithographic Views of Military Operations in Canada under Sir John Colborne, during the late Insurrection. London: A. Flint, 1840.

The rebellion in Lower Canada lasted sporadically from 1837 to 1838, made more complicated by religious, linguistic, and cultural differences between the French and English populations. Both communities contributed political and social leaders to the cause. Among the most prominent was the Patriote Party leader, Louis-Joseph Papineau (1786-1871), who had sat in the colony’s Legislative Assembly since 1808. Sketches of the Battle of St-Charles (25 November 1837) and later of Saint-Eustache by the field artist Charles Beauclerk were subsequently made into lithographs by Nathaniel Hartnell in London, and then hand-coloured. They give some intimation of the carnage of the hostilities. When the dust settled at St-Charles, 150 patriotes were dead, but only seven British infantrymen. Papineau was among those who fled south in the wake of this decisive loss. 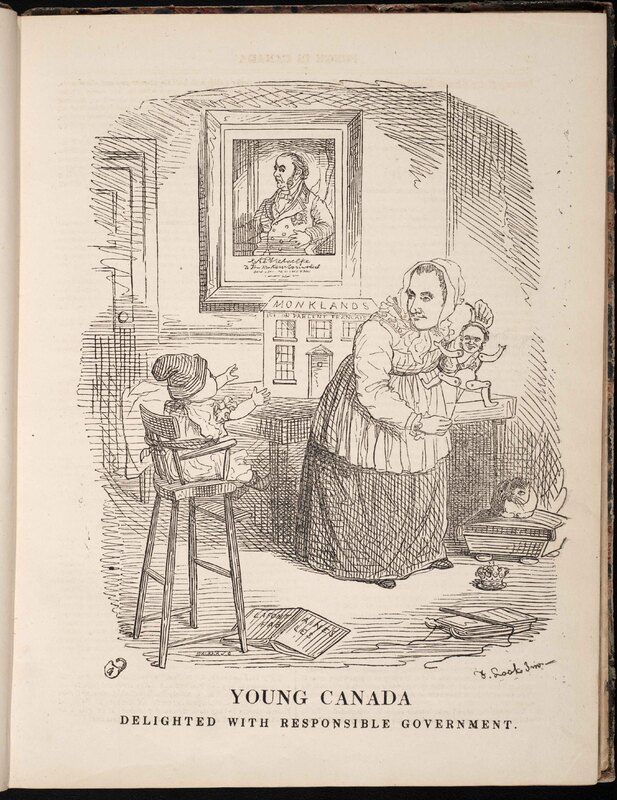 Punch in Canada. Montréal: Printed and published for the proprietor, Thomas Blades DeWalden, 1849.

Punch in Canada was the nation’s first comic journal, based on the British ‘Punch’ character created by John Leech. It appeared on New Year’s Day, 1849, just as responsible government was being achieved in the colonies, beginning with Nova Scotia in 1848. The magazine was not enthusiastic about ‘responsible government’ as a political philosophy. In his introduction to the new journal, publisher and wood engraver, John Henry Walker informed his readers that ‘the cuckoo cry of Responsible Government in a colony is Humbug … May Humbug be destroyed’. Punch’s suspicion was principally rooted in the belief that the citizenry was not mature enough to handle it, and feared that it would leave the colony at the ‘mercy of devious politicians’. The journal ceased publication on 27 April 1850.