Part VI: The Struggle for a Nation 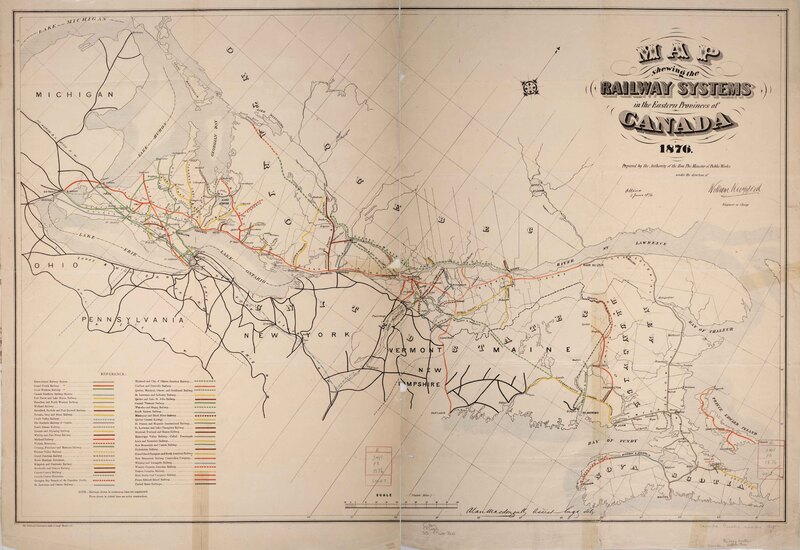 Unlike her neighbour to the south, Canada was not born in revolution. The achievement of responsible government may have provided the proper conditions for local self-rule, but it was the response by colonial politicians and populations to a series of distinct challenges and crises that ultimately paved the way to Confederation. By the middle of the nineteenth century, the Maritime Provinces of New Brunswick, Nova Scotia, and Prince Edward Island initially thought that an Atlantic union was the political way forward; meanwhile, to the west, the United Provinces of Canada East (Québec) and Canada West (Ontario) had already had such union imposed on them in 1841. But for some visionaries, like Thomas Dalton, the publisher of the 1830s era Patriot newspaper in Toronto, the future was far grander than many imagined. A single nation, covering the land mass of the northern portion of the continent, British in its institutions with firm ties to the Crown: this was the dream that some were beginning to grasp was the only option when living next to the colossus that was the United States. In the end, its realization was largely a pragmatic response to the economic and political realities of the day. To admit that reality, however, somewhat obscures the fact that the middle of the nineteenth century was an exciting time to be living in British North America. It was an era of challenge, conflict, and tension that produced its own heroes, to which the stories behind the texts in these two cases readily bear witness. 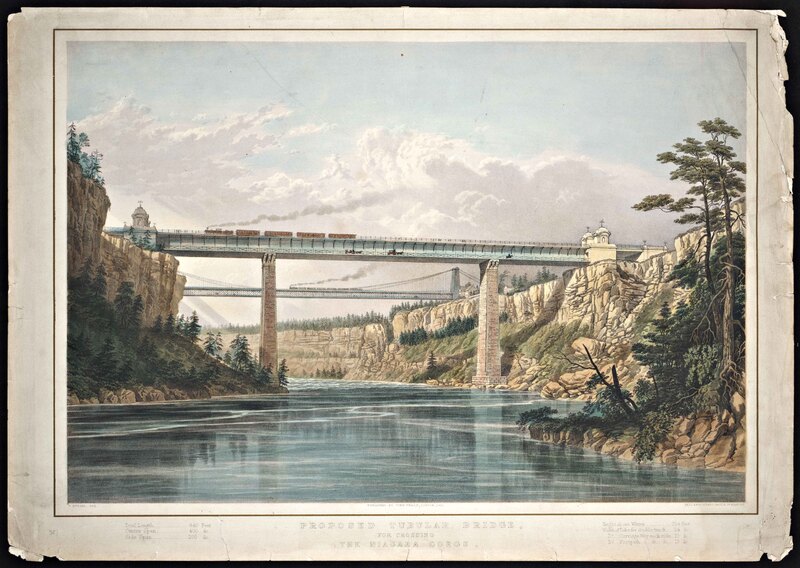 The world’s first working train suspension bridge was built over the Niagara Gorge, and operated from 1855 to 1897. Lithographs like this one, with an artist’s rendition of a proposed tubular bridge parallel to the existing Niagara Railway Suspension Bridge, confirmed what most British North American politicians knew only too well: that the main thrust of trade in the decades before Confederation was north-south rather than east-west. As long as merchants saw their natural connections along a north-south axis, as shown in this picture of trains running between Toronto and Buffalo, the union of the British colonies would remain elusive, and the threat of American annexation an irresistible possibility. 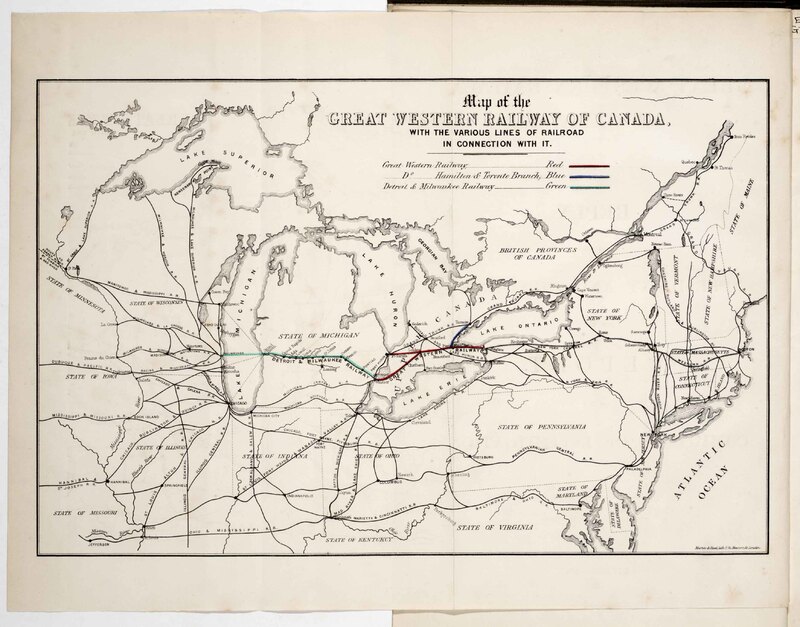 Great Western Railway of Canada. Reply of the President and Directors to the Report of the Committee of Investigation. London, 1861.

The map from the Reply of the Great Western Railway only served to reinforce the notion that, before Confederation, the natural lines of trade were in fact between Canadian and American cities, rather than within the British colonies. The principal lines operated between Toronto and Buffalo, Montréal and New York, as well as Saint John and Boston by other firms. If there were a road to Confederation, uniting the British colonies, it would be laid on ‘ribbons of steel’. In March of 1867, the British Parliament committed itself to underwriting an intercolonial railway, and also succeeded in imbedding in the Canadian constitutional mentality the idea that government-led public works were essential to nation-building. 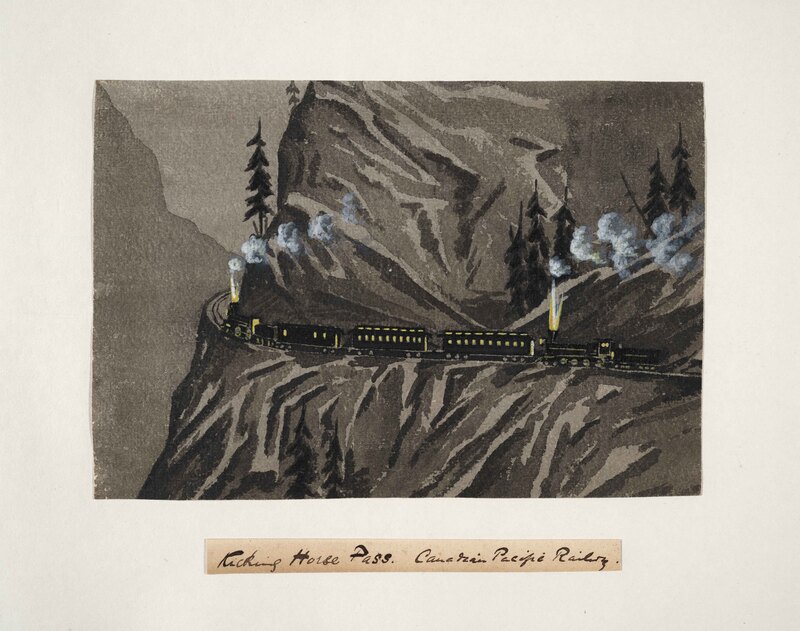 The completion of the CPR in 1885 bound the nation from Atlantic to Pacific. This album of watercolours was executed by one of the first passengers on the CPR’s transcontinental service, running from Montreal to Port Moody, which began at the end of June 1886. It contains fourteen individual works of art, possibly executed by one Mr Alfred Peacock, depicting the scenery of British Columbia as well as details of life along the rail lines, including snow sheds and hotels. Displayed are scenes from Kicking Horse Pass in the Canadian Rocky Mountains. With a ruling gradient of 4.5 percent, the original railway line descending from the Alberta summit to the town of Field, British Columbia was known as ‘The Big Hill’, the steepest stretch of any mainline railroad in all of North America. 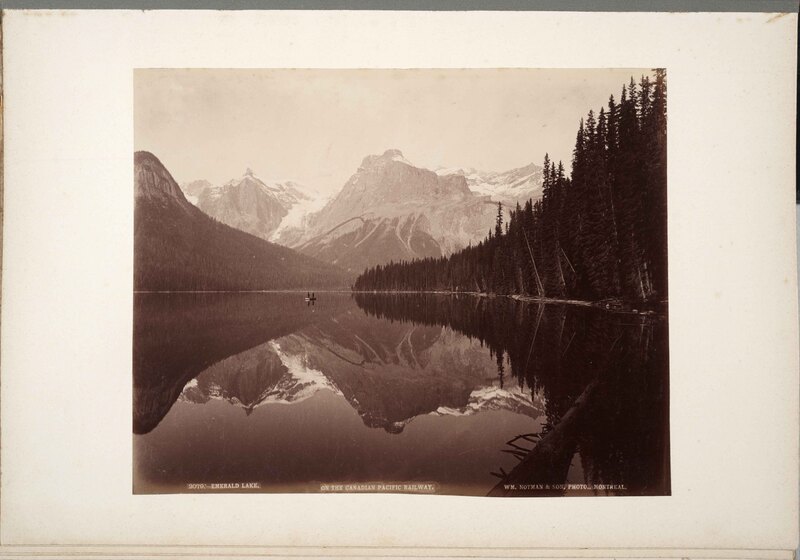 William Notman & Son. Album of Photographs of the Canadian Pacific Railway. Vancouver, circa 1890.

William Van Horne (1843-1915), who became President of the CPR in 1888, recognized the advertising potential of photography, and engaged the firm of Notman and Son to document the western territories through which the new railway ran. William McFarlane Notman (1857-1913), son of the company’s founder, first took these iconic images in 1884, from the CPR cars. He returned to the West seven times between 1887 and 1909, and his albumen prints of the scenery of Newfoundland, Québec, the Prairies, and British Columbia reveal a nation eagerly reaching from sea to sea. These remarkable photographs are but one part of a body of work that, as one scholar has noted, reflect ‘the optimistic spirit of the early years of Confederation. This was an age of vitality, when opportunity was seized on every hand. Men with [Notman’s] outlook, individuals with unbounded faith in the future, brought about a union of the provinces as a prelude to greater things’. 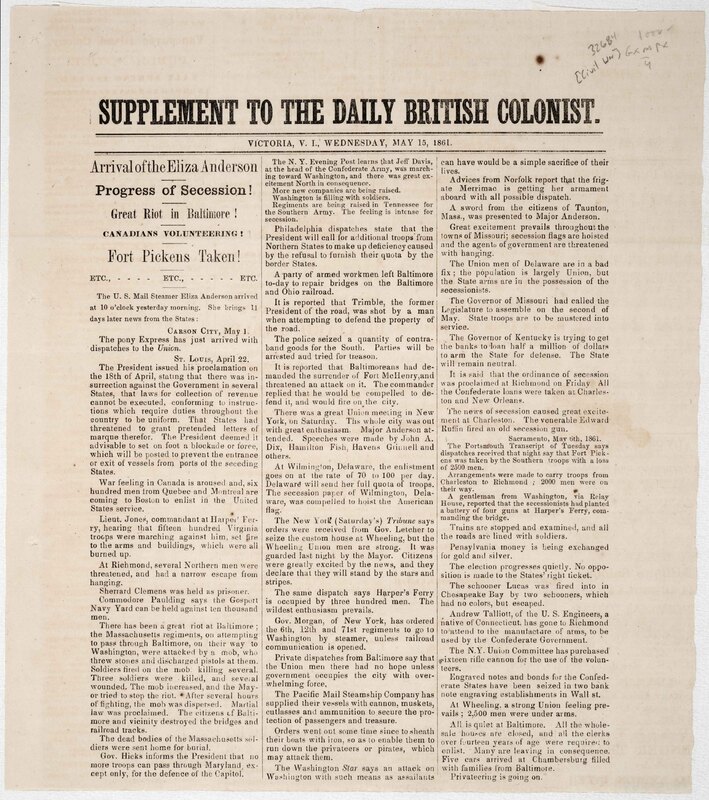 This supplement to the Daily British Colonist was issued on 15 May 1861, less than a month after the American Civil War began, and provides a brief overview of the hostilities to that moment. There was immediate interest in the War among the youth of Canada, and by the time this supplement was published, some six hundred men from Québec had volunteered with the Union Army. The Civil War proved to be one of the greatest challenges the independent British provinces would face because there was strong feeling in the Republic that Britain and her colonies were sympathetic to the Confederate cause. Even Queen Victoria was apprehensive, admitting ‘the impossibility of our being able to hold Canada, but, we must struggle for it.’ Given Britain’s reluctance to defend her colonies against a potentially vengeful United States, it became even more incumbent upon British North American politicians to find a local solution to their own security. 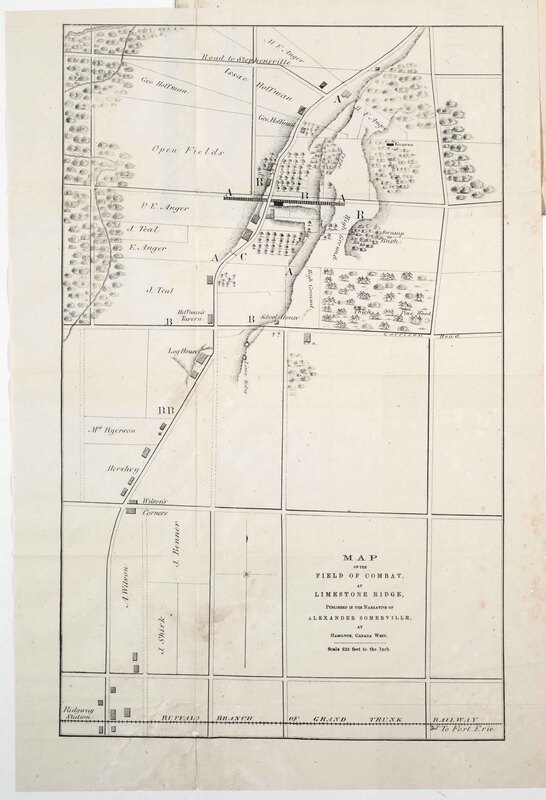 The final push towards Confederation came in the unexpected form of Irish Republicanism, specifically the Fenian Invasions of 1866. The Fenians first organized in New York City 1858, hoping to force the liberation of Ireland by taking the British colonies in North America hostage. Their first attack on Campobello Island in April of 1866 failed. The map on display documents the more successful raids that followed in the Niagara Peninsula, where reservists from Trinity College, Toronto, died in battle. Many post-Civil War Americans were sympathetic to the Fenian cause prompting the new British Colonial Secretary, Lord Carnarvon to write in October 1866 to the British Prime Minister explaining that Confederation had ‘become a necessity to us and it was a question of confederation amongst themselves, or of absorption by the U.S.’ 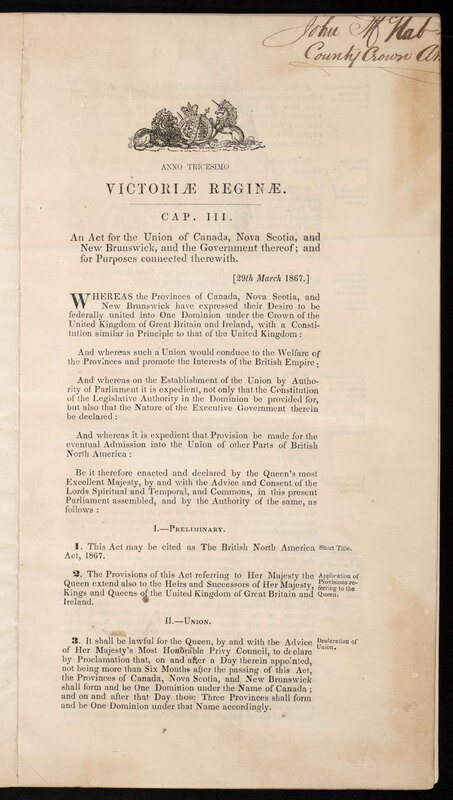 Delegates from Nova Scotia, New Brunswick, and the Canadas met in London on 4 December, and the Québec resolutions were affirmed with little fanfare; they would become the foundation for the British North America Act. Among the remaining contentious issues were the final division of certain powers between the federal and provincial jurisdictions; the composition of the proposed Upper House, or Senate; and whether its members should be elected or appointed for life or for a term. The British North America Bill was submitted to the Parliament of Westminster, passed on 8 March, and received royal assent on 22 March. Canada, a self-governing country within the British Empire, would come into existence by royal proclamation the following 1 July. 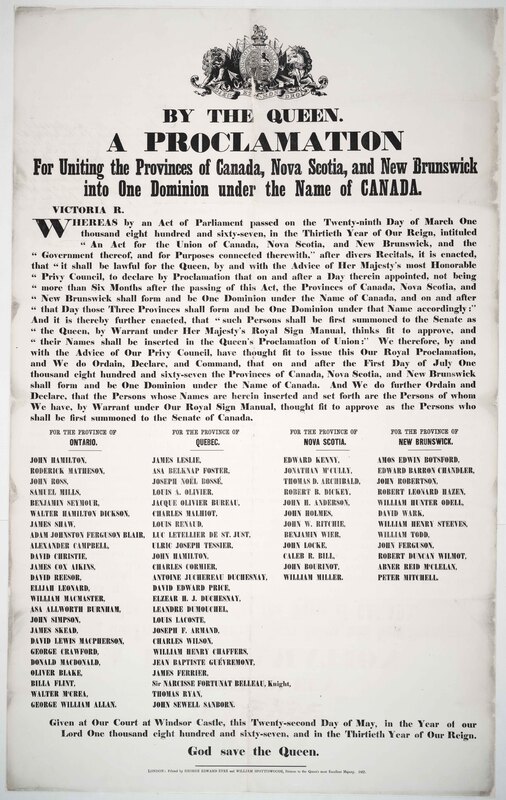 A Proclamation for the Uniting the Provinces of Canada, Nova Scotia, and New Brunswick into one Dominion under the Name of Canada. London: Eyre & Spottiswoode, 1867.

This massive broadside recording the proclamation of Confederation is noteworthy for being the only known copy of the royal proclamation to have survived from outside of Canada. It was posted at the Market Cross of Lanark, Scotland by William Bryan Allan, Deputy Clerk of the Shire, on 29 May 1867. Copies were distributed throughout British North America in the months leading up to 1 July, but the Fisher broadside, with detailed manuscript notes on the verso in the hand of Mr Bryan himself, is the clearest evidence that the proclamation had been widely and publicly disseminated throughout Great Britain. Bryan’s inscription reads:

I, William Bryan Allan, Sheriff Clerk Depute of Lanarkshire at Lanark do hereby testify that the written Royal Proclamation was duly published to the Lieges by posting a like just and full copy thereof at the Market Cross of the Royal Burgh of said Shire this twenty ninth of May in the year one thousand eight hundred and sixty seven under my personal superintendence. 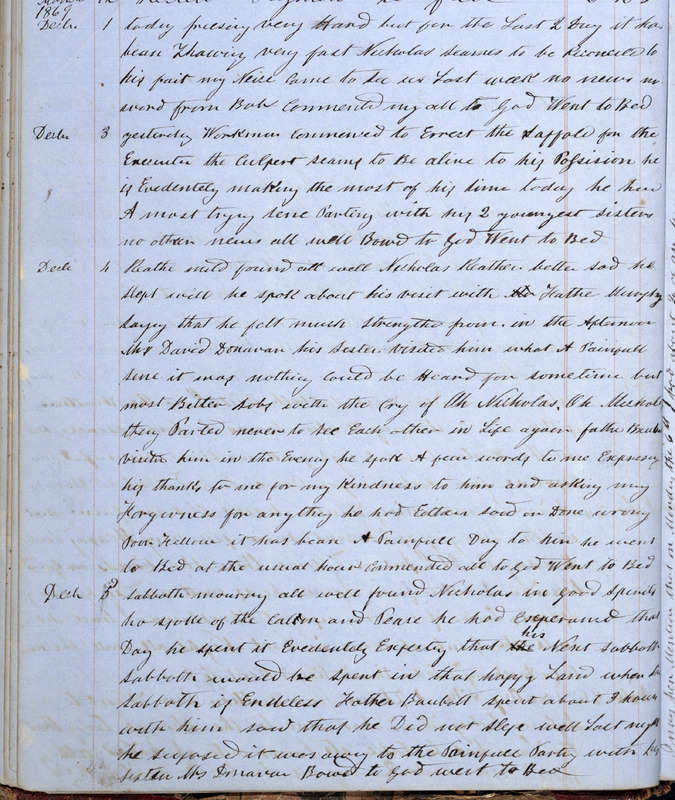 William Dickson immigrated to Upper Canada from Scotland in 1834. In 1864 he moved from Renfrew to Goderich where he had accepted the position of turnkey in the county jail. His journal describes life in and around Huron County on the eve of Confederation. One of his longest entries is for 1 July 1867 which begins, ‘Confederation morning, the Kingdom of Canada is now in existence. May it prove a blessing to the people’. He goes on to describe the launching of a new vessel that day on Lake Huron which bears the name of the new Province of Ontario, ‘the proudest name in the confederate Kingdom of Canada’. He saves his highest praise for the end of the entry, however, when he observes that ‘best of all, not a single committal to the gaol took place, through the amusements of the day’. 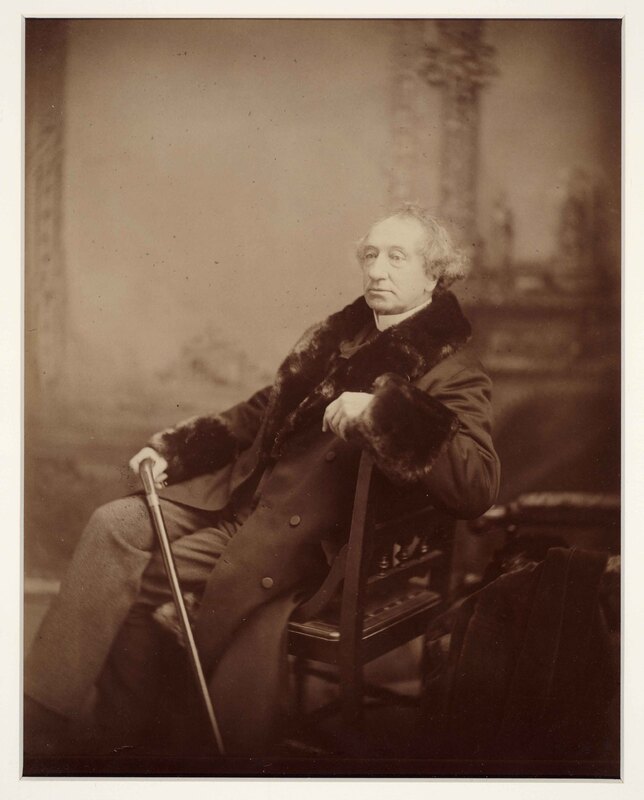 William James Topley was Ottawa’s pre-eminent studio photographer in the latter part of the nineteenth century. His photographs of immigrants arriving at the port of Québec are still considered iconic, and he has the distinction of having photographed every politician who became Canadian Prime Minister from Macdonald to William Lyon Mackenzie King. Topley’s more famous portrait of Macdonald appears on the Canadian $10 bill, but this particular image of Canada’s first Prime Minister is not without its admirers. In 1883, while visiting Québec City, Macdonald was seen wearing a coat that his supporters felt was unworthy of someone of his dignity. A new fur coat was purchased for him from G.R. Renfrew & Co. (the antecedent to Holt-Renfrew), which Macdonald is seen wearing in this evocative portrait. 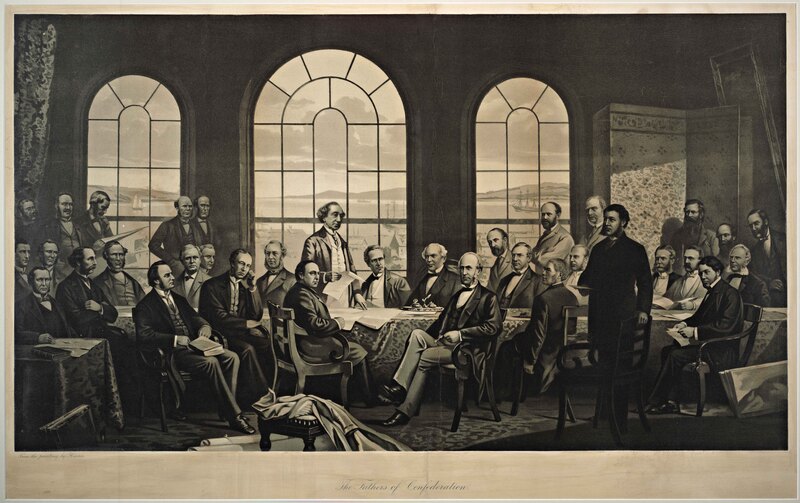 The Fathers of Confederation. Circa 1890.

This massive lithograph was likely done from a photograph taken of the painting commissioned by the government from Robert Harris in 1883. It depicts the Fathers at the Québec Conference held in October 1864. Harris was mistaken in his belief that he held the copyright to the image, which was actually vested in the Canadian government. Nevertheless, the original painting established Harris’s reputation as one of the foremost portrait artists of his age. The painting was destroyed by the fire that consumed the Parliament in 1916. As a result, these early rare lithographs are of particular importance in preserving the archival record of an original image that no longer exists.