Part II: The Struggle to Engage 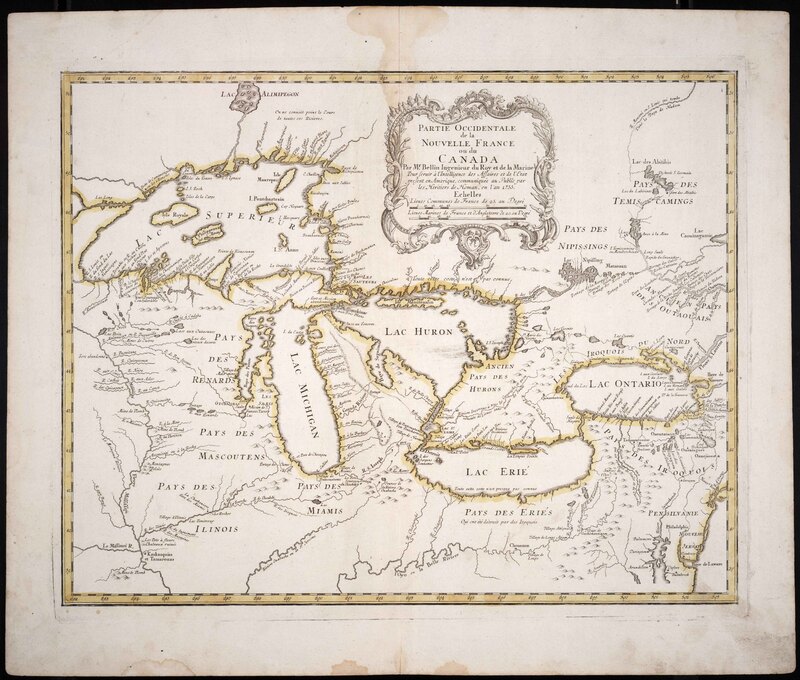 To say that the relationship between the First Nations Peoples, Métis, Inuit, and Europeans has been fraught over the past five hundred years of the nation’s history would be an understatement. As the publications in this section demonstrate, many of the problems that Canada’s Indigenous citizens still encounter today have their roots firmly planted in the attitudes and sentiments expressed and codified herein. The books and images may record the efforts of explorers and settlers to engage as far as they believed they were able with the original inhabitants of this country; but it would promote an unhistorical idealism to pretend that such engagement progressed either honestly or smoothly. The myth of the ‘noble savage’ was advanced fairly early on by the missionaries who laboured throughout the New World, beginning with Columbus.
As many of the following authors demonstrate, they believed it incumbent upon themselves to ‘civilize’ the native population first in order to bring them to salvation by means of the Christian Scriptures. It was the rare cleric who came to realize that conversion to the new faith did not require the wholesale abandonment of their native culture. That being said, it must be admitted that it was also through these same missionaries that the introduction of a written form of the native languages was finally achieved in the nineteenth century. Nevertheless, the more common narrative behind the history of Canada’s Natives is one of betrayal, reaching its culmination in the pre-Confederation era with the War of 1812, when it was deemed expedient to abandon the promises made to those loyal First Nations People who had fought for the Crown in order to preserve some part of the continent that they could call their own. Sadly, the struggle to engage was too often a struggle to control and eradicate. 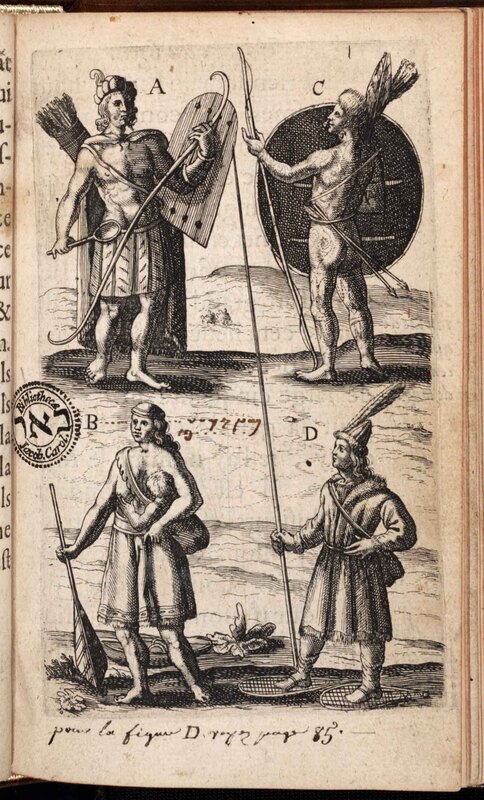 Champlain is a polarizing figure in Canadian history. On the one hand he is credited with pursuing the dream of a French colony in which Europeans and Natives lived together, learning from each other, while on the other, he is regarded as an ethnocentric, willful exploiter of Native culture. It has been argued, however, that for a seventeenth-century European explorer, his view of the Indigenous People was more progressive than many others, largely owing to the fact that his interactions with them were personal and immediate. In this book, first published in 1619, Champlain reports on his life among the Native peoples in Huronia during the winter of 1618. It first circulated about the French Court in manuscript form, urging that settlers and missionaries be sent to the colony as soon as possible to help the Natives more quickly know God, the King and French culture, ‘so that with French speech they may also acquire a French heart and spirit’. 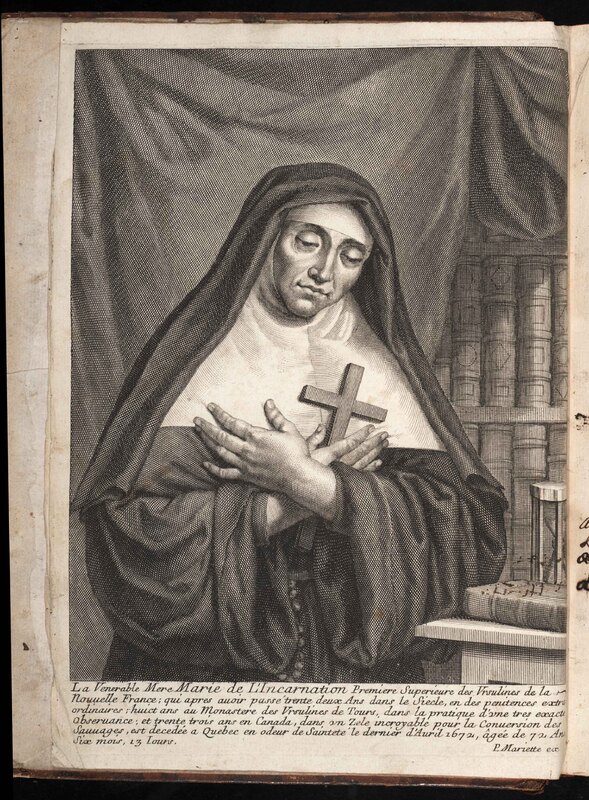 Marie Guyart, known in religion as Mother Marie de l’Incarnation, was Canada’s first teacher, charged with the responsibility of educating both French and Native girls. With the passage of time, her letters and autobiography reveal ambivalence about her personal experiences in New France. Sometimes she perceives the Indigenous peoples as noble in character, while at others they still seem ‘savage’. In the end, however, she came to believe that Christian identity need not be associated with French culture, and eventually doubted the legitimacy of ‘civilizing’ as part of the missionary enterprise. For her own part, Marie mastered several of the local languages and composed a catechism in Huron, three in Algonquin, as well French-Algonquin, Algonquin-French, and Iroquois dictionaries. 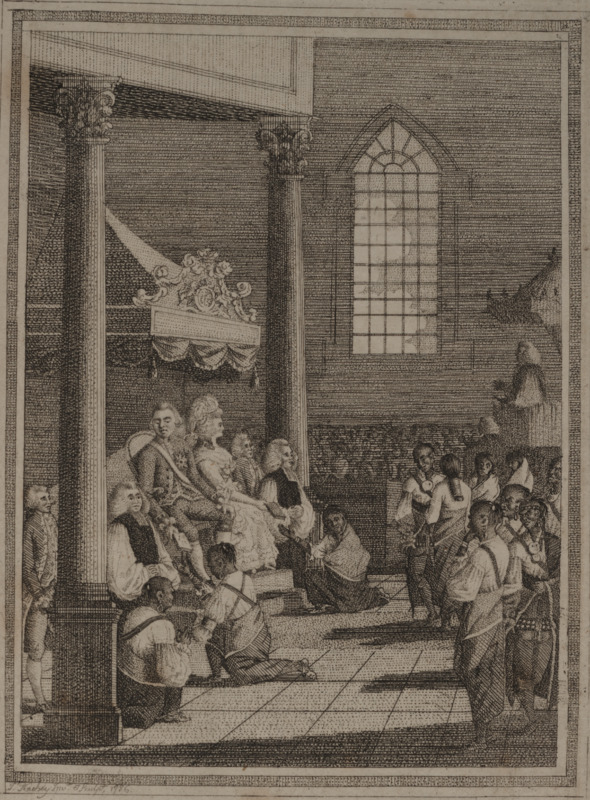 The basic position of the Protestant colonial powers concerning the evangelization of the Natives of North America was that the truth of Christianity would be self-evident to those who could read the Bible in their own language. To that end, Bible Societies were established in the seventeenth century. After the American Revolution, efforts to proselytize the King’s loyal Native subjects in British North America did not wane, as this 1787 edition of the Book of Common Prayer bears witness. Besides the formal Liturgy of the Church of England it also included the first rendering of any complete Biblical text into the Mohawk language. The Gospel of St Mark herein was translated by Thayendanegea, better known as Joseph Brant (1742-1807). 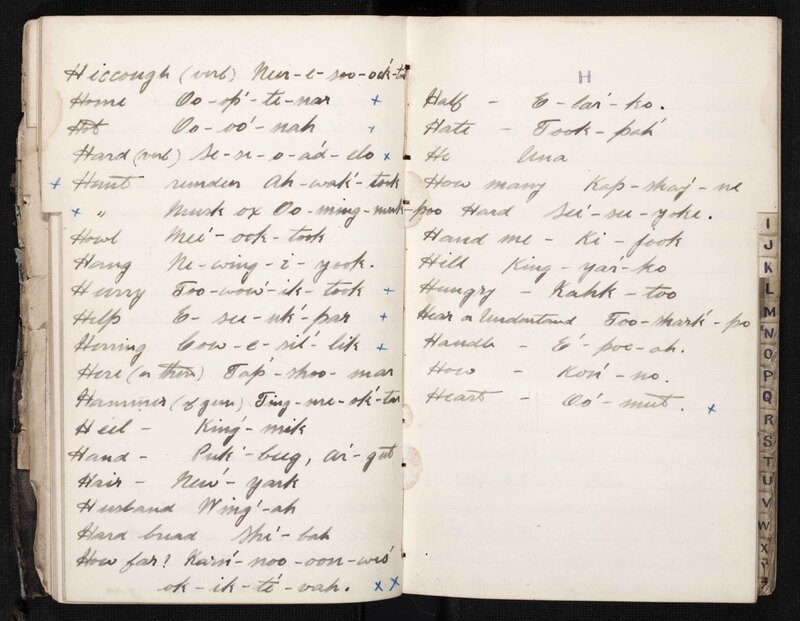 James Williams Tyrrell, brother of Joseph, was a civil engineer who was also trained as a hydrographer and meteorological observer. In the summer of 1885 he undertook an official expedition to the Hudson’s Bay territory on behalf of the Federal Government, spending the winter at Ashe Inlet on Big Island, located on the north side of the Hudson Strait. It was there that he had many interesting encounters with the local Inuit population, recorded in this journal and his photographs. His diary not only provides fascinating vignettes of life in the far north at the end of the nineteenth century, but also a glossary of commonly used Inuit words and phrases. The glossary that Tyrrell composed remains an invaluable resource for a written language that was still in its infancy. 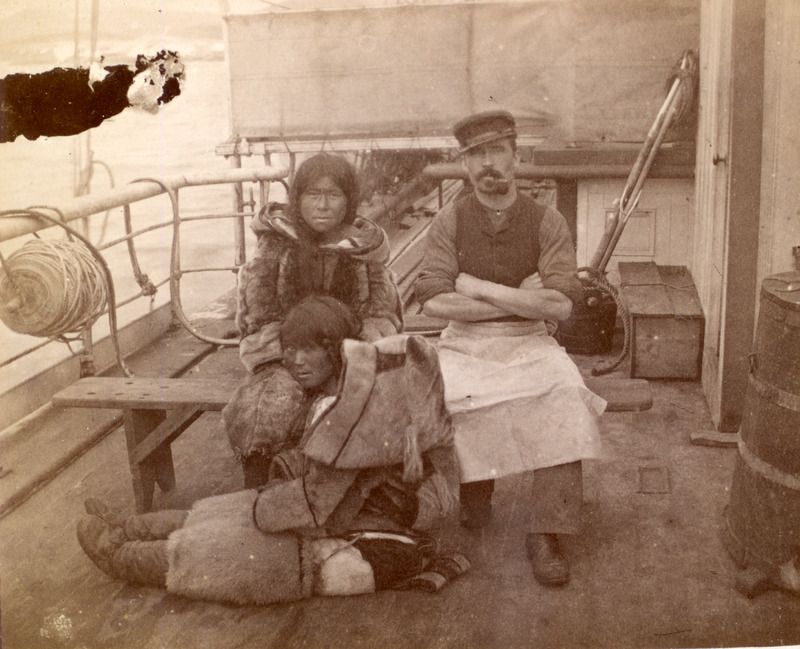 In the summer of 1885, Tyrrell undertook an official expedition to the Hudson’s Bay territory on behalf of the Federal Government, spending the winter at Ashe Inlet on Big Island, located on the north side of the Hudson Strait. Besides maintaining a journal, he also took these remarkable photographs documenting Inuit life in the far north.