Part I: The Struggle to Understand 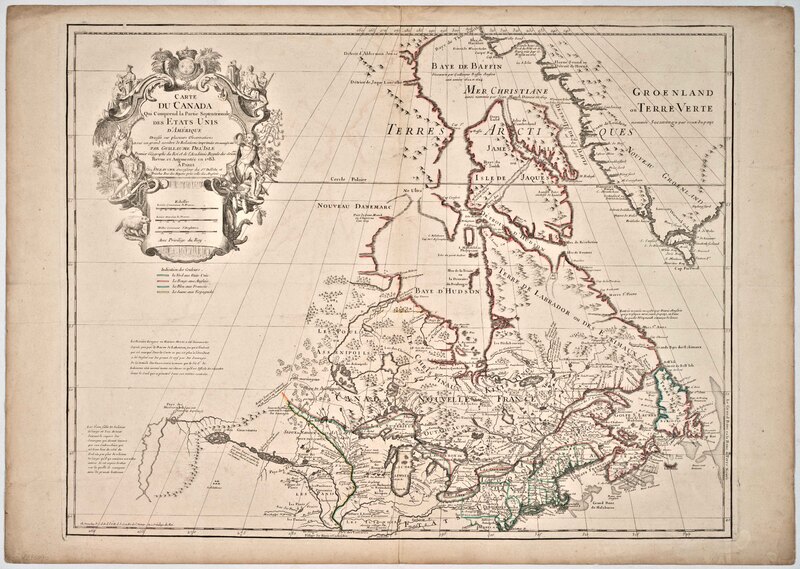 ‘I am rather inclined to believe that this is the land God gave to Cain.’ Such was the initial impression of Canada recorded by Jacques Cartier (1491–1557) as he made his way through the Straits of Belle Isle in May of 1534. He was not alone in this opinion. For many of his fellow Europeans this massive territory to their west seemed little more than a huge rocky outcrop, an obstacle en route to the Orient, dismissed by Voltaire in 1759 as ‘a few acres of snow’. The contours of its apparently boundless space were already well known to the Native Peoples who had inhabited it for thousands of years, but it was a place that would not yield its secrets easily. Nevertheless, explorer after explorer continued to try, originally searching for ﬁsh and furs and natural resources.

In the process they discovered what the Native Peoples already knew: the terrible beauty of a vast land surrounded by three great oceans. When they ﬁrst arrived, the Europeans viewed this northern part of the ‘New World’ as something merely to be exploited, but the books and reports that they left behind reveal their awe in the face of a country that resisted their efforts to understand it. Rivers that were impassable, dark and dense forests inhabited by mosquitoes and blackflies, cataracts that were as deadly as they were beautiful; a great northern sea that could become a frozen graveyard within days; a granite shield and seemingly unending prairie; mountains that beckoned and forbade at the same time. This was the great land that it took more than four centuries to investigate, navigate, chart, and analyze… and the work still goes on. 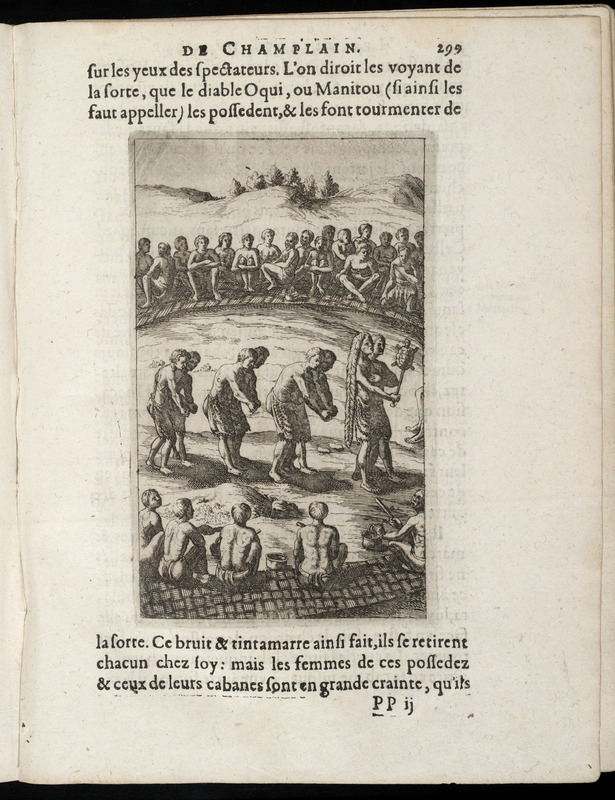 In 1603, Samuel de Champlain made his first voyage to what would become Canada. From the beginning of his adventures he made a point of publishing the details of his travels in order to stimulate interest in New France, as well as to encourage investment. One of his greatest challenges was to convince the French government and investors that the newly-explored territories would thrive only if permanent settlements were established. The general tendency, however, was to view New France as merely a seasonal centre for the fur trade and its associated activities, rather than as a stable colonial home. In this book, Champlain provides the first detailed description of Canada’s eastern coast, as well as the customs of some of its native peoples. The village depicted in the engraving, while judged to be somewhat idealized, is still considered substantially accurate 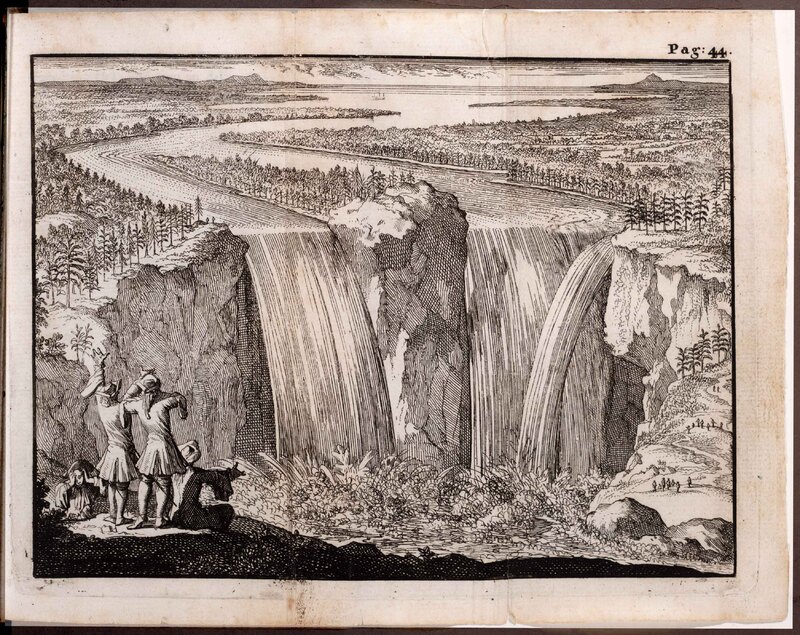 Louis Hennepin was a Recollet priest who, at the request of Louis XIV, left the Low Countries to serve in the missions of New France at the end of May 1675. His travels took him around much of the colony, from Cap-Tourmente to present day Kingston. On 8 December 1678, he was among the earliest Europeans to witness the might and majesty of Niagara Falls, and is credited as the first to provide an eye-witness account of them in this important book. In subsequent years his explorations would take him around the Great Lakes and the Mississippi River Valley regions before he returned to Québec in 1681. His vivid descriptions made this book instantly popular, and whatever faults it may otherwise contain, it succeeded in capturing the popular imagination about the exotic French colony. 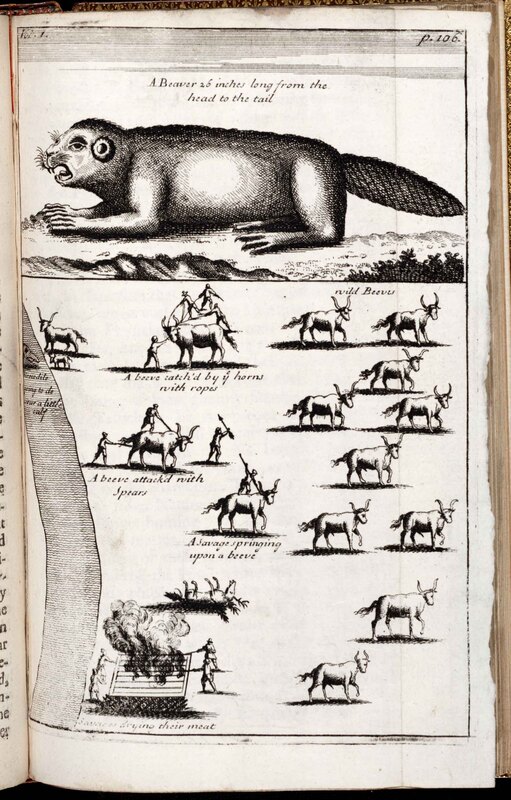 The baron de Lahontan’s report of his explorations in the western regions of New France must be read with a somewhat critical eye, since it is unlikely that he ever set foot in the western portion of the continent. Lahontan arrived in the colony in 1683 as a military officer at the remarkable age of sixteen years, and his vivid accounts in this book of what would become Ontario and the American Midwest proved so popular that the publication saw some twenty-five editions appear within the first sixty years after publication. Lahontan personally supervised the publication of this English edition and corrected the engravings from the original French edition. This English edition also includes a previously unpublished map of Newfoundland. It was the second most popular eighteenth-century travel narrative of North America after Hennepin’s. 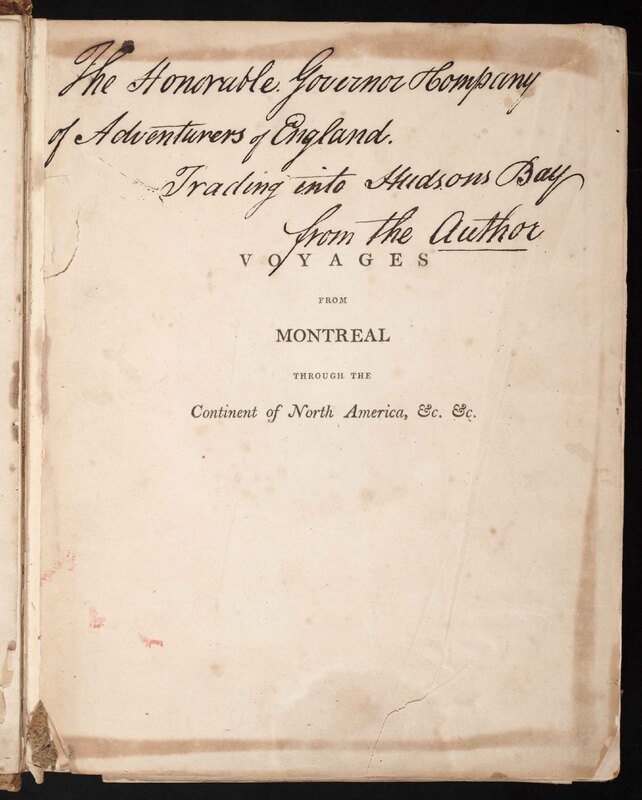 Mackenzie was one of the North West Company’s principal explorers and his expeditions into northern and westernmost reaches of the continent are the subject of this book. In 1789 he negotiated the river that would eventually bear his name, sailing from Great Slave Lake to the Arctic Ocean. In 1793, he undertook a second voyage, this time by river and land portages, from what is now Peace River, Alberta to the Pacific. In 1799 he moved to England he published this immensely popular journal. The Fisher copy bears an inscription in Mackenzie’s own hand, and was a presentation gift from the author to ‘the Honorable Governor & Company of Adventurers of England, trading into Hudsons Bay’. The ghostly image on the title page is offset from Mackenzie’s portrait, an unintentional transfer of the inks from one page to the other. 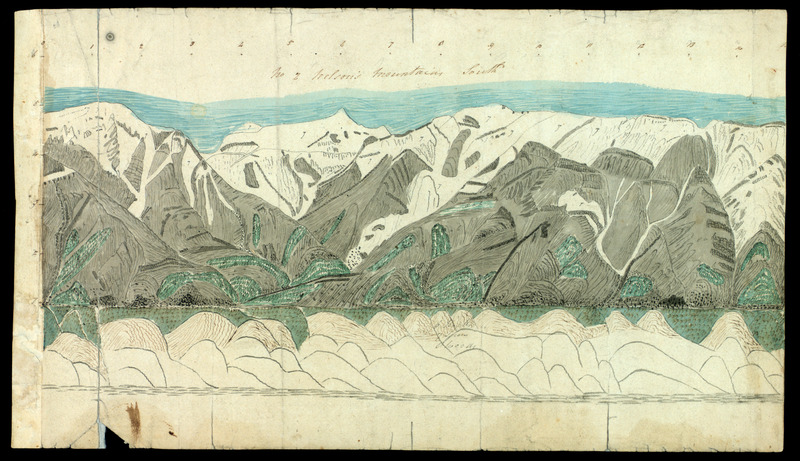 At the age of fourteen, David Thompson was apprenticed to the Hudson’s Bay Company, and left London for Fort Churchill in what is now Manitoba, never to see England again. In less than thirty years, he explored and charted over three million square miles of what would become Canada, from Montréal to the Pacific and the North. After his retirement in Terrebonne, Québec, he wrote the story of his adventures. Two copies of his unfinished holograph manuscript are held by the Fisher Library. The resulting book, David Thompson’s Narrative of his Explorations in Western America, 1784-1812, which includes this account of his exploration and mapping of the Rocky Mountains in 1801 and 1802, was edited by another preeminent Canadian explorer, J.B. Tyrrell (1858-1957) and was published by the Champlain Society in 1916.

While recuperating from a fractured leg as a young man, Thompson studied surveying under the Hudson’s Bay Company inland surveyor, Philip Turnor (ca. 1751-ca. 1799), a circumstance that changed the course of his entire career. He was subsequently hired by the North West Company and worked as one of their surveyors until his retirement in 1812. The following year he completed a large map of western British North America for the Company that was hung in their headquarters at Fort William. It was subsequently published without credit in 1816. These sketches of the western mountains were done in situ. 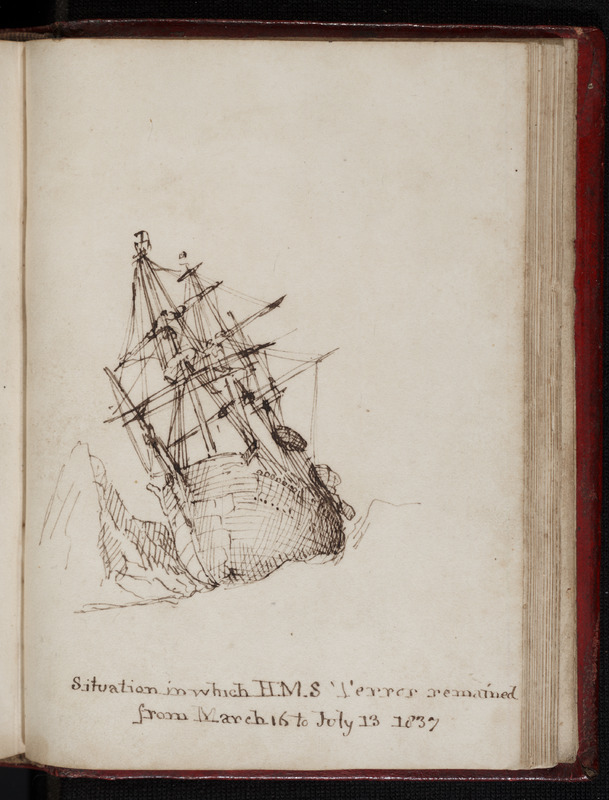 No part of Canada has proven more elusive to comprehend than the vast, uninhabited sections of its far north. As early as the Vikings, understanding the mystery of the northern sea spanning the continent from the Atlantic to the Pacific was long a goal of the European explorers. In June of 1836, Owen Stanley left the Orkney Islands, under the command of Captain George Back, on board the Terror bound for the Arctic. His principal responsibility was to record astronomical and magnetic observations made on the voyage, as he explains in this diary. His descriptions of the mission are vivid with lively reports of polar bear encounters, the hazards of anchoring one’s ship to rolling icebergs, and how to while away the hours after your ship becomes frozen in sea ice. The Terror and Erebus are most famous, however, for being the ships commanded by Sir John Franklin (1786-1847), lost during the Arctic expedition of 1845-1848. 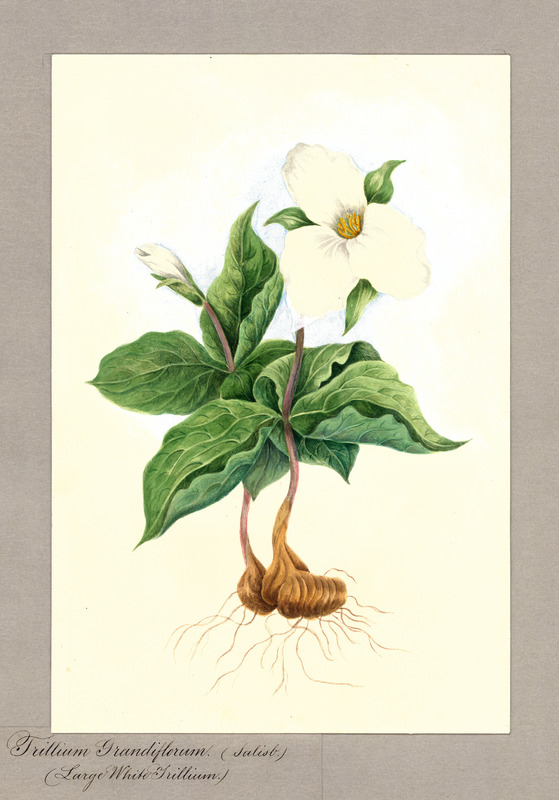 In 1863, Chamberlin began sketching and painting illustrations for a book about Canadian wild flowers that had been proposed by her aunt, Catharine Parr Traill. Two years later, she transferred the images to lithographic stones, which were then processed by Charles Fuller, the managing director of Chewett & Company of Toronto. In 1867, Chamberlin paid her aunt fifty dollars for her text, and Canadian Wild Flowers was published by John Lovell of Montreal the following year. In addition to its botanical importance, the book is considered the first Canadian ‘coffee table book’. Besides documenting wild flowers, Chamberlin also produced seventy-three studies of fungi, several of which were published by the Geological Survey of Canada. Her books and water colours are a typical expression of the Victorian fascination with natural history, but also prefigure the conservationist concerns that would emerge by the middle of the following century. The Fisher Library is home to over three hundred of Chamberlin’s original artworks. 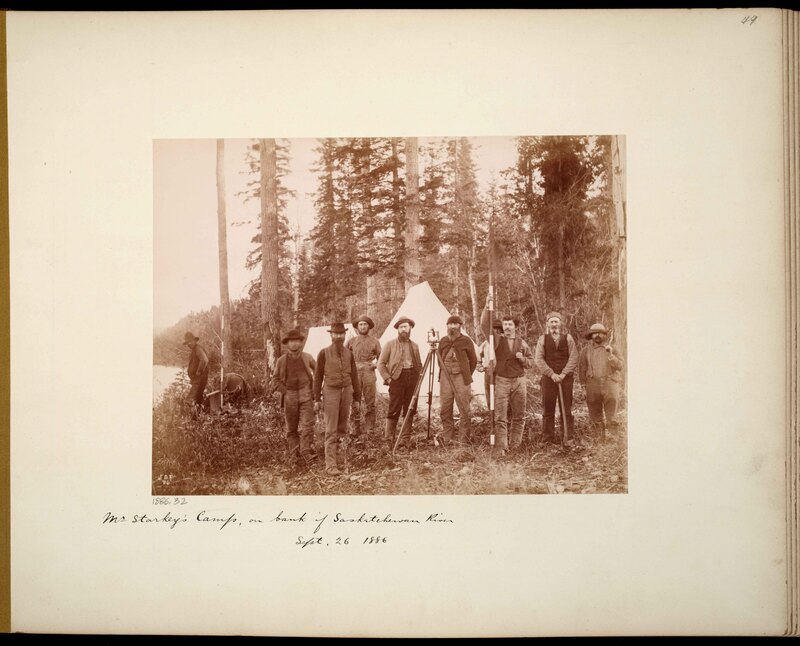 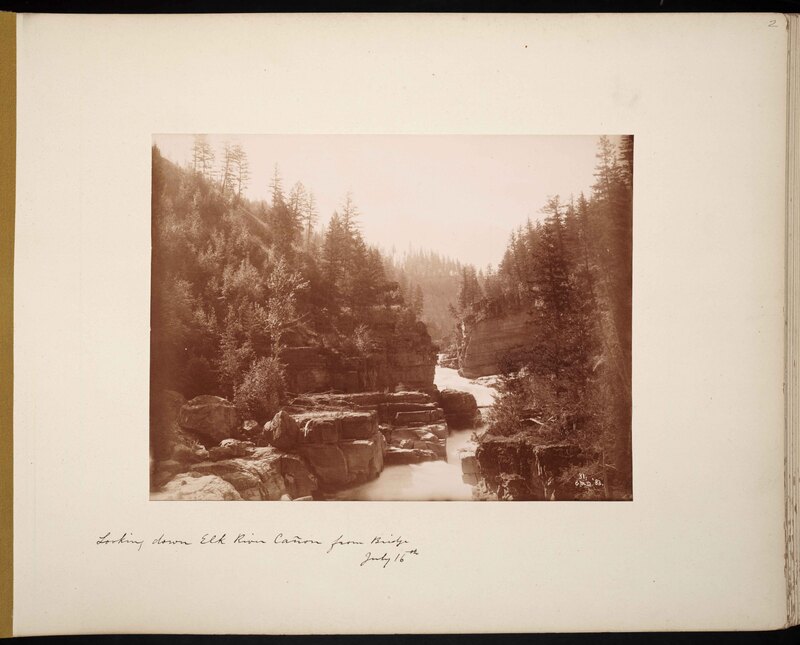 These photographs, taken by the surveyor George Dawson during an expedition to the Prairies and Rocky Mountains in the mid-1880s. New photographic technologies were a key part of Dawson’s data collection, and in spite of their beauty they are not without their critics. Some have argued that, as tools of an effectively colonial government, they must be judged not only for what information they include, but also for what may have been purposely excluded from the frame with some modern scholars suggesting that early photographs of Canada’s western frontier were part and parcel of an effort to categorize and exert control over both people and places consistent with systematic plans devised by the British War Department. Be that as it may, Dawson’s photographs are a last invaluable record of Canada’s West before the major influx of European settlers. 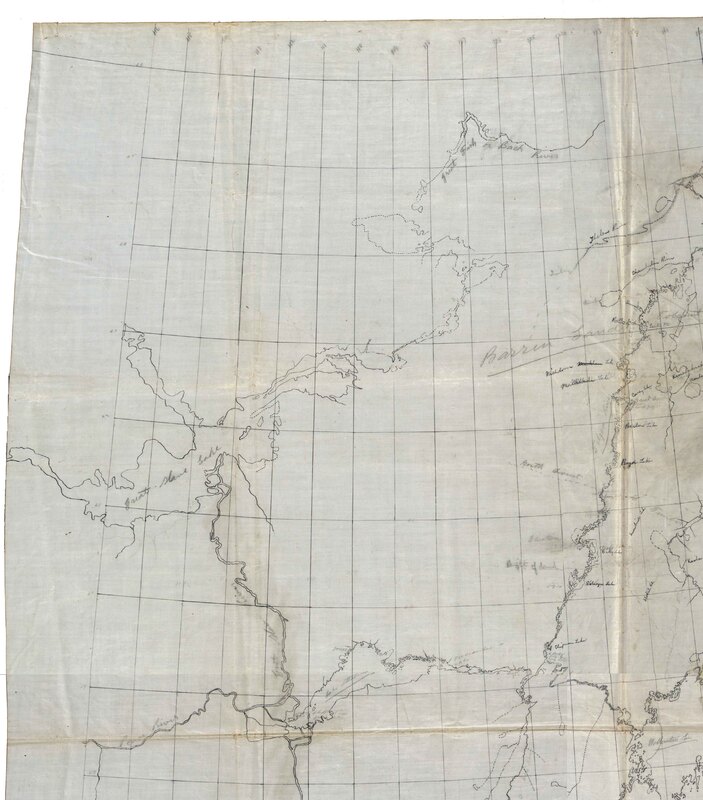 This manuscript map was prepared by James Tyrrell based on data that had been supplied by his brother, Joseph. It depicts the vast, rugged territory that lies north of 50°, from Great Slave Lake to Hudson’s Bay. The date of composition is inferred from the fact that it records the route of the Geological Survey expedition that had been undertaken in 1893. The map was originally outlined in pen and ink by J.B. Tyrrell with notes in both his own and his brother’s hands. The route of the Canadian Pacific Railway is depicted in red, with the overland route taken by the expedition from Churchill to Norway House sketched in. There is evidence of corrections made to the manuscript, particularly in the area around Marble Island, as well as the coastline of the Hudson’s Bay between Chesterfield Inlet and Fort Churchill.