Part III: The Struggle for the Continent 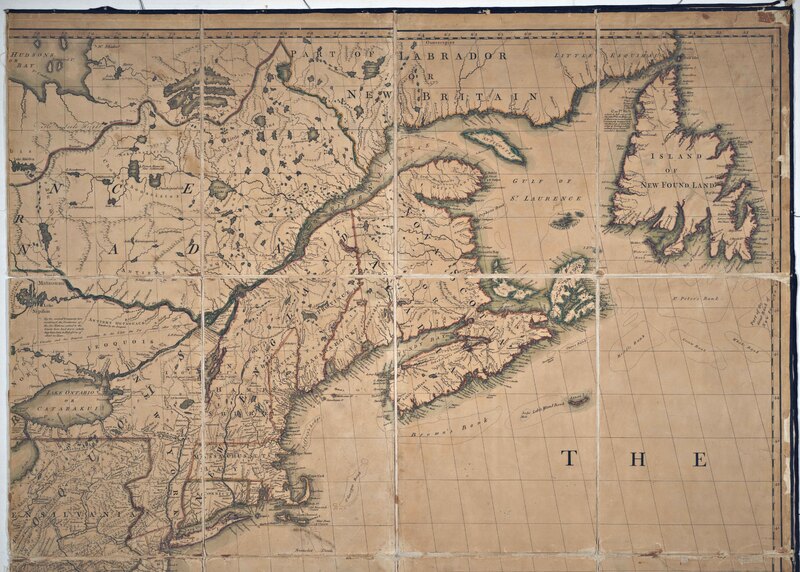 A map of the British and French dominions in North America, 1755

According to the Treaty of Tordesillas of 1494, Pope Alexander VI (1431–1503) neatly divided the New World along an east-west axis between Spain and Portugal with the Spanish theoretically taking control of the majority of North and South America, excluding what would become Brazil. In reality, however, the other colonial powers largely ignored the treaty’s articles with regards to North America and ‘New Spain’ found itself conﬁned to Mexico and the southernmost portions of what now constitutes the United States. The northern part of North America was left to the French, English, and Dutch to ﬁght over for several centuries, with the majority of the continent ﬁnally ceded to the British according to the terms of the Treaty of Paris in 1763. This settlement, however, would not bring lasting peace. Enduring tensions between French and English in the future Canada have their roots in this historic jousting, and the efforts to accommodate the French culture within the new English reality would be one of the contributing factors to the American Revolutionary War. That particular conflict would, in turn begin a new phase in the struggle to control the continent, one that would not truly subside until the achievement of Canadian Confederation in 1867. The accompanying documents trace the outline of those near-constant contests. 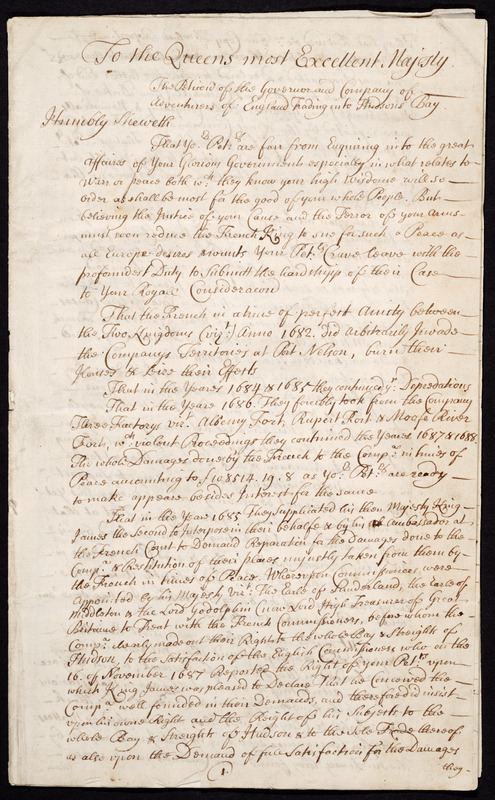 The struggle for control of North America was not only fought between the armies of France and England; it was also played out in the boardrooms and outposts of their principal trading companies. A royal charter dated 2 May 1670 originally granted control of 1.5 million square miles of territory west of Hudson’s Bay to the ‘Company of Adventurers’. Forts belonging to the Hudson’s Bay Company quickly became pawns in the imperial struggle, most notably during King William’s War (1688-1697) and Queen Anne’s War (1702-1713), but also during times of relative peace, during which the outposts changed hands numerous times. About 1710 the Commissioners drafted this strongly-worded petition to Queen Anne, reviewing the Company’s previous grievances over the last quarter century, and suggesting that any proposed treaty of peace with France to end the hostilities should reinforce the territorial gift of Charles II to the Company. 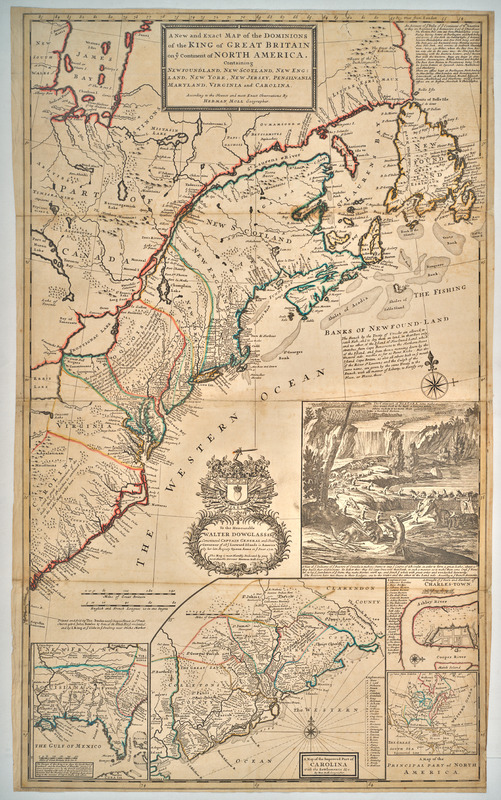 This map shows the realignment of territory in British favour as a result of the Treaty of Utrecht of 1713. In particular, the previously French-held Acadia is now subsumed within ‘New Scotland’ (or as it would come to be better known ‘Nova Scotia’), with everything north of the St Lawrence River simply identified as ‘Part of Canada’. The hand-coloured map includes numerous notes concerning territorial claims by Europeans and Native peoples, and the previously disputed Hudson’s Bay trade outposts have had their English names restored. It is best known for the vignette, a ‘view of ye industry of ye beavers of Canada’. It would seem that the artist, however, had never actually seen beavers in life, depicting them walking around on their hind legs like small bears with large tails. 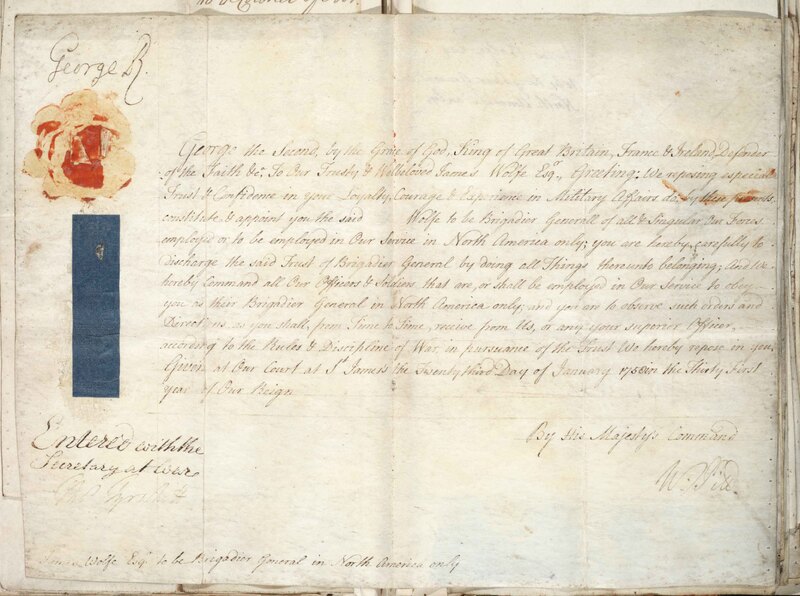 Royal Commission of James Wolfe as ‘Brigadier General of all & Singular our Forces in North America’. London, 23 January 1758.

This commission, signed by King George II (1683-1760) and countersigned by the Secretary of State for the Northern Department, William Pitt the Elder (1708-1778), represents the culmination of Wolfe’s extraordinary military career.  His first commission, dated 3 November 1741, had been as a Second Lieutenant in the Marine Regiment of Foot under the command of his father, Colonel Edward Wolfe (1685-1759). By 1758, at the age of thirty-one, he had been in military service for almost eighteen years and had seen action during the War of Austrian Succession (1740-1748), the later Jacobite plots in Scotland (1749-1751), as well as the Seven Years’ War against France (1754-1763). The Commission is engraved on vellum, was dated at St James’s Palace, and displays the wax remnants of the King’s papered seal, as well as the standard duty stamps. 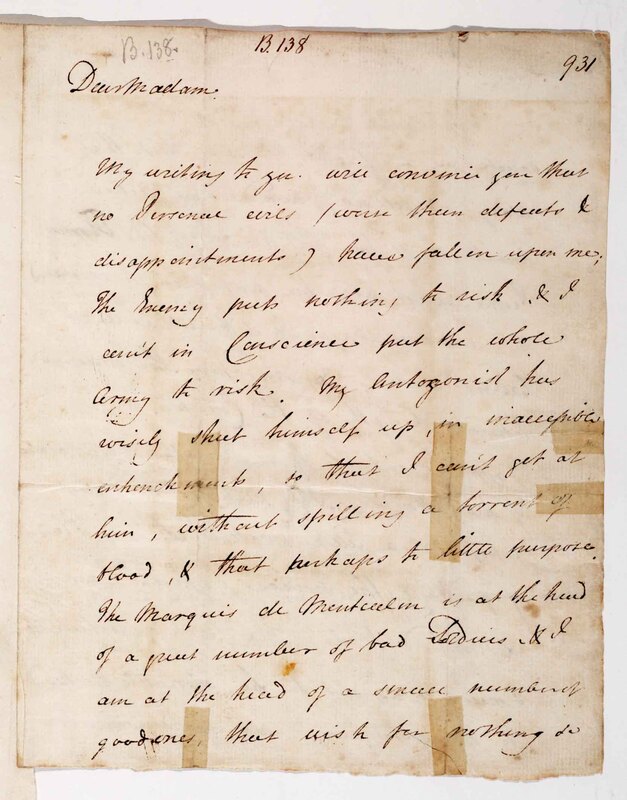 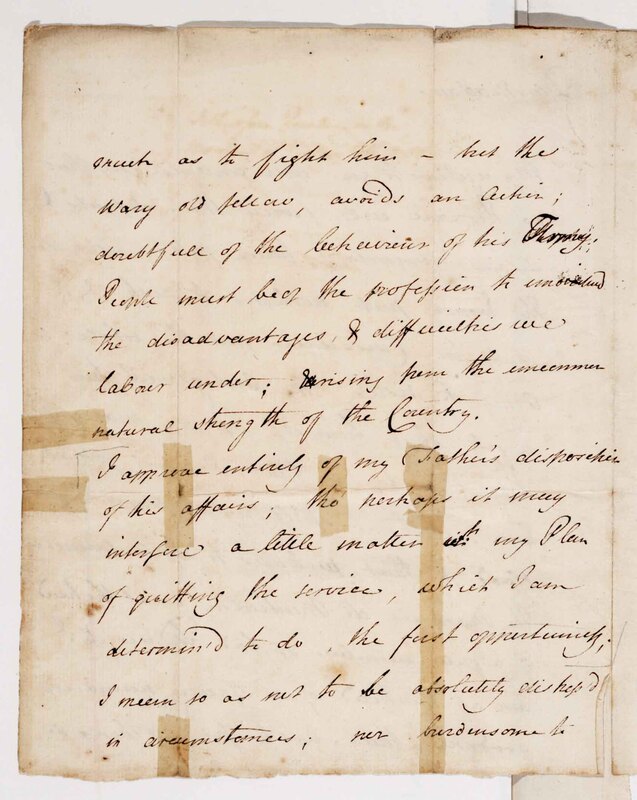 James Wolfe is remembered as the British hero of the Battle of Québec which occurred in September of 1759. He had already drawn blood in North America, however, at the Siege of Louisbourg, during which the French fortress on Cape Breton was taken on 26 July 1758, one of the most decisive battles in the Seven Years’ War. In this letter to his mother, he observes that ‘this will some time hence be a vast empire, the seat of power & learning. They have all the materials ready, nature has refus’d ’em nothing, & there will grow a people out of our little spot (England) that will fill the vast space’. Wolfe’s first preserved letter to his mother was written in 1740 just as he was preparing to board a warship off the Isle of Wight with his father, Edward. The last is written to his mother on 31 August 1759, only two weeks before the Battle of the Plains of Abraham. 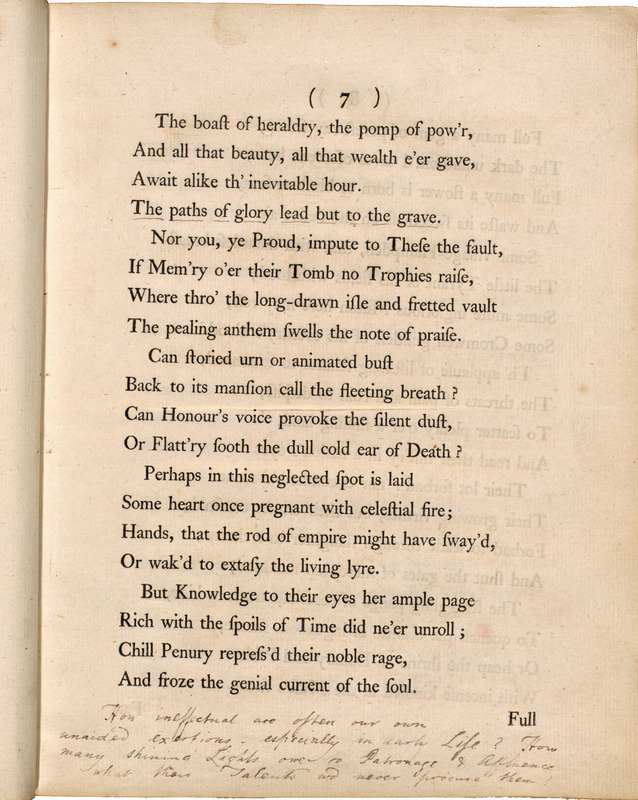 This otherwise unremarkable edition of Gray’s famous poem owes its importance to its association with General James Wolfe. It was presented to him by his fiancée Katherine Lowther shortly before he sailed from Portsmouth to Québec. It was during a period of ill health that he wrote the commentary found in the margins of the poem, words that display Wolfe’s naturally melancholy temperament. According to the testimony of his compatriots, on the eve of the great battle Wolfe declared: ‘Gentlemen, I would rather have written that piece than take Québec tomorrow’. Wolfe and his great adversary, the Marquis de Montcalm, were mortally wounded during the hostilities. With Wolfe’s victory, and the Treaty of Paris (10 February 1763) that followed, most of the remaining French territories in northeastern North America were ceded to the British. Wolfe’s copy of the Elegy was acquired by the Fisher Library, and celebrated as the University of Toronto’s seven millionth volume, in 1988. 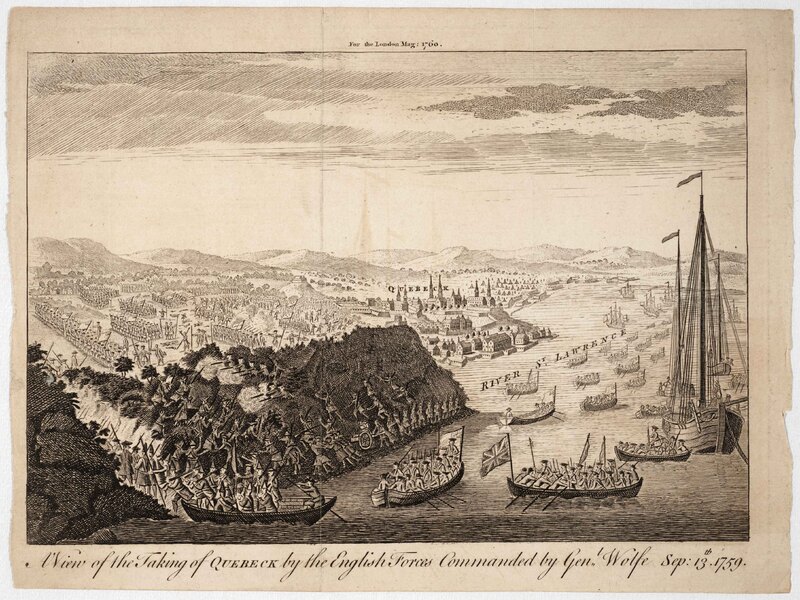 This copper engraving, depicting the movement of the British soldiers across the St Lawrence River in preparation for the attack on the French encampments at Québec, was made for the June 1760 issue of the London Magazine, the oldest cultural journal in the United Kingdom. The detailed engraving shows the three stages of the battle simultaneously: the disembarkation of the British, scaling the cliff, and the battle itself. While the artist is unidentified, its printing has been ascribed to Charles Ackers who was one of the five original partners in the magazine when it was first established in 1732. This attribution, however, is impossible since Ackers died on 17 June 1759, almost three months before the Battle of the Plains of Abraham itself occurred. 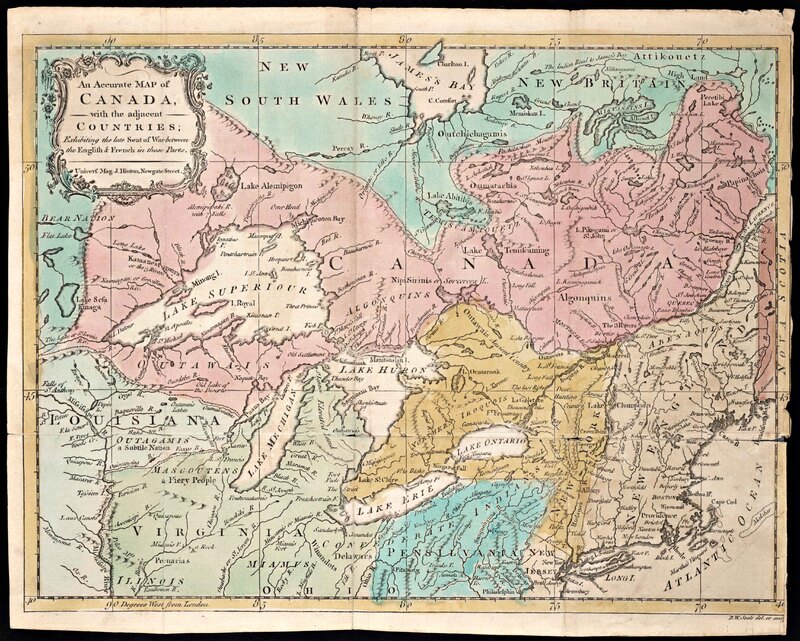 Richard William Seale (d. 1785). An Accurate Map of Canada with the Adjacent Countries: Exhibiting the late Seat of War between the English & French in these Parts.  London: Universal Magazine, J. Hinton, [1761].

Richard Seale was a draughtsman, engraver, and cartographer who worked in London for some forty years between 1732 and 1772. His style was influenced by the English mapmaker Thomas Kitchin, and he is perhaps best known for his contributions to the supplement to Rapin’s History of England, for which he provided maps of the military campaigns associated with the War of Spanish Succession. In this map, created in the aftermath of the Conquest of Québec, Seale demonstrates the extent of North American exploration up to the year 1761. With Wolfe’s victory, the Ohio Valley, which had previously been French territory, now came under British jurisdiction, which had implications both for trade and for westward expansion of the thirteen colonies. 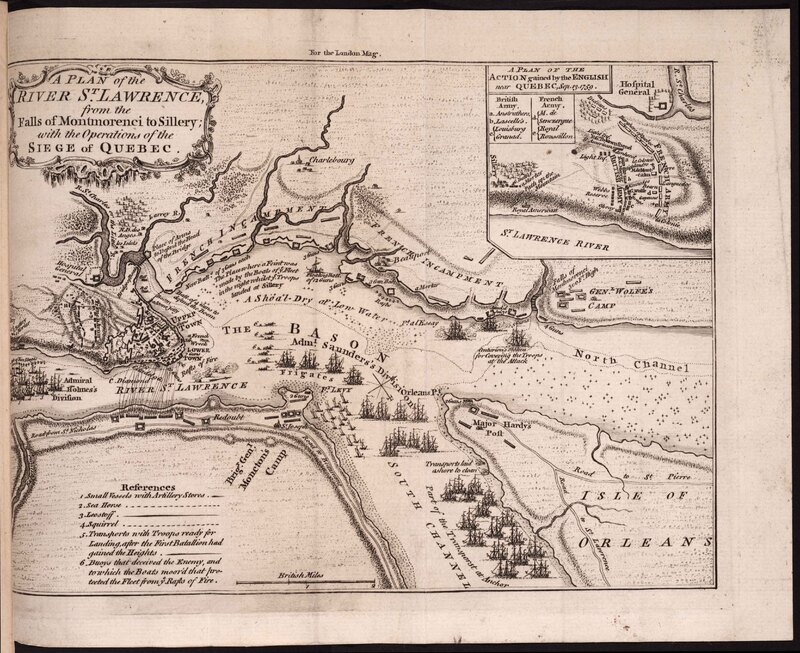 Ogden’s early poetic works were of a pious character, but they firmly established his reputation by the time The British Lion Rous’d appeared. This long, epic poem describing the course of the French and Indian War (1754-1763), and ending with the story of the Conquest of Québec, was published with an astonishing six hundred private subscriptions. It achieves in verse what Benjamin West’s famous painting will more effectively do: romanticize the death of Wolfe while simultaneously advancing a mythology of Britain as the divinely appointed protector of human freedoms. The Fisher copy is extra-illustrated with thirty-two engravings, four of which are folded, like this one depicting soldiers scaling the cliffs below the Plains of Abraham. 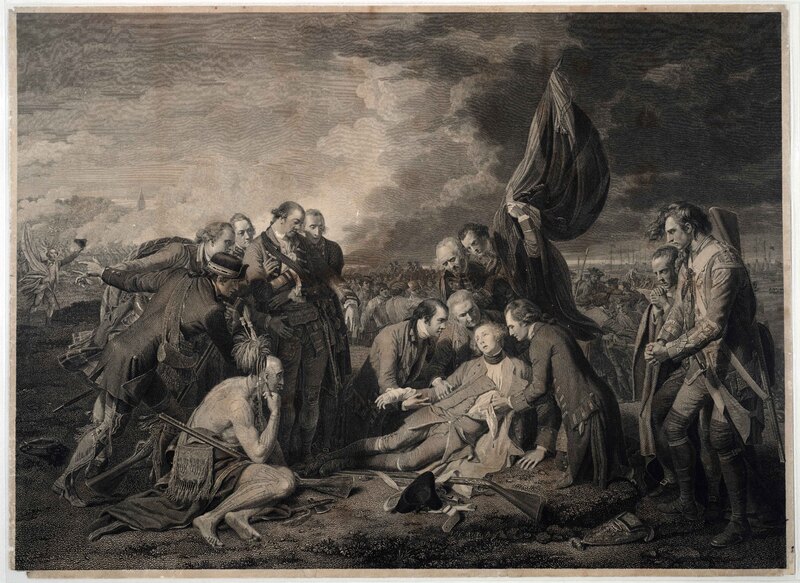 William Woollett’s engraving is considered by art historians to represent the highpoint of that artist’s career and is a faithful representation of West’s propagandistic masterpiece. In composition, the scene is reminiscent of the Christian Pieta, with Wolfe assuming the central position of the dead Christ. The painting is interpretive rather than factual, and many of the characters depicted were not actually present, while some who were are not shown at all. It has been suggested that the insertion of one’s portrait in the famous scene came at a cost of £100, and there is surviving correspondence to substantiate the claim. West’s original painting was presented by the Second Duke of Westminster to the people of Canada in 1921 in recognition of the nation’s contribution to the First World War, and hangs in the National Gallery in Ottawa. 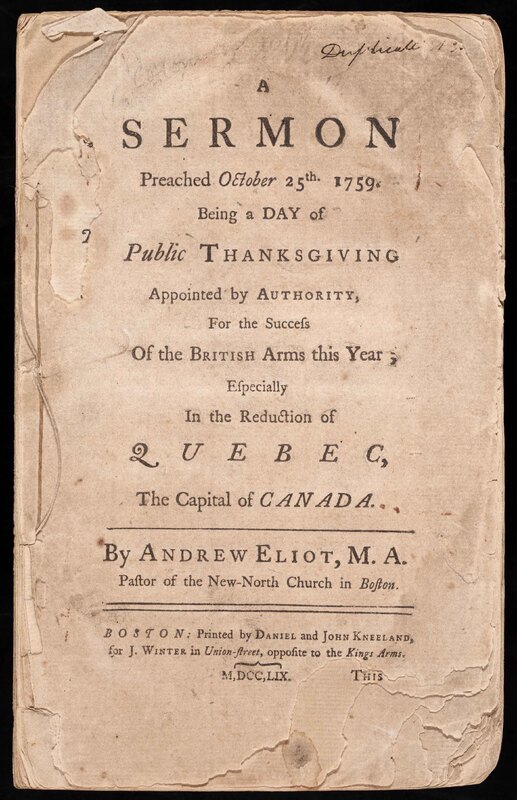 Andrew Eliot (1718-1778). A Sermon Preached October 25th, 1759 being a Day of Public Thanksgiving appointed by Authority for the Success of the British Arms this Year especially in the Reduction of Quebec, the Capital of Canada.  Boston: Printed by Daniel and John Kneeland for J. Winter, 1759.

This forty-one page sermon was preached by the Congregationalist minister Andrew Eliot in the New North Church in Boston. It is essentially an overview of the history of the previous 150 years of hostilities between the French and English in North America, situated within the context of Divine Providence. New England preachers, who were among the first to be alerted to the victory, did not hesitate to veer from the theological into the political in their celebrations of the event, seeing in the rout of the French the potential for British expansion across the continent in accordance with the divine will.