Part IV: The Struggle for Survival: The War of 1812 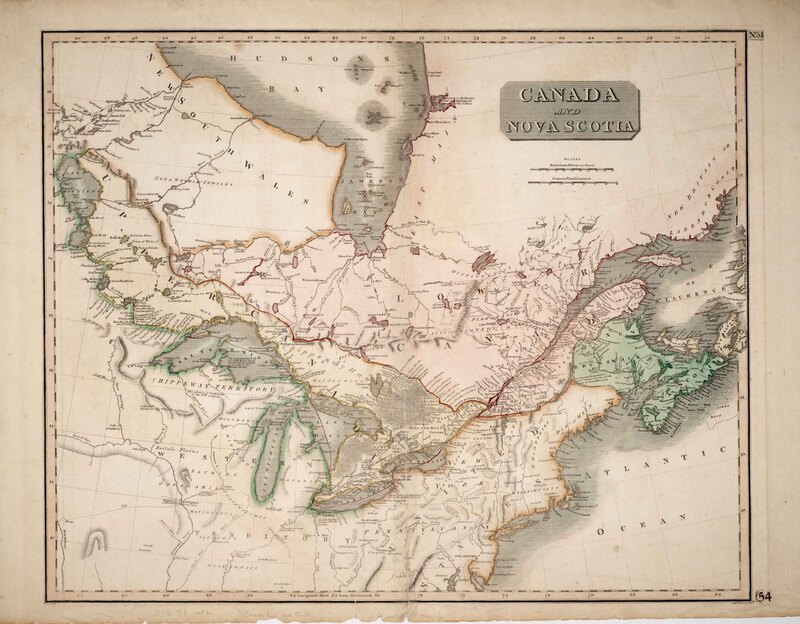 The hostilities that broke out by summer of 1812 on the border separating the United States from British North America have been justifiably described as a ‘Civil War’ of sorts. Given the porous nature of the boundary between the two jurisdictions, and the fact that, ever since the Revolution, populations had migrated back and forth in search of more and better land, it should not be surprising that militias were frequently composed of men who had relatives and friends fighting for the enemy. The origins of the War of 1812, however, are not to be found in North America but in Europe, where Britain had been engaged in the Napoleonic Wars since 1803. While the Americans had assumed a neutral position in the fighting, they were slowly drawn into the conflict by the disruption to their international commerce and the impressment of some of their sailors into the great British navy. British reversals on the normalization of trade with the United States in the spring of 1812 combined with outrage over the perceived threat to American sovereignty, leading to the declaration of war by President James Madison on 18 June of that year. Many Americans, however, had also long believed that the territory north of their border should naturally belong to them. It was assumed by some of their greatest power brokers that the conquest of British North America was inevitable and would be a relatively easy enterprise. Thomas Jefferson, for example, had stated as early as 1782 that ‘Providence has placed their richest and most defenceless possessions at our door.’ The survival of British North America was, however, assured by the end of 1814. Never again would the sovereignty of its borders be challenged by an invading military power. More importantly, what began to emerge was a sense of ‘Canadian’ identity, distinct from that of Britain as well as the United States. As the Québec Gazette would reflect, ‘One of the happiest results of the present war will be the sentiment of a community of interest binding us all in one harmonious whole, ever ready to render
one another mutual service." 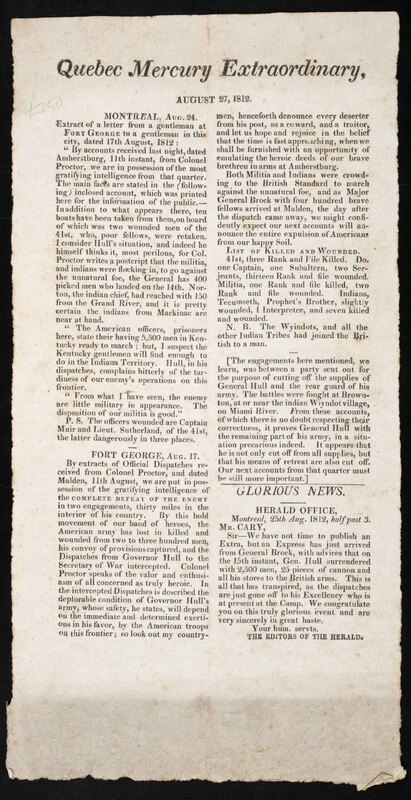 The Québec Mercury, an English language weekly founded in 1805 by Thomas Cary, particularly reflected the interests and concerns of British merchants who had settled in the colony after the Conquest. Throughout the War of 1812 it provided regular reports of the engagements between British and American troops, as in the case of this ‘extraordinary’ edition dated 27 August 1812, describing the defeat of the Americans by General Isaac Brock (1769-1812) at Fort Detroit two weeks earlier. The ‘extra’ also includes a brief, express note dated 25 August informing readers that General Brock had surpassed all expectations, receiving the surrender of William Hull (1753-1825) and 2500 of his men on 15 August, together with twenty-five cannon, and all of their stores. The report of Hull’s surrender was startling news on both sides of the border. 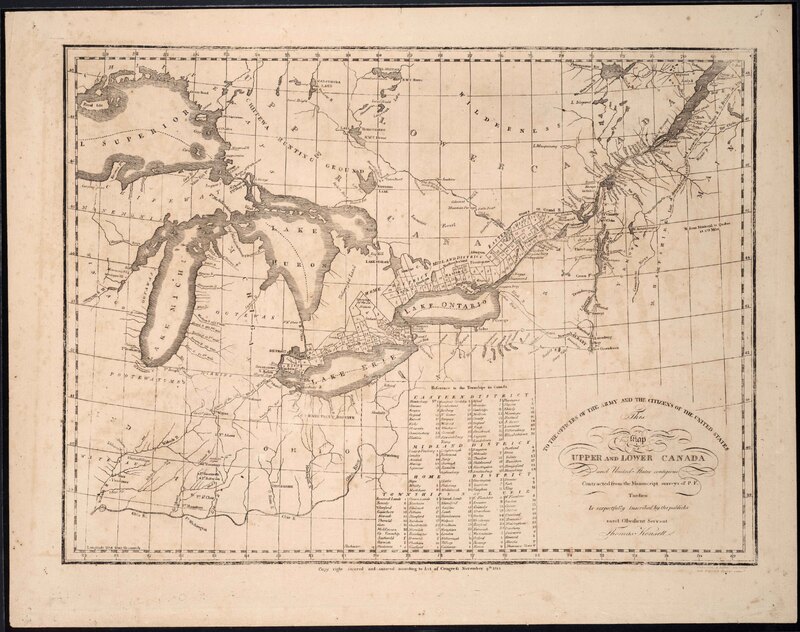 Thomas Kensett was an English artist who trained, among other places, at Hampton Court before immigrating to the United States in 1806. He engraved this map together with the Revolutionary War veteran and battle artist Amos Doolittle (1754-1832) from a manuscript survey executed by Pierre-François Tardieu (1757-1822). The map was duly entered into copyright by an Act of Congress on 4 November 1812, and is both rare and important. It was among the first to depict the area of the conflict stretching from Québec to Lake Superior, identifies forts on the American side, and provides a detailed record of the various townships and districts in the newly-settled Upper Canada. It appeared in at least five states between 1812 and 1815, with the Fisher copy being state two, and predates the formal British Declaration of War by seven months. Tardieu was a French artist and engraver principally known for his historical and genre works. 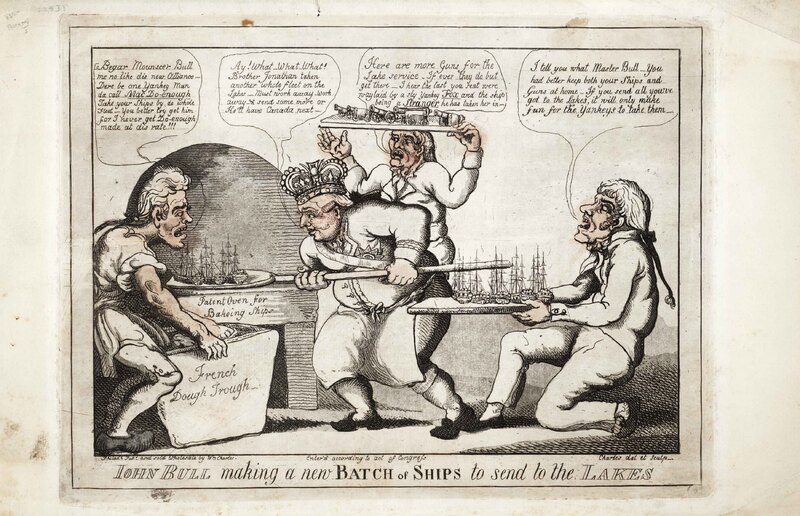 This rare caricature was executed, published, and sold by William Charles, the Edinburgh-born cartoonist who from around 1806 practised his trade in the United States, firstly in New York, and subsequently in Philadelphia. His caricatures were an integral part of popular war reportage south of the border, communicating the issues of the day with insight and humour. This caricature was strongly influenced by, if not copied from, Thomas Rowlandson’s High Fun for John Bull published sixteen years earlier in London. The cartoon is a reflection on the pivotal naval battles carried out in the spring and summer of 1814 on Lake Champlain and in Plattsburgh Bay during which the Americans, under the command of Thomas Macdonough (1783-1825), defeated the superior British naval fleet of Commodore George Downie (1778-1814). 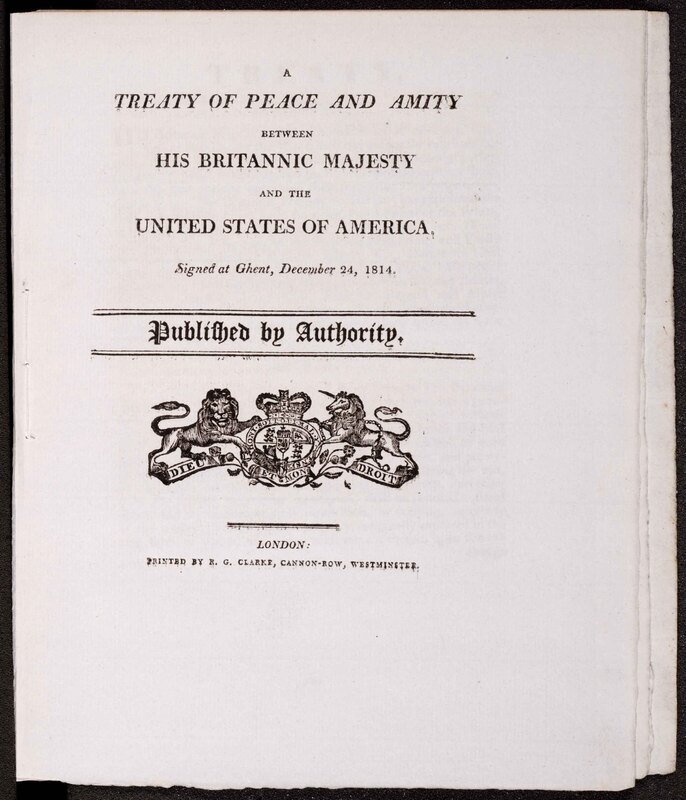 By 1814, the war had become a stalemate, and both the British and the Americans were eager for peace. On Christmas Eve of that year the nine articles of the Treaty of Ghent were signed, and it was agreed that hostilities would cease after ratification, which occurred on 17 February 1815. The parties agreed that captured territories and prisoners would be returned; outstanding disagreements over the border resolved by a future commission; and hostilities against the First Nations would cease by the Americans, while the British agreed to stop supplying them with arms. In fact, the Native Canadian allies would prove to be the biggest losers of the peace, since the British surrendered the idea of setting aside land for them to own and occupy in perpetuity. In Upper Canada, where the fighting had been most intense, the immediate legacy was a mistrust of all things American that endured for decades. 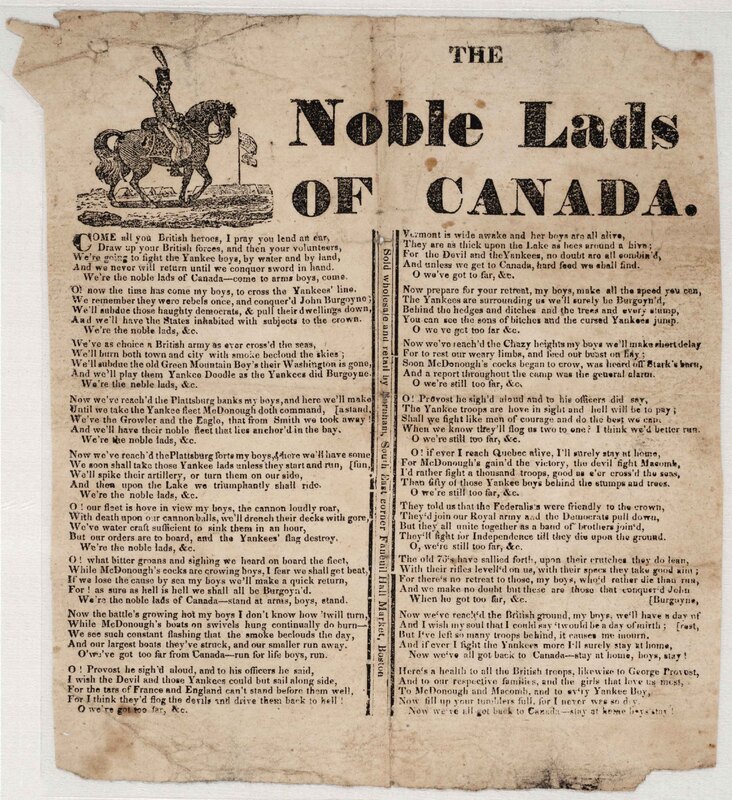 Francis Scott Key’s The Star Spangled Banner is undoubtedly the most famous song to have emerged from the War of 1812, but it was certainly not the only one. Despite its title, The Noble Lads of Canada is, in fact, a patriotic American ballad describing the Battle of Plattsburgh (6-11 September 1814), during which the victorious Americans killed 168 British combatants, wounded a further 220, captured 317 men, a frigate, a brig, and two sloops. The chorus begins with bravado but turns to desperation at the end, with a final exhortation, ‘We are too far from Canada, run for life, boys, run’. The lyrics are attributed to Lemuel Orcott, a New Hampshire Methodist deacon and blacksmith who immigrated to Potton, Québec in 1811. It was especially popular as a working song throughout the nineteenth century, and was reportedly sung at barn-raisings and husking-bees, particularly in New Hampshire and Vermont.