Case I: The Earliest Horticultural Writing

The earliest recorded texts describing plants emerged out of an ancient tradition of first-hand knowledge. Botanical expertise was vital for existence, because people depended on plants for food, clothing, shelter and medicine. They were familiar with literally hundreds of species and understood the seasonal cycle and the life cycles of plants, how to clear or alter vegetation with fire, sow seed and plant tubers. The process of plant domestication resulted in the basic techniques of agriculture and horticulture becoming well established in the cultures of antiquity whose legacy to us was the creation of the first written record of horticultural knowledge. This first section of the exhibition traces the evolution of our knowledge of plants through the early Greek and Roman texts beginning with Theophrastus, through the European herbal tradition, and finally to the first true work of horticulture in England early in the seventeenth century. 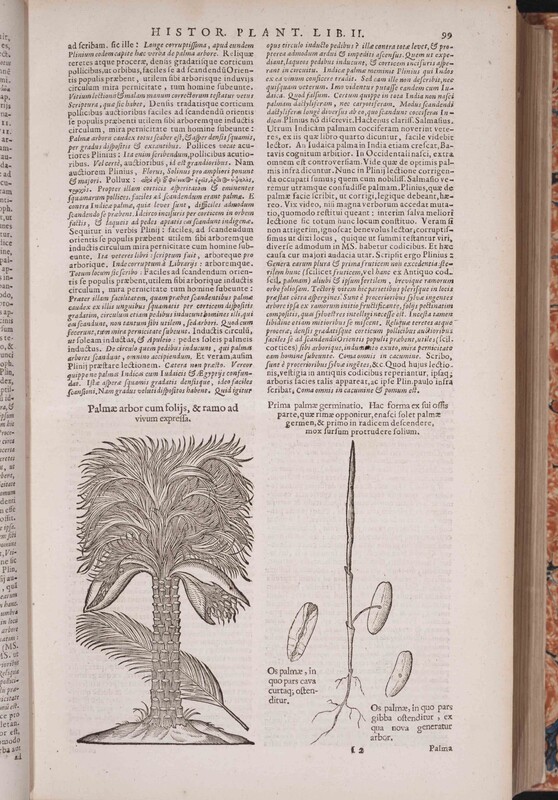 Honoured as the father of botany, Theophrastus studied with Aristotle under Plato and is responsible for the first scientific and philosophical investigation into the nature of plants. One of the most cited editions of Theophrastus is this 1644 folio edition in which the text, edited by Johannes Bodaeus (d. 1636), incorporates the earlier commentary of two other editors. The book is open to the section on the date palm (Phoenix dactylifera) where Theophrastus describes the process of artificial fertilization.  Knowledge of the technique of pollinating the date palm was known from very ancient times - there is a reference to it in the Code of Hammurabi, dating to about 1700 B.C. Although it was known that the female palm needed to be fertilized with the pollen from a flowering branch of the male tree, sexual reproduction in plants was not fully understood until the seventeenth century. 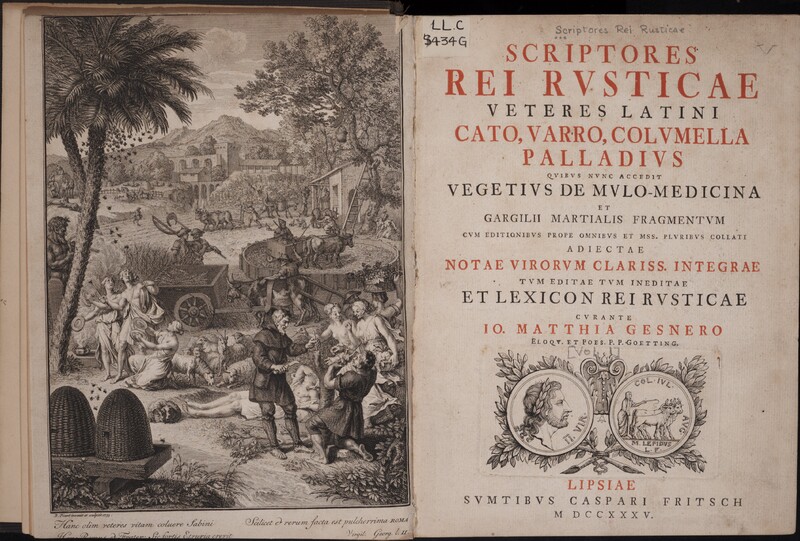 The four Roman writers whose texts on agriculture have survived are, in chronological order, Marcus Porcius Cato (234-149 B.C.), Marcus Terentius Varro (116-27 B.C.), Lucius Junius Moderatus Columella (approx. 4 B.C. – 65 A.D.), and Rutilius Taurus Aemilianus Palladius (4th century A.D.). The works of these four writers on agriculture are often discussed together and indeed are frequently found published together in a single volume, under the general title Scriptores rei rusticae. This edition edited by Gesner is considered to be one of the best, including copious commentaries and notes. The engraved illustrated title page depicts a variety of idealised agricultural tasks including ploughing, sowing and harvesting (all taking place simultaneously), and grafting.

The earliest printed work on agriculture is this one by Pietro de Crescenzi which was first published in 1471. This German edition of the 1490s was the first to be illustrated, and contains woodcuts depicting plants, animal husbandry, and agricultural and horticultural techniques such as planting trees, grafting and propagating by taking cuttings. The Fisher copy survives in its original binding of tawed pigskin over oak boards, with brass and pigskin clasps. 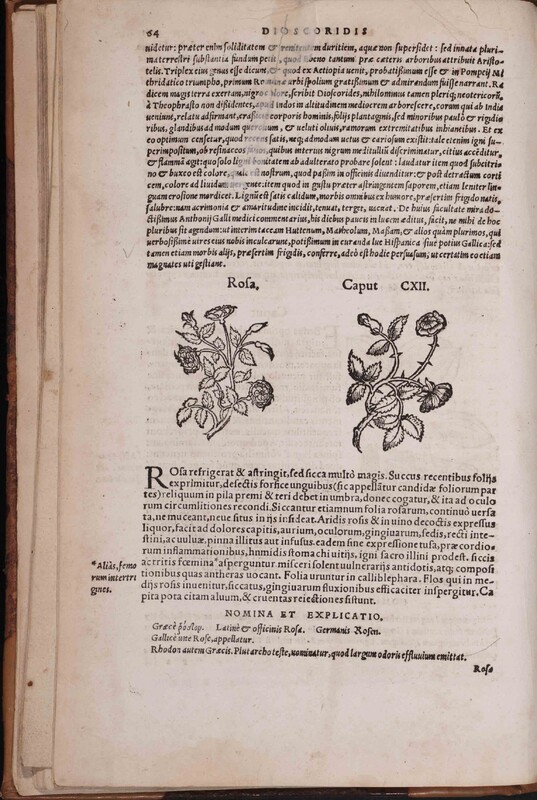 Dioscorides was a Greek physician who wrote an authoritative work on the therapeutic uses of plants, De materia medica, which contained entries on some six hundred plants, about one hundred more than were described by Theophrastus two centuries earlier. On display is one of the many editions of the Latin translation of Dioscorides by Jean Ruel (1479-1537) first published in 1516. In chapter CXII, headed ‘Rosa’, Dioscorides outlines the many medicinal properties of the petals, leaves and hips of the rose, which he begins by describing as ‘cool and astringent’. Rose extracts of various types can be used to treat headaches, eye and skin infection and wounds, and pain of the perineum, intestine, rectum and vulva. Dioscorides’s text is printed in roman type immediately beneath the illustration, with Ruel’s commentary following this in italic. 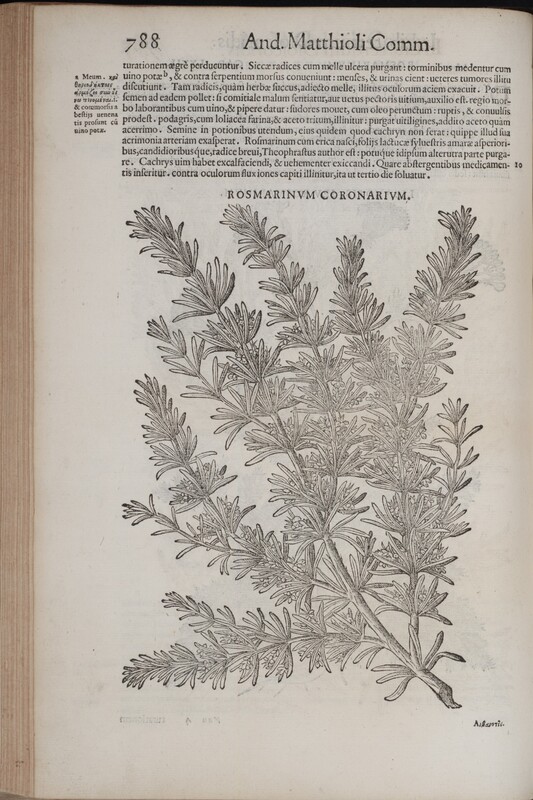 One of the most important of the later commentators on Dioscorides was Pietro Andrea Mattioli (1501-1577), who graduated from the renowned medical school at Padua, practised medicine in Italy and later became physician to the Emperor Maximilian II in Prague. Valgrisi was a distinguished Italian printer of illustrated books who issued a number of editions of Mattioli’s text. The 1565 edition on display added three hundred new illustrations of plants by the team of Giorgio Liberale and Wolfgang Meyerpeck, many of which were full-page size. The woodblocks for these continued in use in subsequent editions until 1604. There is a notable improvement in accuracy between the depictions of the rose in the earlier and later editions on display. 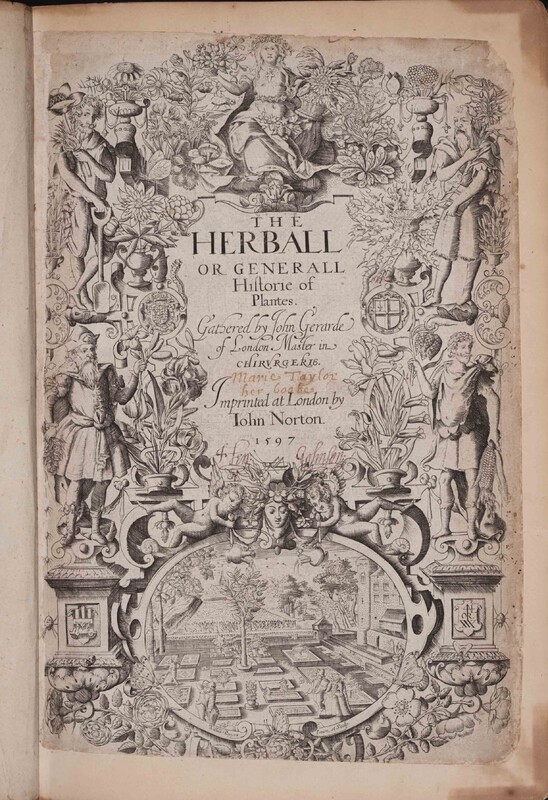 English herbals of the sixteenth century were produced by those with medical training and continued the tradition of describing the therapeutic uses of plants. John Gerard trained as a surgeon but although his passion for plants may have begun with an interest in their medical properties, he was known for his outstanding garden near his London home in Holborn.  In his herbal he includes some plants which have no medicinal uses but are valued for their flowers, such as tulips. He begins by describing it as a ‘strang and forraine flower’ valued ‘because of that excellent diversitie of most brave flowers which it beareth’. In the section of the description where the plant’s uses are usually enumerated Gerard simply writes: ‘There hath not been anything set downe of the ancient or later writers as touching the nature or virtues of the Tulipaes, but [they] are esteemed especially for the beautie of their flowers’. 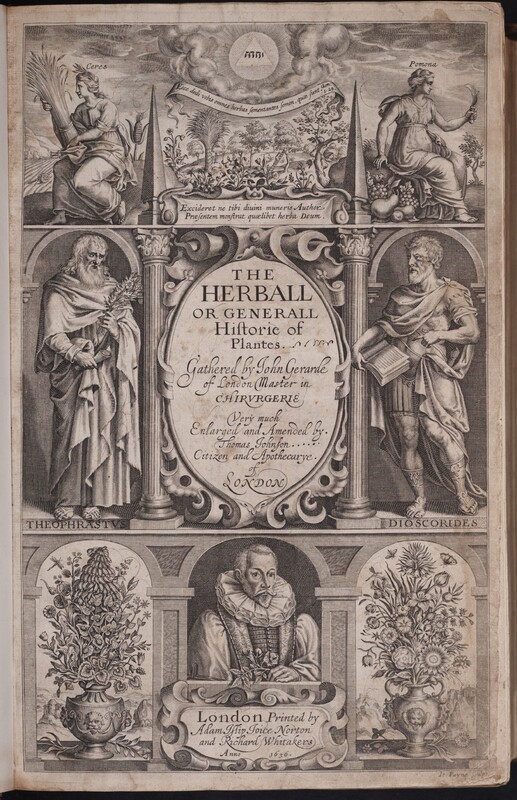 Thomas Johnson (d. 1644) was a London apothecary with a great interest in botany who updates, corrects and augments Gerard’s text, increasing it from the original 1392 to 1630 pages. For example, he describes a plant now known as bog chickweed or bog starwort (Stellaria alsine). This plant is numbered twelve in the list and has been given the name creeping water chickweed or Alsine palustris serpillifolia. In Gerard’s original chapter on chickweed he had described only ten types, and Johnson has been able to add descriptions for three more (numbers 11-13) which are marked off in the text with a double dagger symbol at the beginning and end of the additional text. The illustration, also marked with a double dagger indicating it is new, is small and would be quite difficult to use as the basis for identification without the detailed description.