Field botanising has a long tradition and some of the earliest accounts we have of British gardeners seeking out and studying their own native plants are the two published accounts of Thomas Johnson, Iter plantarum investigationis in 1629 and Descriptio itineris plantarum in 1632. He and his apothecary friends went into what was then countryside in Kent and Hampstead, studying wild plants, chieﬂywith a view to their medicinal and other useful properties.

Explorers and emigrants to Canada encountered unfamiliar plants, learning from ﬁrst nations people their many uses for food, medicine, and dyes, and introducing some to their gardens. The ﬁrst Canadian ﬂora, or written description of native plants, is Cornut’s Canadensium plantarum of 1635. Jacques Philippe Cornut (1606–1651) was a Parisian physician who never visited Canada himself but obtained plants from an extensive network of gardeners and nurserymen. He was also able to study North American plants in the Jardin du Roi, many of which had been sent back to France by missionaries. Jesuit priests were particularly important agents in New France because theywere encouraged by the state to gather native species, to grow them in test beds, and then to send plants and seeds back to France for further study. 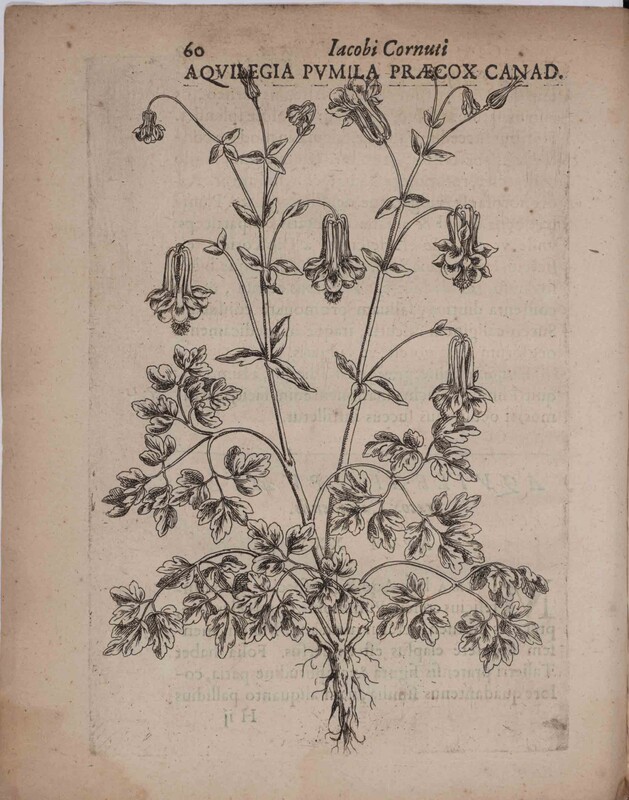 The first Canadian flora, or written description of native plants, is Cornut’s Canadensium plantarum of 1635. Over thirty species from eastern North America are described by Cornut for the first time, a number of which still retain the names assigned by him, ending in ‘canadensis’.  The book is open to the plate depicting our native columbine ‘aquilegia pumila praecox canadensis’. 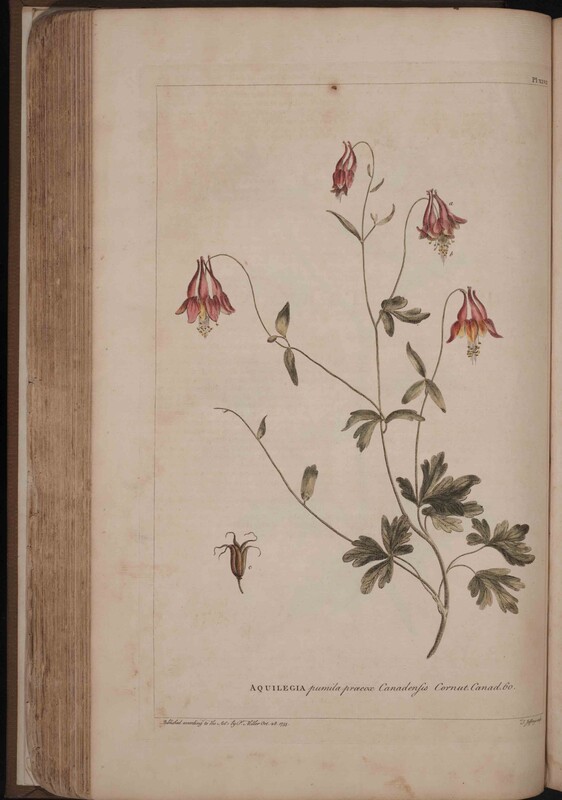 Over a century after Cornut’s work was published, Philip Miller, who grew Aquilegia canadensis in the Chelsea Physic garden, also described and illustrated the plant, citing Cornut as the source for the name in the plate’s title. 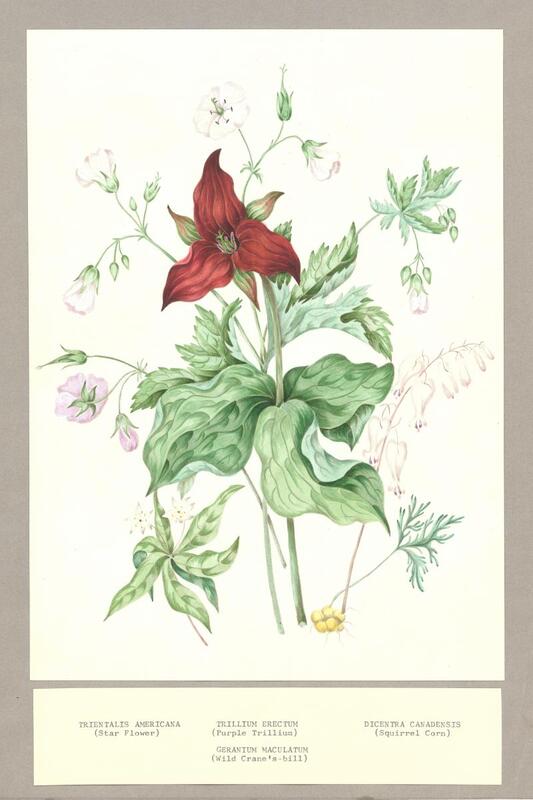 One of Canada’s most remarkable amateur botanists was Catherine Parr Traill (1802-1899) who appreciated the beauty of the wild plants and flowers she encountered in her new home in southern Ontario, publishing descriptions of them in the four editions of Canadian Wild Flowers issued between 1868 and 1895, and in Studies of Plant Life in Canada in 1885, both illustrated by her niece Agnes Fitzgibbon Chamberlin. Chamberlin produced many lovely water-colour sketches of individual plants, such as this one of the birthroot or red trillium. When preparing the ten full-page illustrations for her aunt’s Canadian Wild Flowers, Chamberlin grouped several plants on each plate, in order to make a more decorative effect, and to show more types of plants.

With the exception of Quebec, whose floral emblem at the time was the long-cultivated Madonna lily, the other provinces and territories all had a wild flower as their floral emblem in 1967. As part of the celebrations during Canada’s centennial year, these floral emblems were coaxed into bloom in late summer by Lawrence Sherk, horticulturist in the Research Branch of the Central Experimental Farm in Ottawa and placed on display to the public at the Canadian National Exhibition in Toronto. The pamphlet describes and illustrates each flower, and gives precise instructions for propagating and growing them in garden conditions. The booklet is open to show Alberta’s emblem, the wild rose (Rosa acicularis), which grows in large parts of the country from British Columbia east to Quebec.

Globalization in the plant world has been the result of travellers encountering plants previously unknown to them, and bringing them back home to cultivate locally. It is known that Queen Hatsepshut transported frankinense trees (Boswellia sacra) from Somalia to her temple at Deir el-Bahri, Egypt around 1500 b.c. as these are shown in a mural being carried with their roots in baskets, very like our balled and burlapped nursery stock of today. Plant hunting and plant introductions have continued without interruption to the present day.

During the time of Alexander the Great the Greeks introduced lemon and peach trees from Persia, and the Romans imported the plane tree (Platanus orientalis) from Greece. Three centuries of Roman rule and culture brought to Britain such plants as the opium poppy, sweet cherries, and probably the grape vine. By the mid-sixteenth century there were some ﬁfty species of foreign plants in Britain, including rosemary (introduced in 1338 and discussed in the preface), the sycamore tree, hops, and particularly new fruit trees such as the apricot, introduced in 1542. Over one hundred acres of orchards were planted in Kent around 1533 by the King’s Fruiterer, Richard Harris.

The ﬁrst generations of plant collectors and explorers tended to concentrate on the search for useful plants, with obvious commercial potential. However, the Horticultural Society of London had a network of correspondents around the globe, as well as employing their own plant collectors, whose mandate was to locate and send back garden-worthy plants. John Reeves (1774–1856), an employee of the East India Company stationed in Canton sent many plants from China beginning in 1817, including azaleas, camellias, chrysanthemums and moutan or tree peonies. In 1843 following the Treaty of Nanking which ended the war with China, Robert Fortune (1813–1880) was sponsored by the Horticultural Society to secure new hardy ornamental plants. Fortune was responsible for introducing many beautiful garden plants from China, which were subsequently described and illustrated in the botanical and horticultural periodicals of the day. 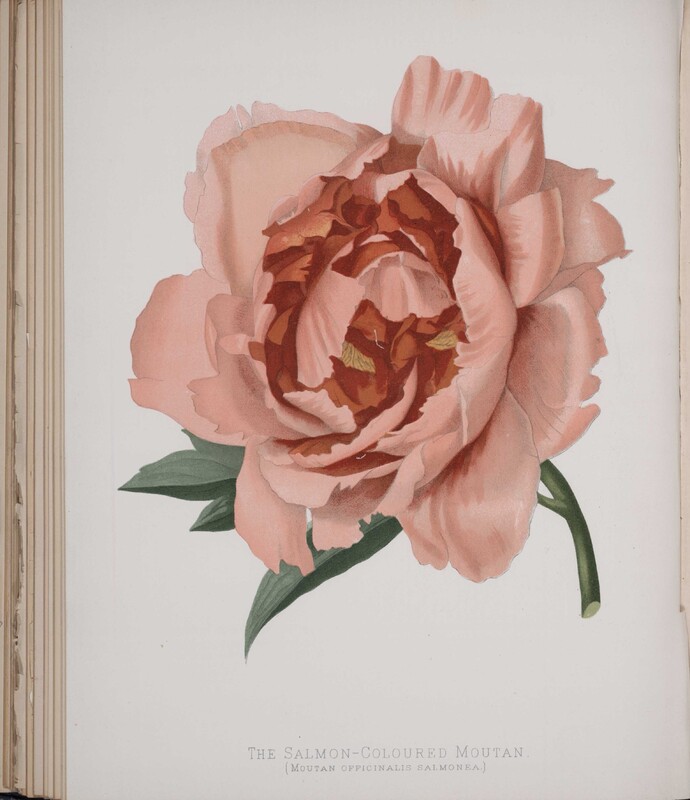 The Horticultural Society of London had a network of correspondents around the globe, as well as employing their own plant collectors, whose mandate was to locate garden-worthy plants. In 1843 following the Treaty of Nanking which ended the war with China,  Robert Fortune (1813-1880) was sponsored by the Horticultural Society to secure new hardy ornamental plants. Fortune was responsible for introducing many beautiful garden plants from China, which were subsequently described and illustrated in the botanical and horticultural periodicals of the day. In his account of his trip, Three Years' Wanderings in the Northern Provinces of China, Fortune recounts his search for new varieties of the tree peony or moutan, and describes the beauty of the flowers he saw growing in a nursery around Shanghai, including those in unusual colours such as dark purple and deep red. On display is a plate depicting ‘The Salmon-Coloured Moutan’, one of the tree peonies which Fortune sent back to the Horticultural Society in 1846.