Cases VII: Flower and Garden Shows and the Special Role of Nurseries and Public Education

Another very helpful learning opportunity is provided at garden and ﬂower shows, where members of the public have the opportunity to see a great variety of plants, often with a focus on the newest or very best examples of a particular species, which are judged and awarded prizes according to strict criteria. The debate for and against such competitive garden shows continues to this day. The Victorian argument in favour of such shows was that the opportunity to see plants grown to perfection oﬀered an incentive to others to strive harder. On the other hand, such shows are often criticized for their artiﬁciality and exclusivity, and Victorian gardener and journalist William Robinson was the ﬁrst of many to note in 1876 in his periodical The Garden that ‘the real tests of the gardener’s skill and taste are in the garden and not at the “Show”’. Nevertheless, their enduring popularity is a testament to their continued relevance, or perhaps just to the gardener’s desire to see beautiful plants in all seasons. In Canada, the fragrance and colour of ﬂowers at events such as Canada Blooms in Toronto, coming at the tail end of our long winter, is a welcome sight and a promise of the growing season to come 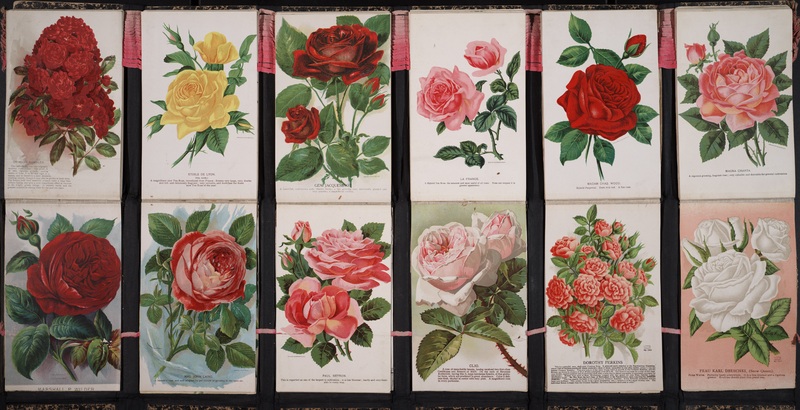 The Special Role of Nurseries and Public Education

Nurseries play a crucial double role in horticulture – they are the main source for developing and disseminating plants to the public, and they act as an important educational resource on how best to grow them, based on hands-on professional experience. As a commercial enterprise, they have a vested interest in ensuring that the customer is satisﬁed with the plant material purchased, and that the customer has been given the necessary knowledge to grow those plants successfully in their own gardens. The educational role of nurserymen was an important factor from very early in their history. The famous nursery at Brompton Park founded in 1681 by several gifted professional gardeners including George London (ca. 1640–1713), dominated the market in the late seventeenth and into the eighteenth century. George London had trained with royal gardener John Rose, and had been employed by such eminent plantsmen as Henry Compton, the Bishop of London (ca. 1632–1713). By 1688 the partnership consisted of London and Henry Wise, and the business was run as a combined landscape design service and nursery. London and Wise worked together on some of the most important formal gardens of the day, including Chatsworth and Hampton Court. John Evelyn included an advertisement for London and Wise’s nursery in his 1693 translation of the work of Jean De la Quintinie (1626–1688), gardener to Louis XIV, The Compleat Gard’ner. London and Wise produced their own abridged edition of this work in 1699, retaining Evelyn’s introduction from the earlier edition. 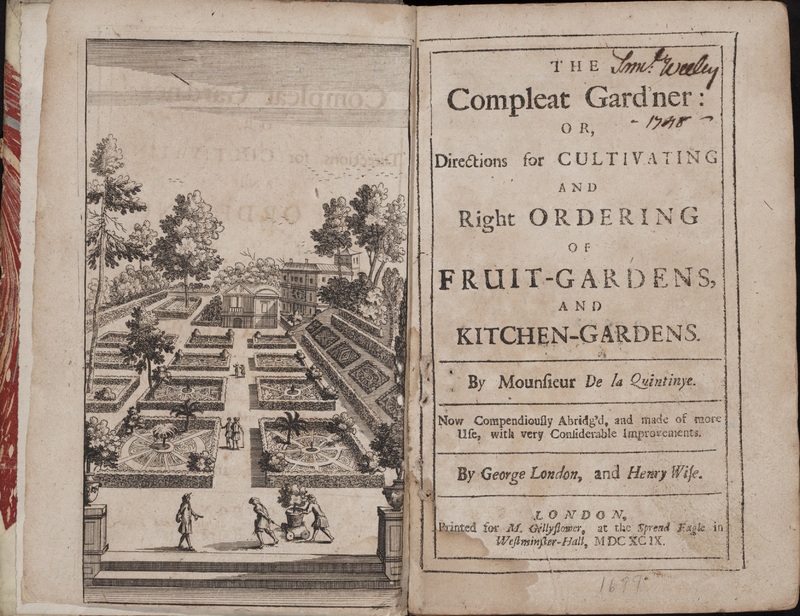 Jean de la Quintinie (1626-1688). The Compleat Gard'ner, or, Directions for Cultivating and Right Ordering of Fruit-Gardens, and Kitchen-Gardens ... now Compendiously Abridg'd, and Made of More Use, with Very Considerable Improvements by George London and Henry Wise. London: Printed for M. Gillyflower ..., 1699.

Jean de la Quintinie was the foremost gardener in France, responsible for the Potager du Roi for Louis XIV at Versailles, and he was an expert in fruit culture and pruning.  In the seventeenth century French horticulture was far in advance of that in England, and John Evelyn (1620-1706), who travelled widely in France, introduced some of the new techniques to Britain, including espalier (training branches of fruit trees so that they grow in a formal pattern on one plane). Nurseries often play a key role in the dissemination of horticultural knowledge to the general public. The nurserymen George London (ca. 1640-1713) and Henry Wise (1653-1738) produced this abridgement of Jean de la Quintinie’s landmark work, which was a smaller, more affordable and practical version of Evelyn’s translation, intended for working gardeners. 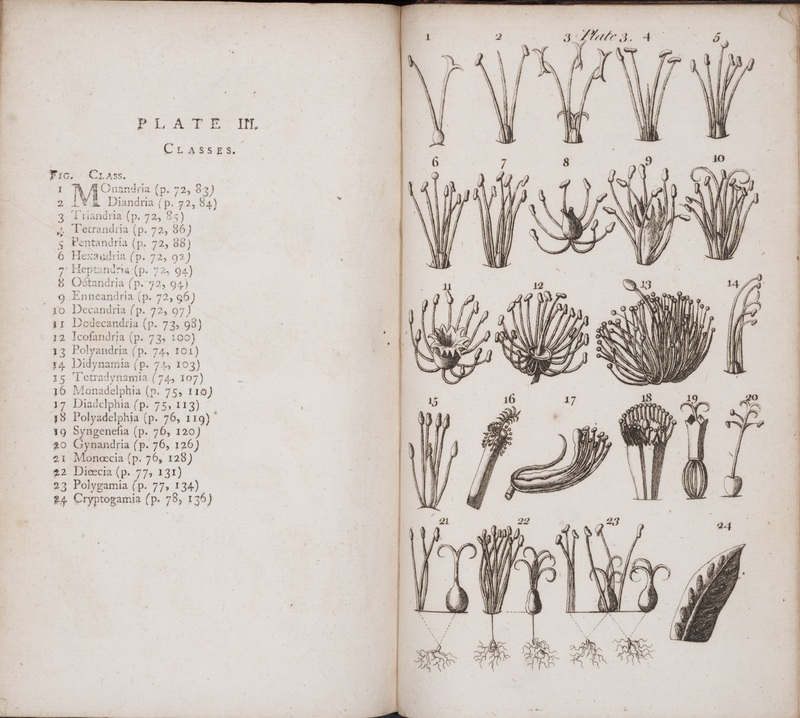 The Vineyard Nursery at Hammersmith operated by James Lee and  Lewis Kennedy (1721-1782) and later by their descendants, was certainly one of the finest in Britain. James Lee was the first to translate Linnaeus into English. His Introduction to Botany was largely a translation of the Philosophia botanica of Linnaeus, published in Latin in 1751, which was an overview of Linnaeus’s thinking to that point on matters of taxonomy as well as nomenclature. Plate three illustrates the twenty-four classes of plants devised by Linnaeus. His classification scheme was a simple one in which all plants were categorized according to sexual characteristics. Linnaeus’s system was based strictly on the number of stamens, the male parts, and the number of styles, the female parts. The twenty-four classes take their names from the number of stamens: for example the first, monandria, signifies a flower with one stamen. 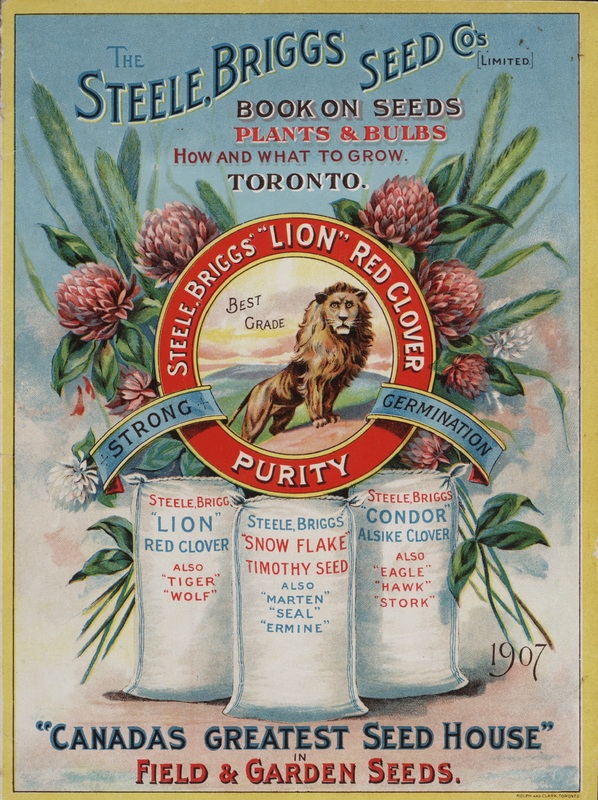 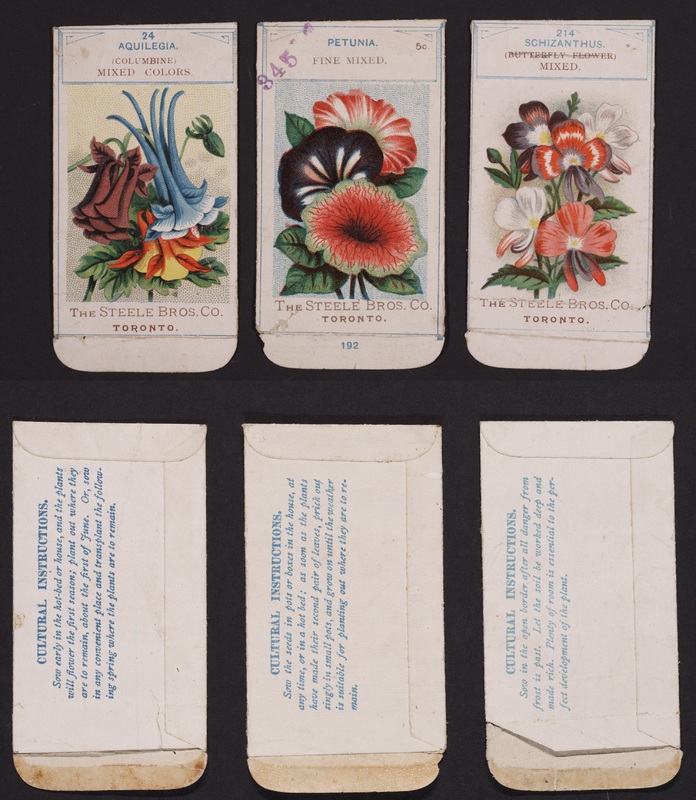 Most nurseries and seed distributors play an educational role by issuing a simple printed guide to cultivation, like this one issued by the Canadian seed firm Steele,  Briggs, which provides basic horticultural advice along with the seeds or plants they sell. The planting and cultivation instructions on the backs of seed packets are often the first and only easily accessible source of information available to the home gardener. The major seed companies in Toronto in the late nineteenth century were William Rennie, George Keith, J.A. Simmers and Steele Briggs, all of which ran mail order operations, supplying seed to gardeners across the country. Shown along with the guide here are three examples of the company’s seed packets from approximately 1890 and their catalogue for 1907. An 1890 advertising poster is on display in the reading room. 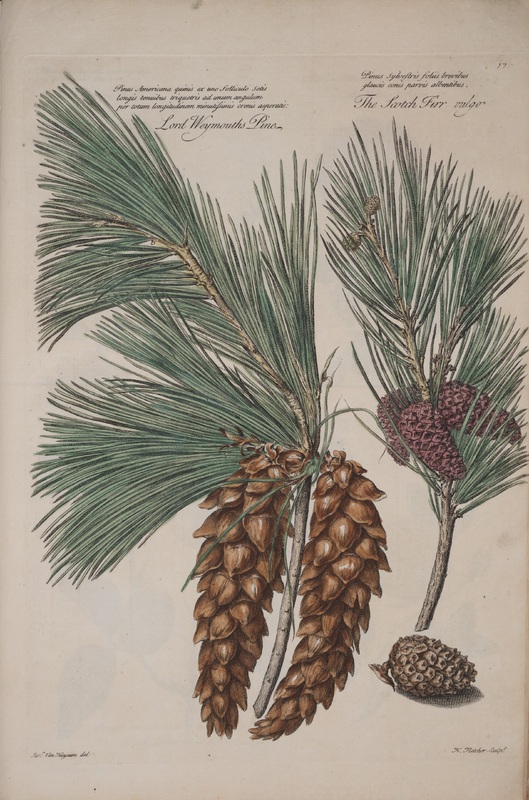 Catalogus plantarum ... A Catalogue of Trees, Shrubs, Plants, and Flowers, both Exotic and Domestic, which are Propagated for Sale in the Gardens near London. London: Printed for the Society of Gardeners, 1730.

This lavish catalogue was issued by a group of nurserymen around London who met regularly to examine and compare plants in order to eliminate confusion about nomenclature and arrive at a consensus as to the most appropriate name for a given plant. They decided to publish the results of their deliberations by issuing a joint catalogue of the trees, plants, flowers and fruits currently being grown in the gardens of the members. This plate depicts two species of pinus. Although the Weymouth pine had been imported from North America early in the previous century by a Capt. George Weymouth, it seems to have been named in honour of Viscount Weymouth who planted it in large numbers at Longleat beginning in 1705. This particular tree, the eastern white pine (Pinus strobus), which is now the provincial tree of Ontario, was one of the American imports frequently used in creating the landscape gardens of the time. The Scotch Pine (Pinus sylvestris), is described as ‘commonly but falsely called the Scotch fir’. 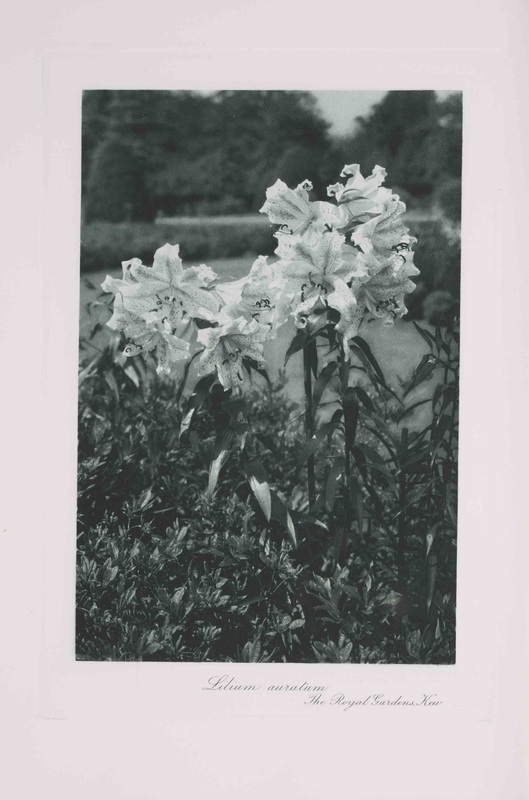 The first role of a nursery is to supply the public with plants, and nurseries are constantly looking for improved varieties to offer to their customers. New introductions are the result of either hybridization and selection, or the discovery of previously unknown forms. Both these aspects of horticulture are evident throughout the long history of the Veitch firm. James Veitch Jr. wrote this history of his family’s firm which gives details of the botanical collectors and hybridists who worked for the company, and includes a list of ‘the most remarkable of their introductions.’ Among the plants first introduced to the commercial market by Veitch were many orchids, but also such well-known garden plants as Berberis darwinii. The longest and most effusive description in the book is not for an orchid, but for Lilium auratum, introduced by John Gould Veitch in 1862. James Veitch writes of it that ‘when the day comes that the House of Veitch must pass, it may well and safely leave its laurels with the “Golden-rayed Lily of Japan”’. Lilium auratum, in turn, was the ancestor of innumerable new garden lilies marketed today. 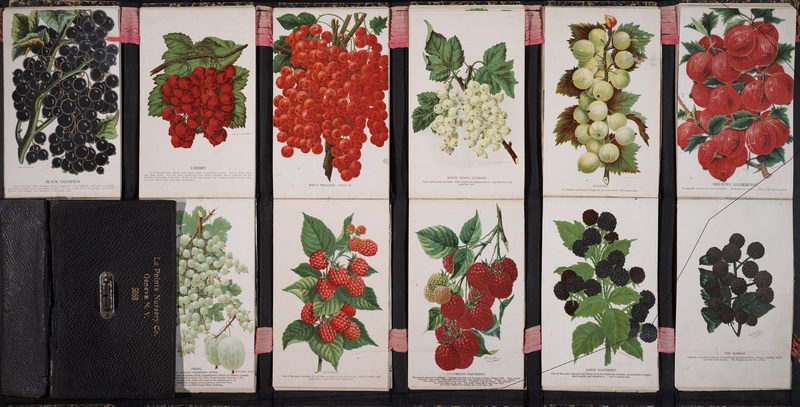 The illustrations depicted in this sample book are predominantly of fruit and other useful plants but some ornamentals are also included, particularly roses. This example contains a total of 204 plates, mounted in thirty-four rows of six, the plates in each row joined together by cotton tapes, folding into a wallet- style black leather cover. The fruit section includes forty-ﬁve kinds of apple, thirteen pear, thirteen peach and twelve cherry, in addition to plums, apricots, quince, grape and other soft fruit.