The Kitchen Garden: Fruit and Vegetables

The cultivation of fruit, vegetables and culinary and medicinal herbs for domestic use in a segregated, usually walled or hedged enclosure, has classical roots and can still be found all over the world today. The formal square or rectangular garden laid out in a grid-like pattern which we associate with kitchen gardens arose out of a bed and channel system, devised inMediterranean gardens which required irrigation. Long narrow raised beds were divided by paths which doubled as water channels. In Britain, although there was suﬃcient year-round rainfall, the same overall design of straight beds divided by paths was adopted as the model, and continued in use after the fall of the Roman Empire. The advantages of sowing seed in rows to facilitate thinning, weeding and watering is evident to any gardener. The beds can be of any length, but all writers from the classical period on recommend that they be no wider than twice an arm’s length so that plants can be cultivated from each side without walking on the beds. 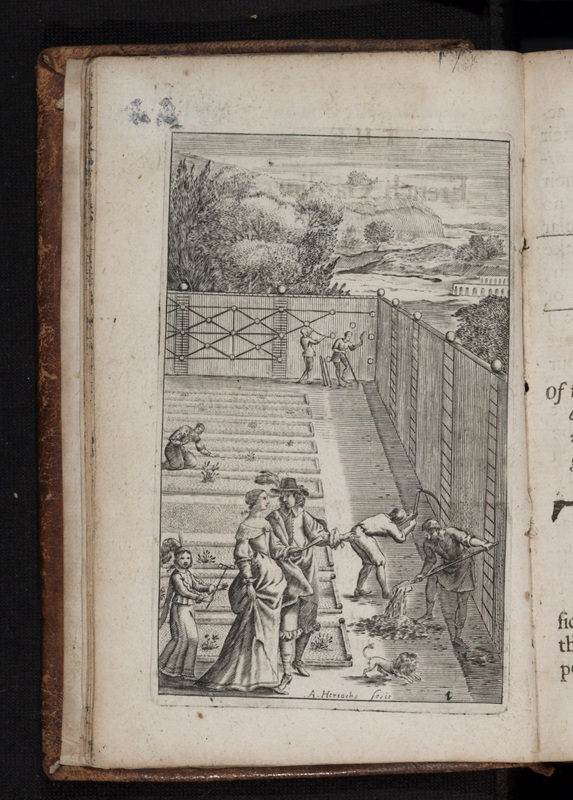 Vegetable growing has long been a fundamental component of home gardening, and is often the first means of introducing people to horticulture. The first horticultural publication by influential writer, gardener and diarist John Evelyn was this one on vegetables – a translation of Nicolas de Bonnefons’s Le jardinier françois. Evelyn considered this the best work on vegetable gardening then available, finding Dutch and French methods of horticulture vastly superior at that time to those practised in England. This work covers all aspects of vegetable gardening, beginning with melons and cucumbers (raised together in the same bed) which require hot beds, followed by chapters on ‘artichocks, chardons, and asparagus’, ‘cabbages and lettuce of all sorts’, ‘roots’ including beets, carrots and parsnips, leafy vegetables such as sorrel, endive and spinach, ’beans, peas and other pulses’ and ‘odoriferous plants’ such as onions, garlic and leek. The plate shows the preparation of a new garden, including attaching trellis to the walls for training fruit trees. 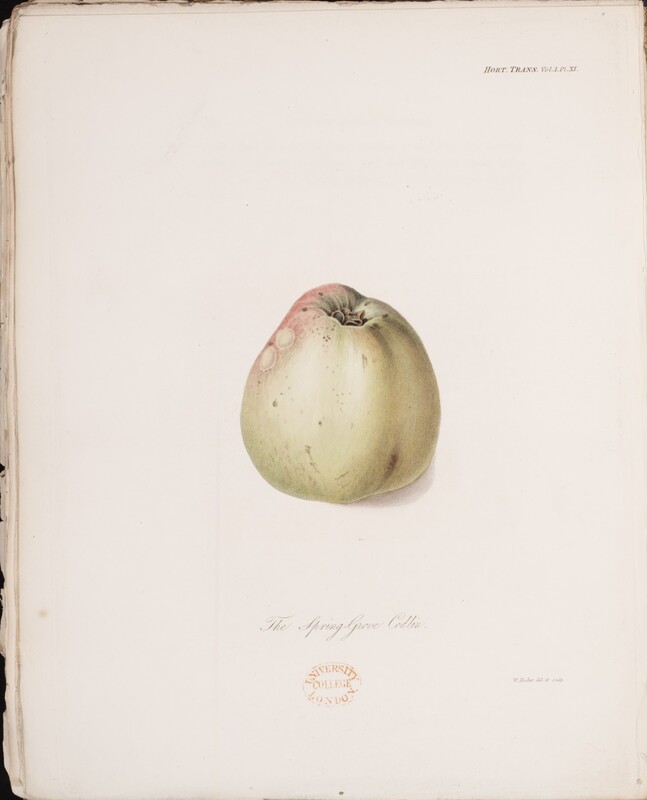 As early as 1826 the Society had issued a catalogue of fruit grown at their Chiswick gardens, listing 3,825 cultivars. In 1883 the National Apple Congress held at Chiswick included 10,140 exhibits with an astounding 1,545 distinct cultivars on display. Many examples of new and improved varieties of fruit are depicted in the ﬁrst series of the Society’s Transactions. These were elaborate publications, with full-page hand-coloured plates. The Spring Grove Codlin, developed by Thomas Andrew Knight, is described by Banks as an early apple, ripening in July, but with the ﬂavour of the best winter apples. The plate is by William Jackson Hooker. 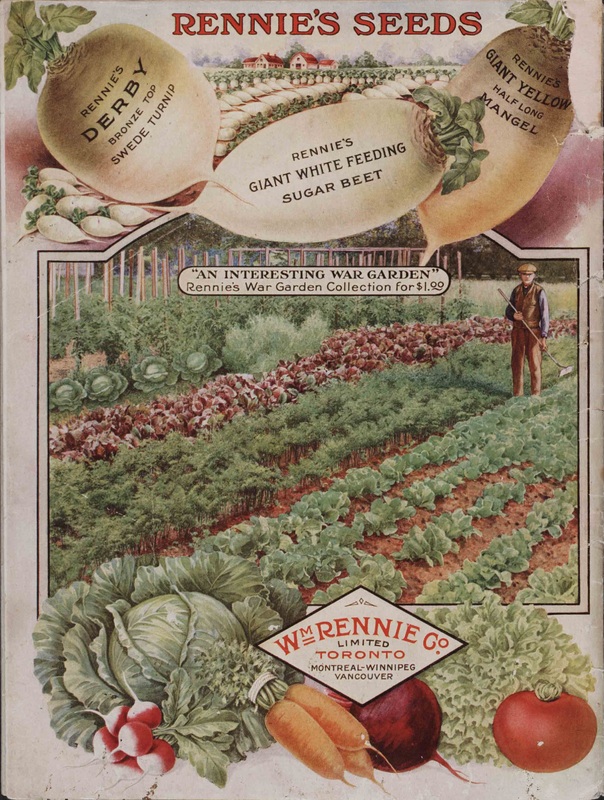 Gardeners in both Britain and Canada contributed to the war effort during both world wars by increasing the quantity of home grown food. Nurseries also contributed to the cause, with advice and special offers on vegetable seeds. William Rennie (1835-1910) founded his seed company in Toronto in 1870 later expanding to Montreal, Winnipeg, and Vancouver and becoming the country’s largest seed merchant. In their 1918 catalogue Rennie’s promoted vegetable gardening as the duty of ‘every loyal Canadian’, stating ‘We cannot all shoulder a gun, but most of us can handle a spade’. On the back cover of their 1918 catalogue they advertised their ‘war garden collection’ for just $1.00. They offered several different versions, including an early collection, a northern collection, and a small garden collection. The complete collection included beans, beet, cabbage, corn, cucumber, lettuce, turnip, onion, parsnip, peas, radish, squash and tomato. Also shown is their 1914 catalogue, and a 1911 Simmer’s catalogue.

Some of the earliest works on ﬂowers were those written by or for ﬂorists (gardeners who grew individual specimens for show) and these are included in the section on ﬂower shows later in the exhibition. The literature on ﬂower gardening per se did not become extensive until the late nineteenth century, and then continued to predominate throughout much of the twentieth century. The choice of ﬂowering plant material available to British gardeners from their own ﬂora prior to the sixteenth centurywas quite limited, and a satisfactory display was possible only in spring and early summer. In fact, in order to avoid having empty beds for a large part of the year and provide colour for a longer period, many of these early elaborate formal designs were made with coloured sand, gravel or other non-plant material. In 1683 in the second edition of his Systema Horti-culturae John Worlidge (ﬂ. 1669–1698) lamented the loss of the ﬂower garden and its replacement with ‘gravel walks and grass-plots’ which ‘have banish’d out of their gardens ﬂowers, the miracles of nature, and the best ornaments that ever were discovered to make a seat pleasant’. While ﬂowers did not disappear entirely from gardens and there were always individual passionate gardeners and collectors who devoted themselves solely to ﬂowers, by the early eighteenth century the formal ﬂower garden no longer held pride of place below the main façade of the country house. The landscape movement for which Britain is still justly renowned created extensive green parks around the house which, while rigorously planned and maintained, gave the appearance of a natural landscape extending outwards. This was a great contrast and departure from the inward-looking garden laid out in formal straight lines and patterns which had prevailed until then. In his History of the Modern Taste in Gardening, Horace Walpole (1717–1797) summed up this development when he famously said of landscape designer William Kent (1685–1748) that ‘He leapt the garden fence and saw that all nature was a garden.' 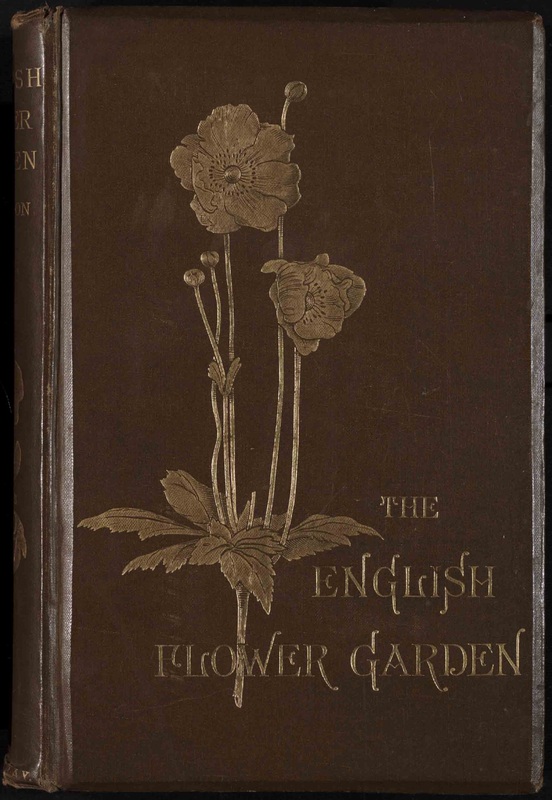 William Robinson resigned his post as gardener with the Royal Botanic Society to devote himself to horticultural writing, producing many important books and magazines on ornamental gardening. Throughout his life he championed the use of hardy flowers that could be grown in the open rather than the tender greenhouse plants used so extensively by the Victorians. The work for which he is best known, and which was hugely influential for at least the next half century was The English Flower Garden, first published in 1883. In the introduction he sums up his approach to flower gardening: ‘I hope to prove that the true way to happiest design is not to have any stereotyped style for all flower gardens, but that the best kind of garden grows out of the situation as the primrose grows out of a cool bank’. His overall philosophy still prevails today – to place plants under conditions where they will naturally thrive, and to mix native and exotic plants needing similar conditions to produce an informal ever-changing display. 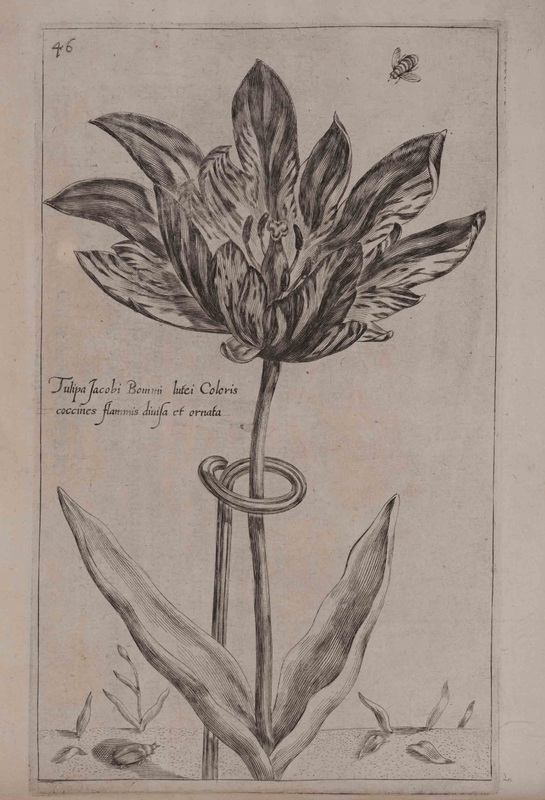 In addition to general works on both annual and perennial flowers there is a huge literature devoted to the cultivation of individual species. Tulips have long been highly coveted, and were the most desirable and fashionable of flowers in European gardens during the first half of the seventeenth century. The varieties depicted by artist Crispijn de Passe reflected the passion for ‘broken’ tulips, meaning blooms which are bi-coloured – for example delicately feathered and flamed in rose red on a white base. In this plate  the tulip is named for a Haarlem grower, Jacob Bom, and is shown supported by a type of plant stake still in common use today. 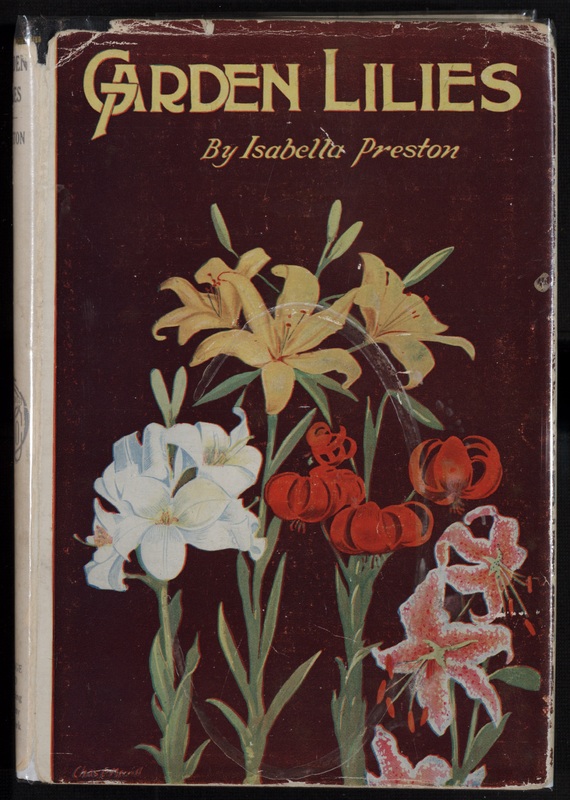 Isabella Preston was already well known as a lily breeder by the time she joined the staff of the Ottawa Experimental Farm in 1920 as their ‘specialist in Ornamental Gardening’. Her research on lilies continued throughout her life, even after she retired from her government position.

Shrubs and trees are deﬁned as perennial plants which have rigid woody parts that persist from year to year and season to season. Many of our most cherished ﬂowers including roses, rhododendrons, lilacs and magnolias are classed as shrubs, and garden trees are valued for their ﬂowers, leaf shape and colour, fruit and bark as well as their overall form. Trees and shrubs contribute structure to the garden, supplying both vertical and horizontal elements that deﬁne the space. There is a vast literature on the subject, but the earliest works were those dealing with forest rather than ornamental trees. Evelyn’s landmark book, Sylva; or, A Discourse of Forest-Trees, and the Propagation of Timber in His Majesties Dominions was highly inﬂuential for more than a century, with four editions published in his lifetime, followed by a new illustrated edition with notes by Alexander Hunter (1729– 1809) in 1776. 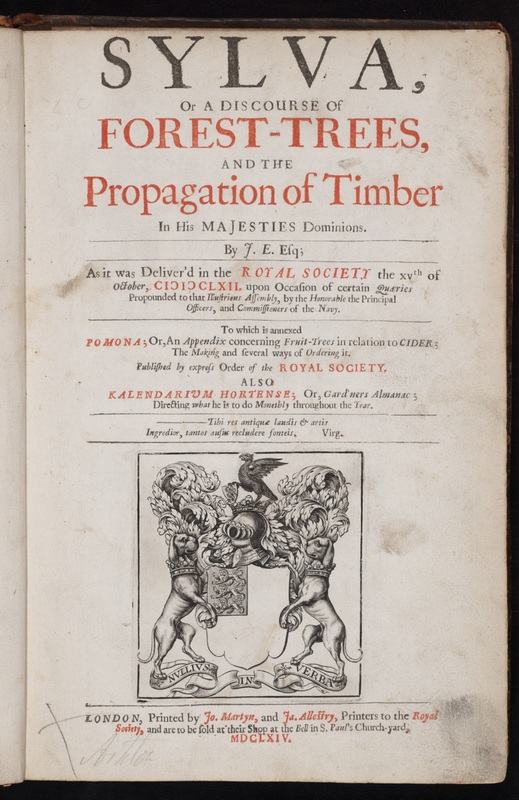 The earliest works on trees were those dealing with forest rather than ornamental trees. Evelyn’s landmark book, Sylva was highly influential for more than a century, with four editions published in his lifetime. Commissioned by the Royal Society, it was written to promote the planting of forest trees following the devastation of the Civil War. Evelyn successfully made the economic argument for landowners to plant and professionally manage tracts of forests on their estates. 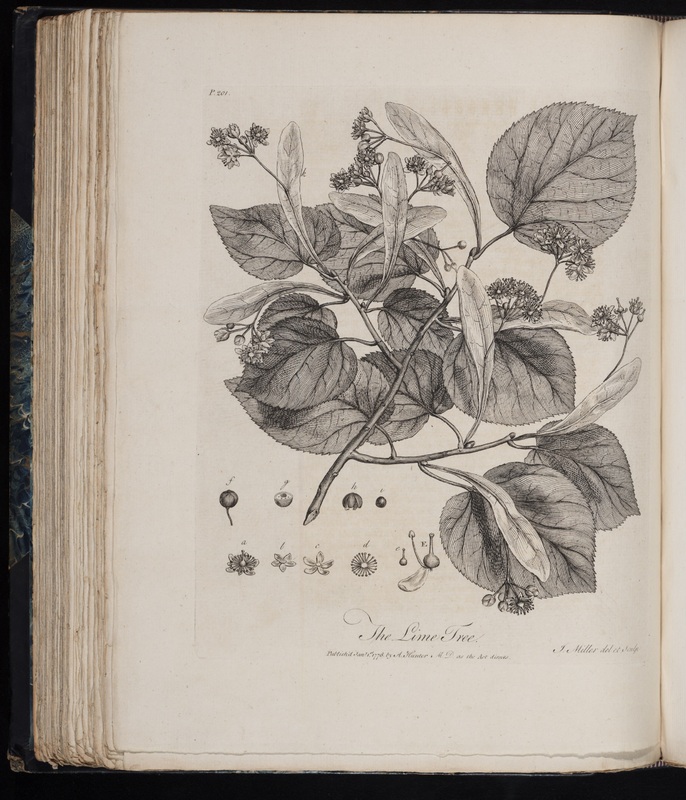 By the 1770s when Hunter’s edition of Sylva appeared there was a need for updated information on many species, and Hunter’s notes sometimes take up more space on the page than Evelyn’s original text. Hunter’s edition was illustrated, and many of the plates are by the botanical artist and engraver John Miller (1715-c.1790). The plate on display is of the lime tree, also known as linden or basswood. The lime tree had been cultivated in Britain before 1400, but a form of lime with smaller leaves (Tilia x europaea) had been introduced in the seventeenth century which was widely used for lining the walks and avenues of British country estates.