The most structured way of observing plants is in a botanical garden where similar plants are grown and displayed together, often arranged by plant families, and labelled for easy reference. Botanical gardens provide the public with a venue to study both native and introduced garden plants, to see them growing in actual garden or natural settings, and to study a particular genus in detail. The great age of plant discovery that began in the sixteenth centurywith the exploration of the Americas triggered an interest in the scientiﬁc study and classiﬁcation of plants. The plants and seeds which made their way to Europe were cultivated with a view to determining their potential uses. At ﬁrst this was chieﬂy to ascertain their medical properties, and the great botanical gardens founded in the sixteenth century at Padua, Leiden andMontpellier were attached to medical schools, giving students the opportunity for detailed examination of living plants.

The Hortus Botanicus in the Dutch town of Leiden was established soon after the founding of the university in 1575. The ﬁrst prefect of the garden was the distinguished Charles de l’Ecluse (1526–1609) or Clusius, who had a wide network of correspondents across Europe and had written extensively on botanical subjects. In 1593 he brought with him from Frankfurt a great number of seeds, bulbs and plants to form the foundation of the garden, which had about one thousand plants when it ﬁrst opened. Other distinguished botanists associated with the garden were Herman Boerhaave (1668–1738) and Johannes Fredericus Gronovius (1686–1762), an early patron of Linnaeus. Boerhaave produced two catalogues of the plants in the garden, the ﬁrst in 1710 and the second, with many more plants, in 1727. 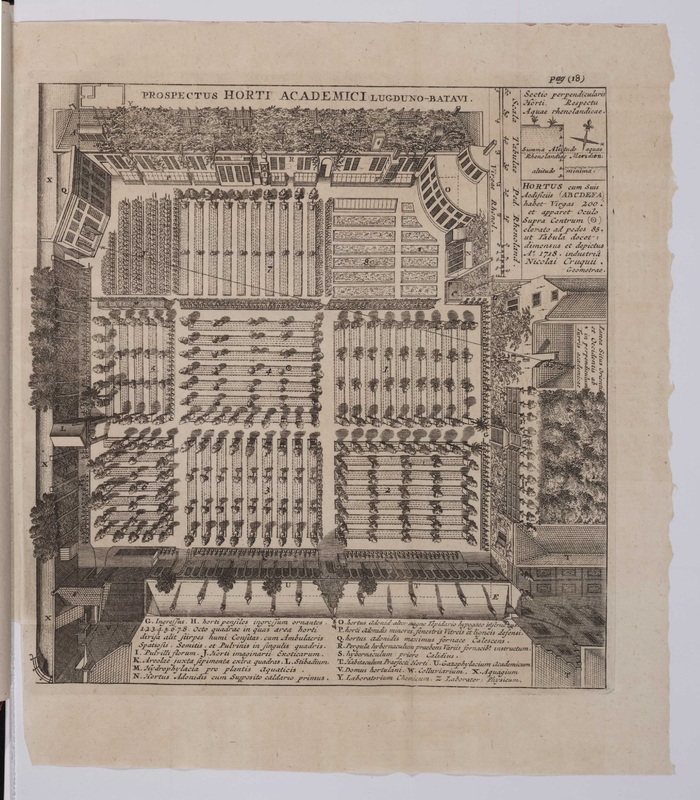 The Hortus Botanicus in the Dutch town of Leiden was established soon after the founding of the university in 1575. The first prefect of the garden was the distinguished Charles de l’Ecluse (1526-1609) who brought with him from Frankfurt a great number of seeds, bulbs and plants to form the foundation of the garden, which had about one thousand plants when it first opened.  Other distinguished botanists associated with the garden were Herman Boerhaave (1668-1738) and Johannes Fredericus Gronovius (1686-1762), an early patron of Linnaeus. Boerhaave produced two catalogues of the plants in the garden, the first in 1710 and the second, with many more plants, in 1727. The plan of the Leiden garden shows that the plants were arranged as individual specimens displayed in a series of rectangular beds grouped according to families. This method facilitated study since plants were grown alongside others to which they were closely related. 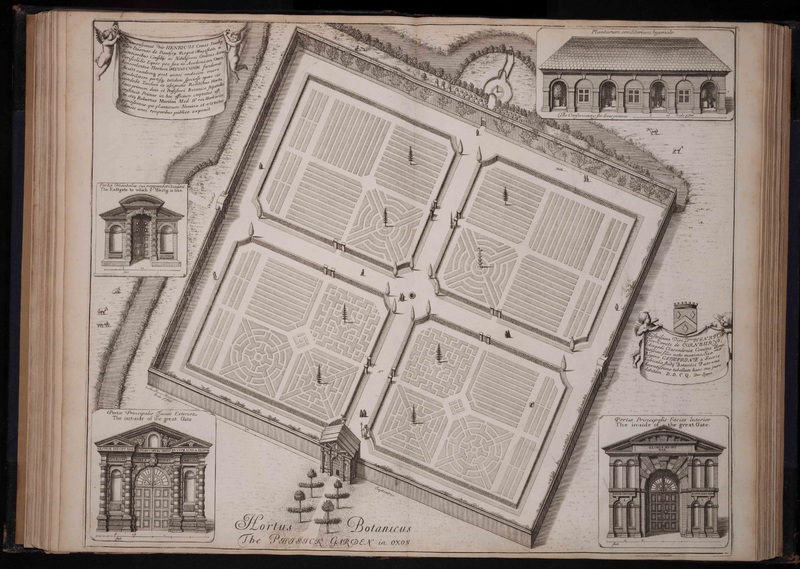 The Oxford Botanic Garden was founded in 1623 by Henry Danvers, later the 1st Earl of Danby (1573-1643), but was not planted until at least a decade later. Danby appointed the German botanist Jacob Bobart (1599-1680) as gardener, who was succeeded by his son, also named Jacob Bobart (1641-1719). The first catalogue, listing some 1400 plants growing in the garden, was published in 1648. The painter and engraver David Loggan included the botanic garden in this volume of plates depicting the buildings of Oxford in birds-eye views. It shows a stylized layout of the garden, divided into four symmetrical quarters, which represented the continents of Europe, Asia, Africa and the Americas. The inset in the top right corner shows the ‘Conservatory for evergreens’, meaning the building used to shelter tender plants such as orange trees over the winter. 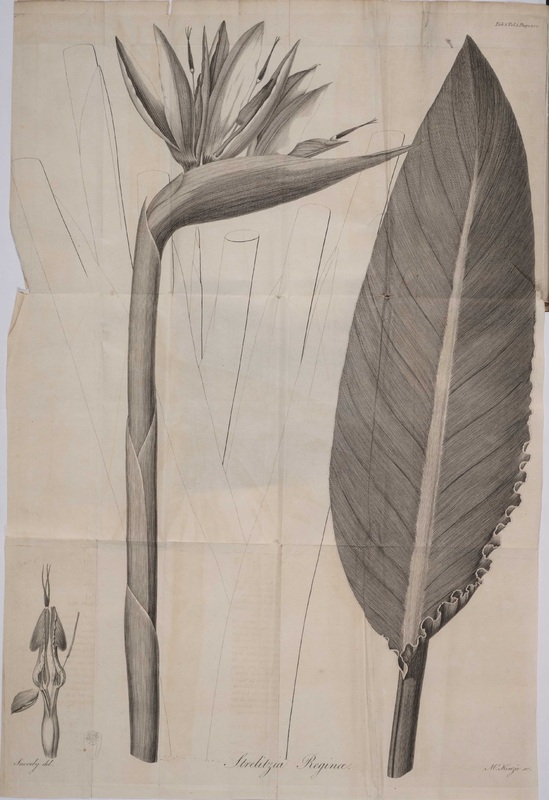 William Aiton (1731-1793). Hortus Kewensis, or, A Catalogue of the Plants Cultivated in the Royal Botanic Garden at Kew. London: George Nicol, 1789.

The great gardens at Kew came to prominence under the leadership of Sir Joseph Banks (1743-1820) and head gardener William Aiton who had trained under Philip Miller (1691-1771) at Chelsea. Aiton produced the first printed catalogue of the gardens at Kew, listing some 5600 species, arranged according to the Linnaean classification. Aiton includes in each plant description the name of the person by whom it was first introduced into England. The catalogue is not illustrated throughout but does include a few large plates of outstanding new flowering plants. Shown here from volume one is the spectacular Bird of Paradise flower (Strelitzia reginae), which was introduced to Britain in 1773 by Joseph Banks from South Africa and first grown at Kew.

There are many other types of gardens, not strictly botanical in intent, but perhaps more aptly named demonstration or horticultural gardens, where plants are trialed, or which specialize in single families or species of plants grown for garden purposes. In the United Kingdom there is a formalized arrangement, the Plant Heritage National Plant Collection scheme, whereby some public and private gardens take on the responsibility to document, develop and preserve a comprehensive collection of one group of cultivated plants in trust for the future. The establishment of designated reference collections of plants open to the public creates a rich resource for home and professional gardeners by gathering together all the species and cultivars within particular genera or deﬁned groups. There are nowmore than 650 such collections, eleven devoted speciﬁcally to diﬀerent types of hostas alone. For example the national collection of Hemerocallis Spider and Unusual Forms is held by the proprietor of a specialist nursery, the national collection of Alchemilla is held at the Cambridge University Botanic Garden, while the national collection of over thirty named varieties ofMulberry are held on the Royal Estate in the gardens at Buckingham Palace, Kensington Palace and Marlborough House. 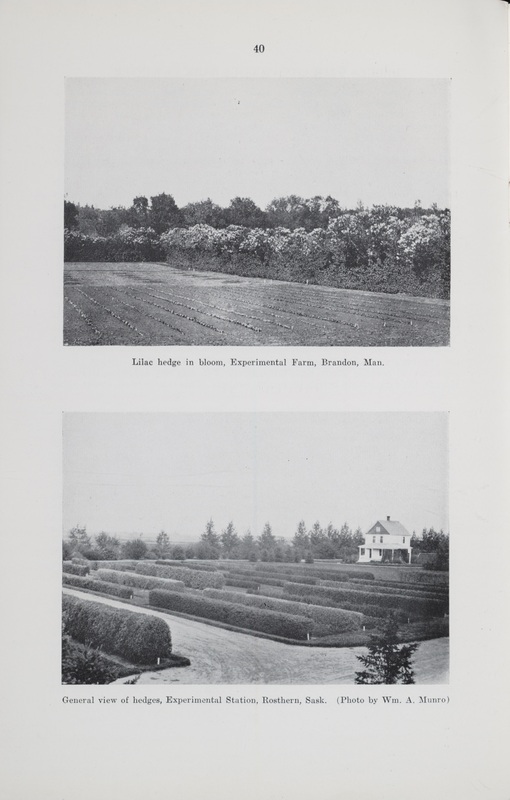 W.T. Macoun (1869-1933). Hedges and their Uses with Notes on Trees and Shrubs Tested for Hedge Purposes at The Central Experimental Farm, Ottawa and Lists of Best Hedges at the Branch Experimental Stations. Ottawa: Department of Agriculture, 1931.

In Canada, an unusual opportunity to view plants was afforded by the system of experimental farms set up by the federal government beginning in 1886. At the  Ottawa farm a horticultural division was established under the leadership of W.T. Macoun, whose mandate was to develop strains of plants that could withstand the Canadian climate. This pamphlet provides a concise but comprehensive coverage of hedges, their uses and care, for all parts of the country. The collection of hedges was begun in 1889 and by 1931, at the time of publication, 136 species and varieties of trees and shrubs had been tested at the Ottawa location and others throughout the country, ‘giving inspiration to plant hedges, and guidance as to what to plant, to the many visitors visiting these Stations’. The sample hedges were generally fifty feet long, and included both deciduous and evergreen trees and shrubs.

The park open to the general public for recreational purposes grew out of nineteenth century populist and democratic values, and the notion of the moral or transformative power of the natural world. One of the ﬁrst parks to be ﬁnanced with public funds, Birkenhead Park, was designed by Joseph Paxton beginning in 1843, and included plantings of trees, two lakes and a network of walking paths separated from the main drives.Manhattan’s Central Park designed by Frederick Law Olmsted (1822–1903) is said to have been inspired by Olmsted’s visit to Birkenhead in 1850. By the end of the century the movement had caught on and most industrial cities in Britain had a public park. The great urban parks of Canada such as Montreal’s Mount Royal (also partly designed by Olmsted), High Park in Toronto, and Stanley Park inVancouver stem from this same tradition. City parks provide a green haven within a densely populated area, and generally include many features other than plants, such as picnic areas, playing ﬁelds, playgrounds and other sports and recreational facilities for children and adults. However, many parks are of horticultural interest as theymay include areas of professionally designed and maintained ornamental garden beds and ﬂoral displays, as well as an opportunity to view mature trees or rare or unusual trees and shrubs. 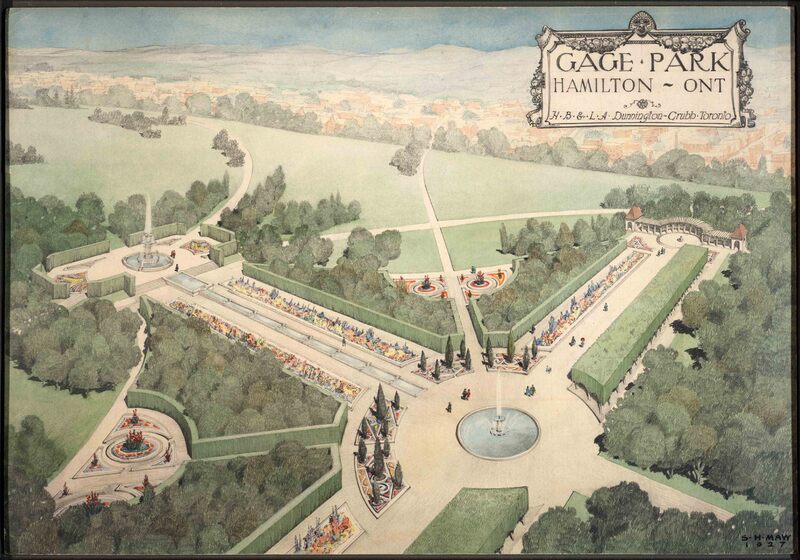 The City of Hamilton purchased sixty-four acres of the land which is now Gage Park from Robert Gage in 1917. The property was developed in the 1920s when formal gardens were laid out, and tennis courts, a greenhouse and lawn bowling facilities were added later. The park was famous for its rose garden, designed and laid out in 1924. 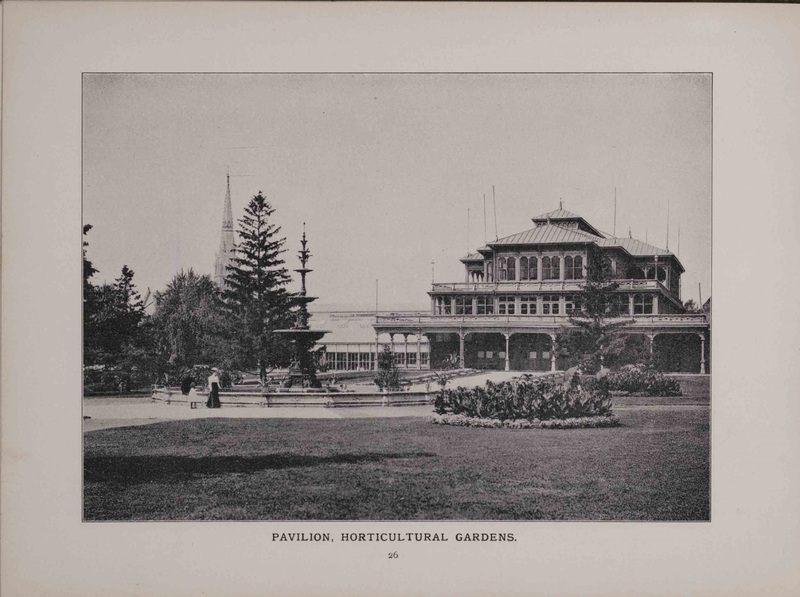 Travellers have always commented on gardens as one of the features of the places being visited. During his extensive travels the poet and antiquary John Leland (c. 1503–1552) described minutely almost every corner of England, and commented on gardens long since lost. When visiting Wressle Castle in Yorkshire, built in the 1380s and 1390s, he noted that the gardens within the moat and the orchards outside were ‘excedingly fair’, and described the garden mount ‘writhen about with Degrees like Turninges of Cockilshilles’, with a view to the river Derwent below.

The ruined gardens of classical Rome were an inspiration to the garden-makers of the Italian Renaissance, and the Renaissance gardens in turn inspired the tourists of northern Europe making the rounds during the heyday of the Grand Tour in the eighteenth century. Richard Boyle, the 3rd Earl of Burlington (1694–1753) returned from his second tour in 1719 with the architect William Kent. They worked together to design a villa and gardens at Chiswick, inspired by places they had seen on their travels, such as Hadrian’s Villa Adriana at Tivoli. The Chiswick property included a ﬂower garden and orchard, but what we now call hardscaping - garden buildings, statues, columns and gateways - were the dominant features rather than the plants.

Robert Castell. The Villas of the Ancients Illustrated. London: Printed for the author, 1728.

This lavish folio volume byRobert Castell (d. 1729) includes texts and translations from Varro, Columella,Virgil and Pliny the younger. The Roman agricultural writers continued to be inﬂuential for their practical advice, and Virgil and Pliny were a source of inspiration for garden design, both in the Italian Renaissance and in early seventeenth centuryBritish gardens. Castell drew detailed plans of Pliny’s villas and their surrounding gardens, at Laurentinum and at Tuscum, reconstructing them from the descriptions in Pliny’s letters, but interpreting them through the sensibilities of his own time. The volume is dedicated to Burlington. 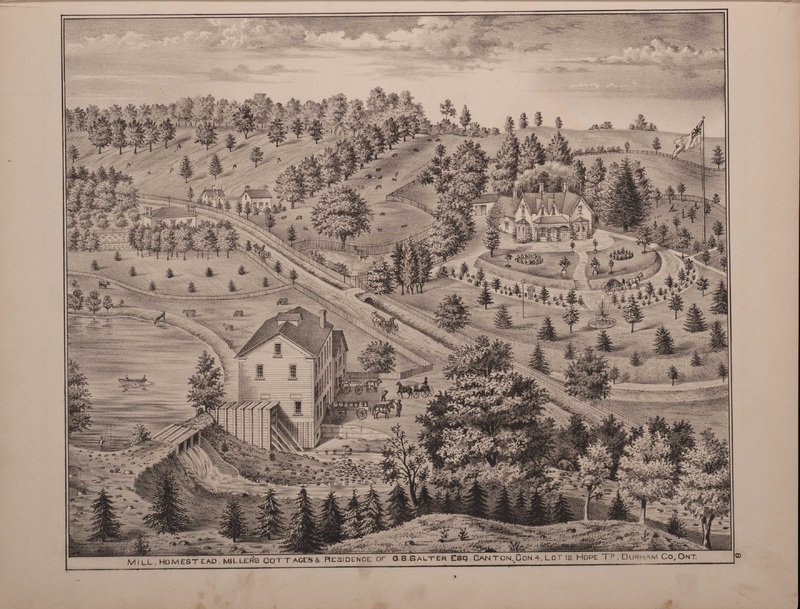 Illustrated volumes with detailed maps of counties in the Maritimes, Ontario and Quebec were popular in nineteenth century Canada. Known as county atlases, they were sold by subscription and some of the subscribers paid a premium to have detailed views of their residences included, which often featured the surrounding gardens. This plate of the country residence of G.B.Salter in Hope Township, Durham County shows the house with quite sophisticated plantings of flower beds, a fountain and formal semi-circular groupings of trees in the front, and more naturalised clumps of trees in the background. 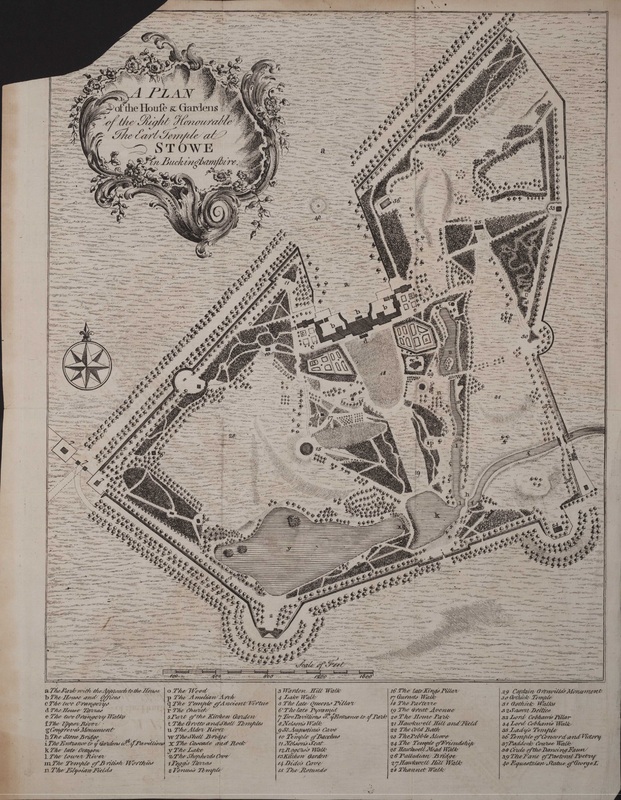 The practice of opening a private garden to the public at designated times, often when the family was not in residence, became common in the eighteenth century, and some of the most popular sites began to publish guidebooks. In 1732 Gilbert West (1703-1756) had published a long poem praising the garden at Stowe, but the first true guidebook was published in 1744, with a third edition by 1746.  Guidebooks to Stowe have continued to be published subsequently, in many different editions and formats. In this volume the description of the garden, including its many statues and ornaments, takes up the bulk of the work, with less than ten pages being devoted to the house.